7 Barcelona-Based Musicians You Should Know 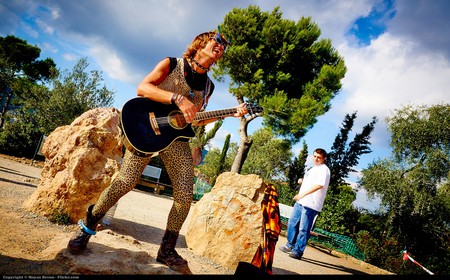 Every culture has its own musical vibe. History and cultural heritage are reflected in work of art created by local musicians. Barcelona brings us an amazingly diverse music scene that includes many interesting alternative bands, as well as spectacular traditional ensembles. Discover these local artists and start listening your way to Barcelona.

The relatively young Spanish music group Blaumut writes songs combining pop and folk music using various classical instruments, like the cello and the violin. In 2009 they started of with three band members, and a few years later they added another two musicians to the party. Their lyrics provide us with lively images. Their latest album,which is said to be a more mature album was named after this song.

Naturally, a Barcelona based Spanish indie pop and hip hop band had one of their music video’s shot in their hometown. Follow the artists of Delafé y las Flores Azules on video tour through the Gothic Quarter and enjoy their crafty vibes. The band Delafé y las Flores Azules writes songs with poetic lyrics. They found a way to express criticism in a positive and inspiring way, focusing on nationally unspoken topics. Find out more about this by listening to their repertoire.

Shibuya-kei, a subgenre of Japanese pop music, originated in the Shibuya district of Tokyo. It’s an exciting mix between synthesizer-pop, pop and sometimes even jazz. Listen to the Spanish indie pop band La Casa Azul and you immediately know what this style should sound like. They combine the best sounds from 1970s European disco-pop, like ABBA, with 1960s American pop, like the Beach Boys. Cheerful songs from a band that originated from Barcelona.

The Unfinished Sympathy – Spin In The Rye

Obviously, Barcelona has a lot to offer. Like a great variety of musical styles and artists, The Unfinished Sympathy is a Barcelona based modern rock band. They come from emotional punk and serve their sounds with a touch of 1980s pop. They’re not only one of the most popular rock bands in Spain, they have a successful international career as well.

The lead-singer of Jarabe De Palo, Pau Donés, already was a singer-songwriter before it became the current day musical trend. The band has been together since 1996, and La Flaca is a song from their first album. Just listening to the intro makes you want to be in Barcelona, enjoying a relaxed day in the sun. Last year, in 2015, their tour through the United States was canceled because Pau Donés was diagnosed with cancer.

Gertrudis is Barcelona’s very own rumba catalana band. This music genre originates from the city and its surrounding region, Catalonia. This rhythmic music style developed in the mid 20th century from flamenco and Cuban sounds. Gertrudis picked up the style and made it their life purpose. After a short break the group reunited and started on a new musical journey worth joining. Listen to the rumba catalana by this beloved Barcelona based band.

Funky psychedelic folk sounds, that’s what the Mandalas used in their best album Hydra Rising. A shockingly good combination of acoustic and electronic music from a Barcelona based band. Barbarella On Acid is one of the enjoyable songs of their notable album. The city’s alternative music scene brings forth highly entertaining and energizing soundtracks.