16 Unusual Things to Do in Valencia, Spain 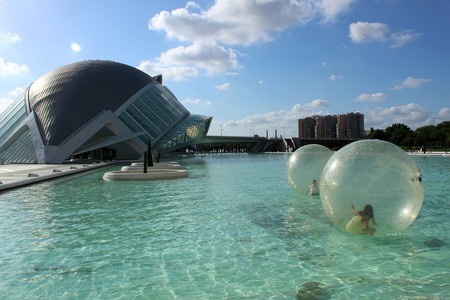 The City of Arts and Sciences, Valencia. Photo @ Pixabay

After a couple of days in Valencia, you’ve probably seen all the top sights – the Cathedral, the City of Arts and Sciences, the beach, and maybe a few of the top foodie destinations in the city. And after you’ve ticked off all the big (and very worthwhile) sights, don’t be afraid to go off the beaten path and explore some of the more unusual things to do. Valencia might be a small city, but it packs in a surprising amount to see and do. Don’t believe us? Read on for Culture Trip’s round-up of some of the more unusual things to check out around town.

One of Valencia’s most striking and unique features is not a piece of architecture or a natural wonder, but the incredible art murals lining the walls of the bohemian El Carmen district. Colorful and vibrant, this is no quick aerosol can job, but takes hours of painstaking work by local artists using mixed media. Some murals change fairly frequently, others become a longer-term part of the area’s charm. See huge murals around Plaça del Tossal and in the open space around Carrer d’En Gordo, with its abandoned, crumbling buildings adorned with the work of local street artists. 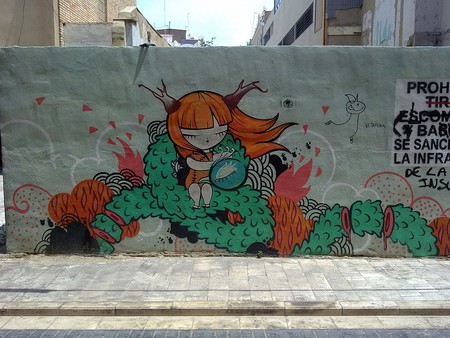 Valencia’s main festival is now gaining international recognition after getting a UNESCO heritage award last year – and what a party it is. For two weeks in March the streets are scented with gunpowder and the smell of frying churros. Las Fallas takes the city all year to prepare for, not just organizing the events, including incredible daily firework displays, but the creation of hundreds of fantastical figures reaching more than 30 feet (nine meters) high to be placed in the streets – and finally burned – during the festival. The festival’s international slogan is “Feel the Fallas” – appropriately, as the festival can barely be described in words and pictures do it little justice. You simply have to come to Valencia in March and experience it for yourself. And once you do, you’ll have a very good idea of what Valencia and its people are all about. 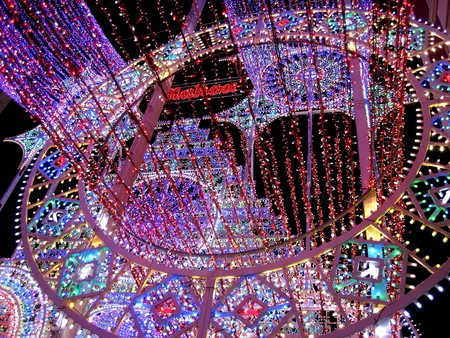 La Fallas, Valencia: you have to see it to believe it | © Pixabay

From the strong smell of gunpowder and the near-constant explosions, large and small, going on all around you, day and night, you might think you’ve arrived in a war zone if you come to Valencia in March. But don’t worry, it’s just the city announcing that the Las Fallas festival is around the corner, with a couple of weeks of constant fireworks both in the streets and in spectacular organized public displays. At 2PM each day people gather in the central square, Plaza del Ayuntamiento, for the daily mascleta. Hundreds of huge firecrackers go off in carefully choreographed rhythm, heralding the imminent arrival of the most important dates in the city’s calendar, giving everyone around temporary hearing loss. Why have a firework display in broad daylight, you ask. Because it’s all about the noise, and feeling the power of up to half a metric ton of gunpowder shaking the city’s foundations.

If you’ve ever wanted to go to the famous tomato fight, now’s your chance because it’s right here in a small town next to Valencia. At the end of August every year, thousands of visitors descend to take part in what must be one of the most famously crazy festivals in the world. In fact, it’s just one of Valencia’s many crazy festivals. 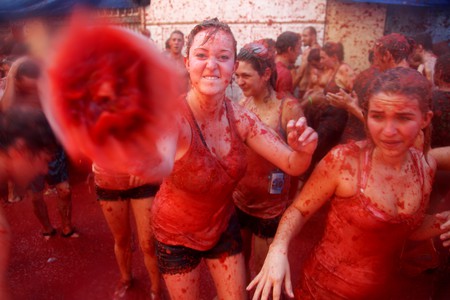 Visit the “House of Cats”

Another quirky find in El Carmen. On the historic Carrer del Museu at the northern end of the Old Town, look down and you’ll spot the façade of a tiny house embedded in the blue wall. Just a couple of feet high, it’s a miniature version of a classically Valencian house, complete with tiled roof, tiny fountain and a potted plant representing the garden. As for how it got there, no one really knows, but locally it’s called the “Casa del los gatos” (House of Cats) and people say it was built by a woman who used to live in the building for the many stray cats in the area.

Visit the monks who still live at the Colegio del Patriarca (or Seminario del Corpus Christi) and on entering the church you’ll spot one of the stranger decorations you’ll have ever seen in a religious building – a stuffed crocodile known as the “Dragon of the Patriarch” that keeps watch over the entrance from its unexpected position, mounted on the wall over the holy water basin. No one quite knows how it got there, but it was probably a souvenir brought back from an early Spanish expedition to Peru.

Whether you’re actually interested in science or not, the fun, interactive exhibitions at Valencia’s Science Museum, part of the City of Arts and Sciences, will definitely grab your attention. From explosions to cutting-edge technology, there isn’t a dull moment at this exhibition housed inside a suitably futuristic building. The City of Arts and Sciences complex also organizes events, from music festivals to the occasional hiring out of water-walking zorb balls, so check their website to find out what’s on. 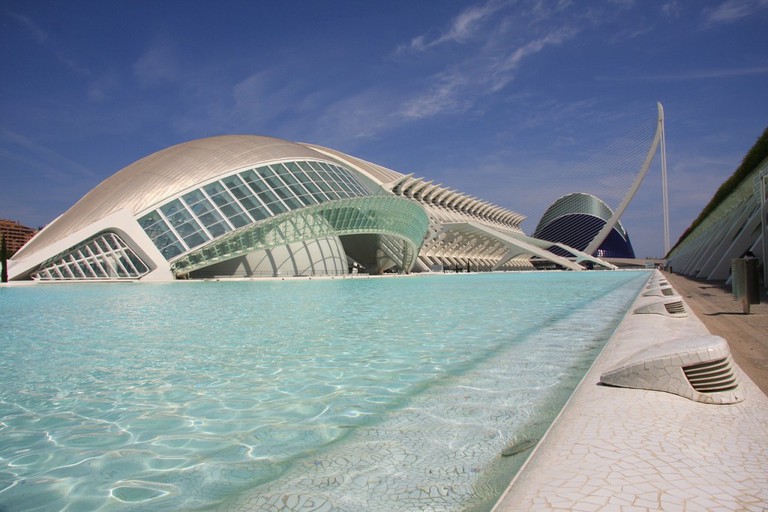 The City of Arts and Sciences in Valencia © Pixabay

OK, not really, but this is as close as it gets. The aquarium at the City of Arts and Sciences has plenty of cool features, including an “underwater” restaurant where you can dine surrounded on all sides by exotic sealife. When you enter the restaurant you’ll see incredible tropical fish, stingrays and sharks swimming around you. You might feel guilty for ordering the catch of the day, though.

Eat in a bookshop

If you’d rather be surrounded by literature than live sea creatures, then skip the aquarium and head for cosy Ubik Café in the lively district of Ruzafa. There’s no better place in town for book lovers, as this bookstore – with a bar – stocks various languages and genres, and you can browse before, after or during a drink or a meal with plenty of healthy and veggie options.

Valencia’s alternative side comes out at night in the El Carmen neighborhood. Join the young, alternative crowd at the chaotic Frankenstein rock bar or eclectic Bigornia, with a mix of everything from electronica to hip hop – just so long as it’s not mainstream, it’s cool.

It seems like almost every city claims to be home to the narrowest house or building in the country, or continent. Valencia’s contender is said to be the narrowest building in Spain, as well as one of the narrowest in the world, and is only slightly wider than its front door. Though the façade remains tiny, inside the upper floors have been connected to the adjoining buildings to make more normal-sized flats. The entrance is now part of the tapas bar La Estrecha, which keeps the original floor and a collection of historic photos of the building. 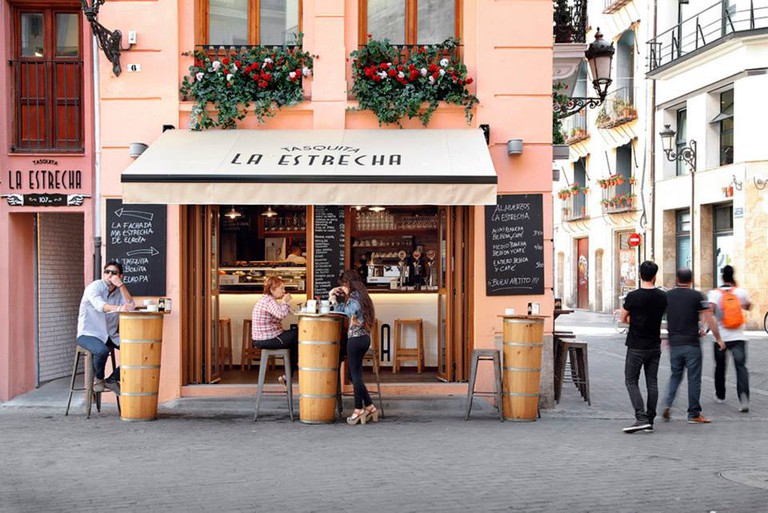 What better way could there be to see the dramatic mountain ranges and miles of lush market gardens (or huerta) surrounding Valencia than from a hot air balloon? There are several companies offering flights by hot air balloon in the region, including flights over the stunning Serra Mariola mountains, near the coast between Valencia and Alicante.

Yoga in the park

Valencia’s locals live outside in the summer, and the winding Turia park, a former riverbed, is everyone’s back garden. People come here to run, cycle, practice their dance steps and take part in all kinds of organized exercise classes, from CrossFit to Tai Chi. Whatever your workout, take it outdoors if your trip is during the summer months. If yoga is your thing, you can roll out your mat on the grass. Look out for posters in the park advertizing group classes, or try joining a class through meetup.com.

Everyone knows the tale of Gulliver’s Travels, in which the giant Gulliver is tied down by the people of Liliput, who then climb all over him. Valencia’s famous and surreal Gulliver Park playground recreates this scene with a giant sleeping model Gulliver, featuring ramps and hidden stairways in the folds of his (concrete) clothes and making long slides out of strands of his hair. It’s a super cool day out for families, and you’ll be pleased to know that adults are allowed to join in the fun, too.

Valencian waiters think most tourists are too squeamish to try this particular local delicacy, found at every market and tapas bar in town. Snails are also one of the ingredients in the traditional Paella Valenciana recipe, along with chicken and rabbit, so if you want to try the real deal make sure to ask your waiter to include the caracoles when you visit one of Valencia’s great paella restaurants.

Seeing the actual Holy Grail up close has got to be a pretty unusual experience. There are of course countless contenders for the title of Holy Grail all around the world, from stone cups to golden chalices, and the questions of whether the cup even exists and, if so, where it is, have fascinated people for centuries. Valencia’s claim to the title looks pretty convincing. The Holy Chalice of Valencia is kept behind glass in the golden “Chapel of the Holy Grail” in the city’s Gothic cathedral.