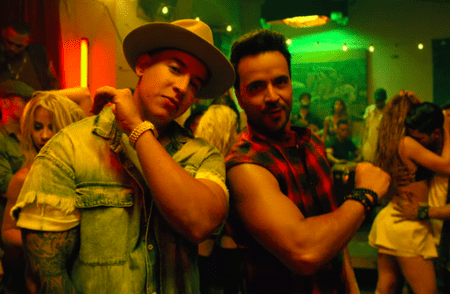 ‘Despacito‘ might have some creepy lyrics when translated into English (Luis Fonsi’s seduction technique seems to involve “breathing on your neck slowly” and “signing the walls of your labyrinth and make your whole body a manuscript”. REALLY?) but there’s no denying this breezy fusion of Spanish guitar and dembow-lite rhythm is the sound of summer 2017.

At the time of writing, the hook-up between reggaeton swagmeister Daddy Yankee, Puerto Rican crooner Luis Fonsi and Justin Bieber has notched up ten weeks at number one in the US and nine weeks in the UK. But what’s truly remarkable about ‘Despacito’s’ success is that such chart-slaying mega-hits aren’t usually sung in another language (even Biebs himself seems to have struggled with the Spanish vocab, shouting the word “Dorito” when forgetting the lyrics).

Spanish language songs might make rare cameos in the charts but when they do strike, it’s often with an El Niño like force. From ‘Feliz Navidad‘ to ‘Macarena‘ (yes, we had to include it), here are some of the most momentous crossover cancións sung in Español…

Ay caramba! No Mexican holiday resort is complete without some dodgy mariachi troupe springing up to warble this mescaline-soaked traditional wedding song.

Originally a posthumous hit for teen singer Ritchie Valens (he perished in the same plane crash as Buddy Holly), it was revived three decades later by Los Angeles Chicano outfit Los Lobos for a biopic of Valens’ life. In the summer of 1987, it hit number one in both the UK and US (where it was the first all-Spanish sung record to hit the top slot).

Enrique’s hairy-chested padre hit number one in the UK with his take on Cole Porter’s ballroom classic in December 1981. At the time, Iglesias was regarded as pure Costa del Cheese: the aural equivalent of a Spanish lothario waiter wooing middle-aged women by softly crooning Latin lingo into their ears while plying them with cheap sangria.

To modern ears, however, ‘Begin the Beguine’ has a proto-Balearic charm, all shimmering guitar riffs, Copacabana catchiness and La Movida disco flourishes. As floaty as a billionaire’s superyacht bobbing around on the Med.

Maybe because it’s the go-to track for TV music supervisors when they want to spice up the salsa section of Strictly Come Dancing, but ‘Bamboléo’s‘ ubiquity has slightly eroded its appeal. But back in the late 1980s, this flurry of flamenco, handclaps and waving-castanets-in-the-air-like-you-just-don’t-care was a massive global hit propelling these slightly portly band of brothers (it’s actually a reworking of a Venezuelan cowboy song made famous by Simon Diaz) into world music superstars.

The Gipsy Kings (who are actually French but with Catalan heritage) have since sold nearly 20 million records, their coffers topped up nicely when Snoopy danced to ‘Bamboléo’ in the recent The Peanuts Movie.

The pinnacle of Nineties naffness or a so-bad-it’s-good classic? Whatever your take, there’s no denying ‘Macarena’s‘ success. In the summer of 1996, it was number one in the US for a staggering 14 weeks, spawning a worldwide dance craze even stiff politicians were forced to shuffle along.

Even stranger, its stars were a pair of middle-aged Spanish entertainers who’d spent 30 years appearing on cheesy TV shows in their home country (they’re now millionaires so wealthy they probably dine on swan paella).

‘Macarena’ remains a big guilty pleasure (apparently Sia’s a fan), with the power to induce arrhythmic hip-shaking and bottom-shaking in tipsy uncles at weddings to this day. Weird fact: the hit version samples both Alison Moyet and 1990s’ Liverpudlian outfit The Farm.

Twelve years before loaning his swagger to ‘Despacito‘, Daddy Yankee opened the reggaeton floodgates with this invigorating grind-a-thon. Credited with furthering the appeal of the genre beyond the barrios of Mr Yankee’s native Puerto Rico, ‘Gasolina’ was a Top 5 hit in the UK during the summer of 2005.

Its appeal still lives on today. Earlier this year, the world was fooled for around five minutes after believing this viral video supposedly showing Thom Yorke belting out the track after too many rum’n’cokes.

Given her penchant for madder-than-a-box-of-dart-frogs lyrics (she felt “abused like a coffee machine in an office”) in ‘She Wolf‘, while ‘Whenever, Wherever‘ saw her congratulating her breasts on being “small and humble so you don’t confuse them with mountains”), Shakira could be warbling about any old Latino cobblers in this reggaeton-with-accordions duet with Spanish singer Alejandro Sanz.

Instead, it’s a relatively straightforward song (well, apart from the bit where Shakira ponders why she “can’t ask an elm tree to bear pears”) about an emotionally torturous relationship. It became the Colombian chanteuse’s biggest Spanish-speaking hit (23 in the US, number one in Hungary) outside Latin America upon its 2005 release.

Like Vanilla Ice if he’d ran through the Pirates of the Caribbean dressing-up box, Gerardo became Ecuador’s biggest musical export since panpipe covers bands when he scored a number seven hit in the US with this “I’m good with the ladies, I am” boast-a-thon in spring 1991.

However, the self-proclaimed “Latin Elvis” proved to be a one-hit wonder (despite Weird Al Yankovic’s reworking ‘Rico Suave‘ as ‘Taco Grande‘) and later became an A&R man who helped nudge Enrique Iglesias into the charts. Gerardo’s now a Christian youth pastor in Kansas City, recently talking about his foot fetish to Rolling Stone magazine here.

The signature tune of Cuban mambo maestro Tito Puente was given a new lease of life with this organ-drenched adaption by bristly-moustachioed Carlos Santana and his band. A top 20 US hit in 1971, it became a Latin rock staple and features more hooks than a piñata superstore.

A Christmas song that’s about as wintry as a poolside piña colada, this was only a hit in the Spanish-speaking world when Puerto Rican troubadour Feliciano first released it in 1970. However, in the digital era, ‘Feliz Navidad‘ has become a present-unwrapping playlist favourite, which is probably why it reached 44 in the US and scraped into the UK charts last Christmas.

It’s been covered by artists such as Michael Bublé (of course), The Glee cast, David Hasselhoff and Ariana Grande, who posted this a capella version with her family.

The song which defined New York City’s boogaloo (a fusion of R&B and mambo) craze of the early 1960s, this compulsive dance-floor number from Harlem-born bandleader Barretto became the first Latin tune to become a Top 20 Billboard hit.

Its street dance video has been viewed a mathematician-troubling 2.2 billion times on YouTube. Meanwhile the Spanglish version of the song (which features bellowing rent-a-dancehall-star Sean Paul) has topped the charts across the globe (it was strangely big in Eastern Europe) and became the first non-English top-10 radio hit since ‘Macarena‘ 20 years ago.

The song itself – about Enrique falling in love with some woman with nifty dance moves – is so sun-soaked, you can practically feel the sweat oozing down your back. As far removed from Enrique’s insipid ‘Hero’ balladeer days as it’s possible to be.

Sadly forgotten garage reworking of a track by Venezuelan salsa king Oscar D’León, this was a top 10 UK hit in summer 2000 (which wasn’t the summer of love, more a solstice of bland Irish boybands, Billy Bass singing fish and panic-petrol buying). With its jaunty Latin chorus, this deserves to be filed alongside Len’s ‘Steal My Sunshine‘ and Sweet Female Attitude’s ‘Flowers‘ as true fin-de-siècle pop classics.

Much-ridiculed UK number one from Spanish family pop group which sold seven million copies and topped the charts in 27 countries. Sounding not unlike unlike some Spanish students mangling Sugarhill Gang’s ‘Rapper’s Delight’ at karaoke, this ditty has sadly nothing to do with tomato sauce.

Instead, it’s about a pimping, magical gypsy called Diego who prowls nightclubs at midnight hoodwinking women he’s a Rastafarian. The musical equivalent of a sorry-looking souvenir sombrero, it proved to be catchier than travellers’ diarrhoea. As for Las Ketchup themselves, they recorded one more album before splitting shortly after representing Spain in 2006’s Eurovision.