12 Secret and Underrated Towns in Spain To Visit in 2018

Pedraza, Spain | © Paul A.- / Flickr
One of the reasons why Spain is such a fascinating country is its abundance of beautiful towns and villages, many of which are well off the beaten tourist track. Below, Culture Trip picks 12 secret and stunning destinations in Spain to visit before the rest of the world discovers them.

Estepona has somehow managed to avoid the tourism-driven changes that have altered so much of Spain’s south coast. Located half an hour’s drive from Marbella, this beautiful little town is one of the Costa del Sol’s undiscovered treasures: its flower-filled streets are some of the most romantic you’ll see anywhere in Andalusia, and it has a lovely (and rarely crowded) beach, too. The place to be for tapas and drinks is the Plaza de las Flores, and the key attraction is the Botanical Garden.

Though frequently named as one of the most attractive towns in Spain, Priego de Córdoba is still very much a place for the off-piste traveller. It is famous for being home to some of the most beautiful Baroque churches in the country, which are scattered throughout the winding, pretty streets of Barrio de la Villa, Priego’s oldest quarter. This centuries-old neighbourhood sits precariously on a clifftop from which you can survey the wild expanses of the Subbéticas National Park. 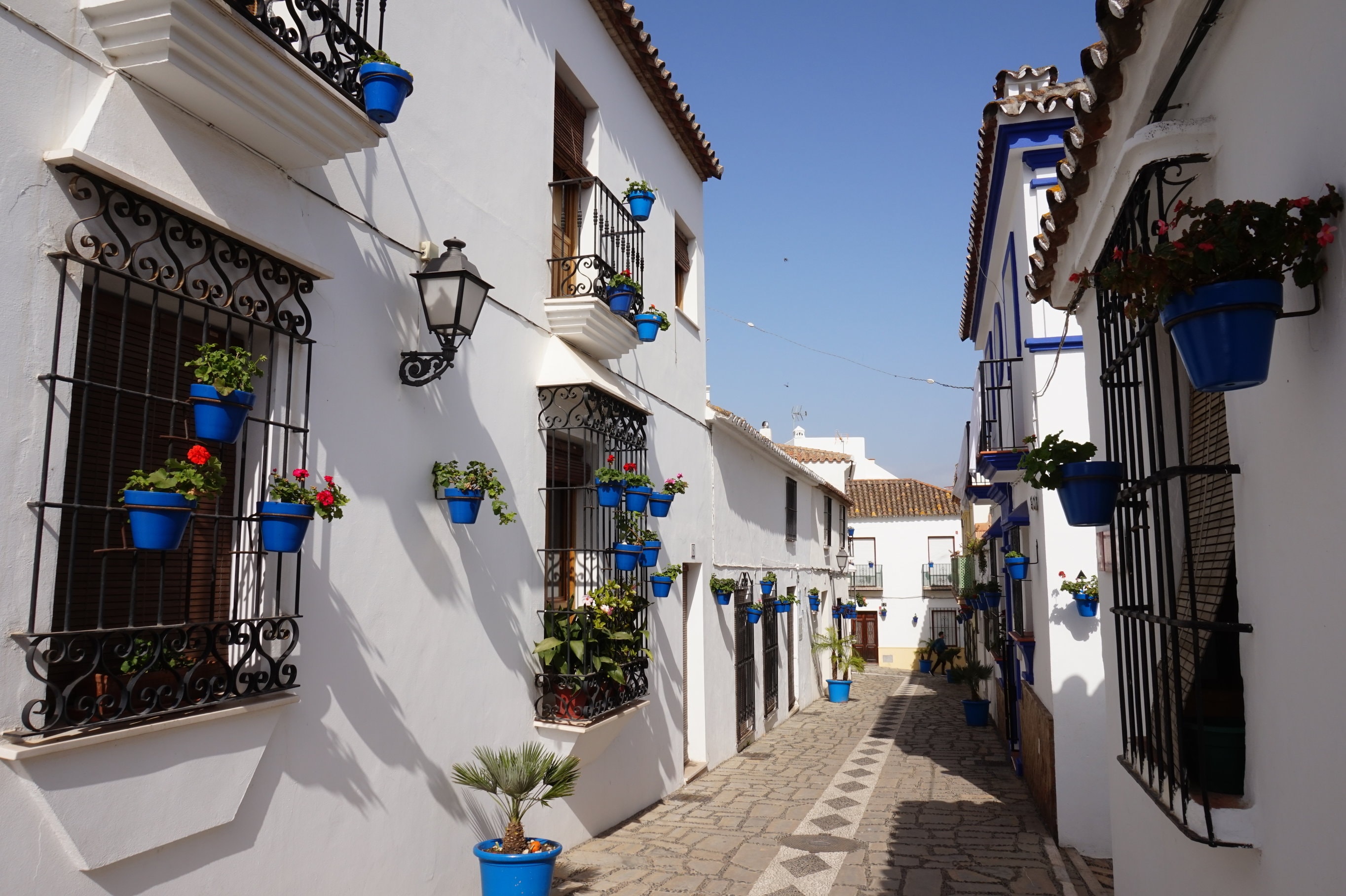 A typical street in Estepona | Courtesy of Encarni Novillo

A walled medieval town an hour north of Madrid, Pedraza is one of central Spain’s best-kept secrets, a place which truly gives you the sensation of being transported back in time. Stone houses with flower-filled little balconies and gnarled wooden doors line the town’s narrow streets; sooner or later, they all end up in the ridiculously attractive Plaza Mayor, which becomes a bullring in the summer. Take a little wooden stool on one of the terraces and admire a square unscathed by the past few hundred years.

The charming whitewashed village of Villanueva de la Concepción is only about a 45-minute drive inland from Málaga, but it’s well off the tourist track. It boasts a spectacular location at the base of El Torcal (the weird karst landscape of which was once the ocean floor), surrounded by rolling fields and olive groves. On a clear day, you can see all the way down to the Mediterranean from its south-facing viewpoints. For superb and amazingly cheap tapas, head to Bar Meson Torfa, where you’re likely to be the only foreigner. 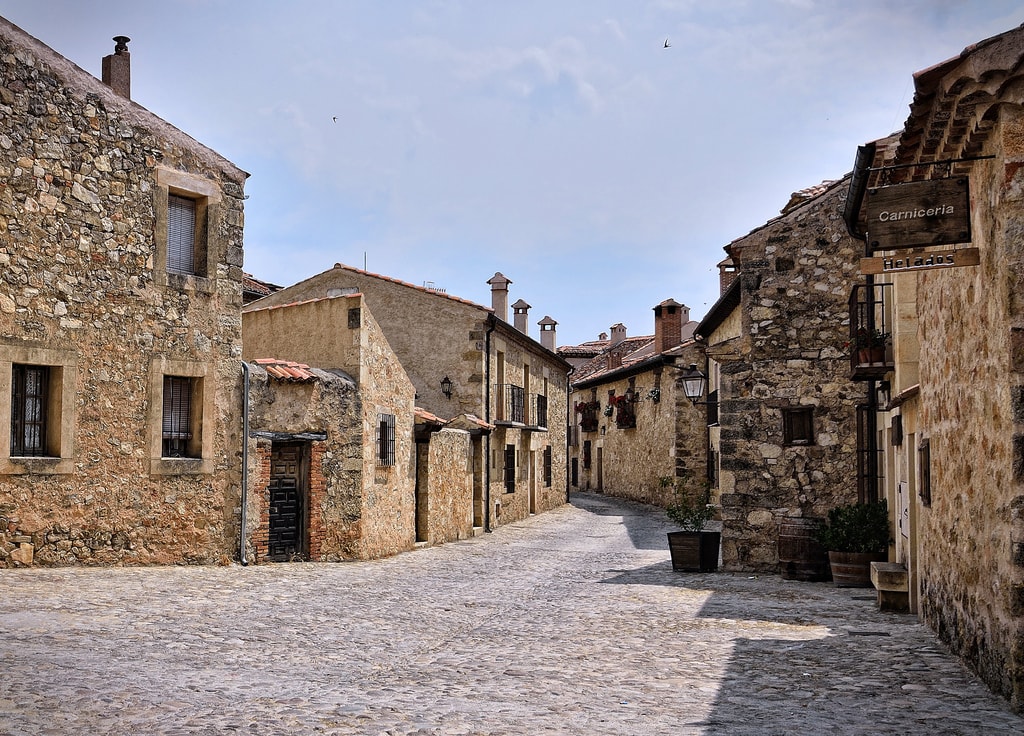 Archidona is one of those towns that dot the Málaga countryside like giant snowflakes but which are so easy to drive past. But it is well worth stopping off here, not least because you’re likely to be the only traveller exploring its lovely old neighbourhood if you do. Particularly attractive is the eight-sided Plaza Ochavada, which is sanded over and converted into a bullring during the summer fiesta; surrounded by typical Andalusian townhouses and sunny terraces, it’s also a perfect place for a long, lazy lunch.

The villages of the Alpujarra region in the Sierra Nevada National Park – immortalised by Gerald Brenan in South From Granada – have remained unchanged for centuries. Bubión is the least touristic of them all: a rural farming settlement in which visitors are few and far between, it sits on the southern edge of the Sierra Nevada in the foothills of mainland Spain’s two highest mountains. Such is the altitude here that clouds drift amongst the scruffy rooftops, on top of which chimneys breathe smoke into the cold, pine-scented air. 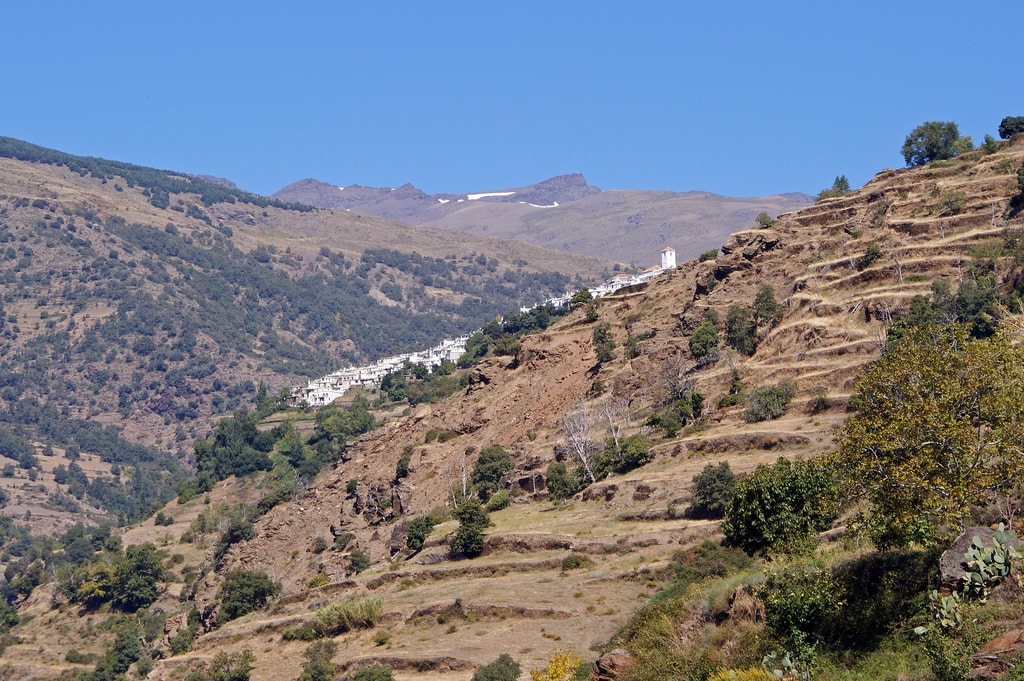 Bubión, with the peaks of the Sierra Nevada in the background | © Randi Hasuken / Flickr

Not for nothing is Écija – an enchanting town just an hour’s drive from Seville – known as La Sartén de Andalucia (The Frying Pan of Andalusia): summer temperatures once reached 52°C (125.6°F) here. In spring or autumn, though, Écija is a great day trip from the Andalusian capital, boasting a charming old town, ornate church towers decorated with glazed ceramics and some gorgeous 18th-century mansions. The must-see buildings are the Palacio de Peñaflor and the Parroquia Mayor de Santa Cruz, once the town’s main mosque.

It’s hard to imagine that Cudillero lies in the same country as the sun-baked pueblos blancos of Andalusia. This tiny fishing village clusters around a small cove in Asturias, the cider-producing region on Spain’s northern Atlantic coast. It is known for the banked multi-coloured houses set into the verdant hillside surrounding the harbour. To better acquaint yourself with Cudillero’s many charms, take the self-guided tour by following the blue fish that are painted onto the narrow winding streets; after, you can enjoy fresh seafood in one of the bars overlooking the Atlantic. 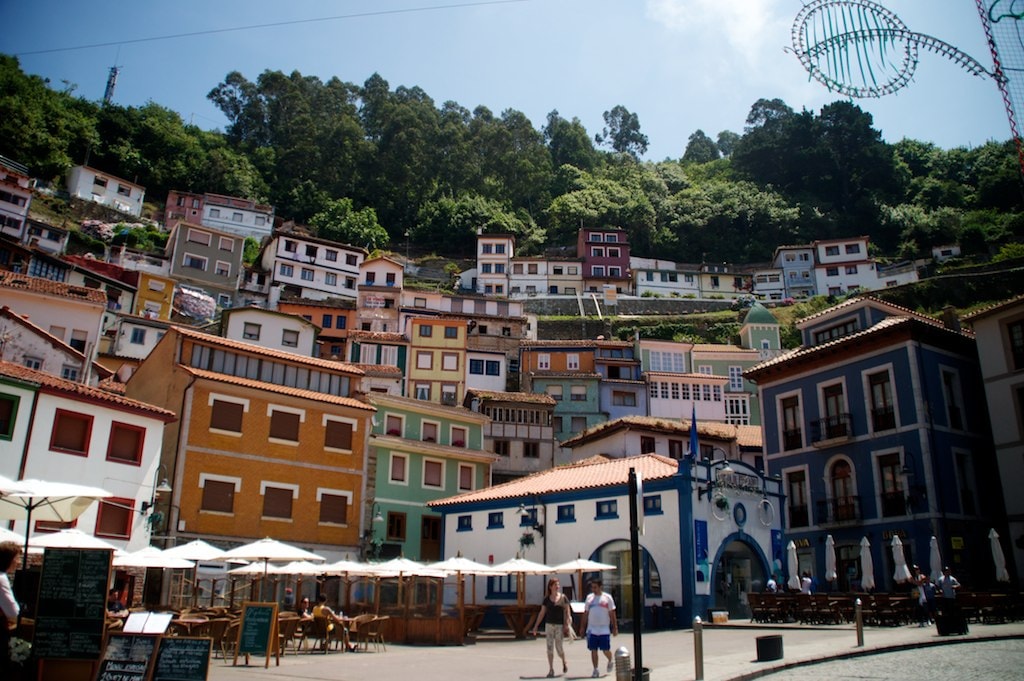 This former fishing village lies on Granada’s Costa Tropical, and while it’s less than 20 miles (32 km) from the hugely popular resort of Nerja, it is never overrun with tourists. Some wonderful bathing can be enjoyed off its two beaches, both of which back onto a row of funky chiringuitos. Its beguiling old town is split up into sections called manzanas – apples – and extends up the hill to the San Miguel castle. The English poet and Hispanophile Laurie Lee loved Almuñécar and was living here when the Spanish Civil War broke out in summer 1936.

Peñíscola is a walled medieval town situated on Valencia’s Orange Blossom coast, 90 miles (56 km) north of Valencia itself. Only in the past couple of years or so has this almost laughably pretty place started to attract foreign visitors (in part owed to Game of Thrones being filmed here in 2015), so now is a perfect time to go before it becomes really popular. The old town occupies a steep outcrop of land that is protected by formidable stone walls; climb to the top, and you’ll reach the 14th-century castle that is Peñíscola’s key historical attraction. 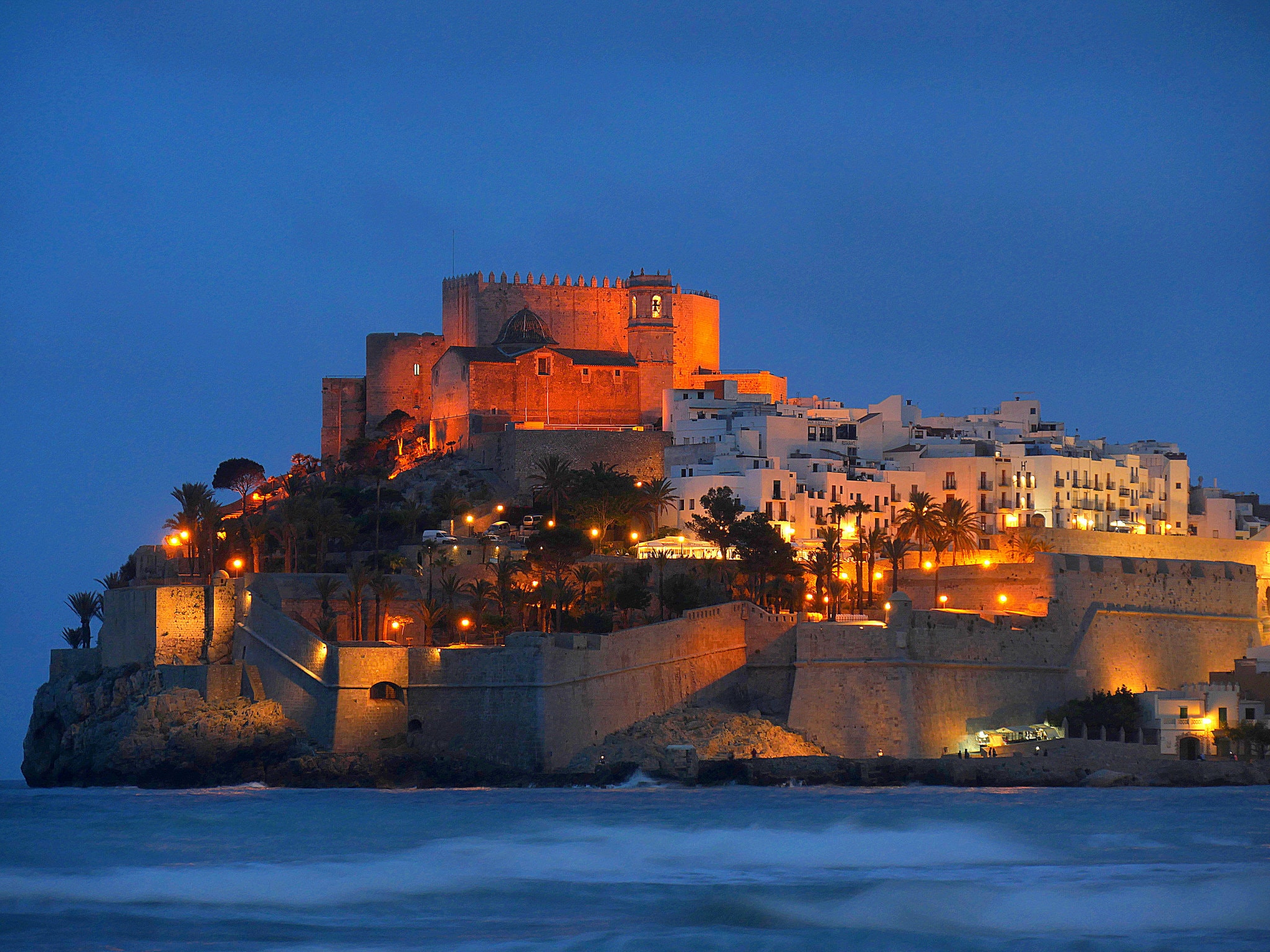 The old town and castle of Peñíscola | © Zoi Koraki / Flickr

The frequently overlooked town of Cazorla spreads itself out at the foot of the Peña de los Halcones and the castle of Yedra, on one side of a steep and rocky valley. This romantic little town’s obscurity is surprising when you consider that it lies within the boundaries of the Sierras de Cazorla, Segura and Las Villas National Park – the largest protected natural area in Spain. There is some excellent trekking to be enjoyed in the park, which abounds with streams, waterfalls and crystal-clear springs.

No wonder this town has been listed as a National Monument since 1961. As viewed on the approach from Teruel in Aragón, the light pink buildings of Albarracín make for a breathtaking sight: they seem to rise organically from a sun-scorched mountain that towers above the Guadalaviar river. Wandering the town’s cobbled streets, you feel utterly disconnected from the modern world; indeed, looking out from the Torre del Andador, all you can see for miles in every direction are bare, stony mountains. 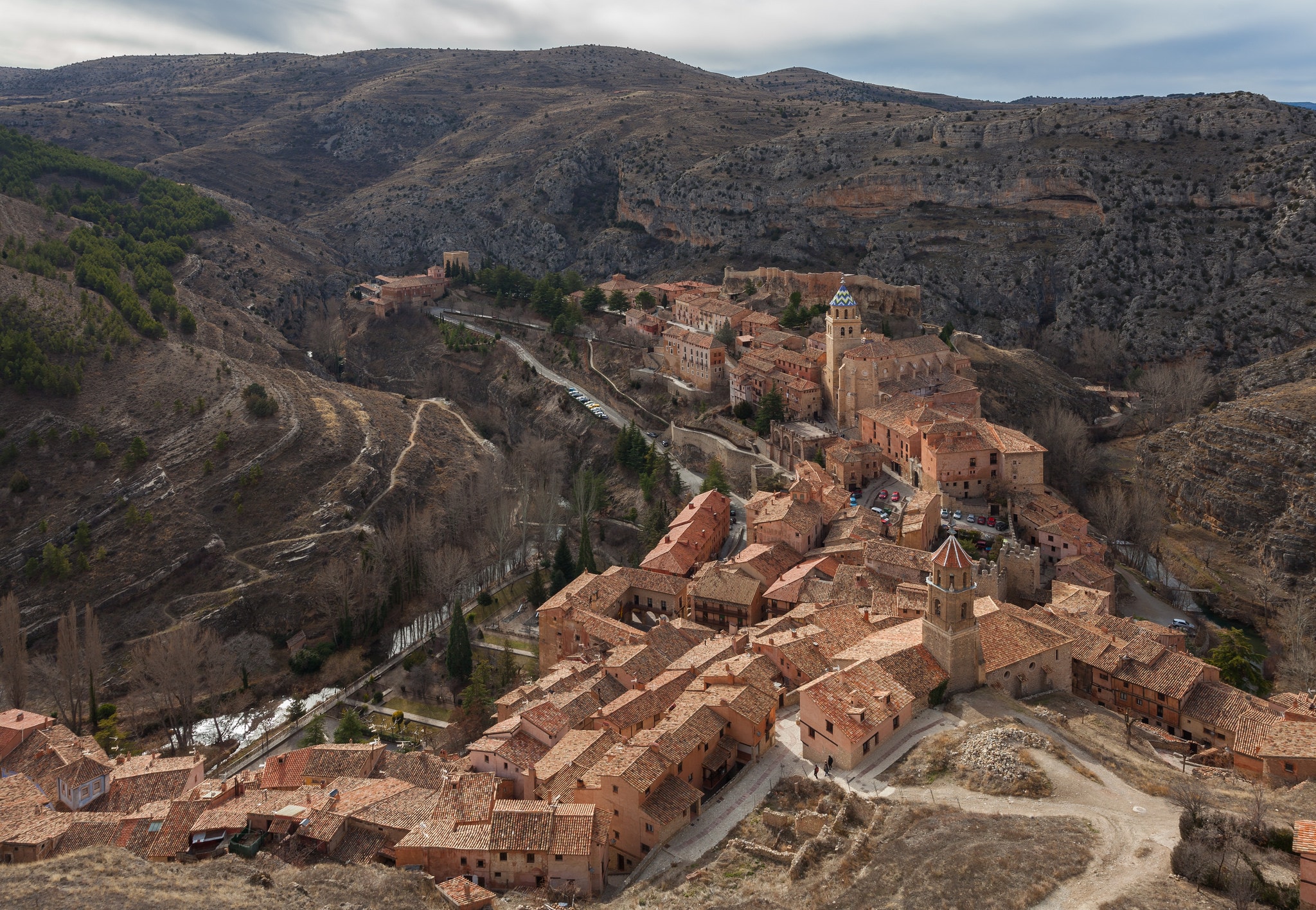