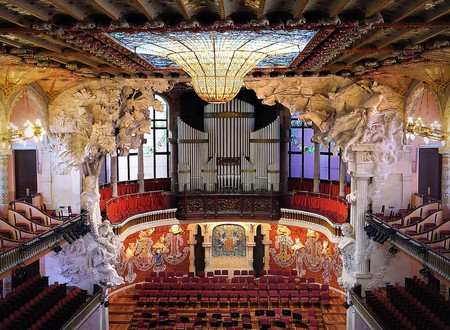 Located in the El Born neighbourhood of Barcelona, the Palau de la Música Catalana is a historic concert hall famous for its eye-catching design. One of the city’s many modernist landmarks, this turn-of-the-century masterpiece is possibly one of the most overlooked gems in the city.

The concert hall was built at the height of the modernist era in Barcelona and epitomises the architectural and artistic features most associated with the movement, such as a fluidness of form, with a preference for curves over straight lines, colourful stained-glass windows and mosaics and the ornate decoration, rich in natural and symbolic themes.

… but it wasn’t built by Antoni Gaudí

Most people associate modernism in Barcelona with the famous architect Antoni Gaudí, the mastermind behind some of the city’s most famous landmarks, such as the Sagrada Família, the Casa Batlló, the Park Güell and La Pedrera. Yet the Palau de la Música was designed by another pioneer of the modernist style, Lluís Domènech i Montaner, who is also responsible for the impressive Hospital de Sant Pau, a modernist hospital building that was operational until 2009. 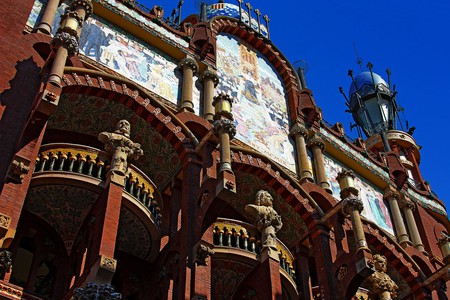 It has been open to the public for over 100 years

The concert hall was built between 1905 and 1908 at the request of the Orféo society, a local choral society. In its first few years, it welcomed a number of premières by leading artists at the time, such as the Catalan poet and composer Enric Granados. The Palau de la Música is still open to the public today and hosts regular performances by leading musicians from around the world.

When the Palau de la Música was being designed, Catalan society was going through a period of revived cultural pride known as the Renaixença or ‘rebirth’. Barcelona’s wealthy took particular interest in the construction of the concert hall and made generous donations to support it, in return asking that the design represent Catalan culture and identity through its choice of materials, techniques and symbolism. 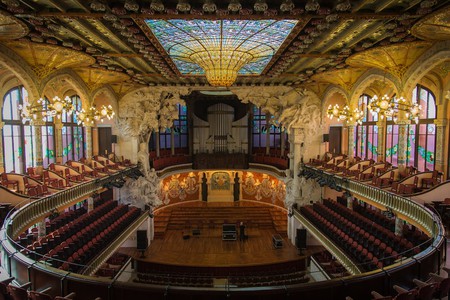 Thanks to its impressive stained-glass ceiling and clever design, the Palau de la Música can rely entirely on natural light to illuminate the concert hall during daytime hours. The colours of the stained-glass inverted dome ceiling are themselves suggestive of the sky and sun, with shades of blue and gold dominating. Outside of the hours of daylight, the concert hall is illuminated artificially with splendid chandeliers and other ornate light fittings.

So spectacular is the Palau de la Música that the building has been opened to the public for daily guided tours to satisfy the public urge to see the inside. Lasting just under an hour and costing €20 per person, these tours give a detailed commentary on the design and history of the building. The tour is the only way to get a sneak peak inside the awe-inspiring concert hall without paying to see one of the shows. 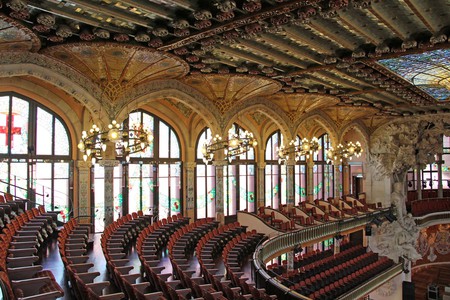 Its location is somewhat unusual

You might expect to find a building of this magnificence standing proudly on one of the main streets of Barcelona, or in one of its more affluent neighbourhoods. Yet the Palau de la Música is tucked away in a corner of the old town, down a street running perpendicular to the Via Laietana. As such, you can’t really see the Palau de la Música from afar, and the only way to admire its facade is from quite close by and at street level. In contrast, many of Gaudí’s most notable designs are found on wide avenues such as the Passeig de Gràcia.

So remarkable is the Palau de la Música’s design as an example of the Catalan modernist movement that in 1997 UNESCO declared it – along with the Hospital de Sant Pau – a World Heritage Site. It captures something of the creative and imaginative spirit of the time and remains an important symbol of national identity for many Catalans. 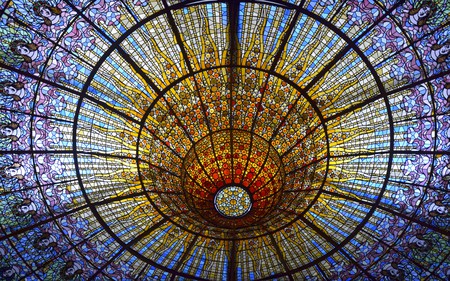 The facade is a homage to classical music

Although it can be tricky to get a good view of the facade, it’s worth taking the time to observe, as it’s rich in symbolic ornamentation and features some rather famous faces. There are busts of the great composers Giovanni Pierluigi da Palestrina, Johann Sebastian Bach, Ludwig van Beethoven and Richard Wagner. There is also a large sculptural ensemble representing Catalan music, which includes a depiction of St George, known locally as Sant Jordi, the patron saint of Catalonia.

Some of the world’s most esteemed musicians have played here

Although the Palau de la Música has always been conscientious in promoting the work of Spanish and Catalan artists, it has also welcomed world-famous musicians from other parts of the globe. Soloists such as Julian Lloyd Webber, Claudio Arrau, Jacques Thibaud, Vladimir Ashkenazy and Jessye Norman have all played here, but so too have the likes of Ella Fitzgerald, Paco de Lucía, Norah Jones and Charles Aznavour. 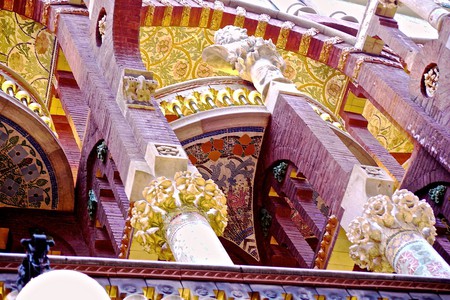