10 of the Coolest Exhibitions in Madrid this Winter 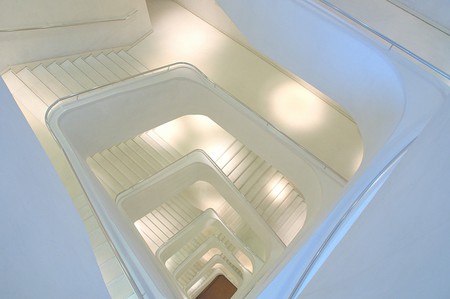 Madrid is home to some of the world’s most famous art galleries, from the European classics in the Prado to Picasso’s masterpieces in the Reina Sofía. But as well as its permanent offerings, the city is hosting a series of exciting temporary exhibitions this winter. We take a look at some of the best.

One of Madrid’s most famous art galleries, and part of the city’s Golden Triangle of art, the Thyssen-Bornemisza is celebrating its 25th anniversary in 2017 with a whole range of exhibitions and events. One of the most highly anticipated is Picasso Lautrec, an exhibition focusing on the time Pablo Picasso spent in Paris between 1900 and 1904 and the way in which the young Spanish painter was influenced by French artist Henri de Toulouse-Lautrec. Both artists depicted Paris’ underworld of prostitutes, back-street bars and unusual characters in their work, which will be displayed together here.

The eyes have it At The Salon at the Rue Des Moulins, Henri de Toulouse-Lautrec paints the women of a high-class brothel in Paris in a stylistic manner. #salonattheruedesmoulins #museetoulouselautrec #lautrec #graphicartist #paris #brothel #1894 #artoninstagram #artlove

The winning images of the prestigious World Press Photo awards will be on display in Madrid from late September to early November. The collection of work by 143 photographers encompasses the most dramatic, moving and humorous photographs of 2016, images from around the world that will go down in history.

NSK from Kapital to Capital

Madrid’s main modern-art museum, the Reina Sofía, plays host to the first-ever retrospective in Spain of the NSK (Neue Slowenische Kunst, ‘New Slovenian Art’), an artistic movement that flourished in 1980s Yugoslavia during the final decade of the Cold War. The NSK collective included various groups that specialised in different disciplines, and the Reina Sofía brings together a huge range of the group’s work, from protests and theatre productions to interviews, exhibitions and performances.

Wildlife Photographer of the Year

The world’s most important wildlife photography competition showcases its entrants in Madrid this winter, giving visitors the chance to view some incredible shots of flora and fauna from all over the planet. Wildlife Photographer of the Year promotes the work of nature photographers working around the world, with both adult and young amateur photographers included.

Another powerful image from the new collection, #WPY53. Our jury was moved by this strong composition captured by Finalist @justinhofman, symbolic of how plastic is confusing and endangering marine life. Seahorses hitch rides on the currents by grabbing floating objects such as seaweed with their delicate prehensile tails. Justin watched with delight as this tiny estuary seahorse ‘almost hopped’ from one bit of bouncing natural debris to the next, bobbing around near the surface on a reef near Sumbawa Island, Indonesia. But as the tide started to come in, the mood changed. The water contained more and more decidedly unnatural objects – mainly bits of plastic – and a film of sewage sludge covered the surface, all sluicing towards the shore. The seahorse let go of a piece of seagrass and seized a long, wispy piece of clear plastic. As a brisk wind at the surface picked up, making conditions bumpier, the seahorse took advantage of something that offered a more stable raft: a waterlogged plastic cottonbud. Not having a macro lens for the shot ended up being fortuitous, both because of the strengthening current and because it meant that Justin decided to frame the whole scene, sewage bits and all. Indonesia has the world’s highest levels of marine biodiversity but is second only to China as a contributor to marine plastic debris – debris forecast to outweigh fish in the ocean by 2050. On the other hand, Indonesia has pledged to reduce by 70 per cent the amount of waste it discharges into the ocean. Image: Sewage surfer by Justin Hofman, USA. Finalist 2017, The Wildlife Photojournalist Award: Single Image. Scientific research at the @natural_history_museum informs debates on issues including climate change, ocean acidification and plastics in the sea. Find out more by visiting nhm.ac.uk/oceans. Justin's image will be on display at the Museum from Friday 20 October. #WPY #WildlifePhotographerOfTheYear #MarineLife #Photography #MarineConservation #Oceans #Wildlife #OceanPollution #Seahorse #NaturePhotography #Nature #WildlifePhotography #Underwater #UnderwaterPhotography #NaturePhotos #Photojournalism #PhotoOfTheDay #SaveOurSeas #Sea #Ocean #Conservation

Magnum: Hojas de Contacto (‘Magnum: Contact Sheets’) brings together the contact sheets of photographers working for the Magnum agency from the 1930s to the present day, to show how some of the world’s best shooters edit their work. The exhibition gives a fascinating insight into the creative process of top-level photography, and how photographers go about choosing their best and most striking shots for publication.

Madrid’s Fundación Telefónica is hosting an exhibition this winter that allows the public to get a taste of other worlds through virtual reality. The Virtual Reality Space, on the fourth floor of the gallery, housed in the Telefónica skyscraper on Madrid’s Gran Vía, will feature all the latest innovations in virtual reality, and they will be available for the public to try for free. There will also be an exhibition charting the history of the medium. The visit ends with the chance to take a 360° selfie – say cheese!

This winter, Madrid hosts an homage to Czech painter and Art Nouveau pioneer, Alphonse Mucha, who was famed for his paintings, advertisements and designs. The exhibition includes over 200 works, with paintings including Self-Portrait (1899) and advertisements from the late 19th century. Mucha was known for his paintings of women in a dreamy, seductive style, as well as for his distinctive lettering and typography.

This exhibition showcases the work of American photographer Nicholas Nixon, whose speciality is in portraiture and documentary photography. Nixon is famous for his use of large-format cameras instead of the 35mm film cameras favoured by most modern photographers. The collection of over 200 photographs includes Nixon’s famous work, The Brown Sisters, a series of photographs of his wife and her three sisters taken every year for a period of over 40 years.

Discover the work of Seville-based artist Salustiano in this intimate exhibition at the Lucia Mendoza modern-art gallery, which champions contemporary Spanish artists. It’s a great opportunity to discover up-and-coming Spanish painters, and Salustiano is definitely one of the names to watch.

This exhibition focuses on the way that US artist Andy Warhol used the emerging technological and industrial advances of the 20th century in his work, from screen printing to video. The exhibition, which features over 350 pieces, allows visitors to chart the career of Warhol through his work, from his famous Campbell’s soup tins to his portraits of Jacqueline Kennedy, Marilyn Monroe and Elizabeth Taylor.