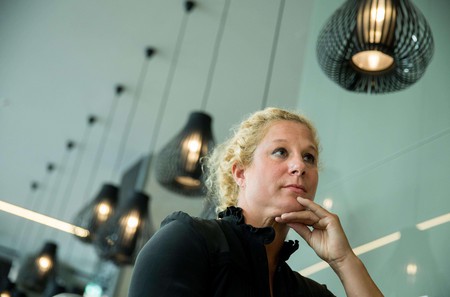 Ana Roš, the chef at Hiša Franko, was just named the world’s best female chef by The World’s 50 Best Restaurants organization. Her restaurant is in a remote part of Slovenia, just a few miles from both Italy and Austria in the alpine Soča Valley. A mention of the chef’s name, the restaurant’s name, and even the country might make you ask, “Who? Where?” But in fact, Roš is one of Europe’s finest chefs, and she’s breaking culinary boundaries in her home country.

Go to Slovenia’s picturesque Soča Valley, in the northwest corner of the country, and you’ll find a pink farmhouse—both restaurant and inn—called Hiša Franko. Its head chef is a woman named Ana Roš; her partner (in both business and romance) Valter Kramar is the sommelier. You’ll eat one of the most creative and interesting meals—in six or eleven courses—you’ll ever have in your life, all ingredients sourced from within walking distance of the restaurant. After tasting her dishes it will come as no surprise that Roš was just named the world’s best female chef.

It might surprise you to learn, though, that Roš is entirely self-taught. Unlike most of the top chefs in the world, she never attended cooking school; Roš never staged in other top restaurants under big-name chefs, or even worked in a professional kitchen of any kind before taking over at Hiša Franko. She kind of fell into cooking; her determination powered her rise to the top of the game.

While Roš was growing up, she was a good student, skilled with languages, and it was presumed by her ambitious family that she would become a diplomat. During a visit home from university (where she was studying international relations) she visited a restaurant, Hiša Franko, with her mother, and met and fell in love with a server whose parents owned the restaurant. Roš and the server, Valter Kramar, were soon a couple, and they traveled the world together. Soon, though, Kramar’s parents decided to retire, and as their eldest son, Kramar inherited the restaurant.

Roš had been poised to accept a diplomatic position in Brussels, but out of loyalty to Kramar, she decided to stay in Kobarid, just down the road from the village where she’d grown up, to help run Hiša Franko. It was a tough decision that shocked her family, since in Slovenia, cooking is viewed as blue-collar work.

The kitchen staff all left not much later. It might have made sense for Kramar to run the kitchen, since he was the one with professional restaurant experience. But he’d spent years training as a sommelier, so he was needed in the front of the house. That left Roš, who lacked the basic skills one might learn in culinary school; she couldn’t get her bread to rise or her ravioli to remain sealed. She and Kramar visited high-end restaurants including elBulli and El Celler de Can Roca for inspiration, and she returned to Hiša Franko with ambitious ideas far exceeding her abilities.

Thus began several years of learning and experimentation. “I was testing my new dishes on my guests,” Roš says on Chef’s Table. “Unfortunately for them, I made many mistakes.” During these early days, a friend (who also happened to be a food critic) visited and urged her to make use of local ingredients: river trout, local cheeses, and other products from the land immediately nearby.

Taking that advice to heart, Roš embarked on a new chapter with the restaurant. She began to cook in a way that highlights the region’s Alpine-Mediterranean culinary traditions, influenced by its neighboring countries of Italy and Austria. “I realized when I express the territory, that my thoughts…they can travel,” she says on Chef’s Table. “I was creating a philosophy and starting a new Slovenian story.” While Roš was growing up, before Slovenia gained independence in 1991, it had been communist; equality was the priority and creativity was discouraged. Certainly it hadn’t been known for its gastronomy. What it did have, though, were raw ingredients, to be fished and foraged, gathered and milked.

Roš now practices what she calls her “zero-kilometer” approach. She employs ingredients only from within walking distance of Hiša Franko, buying whatever her mushroom forager, cheesemonger, farmer, or fisherman brings her each morning, and using vegetables and herbs from her own organic garden. “In the last 10 years, we’ve formed an economical circle with local farmers and producers,” Roš tells Food & Wine. “Since we are so remote we sometimes had big trouble with suppliers. So in time we started being more locally dependent. So this is how we help the environment a little bit, and also give farmers a good reason to continue producing things because it’s economically interesting. For us, we have a local, seasonal product that’s never traveled—it’s kilometer zero. And very often it is also very traditional, something not found anywhere else.”

She continues: “The place where I live is mountainous but very close to the sea. This is why the food is so interesting; it’s actually Alpine based on local, sometimes forgotten products. Since the area is very difficult to reach, a lot of traditions remained intact. And the beauty is this mix of the two different climates: Alpine mountains overlooking the Mediterranean. It influences the minerality of the soil and the grass, which cows graze from May to September, giving us fantastic cheeses and meat. This is what I think about for the restaurant, using these natural elements and seasoning the meat or land dishes with fish. Squid with lamb sweetbreads in a fondue of local cheese aged in our cave. Deer heart dressed with oysters…”

Hiša Franko began to garner praise for Roš’s cooking. But Roš found herself in a conundrum: Slovenia is a country with no gastronomic reputation. There’s no Michelin guide for Slovenia. And the restaurant is a very remote part of the country. Hiša Franko received very little international attention until Massimo Bottura recommended Roš to the producers of Chef’s Table.

Between that and participating in the annual international chef-shuffle that is Gelinaz, Roš is beginning to get the international profile she deserves, entering the top 100 of the World’s Best list in 2017 and named the world’s best female chef the same year. “Voters (were) seduced by the stunning location, the charm of the restaurant and its service, but most of all by the originality, subtlety, and sophistication of the food,” William Drew, group editor of The World’s 50 Best Restaurants, told CNN. “She has almost single-handedly drawn attention to her region, its agro-economy, wine, culture, and sheer beauty.”