The Ultimate 24-Hour Guide to Bratislava 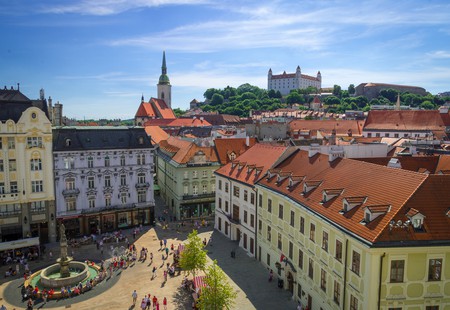 Slovakia’s capital city is bursting with energy and things to do from sunrise to sunset during every season of the year. Fortunately, most of the main attractions are concentrated in the historic Old Town, making it easy to squeeze in a lot of sights in just one day. If you only have 24 hours to spend in Bratislava, here’s our time-efficient itinerary of things to see and do.

Bratislava’s coffeehouses were used by aristocrats at the turn of the 20th century as a place to see and be seen, to meet friends and business partners, and to linger for hours over a cup of coffee and cake. From the 1930s to 1990s, many coffeehouses and cafés in Bratislava lay dormant. Today, it’s once again possible to partake in coffeehouse culture as it was done in the past. You have your pick of many different places, and lingering for hours at a street-side table is totally acceptable. The coffeehouse scene is making such a rapid comeback that the New York Times did a report on all of the best places to get a cup of joe in the Old Town.

In the city’s central square, you have your pick of two of the oldest cafés in town, Kaffee Mayer and Schokocafe Maximilian Delikates. Just around the corner from the Primatial Palace, you can enjoy a variety of different lattes and cappuccinos with one of the best brunches in town at Café Mondieu. If something trendy and hipster is what you’re after, Urban House has two Old Town locations offering tasty seasonal favorites, such as pumpkin lattes. For a coffeehouse that features freshly ground specialty beans, visit Fach.

After energizing with coffee, hike up for about 15 minutes from the Old Town to reach the Bratislava Castle. Inside, there’s a Museum of History that will provide you with information about the development of the Slovak Republic over several centuries. Outside, you can stroll through the Baroque gardens at the rear of the palace and enjoy spectacular views of the city.

When you’re ready to walk down, stop for lunch at Zamocky Pivovar, or Castle Brewery. They brew their own beer, and usually have at least four different types on tap. They also serve classic Slovak pub food – like goulash, sausages, and fried cheese with fries. Make sure to eat up, as you’ll need your energy to explore the Old Town. 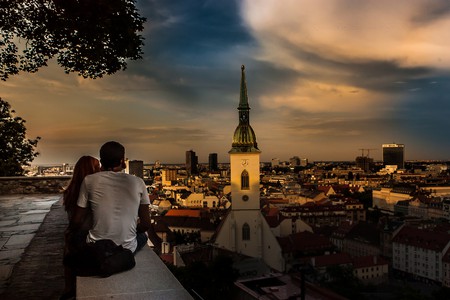 The view over the city from the lower part of the Castle walls. | ©KamilRejczyk/Flickr

History in the City Center

With a short amount of time in Bratislava, you’ll need to concentrate your energy on two main buildings in the city center; the Old Town Hall and the Primatial Palace. The Old Town Hall houses the interesting Museum of Bratislava, with lots of great items which show the city’s development, from old shop signs to old postcards. The Town Hall also has a gruesome dungeon with examples of torture instruments and a tower that provides the best view over the Old Town.

Next door, the Primatial Palace only takes a short time to visit but always wows visitors with its gorgeous Hall of Mirrors, tapestries from the 17th century, and period furniture from the 19th century. You’ll want to leave some time to admire it from the outside as well and to take a walk around Bratislava’s historic Old Town. You can’t get lost here – as soon as you see a street with cars or trolleys, turn back and stay in the pedestrian area. In an hour or less, you’ll easily cover all of the main streets in the pedestrian area and pass by many pretty pastel buildings and proud palaces that date back to the 18th century. 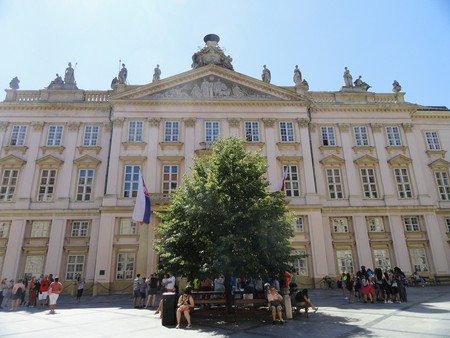 The pretty pink exterior of the Primatial Palace | © Damien/Flickr

The best way to start an evening in Bratislava is at the Old Building of the Slovak National Theatre for an opera, theatre, or dance performance. With many performances starting at 5pm, it’s the perfect pre-dinner cultural experience. After the show, walk over to Modra Hviezda for a tasty Slovak dinner. You won’t soon forget your dinner here, featuring dishes such as wild boar and Mangalica pork, as well as local wines, in a classy atmosphere.

After dinner is a good time to walk across the SNP Bridge to the UFO Tower and Restaurant. You can take the elevator up and sip a uniquely crafted cocktail while watching the lights of the city twinkle 95 meters below you. The Bratislava Castle and St. Martin’s Cathedral are always illuminated at night and look magical from the windows of the UFO in the evenings.

Bratislava's UFO is a great place to be in the evenings. | ©IvailoDjilianov/Flickr

If you aren’t tired from all of the walking, eating, and drinking you’ve done earlier in the day, Bratislava has a thriving nightlife scene. You can head to typical Slovak pubs and drink beers with a mixed crowd of visitors and locals, or you can visit a trendy nightclub. Nu Spirit Club and The Club Bratislava are both very popular amongst the young and wild crowd. For a unique experience, head to Subclub, a house and techno venue located in an old nuclear bunker.