An Alternative Guide to Bratislava 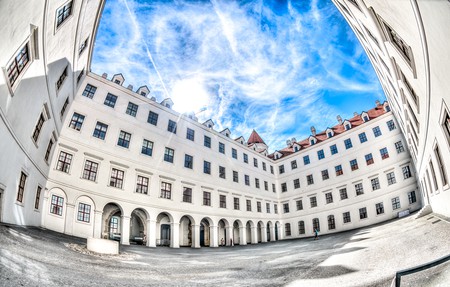 As Slovakia‘s capital, Bratislava is home to interesting museums, modern art galleries, and many fabulous cafés and bars – however, it’s often very crowded, especially during the summer months. For a different take on this fascinating city, side step the typical tourist route with our alternative guide.

Visit a sky-high tower, but not the UFO

Bratislava’s UFO Tower is an incredibly popular tourist spot due to the spectacular photo ops from the Observation Deck and the world-class fusion cuisine served in the restaurant. But did you know that you can also dine in a restaurant in the TV Tower on Kazmik Hill? The Kazmik Tower offers both a beautiful Observation Deck and a Mediterranean themed restaurant. Best of all, you won’t be caught up in a horde of other tourists. The best way to reach the tower is by walking along the winding trails in Bratislava’s forest park for about 45 minutes. Enjoy the view! 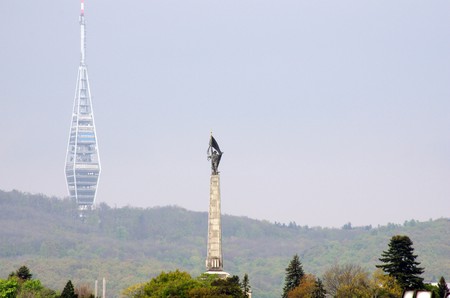 The Kazmik TV Tower sits high on a hill overlooking the city. | ©MikeSteele/Flickr

Lounge at the beach

If you visit during the hot summer months, you might be interested in lounging in the sand and cooling down. Join the locals at Magio Beach, on the bank of the Danube River near the UFO Tower. Magio Beach is a public ‘beach’ area, with imported sand and a fun atmosphere on sunny days. There are hammocks, chairs, and umbrellas set up and there’s often live music on the weekends. You can’t swim in the Danube, but you can swim at the pool located near the bar. You can also play a game of beach volleyball in the sand, participate in a group yoga class, or bring your kids to play on the large playground.

If you’ve ever wanted to stay in a hotel which is also a modern art gallery, here’s your chance. Hotel Galeria Spirit aims to give visitors “the opportunity to experience firsthand in their room, the relaxing effect of modern abstract paintings that were selected on the basis of a positive action on the human subconscious”. Also known as the ‘Butterfly House’ for its colorful and eclectic exterior, the hotel is conveniently located near the main train station.

It‘s worth the short walk from the Old Town to take a look at the controversial Slovak National Radio Building. This inverted pyramid has been voted by The Telegraph as one of the ugliest buildings in the world – but is still defended by Slovak architects as being something special. Regardless of whether it is ugly or special, it is certainly an interesting building to see. There is even a concert hall housed within, so if you’re lucky enough to be in town when there is a performance on, book a ticket for a double hit of culture. 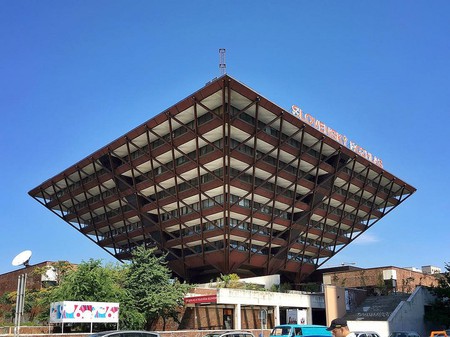 Stroll through the Botanical Garden of Comenius University

The Botanical Garden is located just outside of the Old Town on the banks of the Danube River and offers a pleasant respite from the crowds. The garden is the perfect place to relax and step away from the busy city and has more than 5,000 species of plants to admire. The rosarium boasts more than 120 species of roses, while the Japanese-style garden is also a highlight. With an entry fee of just €3, it is well worth it to spend an hour or two lingering in Bratislava’s only botanical garden.

Bratislava’s flourishing café scene offers a coffee place for every taste imagineable, but why not try one of the most unique? Dom u Kubistu is decorated in the Cubist style, and has a simple menu offering several options for vegetarians and vegans. The café is focused on using fresh and locally sourced ingredients for their menu, which features daily specials as well. Dom u Kubistu is just around the corner from Bratislava‘s famous Blue Church, so don’t miss it if you are in the area.

Travel by boat to Devin or Danubiana

During the summer, river cruise boats whisk passengers from a dock near the Old Town to the medieval Devin Castle or the trendy and modern Danubiana Meulensteen Museum of Modern Art. Pack a picnic lunch to enjoy at Devin, overlooking a bend in the Danube River from atop the remains of a great fortress which once served as an important trading center and military stronghold. Fuel up post-lunch with a coffee in Danubiana’s café to take in the thousands of modern art objects on display in the large building and outdoor sculpture garden, before enjoying a leisurely cruise back to the city in the afternoon.