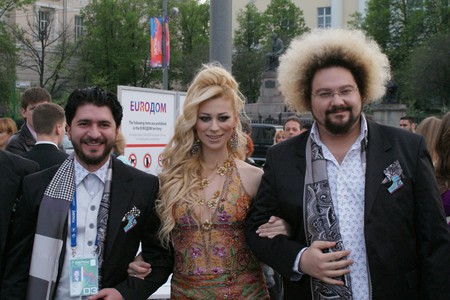 Serbia didn't make it to the finals of Eurovision in 2009, but Marko Kon's song is still a classic | © Wikimedia Commons

It hasn’t been easy being a Serbian fan of the Eurovision Song Contest. Televisions in Belgrade, Novi Sad and the rest have tuned in to the show 39 times, but on only 14 of those occasions have the viewers had a Serbian participant to cheer on. Conflict and politics will do that. Serbia has produced some Eurovision gems though, and these are the best of the best, in chronological order. Milan Stanković’s miserable 2010 effort will not be included.

Where better to start than at the beginning? Yugoslavia first participated in the contest in 1961, and the singer chosen to represent the state was none other than Ljiljana Petrović. She did so with an emotional balled called Neke Davne Zvezde, or ‘Some Distant Stars’, and it is difficult not to feel her pain by the end of it. Ljiljana sings of lost love and heartache, like all great Serbian songs, but it was only good enough for an 8th place finish.

Korni Grupa were no ordinary rock band. They were considered to be the first Yugoslav supergroup and as such they were chosen to represent Yugoslavia in 1974. They did so with the easily translated Moja Generacija, a progressive pop song that seems too ambitious for its own good. It works, but only just. Korni Grupa also had the honour of sharing wardrobe with eventual winners of the ’74 event, ABBA. You may have heard of them.

The 1990s were a particularly grim decade for everyone in the Balkans, and Yugoslavia’s Eurovision story thus came to an end with the intensification of war in 1992. Serbia’s Extra Nena was the final entry, and what a performance the sparkly woman from Belgrade gave. Even Terry Wogan had nice things to say about the song, although the situation on the ground may have had something to do with that. Ljubim te pesmama was a fun pop song, but it ended at a disappointing 13th.

It is impossible to write an article about Serbia and Eurovision without mentioning Željko. The man is a Eurovision icon in Serbia, and has been involved with the competition more than anyone you could care to mention. He performed in 2004 and 2012, and has had a hand in composing songs for entries in 2006, 2008 and 2015. His first entry remains his best, and Lane Moje (My Sweetheart) finished 2nd in the 2004 contest. Is it an emotional ballad? You bet your life it is.

Serbia’s golden Eurovision evening came in 2007, when Marija Šerifović wiped the floor with all competition in front of her. Molitva (Prayer) was a ballad (of course), but it was an emotional song with plenty of bite and no small amount of class. This was the last non-English winning entry for a decade, but with strings like that it is easy to see how language can be transcended. A genuinely iconic Eurovision song. It has all been somewhat downhill since then.

As hosts in 2008, Serbia was tipped by many to become back-to-back Eurovision winners. Jelena Tomašević’s Oro was another string-heavy balled (written by Željko, of course), and it proved immensely popular throughout the region. It was typical Željko, earnest lyrics backed up by lush instrumentation and a big emotional bit towards the end. Despite strong home support, it only managed a 6th place finish.

It all gets a little strange from here. Your opinion of Serbia’s 2009 entry, which didn’t actually make it past the semi-finals, will all depend on how you view Eurovision. If you watch the show for great live performances and good songwriting, you will despise this. If ridiculousness and no small amount of sarcasm are your thing, then boy are you in luck. Marko Kon & Milaan confused audiences with Cipela, a song about a woman refusing to love a man until he gets rich. Just listen to it.

If there was a Hall of Fame for vastly underrated Eurovision entries, Nina’s 2011 effort would be in there. Čaroban is a sunshine pop song that could have come from the ‘60s but didn’t, a ray of light in dark Eurovision times. It finished down in 14th place, but it deserved much better. The aesthetics matched the sound too, which is always a nice touch. In another world, this was a winning song.

Serbia has sadly fallen in line with many other nations in recent years, in that it sends a faceless song to the competition out of necessity more than anything else. The last decent entry came in 2015, with Bojana Stamenov’s Beauty Never Lies. The song doesn’t mess around, staking its claim as an inspiring anthem for individuality from the get-go. Coupled with an electric live performance, this is another song that deserved better than its 10th place finish.