An aerial shot of the Serbian capital | © WikiCommons

If a city has a district that was built from scratch following World War II, was constructed primarily using concrete, and uses the word ‘Block’ to designate its areas, the chances are it isn’t going to get much love in the modern age. Asphalt is well and truly out of style in the 21st century, and the masses of hulking grey housing estates are more likely to evoke thoughts of Orwell and oppression as opposed to Andrić and ambition. With that in mind, we’re here to tell you that you need to go to New Belgrade, and you need to go now.

It wasn’t always a mass of residential blocks, restaurants, cafes and boulevards, however. In the beginning, there was Bežanija. The oldest part of New Belgrade by far, people have lived here for millennia, but the village (Bežanija means ‘refugee camp’) didn’t officially become a part of the Serbian capital until King Alexander I’s coup in 1929. There wasn’t a whole lot between Bežanija and the old centre other than a few ramshackle buildings and a massive swamp.

World War II came and World War II ended, with Josip Broz Tito firmly in control of a socialist Yugoslavia with Belgrade as its capital. Immediately following the war, a huge construction project would be put in place to transform the swamp into a new city, making Belgrade the massive European capital that Tito so dearly wanted. Building began in 1948, and four years later, New Belgrade (Novi Beograd) was officially designated as a municipality.

It was a true source of pride for socialist Yugoslavia, as workers, students and normal people came from all over the state to help build the brand new part of the capital. ‘Hard work’ is an understatement to say the least, but little by little the terrain was covered with sand and transformed into a modern (for the times) capital. The building hasn’t stopped either, and New Belgrade is now the most populous part of the entire city. The Sights and Sounds

There are plenty of things to check out in New Belgrade, too. The Western City Gate (known locally simply as ‘Genex’) is one of the most recognisable structures in the city, resembling what one assumes aliens would have designed if they were involved in the New Belgrade construction boom.

Belgrade’s Museum of Contemporary Art is also here, along with the huge Sava Center and Ušće Tower. It isn’t all buildings of course, and the Park of Friendship is a large green expanse along the bank of the Danube. The Eternal Flame is nearby, erected in memory of the many innocent civilians who lost their lives during NATO’s bombing campaign in 1999. 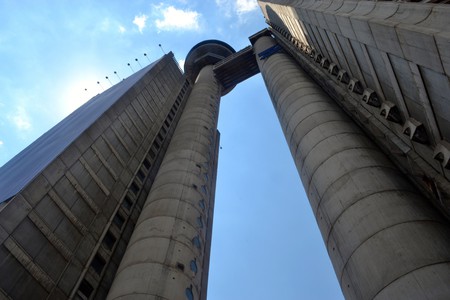 More than a Concrete Sham

Many guidebooks are quick to dismiss New Belgrade as a ‘soulless concrete sham’, but doing so disregards some of the best restaurants and parks in the entire city. Visitors who decide against venturing to the left bank of the Sava River are condemning themselves to a life without Belgrade’s best food and arguably its most genuine experience. Restaurants like Durmitor, Ćirilica and Cosi are among the best in the city, and there is also an entire street dedicated to fast food. If you’re looking for the ‘Real Belgrade’, this is exactly where to find it.

The municipality doesn’t carry a great reputation with many locals either, although a lot of this comes from a perceived reputation as opposed to actual experience, of people taking Serbian band Riblja Čorba’s Neću da vidim u Bloku 65 (‘I don’t want to live in Bloc 65’) literally. If you are moving to Belgrade and want to be surrounded by a decent standard of living, great restaurants, plenty of coffee, space and the best walking spots in the city, New Belgrade is for you. 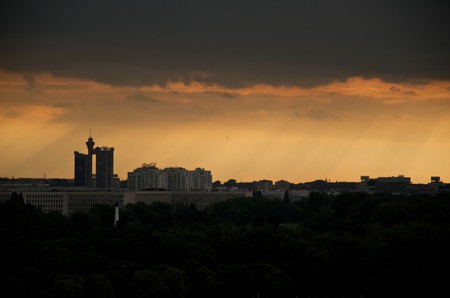 A dramatic stormy view of Novi Beograd | © Santiago S.V/flickr
Give us feedback