Most Beautiful Churches in Moscow 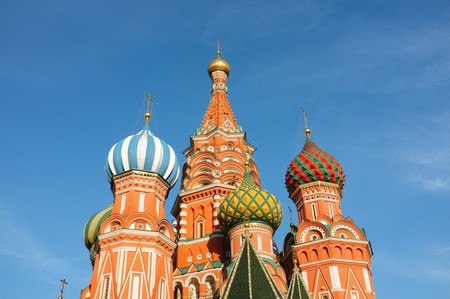 Moscow: a European gem of a city that draws in flocks of visitors each year with its culture and history. The best of Moscow‘s beauty can be seen in the stunning churches and graceful cathedrals that are dotted among modern skyscrapers and apartment blocks in the city’s iconic skyline. The sublime architecture of these religious buildings exhibits a variety of styles: from traditional Russian to lavish Italian Renaissance to Moscow’s own take on Baroque. Be enchanted by gleaming gold, intricate mosaics, world-famous paintings, and, of course, those infamous onion domes.

Lying at the very centre of the city, St Basil’s and Red Square act as Moscow‘s beating heart, from which it expands and grows. This UNESCO world heritage site was designed to resemble a bonfire, with its eclectic domes acting as flickering flames. These kaleidoscopic domes are legendary and tourists flock from all four corners of the globe to catch a glimpse. Legend has it that, Tsar Ivan the Terrible, upon seeing St Basil’s for the first time, demanded that the architect’s eyes be cut out so he could never create anything so beautiful again. Inside, St Basil’s offers visitors a wonderfully peaceful atmosphere and a stunning panorama of the Moskva River from its balcony – making St Basil’s a heavenly escape in the city’s bustling center. Come and join the crowds having their photos taken by this spectacular and one-of-a-kind cathedral or pick up one of the thousands of postcards featuring the domes of St Basil’s as a memento. 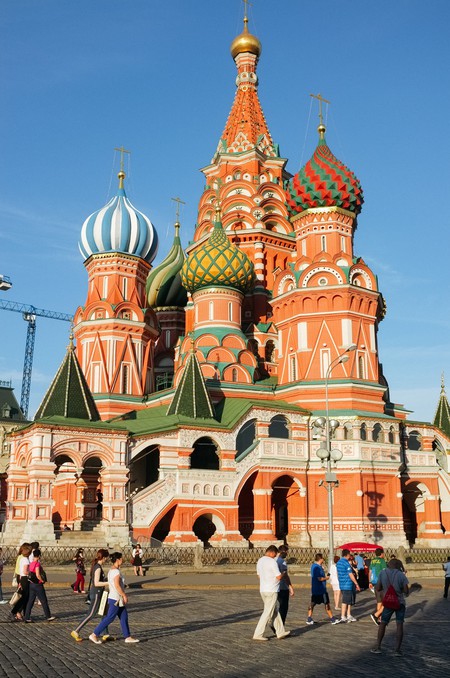 The Cathedral of Christ the Saviour

Unlike St Basil’s, the Cathedral of Christ the Saviour remains a working church and so provides visitors with a wonderful opportunity to immerse themselves in the workings of the Russian Orthodox Church. Be amazed by the fascinating traditions, glistening gold icons, breathtaking paintings, and ornate decoration of Christ the Saviour. With its immense size, the cathedral has a capacity over 1,000 worshipers and is the largest cathedral of the Russian Orthodox Church. The original cathedral was blown-up by the atheist Soviet government in order to build the largest open-air swimming pool in the world on its former site and this restored version of the church of Christ the Saviour was only completed in the year 2000. The church is also of current political interest as it was the site of Pussy Riot’s ‘Punk Prayer’ protest in 2012 and their subsequent controversial arrests. 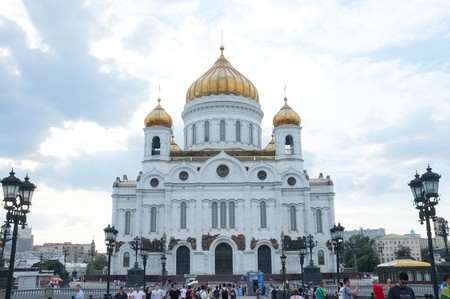 The Cathedral of the Assumption

Moscow’s Kremlin is both a UNESCO world heritage site and home to some of Russia‘s most impressive religious buildings. The Cathedral of the Assumption, the Kremlin’s oldest church, is arguably the most famous of these. The light reflecting off its gleaming gilded domes is one of the most awe-inspiring sights in Moscow’s ancient Kremlin. Unveiled in its current state in 1479, the Assumption Cathedral acted as the site on which all Russia’s tsars were crowned ever since. There has been a church on this site for far longer than 1479 however and the site was used as the headquarters of the Russian Orthodox Church from 1326 – making it one of the most important religious places in Russia. The cathedral houses the tombs of Russia’s most important religious figures. 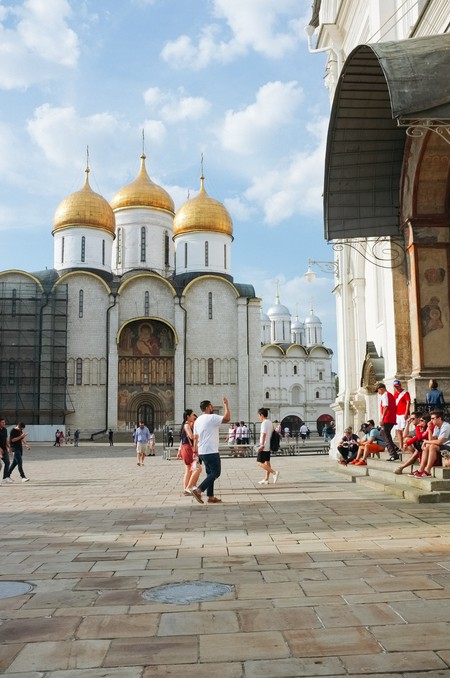 Completed in 1911, the Moscow Immaculate Conception Catholic Cathedral is the largest Catholic building in Russia. Its soaring spires and sweeping arches are simply jaw-dropping and are an exceptional example of neo-Gothic architecture. The crimson brick of its exterior is striking and the cathedral’s style was inspired by the iconic Westminster Abbey and Milan Cathedral. The Immaculate Conception Cathedral is a protected monument and listed by the Russian government as a heritage site. Masses are still said here today and services are read in a variety of languages including Russian, English, Korean, Spanish, Armenian, and Latin, to name but a few. 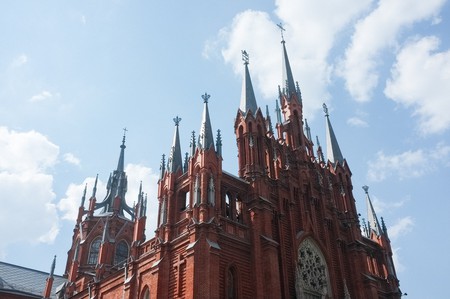 The Novodevichy Convent is Moscow’s most famous cloister. In Russian the name means ‘New Maiden’s Convent’, ironic considering the oldest building in the convent, the Smolensky Cathedral, has been dated back to 1524. The frescoes in this church are exquisite and famed for being the finest in Moscow. This cathedral is surrounded by charming little chapels and other magnificent churches. The Novodevichy Convent is also one of the best places to see Muscovite Baroque style. This former fortress was made a UNESCO world heritage site in 2004.

The Cathedral of the Annunciation

Another of the gems of Moscow’s Kremlin is the Cathedral of the Annunciation. The soaring walls of this iconic church are entirely covered in ancient frescoes and exhibit some of the best religious art in Russia. The cathedral is famed for its unique display of some of the best examples of Russian icon painting in existence. The masterpieces that adorn the walls include work by Andrei Rublev – the most famous icon painter of all time. According to legend, the Annunciation Cathedral‘s south-east porch entrance was built specially for Ivan the Terrible, who had been banned from entering through the main entrance. This was his punishment from the Russian Orthodox Church who disapproved of the fact that Ivan had married six times, three times too many in their opinion. 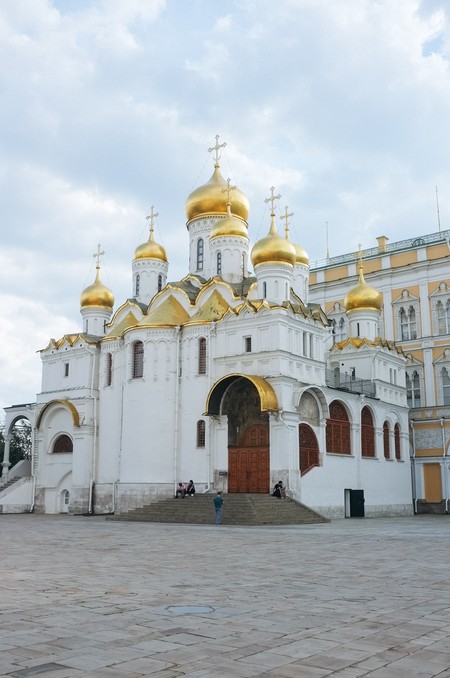 The Cathedral of the Archangel

Home to the tombs of many of Russia’s greatest rulers, the Cathedral of the Archangel in Moscow’s Kremlin, though equally sensational, differs in style from the other churches in the Kremlin complex. Known as one of the most ornate examples of Italian Renaissance architecture still in existence in Moscow today, the Cathedral of the Archangel is famed for its beauty, ornate decoration, and the shell and flower-shaped adornments of its exterior. Make sure to visit the tomb of Tsarevich Dmitri, Ivan the Terrible’s son who died in mysterious circumstances and was later impersonated by various pretenders seeking to steal the Russian throne. The oldest icon in this church is believed to date back to the 14th century. 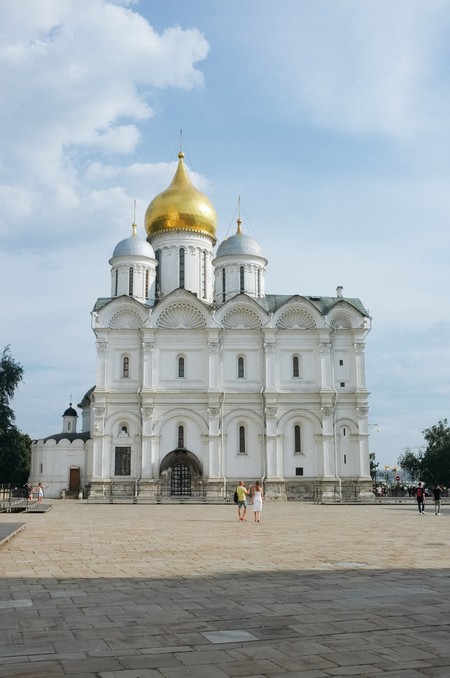 The Ivan the Great Bell Tower

Rumored to be built on the exact center of Moscow, the 81 m high monument that is the Ivan the Great Bell Tower is undoubtedly an awe-inspiring sight. Supposedly the tower was designed to resemble a flaming candle. The view from the top of the tower offers a stunning vista across the whole of Moscow. On its completion in 1600 the tower was the tallest structure in the whole city and remained so until the Russian Revolution since official decree banned the building of any structure that would outdo it. Almost as famous as the tower itself is the Tsar Bell which lies at the tower’s foot. With a height and diameter both over 6 m, it is the largest bell in the world and weighs over 200,000 kg. The bell was never used for its original purpose as one piece splintered off during casting. Instead, due to its immense size, the interior was used as a chapel and the gap left by the broken shard became its door. 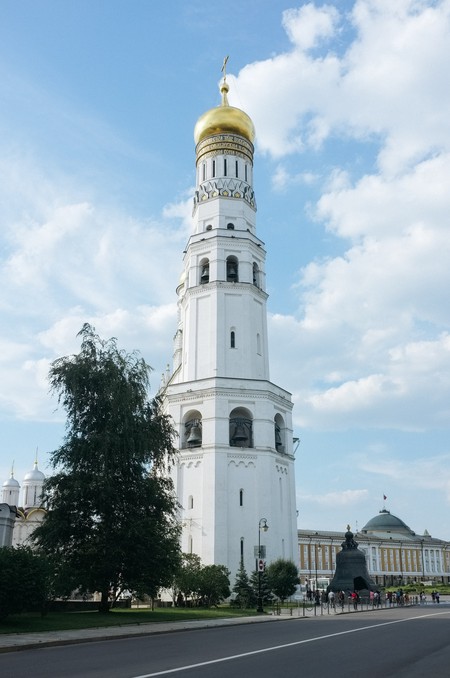