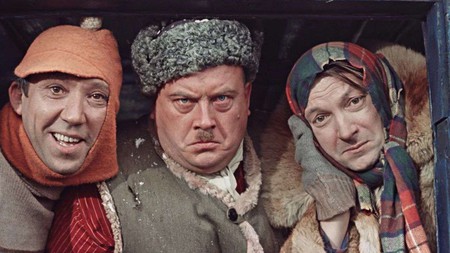 One of Russia’s most beloved directors, Leonid Gaidai wrote and directed 18 box-office smashing comedy films. The distinctive visual style, dazzling physical humor and signature discursive structure of his movies makes them relevant even today. We take a look at 7 of his best.

A short comedy film that brought Leonid Gaidai his Cannes nomination and introduced the trio of The Coward, The Fool and The Experienced who will subsequently appear in several of Gaidai’s other movies. Bootleggers generally made the 37 year old director an overnight success. The story follows three petty criminals as they try to make money by moonshining, but eventually are brought to justice by their own very responsible dog, Barbos. This comedy is Charlie Chaplin level of fun and still watchable today.

Operation Y and Shurik’s Other Adventures

The highest grossing Soviet movie of 1965, Operation Y, as the title suggests, tells the story of the adventures of Shurik, an adorable Soviet student, who from time to time finds himself in ridiculous and bizarre situations (but always finds his way out). Whether he has a face-off with his nemesis in an enclosed space, explores his newly discovered prophetic gift, or stands up against a gang of burglars, Shurik always does so with charm, dignity and humor. 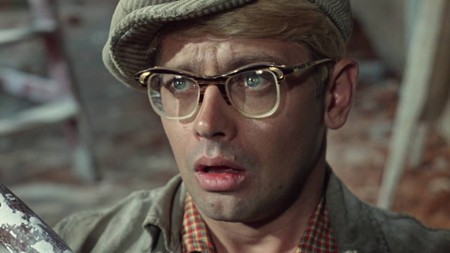 The box office hit of 1967, this story is another adventure of the popular, Shurik. This is a case of a sequel outshining the original. A hilarious take on the Caucasian tradition of bride kidnapping, this movie has everything: a nice and somewhat naïve protagonist, his beautiful no-nonsense love interest, crime, revenge, an epic car chase, a trio of likeable criminals from the previous movie and a donkey. 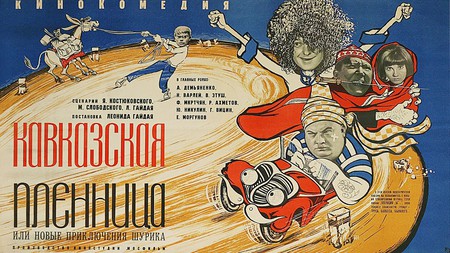 The Citizen Kane of Soviet comedy and the third highest grossing film in the Soviet history, the Diamond Arm is based on a news piece about Swiss criminals transporting jewelry in a plaster cast. The story follows Semyon Gorbunkov, a quiet family man, as he visits Italy, gets mistaken for a jewelry smuggler, and has his broken arm encased in a jewelry-filled plaster cast. Unaware of what’s inside the cast, Gorbunkov returns home, but his life will never be the same, since the smugglers are serious about getting their jewelry back!

Ivan Vasilievich: Back to the Future

The best time travel movie in Russian history, Ivan Vasilievich: Back to the Future is loosely based on a play by Mikhail Bulgakov. Shurik is back, and now he is an engineer working on a time travel machine. He accidentally sends his building super Ivan Vasilevich Bunsha and charismatic burglar George Miloslavsky back to the time of Ivan the Terrible and Ivan himself ends up in Shurik’s 1973 Moscow apartment. So while the other two are trying to survive in the medieval Russia, Shurik has to fix the time machine, keep the Tsar from exposing himself and deal with drama in his love life. Yuri Yakovlev, one of Russia’s most prominent actors, shines as both the notorious Ivan the Terrible and his lisping hen-pecked look-alike, Ivan Vasilevich Bunsha. 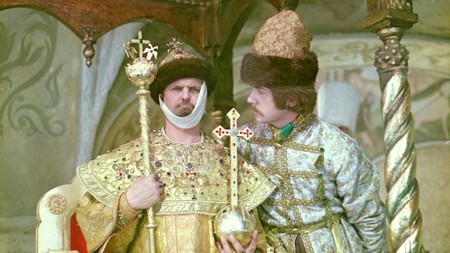 Based on the works of Mikhail Zoshchenko, this second highest grossing movie of 1976 tells three different stories, each of them tackles human weaknesses in a witty and fun manner. Crime and Punishment tells a story of dishonesty and the true nature of family relationships, Fun Adventure explores the subject of extramarital relations and Wedding event mocks hasty marriages. 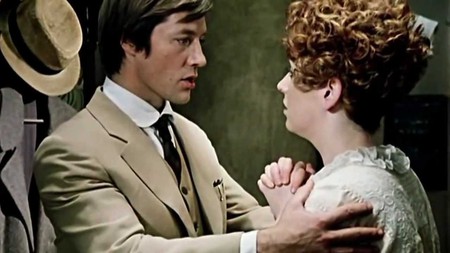 A 1982 comedy movie, that became one of the all-time Soviet box office leaders and caused a tidal wave of lottery tickets to be purchased. The story follows four travellers, as they try to track down a winning lottery ticket (which one of them purchased in the beginning of the movie and hid inside a book). Since all of them were coincidentally reading the same book, the search for the ticket gets complicated.