An Architectural Tour of Alfama, Lisbon 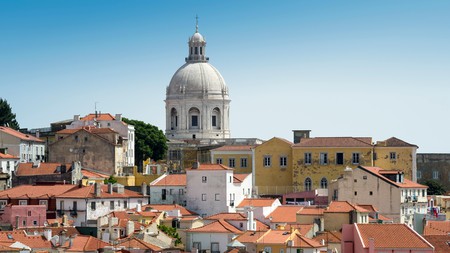 Sitting astride seven hills, Lisbon is a city of many miradouros – lookout points that crest its high points and command arresting views. Perhaps the most uplifting of these are situated in the Alfama neighbourhood, which unfurls east of the city’s crowning glory of a Medieval fortress. This old Moorish quarter and its maze of narrow, twisting, cobblestone backstreets is the only district that emerged unscathed from the massive earthquake that rattled Lisbon back in 1755.

Here, the city moves at a slower pace, with washing strung between pastel-painted, azulejo-tiled houses, kids playing in the streets and steep steps leading to tucked-away plazas and fado (folk music) bars. Alfama’s charms haven’t gone unrecognised, and cool bars, cafés and restaurants are popping up here all the time – but in many ways this quarter remains the Lisbon that time forgot. If you’re into history and architecture in a big way, a stroll here is a must.

Book Now
More of a fortress than a cathedral, with its sturdy, crenellated walls and bell towers, the imposing Sé (Largo da Sé) is your starting point – tram 12E stops right out front. This is Lisbon’s oldest religious building, dating to 1150 in its current form, though a glimpse at the cloisters reveals the underlying foundations of an earlier mosque, destroyed when Christian crusaders recaptured the city from North African Moors in the 12th century. Gothic arches rise to vaulted ceilings in the interior, where you can see the font that was apparently used to baptise St Anthony.
Open In Google Maps
Largo da Sé, Lisboa, Lisboa, 1100-585, Portugal
+351218866752
Visit Website
Give us feedback 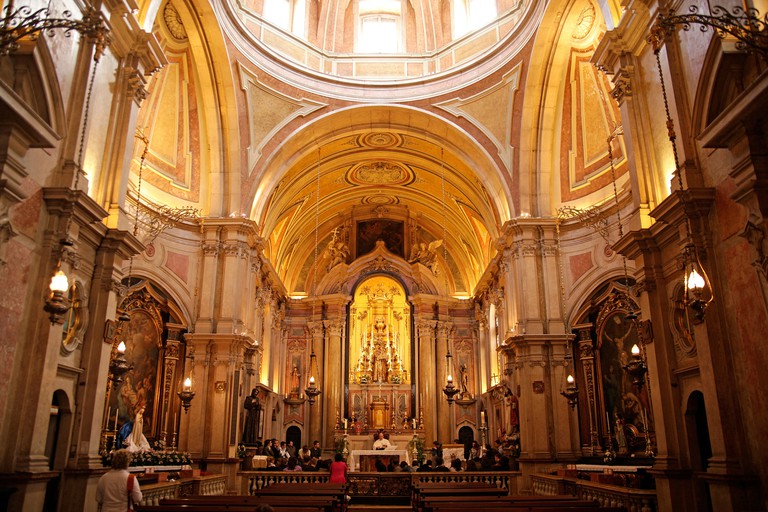 The Church of Saint Anthony was built on the spot where the saint was born | © Bildagentur-online/Schickert / Alamy Stock Photo
Opposite the cathedral is the Church of St Anthony (Largo de Santo António) built on the spot where the Portuguese patron saint was born in 1195. Once a humble chapel, it’s now a Baroque-Neoclassical church with a facade held up by ionic pillars. Its light interior is a real contrast to that of the more sombre Sé. St Anthony, incidentally, has a reputation as a bit of a matchmaker: on his feast day (13 June), there is a mass wedding at which many couples simultaneously say ‘I do’. Legend has it that anyone who manages to toss a coin into the book the statue of the saint holds will be eternally blessed with love. Give it a go.
Open In Google Maps
1 Rua General Alberto da Silveira, Lagos, Faro, 8600-594, Portugal
Visit Website
Give us feedback 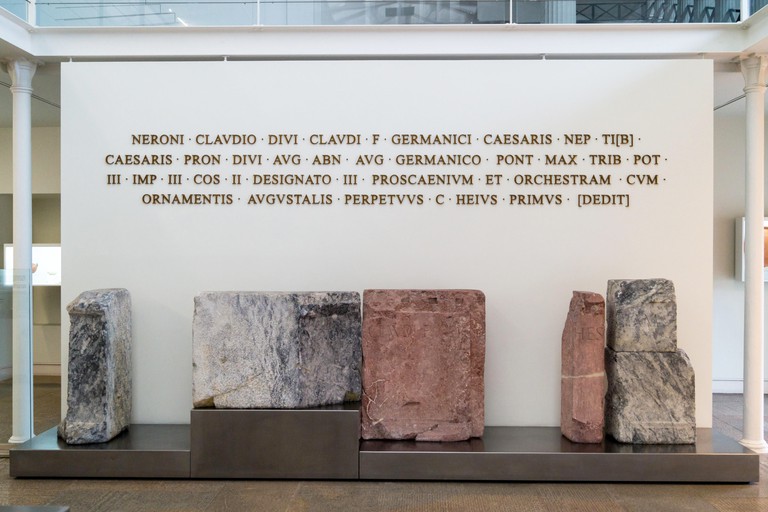 See the remains of a Roman theatre constructed during the time of Augustus | © Mark Dunn / Alamy Stock Photo
Across the way from the church is one of Lisbon’s most ancient and important architectural sites: the Roman Theatre Museum (Rua de São Mamede), a modern museum designed to showcase the era when Lisbon – then Olisipo – was part of the Roman Empire, with a population of around 30,000. Under the rule of Augustus (who lived from 63 BC to AD 14), the Romans constructed a huge 4,000-seat theatre. This was later destroyed during the 1755 earthquake and rediscovered in 1964. The impressive ruins remain. Other finds, including fragments of columns, ceramics, stelae and statues, are also on display.
Open In Google Maps
3 A Rua de São Mamede, Lisboa, Lisboa, 1100-532, Portugal
+351215818530
Visit Website
Give us feedback

A few minutes’ walk uphill brings you to this miradouro on Largo Santa Luzia, with a view out across the higgledy-piggledy Alfama quarter spilling down to the Tagus River. The lookout is named after the little whitewashed, 12th-century church that stands here, Igreja de Santa Luzia. Outside are ceramic panels of blue-and-white azulejos: the first depicts Saint Lucia, while the second shows Lisbon’s Praça do Comércio square before the earthquake struck in the 18th century, and the third portrays scenes from the 1147 Siege of Lisbon, when the Christians banished the Moors from the city. 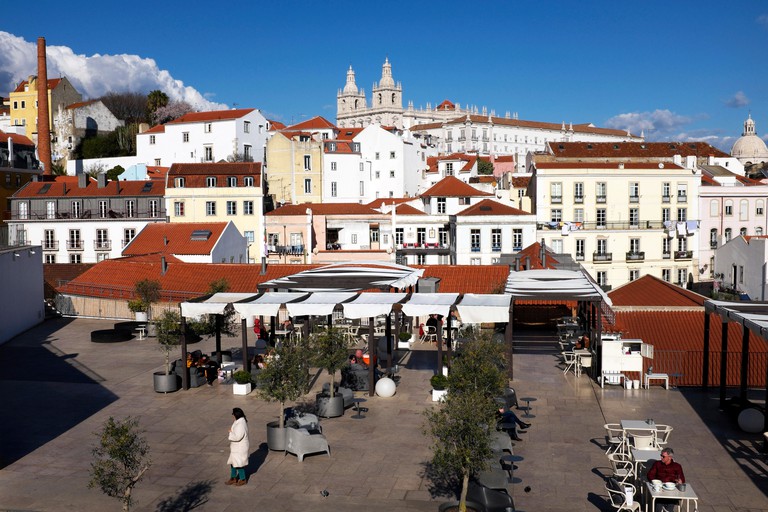 Just steps away you’ll come across the remains of the ‘Sun Gate’, one of the seven original gateways to the Moorish city. You’ll want to linger here now for the phenomenal views out over Alfama’s terracotta-tiled rooftops, domes and spires. Cross the street to visit the Fundação Ricardo do Espírito Santo (Largo das Portas do Sol), lodged in an exquisitely restored 17th-century town palace, Palácio Azurara. Its elegant, chandelier-lit rooms are filled with baroque azulejos, precious silverware, porcelain and other decorative arts.

Open In Google Maps
Lisbon, Lisbon, 1100-261, Portugal
Give us feedback 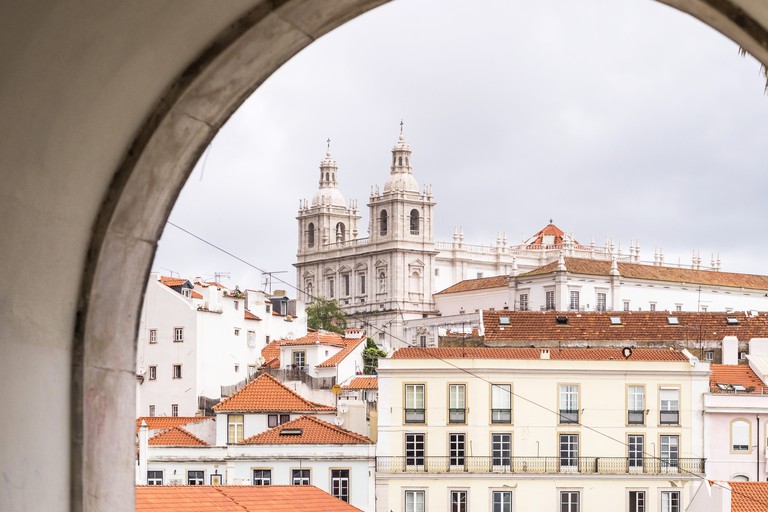 Before diving into Alfama’s tangle of back alleys, swing slightly north to one of Lisbon’s most striking architectural icons, the church and monastery of São Vicente da Fora, founded by Portugal’s first king, Afonso Henriques, for the Augustinian Order in 1147. King Philip II of Spain later gave it a complete makeover in 1580, drafting architects Juan Herrera and Filippo Terzi to build a mighty twin-towered church in the austere mannerist style of the late Renaissance. The monastery buildings and cloisters are just as impressive, lavishly decorated with 18th-century blue-and-white azulejo panels, including some playing out La Fontaine’s fables. Crusaders’ tombs lie beneath the polychrome marble sacristy.

Open In Google Maps
Lisbon, Lisbon, Portugal
Give us feedback 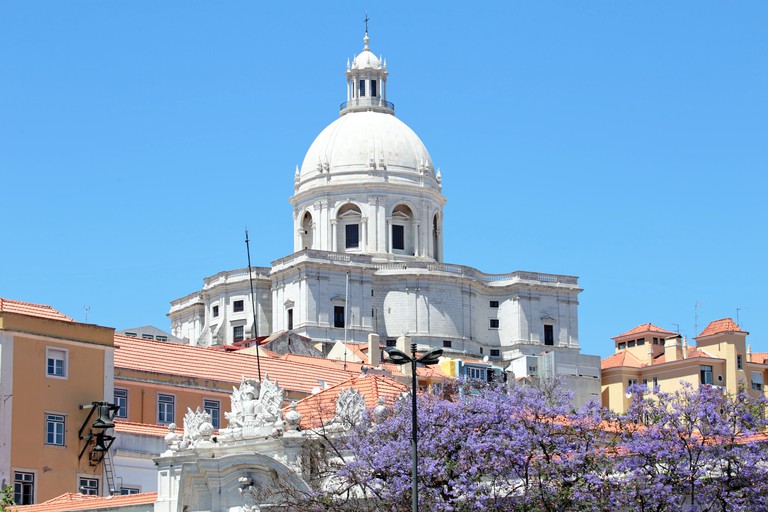 A five-minute wander from here brings you to the Campo de Santa Clara, where the Baroque National Pantheon demands attention, topped off with an enormous white dome that is visible from afar. Begun in 1681 and bearing the hallmark of the royal architect of the age, João Antunes, its Baroque design is architecturally unique, with a Greek cruciform floor plan, a high central dome and an echoing interior clad in polychrome marble. It’s a fitting final resting place for Portuguese presidents and bigwigs, and there are also cenotaphs to superstar explorers including Vasco da Gama and Henry the Navigator. 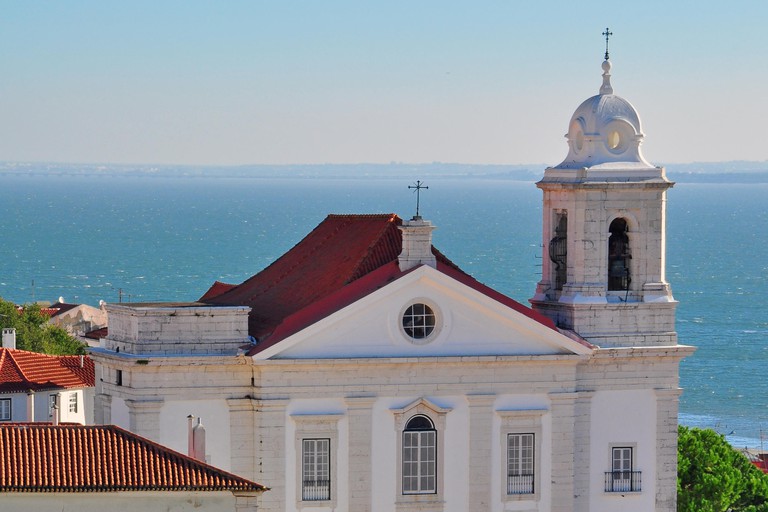 Now cut back into the lanes of the Alfama’s heart, ambling west along Rua dos Remédios to reach this bijou whitewashed church (Largo de São Miguel), with 12th-century origins. Its current look is Baroque-mannerist – simple on the outside, opulent on the inside, with gilded wood and 16 paintings attributed to 17th-century Portuguese painter Bento Coelho. 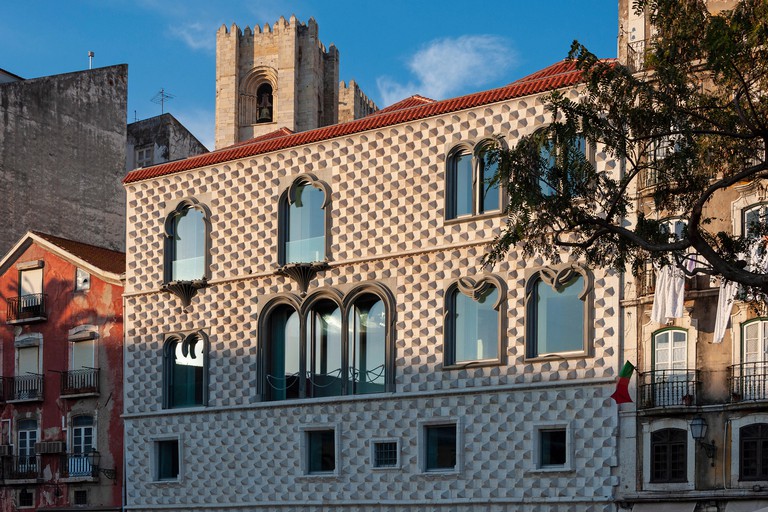 Bar, Wine Bar, Portuguese, European
Facebook
Email
Twitter
Pinterest
Copy link
Share
Map View
After architectural overload, you’ll be grateful for a coffee or a cocktail next to the infinity pool on the fabulous, river-facing roof terrace of Memmo Alfama, one of Alfama’s most eye-catching conversions. The former 19th-century shoe-polish factory has been reborn as a super-stylish boutique hotel that seamlessly interweaves historic features with minimalist design.
Open In Google Maps
27 Travessa Merceeiras, Lisboa, Lisboa, 1100-348, Portugal
+351210495660
Visit Website
Give us feedback

Stylish, Rooftop
Give us feedback