A Literary Tour of Lisbon

Lisbon’s soft light and effortless beauty makes it the perfect place to sit down with a good book under a shady palm. For a real taste of the city, it’s best to read some of Portugal’s classics in some of the places that inspired their authors to write them, from literary cafés to bustling Baixa streets, and from burnt-out churches to the lesser-known beach suburbs. 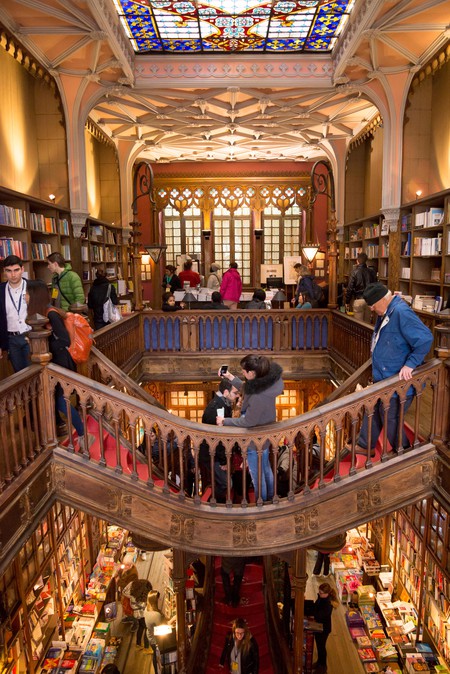 Along with Bertrand in Lisbon, Livraria Lello is one of the oldest bookstores in Portugal | © paul abbitt rml / Alamy Stock Photo

First up, seek out a decent bookshop. Fortunately, Lisbon is blessed with some great ones, none more so than Livraria Bertrand (Rua Garrett 73), officially the oldest continuously operating bookshop in the world. First opened in 1732, it sells plenty of Portuguese literature in English. And if you like record-breaking venues, what about Livraria Simão (Escadinhas de São Cristóvão 18), which lays claim to being one of the smallest bookshops in the world? Barely large enough for more than a couple of customers, it specialises in second-hand books and is well worth a browse. Or look for Ler Devagar (Rua Rodrigues Faria 103, Edifício 6-03) in the hip LX Factory, a former industrial estate now given over to workshops and studio spaces set up inside former factories and warehouses. The bookshop is, appropriately, squirrelled into the ironworks of a former printing press, with floor to ceiling walls of books an impressive backdrop to a space which also doubles as a café and gallery.

… and its weekly book market

Look out, too, for the Feira de Alfarrabistas second-hand book market in Chiado’s Rua Anchieta. Held every Saturday morning, you can usually find a diverse array of literature as well as comics and posters. Or for something quirkier, peek into the red telephone box outside Praça Londres 10. This has been converted into a cabine de leitura (literary cabin) where people can exchange books. Feel free to help yourself, as long as you leave one in exchange. 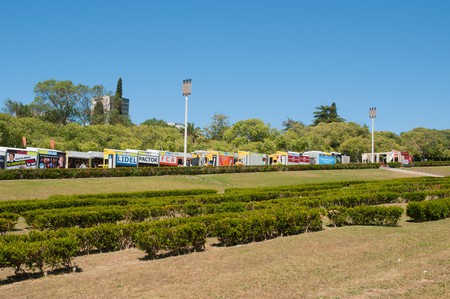 Upmarket Chiado has a range of bookshops but is best known for its bronze statue of Fernando Pessoa, which sits at the front of the famous Café Brasileira, a popular hangout for cultural figures when it first opened in 1905. Pessoa (1888-1935) was a critic, philosopher and poet whose works are now considered classics of modernism. Something of a loner, he was also a troubled soul whose works – mostly written under alter-egos he called heteronyms – were only appreciated after his death. His masterpiece is the prose work The Book of Disquiet, which describes the day-to-day life of Rua dos Douradores, one of the main pedestrianised streets of the Baixa district, little changed today from when Pessoa lived there. He also frequented nearby Martinho da Arcada, tucked under the arcades of the waterfront Praça do Comércio. You can see why he took inspiration from this café-restaurant, one of the oldest in the city. Like Pessoa’s pseudonyms, it’s gone through various personality changes in its time, operating as a gambling den and hangout for political dissidents, before its current incarnation as a slightly upmarket spot favoured by business folk and tourists admiring the views over the broad square. 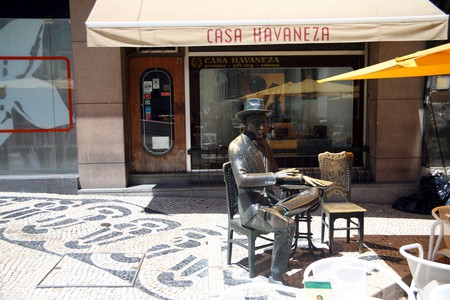 … and the literary greats who came after him

Before tackling The Book of Disquiet, consider reading some of the writers Pessoa undoubtedly influenced. Start with the splendid The Year of the Death of Ricardo Reis, by José Saramago (1922-2010). Saramago won the Nobel Prize for Literature in 1998 and sets his book in Salazar’s Lisbon just after the second world war, when an exiled doctor returns to the city and is confronted by the ghost of Fernando Pessoa himself. Today Saramago is remembered in the sumptuous Casa dos Bicos just below the Alfama, an ornate house with a pointed stone façade that partly dates back to the 16th century, and now hosts exhibitions and events related to the author.

Eça de Queiros is another Portuguese heavyweight, whose very readable realist novels shine a light on the intrigues of society in 19th-century Lisbon. Perhaps his most famous is Os Maias, which the author wrote in a beautiful 18th-century townhouse near the Museu Nacional de Arte Antiga. Today the house is one of the city’s loveliest hotels, As Janelas Verdes. Head to the top floor library and terrace for inspirational views across the Tagus. Os Maias is mostly set in Chiado and appropriately, you can see a statue of de Querios today in the district’s Rua do Alecrim.

Talking of statues, one of the most dramatic is the statue of Adamastor at the Miradouro de Santa Catarina. This mythical beastie featured in Os Lusíadas, Luís de Camões’s epic poem of 1572 which describes Vasco da Gama’s first visit to India. The miradouro (viewpoint) offers inspirational views over the river from where Vasco da Gama set sail, and remains one of the city’s most popular spots at sunset, with its own kiosk café-bar.

Follow the trail of foreign writers who were inspired by Lisbon

Historical Lisbon has also provided source material for many non-Portuguese writers, too. American author Richard Zimler delved into Lisbon’s murkier past for his best-selling novel, The Last Kabbalist of Lisbon. Part historical drama and part murder mystery, it looks into the aftermath of the massacre of Jewish converts in the city in 1506. Today, Lisbon Walkers offer guided walks that take you to the places that feature in the novel, including the old Jewish quarter in the Alfama. Perhaps the most poignant of these is the Igreja de São Domingo, a church in the Baixa. This stands on the site where sentences were read out during the Inquisition. A fire ripped through the church in the 1950s which some say helped to purge the memory of the awful massacres that took place on this spot: you can still see the charred pillars today.

British author Robert Wilson uses contemporary Lisbon as the backdrop to his page-turner A Small Death in Lisbon, in which the discovery of a body on the train line to Cascais opens up a can of worms for an investigating police officer, taking him back to dealings in the Second World War. The policeman, Zé Coelho, lives in the suburb of Paço de Arcos, which is also one of the train stops on the line to Cascais. The line is surely one of the best suburban rides in Europe, running right along the edges of the Tejo, and for a taste of Lisbon off the tourist track, you could do a lot worse than visit the detective’s haunt which even boasts its own beach.

Not all foreign writers have been impressed with the city. Henry Fielding, author of Tom Jones, visited in 1754 thinking the climate would improve his health. It didn’t, and after calling it “the nastiest city in the world” he died there. His grave can be visited today in the leafy Cemitério Inglês near the lovely Estrela gardens.

Chat about books with Lisbon bibliophiles

Finally, you could always join the Meet Up group organised by the Bivar Bookshop, in which you can chat (in English) about books with other literature fans. They’ll no doubt point you to some of the other experimental but highly readable authors influenced by Pessoa: Lisbon-born António Lobo Antunes is the current heavyweight, his books influenced by Portugal’s colonial past and his own experiences fighting in Angola. The Return of the Caravels artfully blends the exploits of Vasco da Gama with the collapse of the Portuguese empire. Another joy is The Piano Cemetery, a mosaic of a love story based around a Lisbon piano workshop by poet and author José Luís Peixoto.

The book on most people’s lips at the moment is Pedro Chagas Freitas’s The Day I Found You. Another experimental gem, it blends together sentences sent to him by his Facebook followers in an attempt to explain love: not an easy read, but with some memorable sections.

With its history of discovery and exploration, it is perhaps not surprising that Portugal’s literary scene has set sail so successfully in recent years. Head to Lisbon, book in hand, and you won’t leave disappointed.

*This article is an updated version of a story created by Andrew Ricca.