Where to Find the Best Beaches in Europe 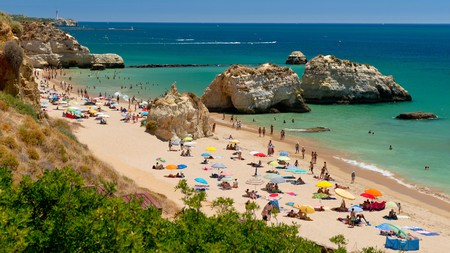 The Algarve in Portugal has recently been announced as the leading beach destination in Europe at the World Travel Awards 2020. Culture Trip takes a closer look at one of the cleanest, and safest, places to holiday in the world.

With all the major challenges faced by the travel industry in 2020, it’s comforting to know that some things never change.

The Algarve region is the southernmost area of mainland Portugal, and this popular collection of 16 stunning municipalities has been announced as Europe’s best beach destination for a record seventh year. The victory in this prestigious category is also the sixth consecutive win at the awards for the Algarve. 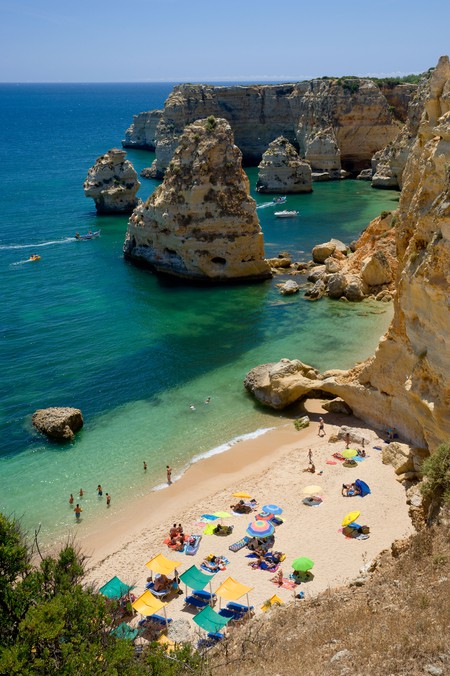 “In a year as troubled as 2020, receiving this award and continuing to earn the trust of travellers from all over the world is extremely rewarding,” says João Fernandes, president of Turismo do Algarve.

“This distinction recognises not only the quality of our beaches and our offer, but also shows that the Algarve continues to be a safe destination for holidays and complies with public health protection rules,” Fernandes adds.

The best beaches in the Algarve

As one of the first places in the world to reopen its beaches this year in line with updated safety measures, the Algarve has once again taken steps to maintain its hard-earned reputation. The region boasts 300 days of sun every year and has developed 87 beaches that meet the Blue Flag standard of excellence.

Away from the coast, visitors have access to excellent cycling routes and hikes suitable for all levels. Each of the 16 municipalities that make up the region also offers diverse experiences that delve into the heritage of the area.

The beaches themselves are diverse, with relaxing, secluded spots that will keep you away from the crowds as well as a selection of family-friendly spots. Here’s a quick look at our favourites.

When you think of picturesque Portuguese beaches, this beach may well be what you imagine. Situated in Portimão, which has hotels, restaurants, museums and attractions for all the family to enjoy, the beach itself is popular with locals and visitors from around the world. Praia Rocha is close to Faro Airport, so it’s convenient for a long weekend if time is an issue. 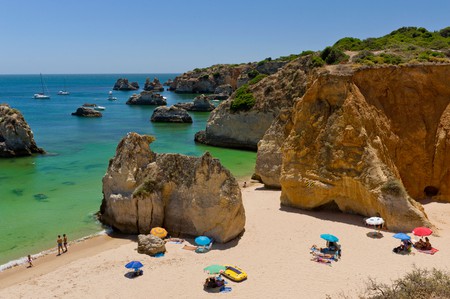 This is another popular beach that benefits from the fact that it so big. Its size means you can find decent lounging space even when things get busy, which is going to be an even greater consideration in the next few months. Portugal has also emerged as a popular surfing destination in recent years, with Praia do Tonel’s surf school one of the best in the Algarve. 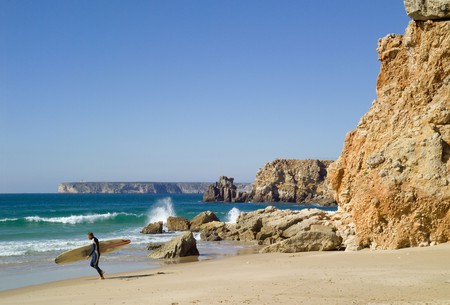 Praia do Tonel is very popular, but also very big, so you can always find some space | © Mikehoward 1 / Alamy Stock Photo

This pick is off the beaten path, and as such doesn’t have much in the way of modern amenities. Luckily, the beach – located right where the Atlantic meets the Mediterranean – speaks for itself. The sheer cliffs that surround you might not make it the best spot for pictures, but the high natural features protect you from the blustery winds that can pick up. This is also another popular spot for surfing, and the tubular waves are among the best in the world. 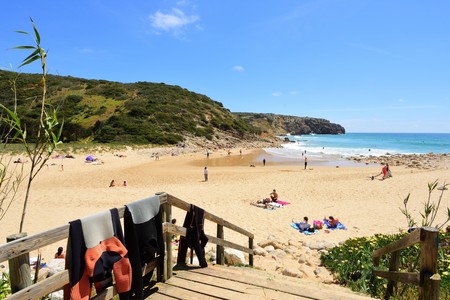 Situated in Lagoa, Praia da Marinha is rated by the Michelin Guide as one of the top 10 beaches in Europe and one of the best in the world. If you’ve seen a picture of a Portuguese beach, chances are it will be this one, as it is used in lots of guides to the country. The beach is small, though, and not very easy to reach. As a result it is rarely as busy as some of the others on our list. The cliffs, natural stone arches and clear water make this a dreamy destination you will want to explore on any trip to the Algarve. 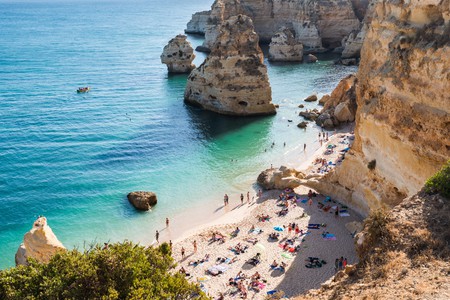 Ilha de Tavira, or Tavira Island, lies a few hundred metres off the coast of the mainland. It has 11km (7mi) of beaches and allows naturism in some areas. The town of Tavira has a fascinating heritage that includes a period of rule under the Moorish regime. You can still see some aspects of this period in the architecture of the town centre, and name Tavira is derived from the Arabic for “the hidden”. Fishing may not be the big industry it once was in the region, but you can still also find a lot of fishing artefacts here. 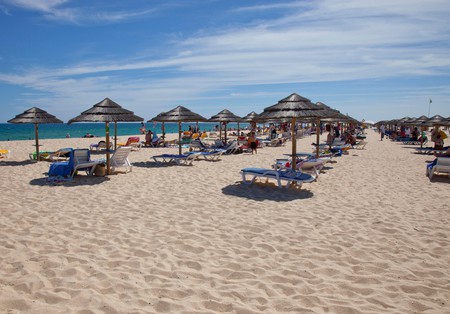 Ilha de Tavira, or Tavira Island, lies a few hundred metres off the coast of the mainland | © Parallax Visual Media / Alamy Stock Photo
Give us feedback