The Best Hotels to Book in Porto for Every Traveller 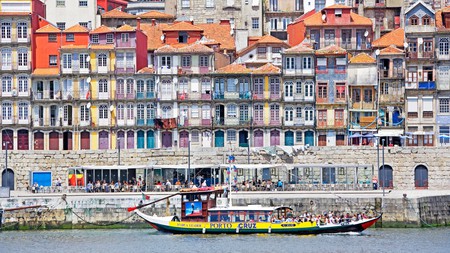 Porto is the second-largest city in Portugal, where you can eat cod in the Gomes de Sá style and wash your desert down with a glass of world-famous Port wine while taking in views of the River Douro and the iconic Luiz I Bridge. The city has a wide range of attractive hotels to suit the needs and budgets of most travellers, here are some of the best – all bookable with Culture Trip. 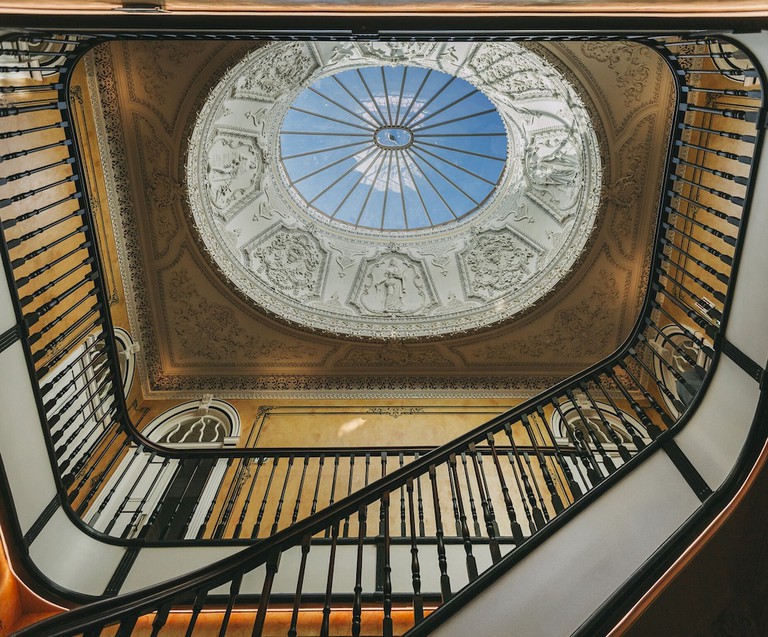 Courtesy of Torel Palace Porto / Expedia
View Rooms
Price Drop
Now from $253 per night
Torel Palace has an elegant 19th-century facade topped by an impressive domed skylight. The rooms, all named after great Portuguese writers, are the epitome of palatial, enriched with high ceilings ornate with stucco work. In the Royal Suites, bathtubs come in illuminated onyx, hidden in mirrored cabins. Downstairs, Blind Restaurant (a nod to Saramago’s novel Blindness) draws on local produce. Tables spill out under the pink facade and overlook an emerald green lap pool.
More info 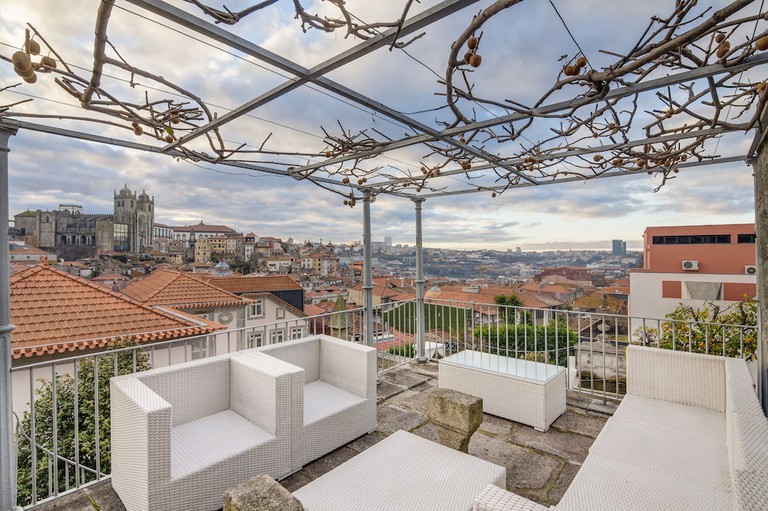 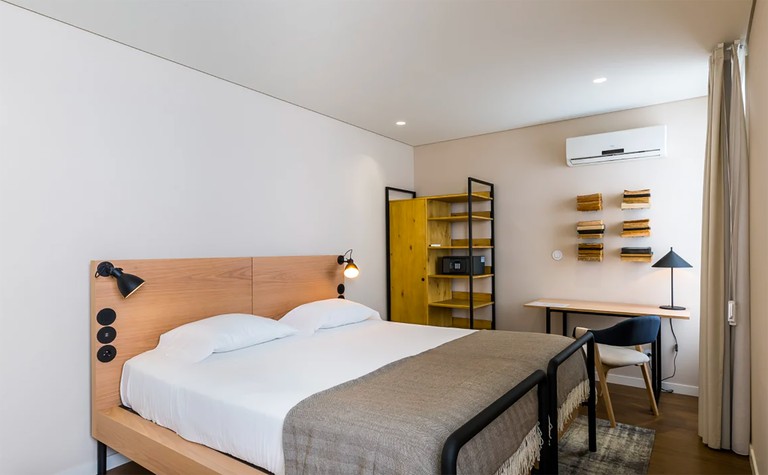 Courtesy of Gallery Hostel Porto / Hostelworld
Book Now
This hostel offers not only affordable accommodation but an immersion into the art world with a permanent gallery. Dormitories and rooms are named after artists who played a role in the cultural evolution of the city and include twin and triple rooms, four- and six-bed dorms, as well as a six-bed all-female dorm. It all sits within a beautifully restored early 20th-century building in the trendy Miguel Bombarda district. 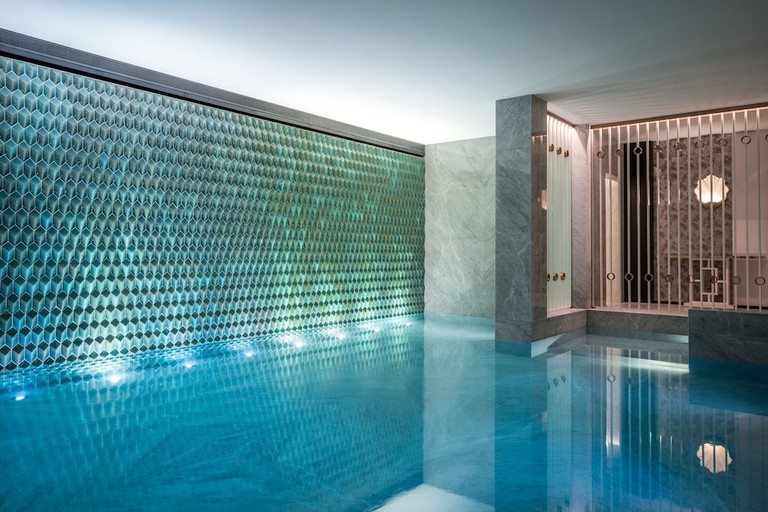 Courtesy of Maison Albar Hotels Le Monumental Palace / Expedia
View Rooms
Price Drop
Now from $271 per night
Le Monumental Palace is an essay in art deco elegance. Housing 63 luxurious rooms and 13 suites, many with glorious views over the city, there’s also a spa with a dazzling indoor swimming pool. Food is worth lingering over, from the sushi and sashimi at Yakuza by Olivier to the elegant Le Monument where French chef Julien Montbabut brings his considerable skills to the Portuguese table.
More info

Courtesy of Vincci Porto / Expedia
View Rooms
Price Drop
Now from $86 per night
Housed in what was previously the Bolsa do Pescado (fish market), long an emblematic landmark in Porto, Vincci has 95 sleek rooms with bold decor and a restaurant, 33 Almeda. There, between the marble columns, try the octopus carpaccio and the traditional bacalhau (dried cod) with chickpeas and cornbread. Walk it off along the bordering River Douro.
More info 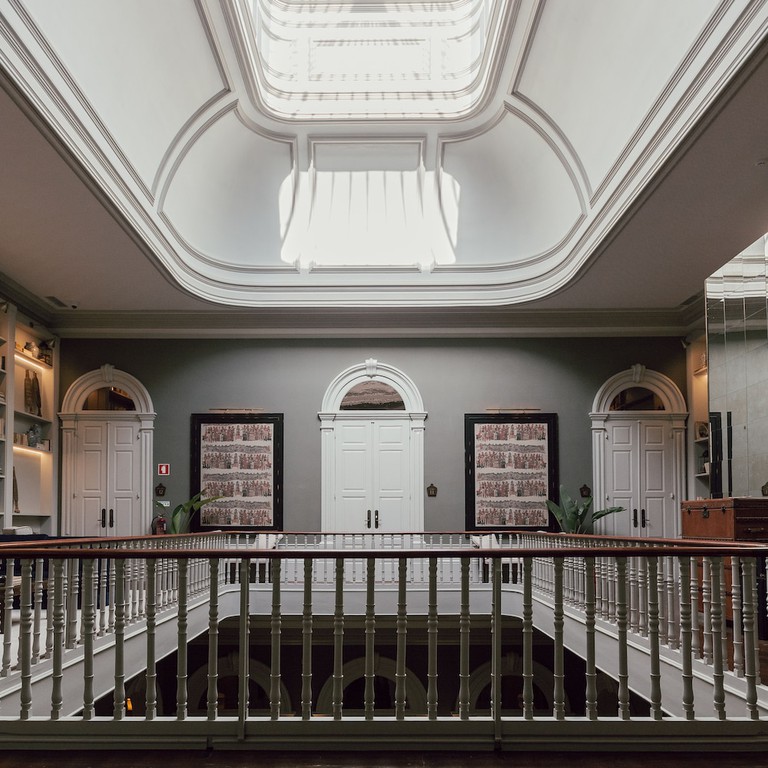 Courtesy of Torel 1884 / Expedia
View Rooms
Price Drop
Now from $124 per night
Beautifully restored to its original 19th-century glory, this 12-room former palace pays homage to the navigators who brought prosperity to Portugal and started its Golden Age. Interiors are impressive with rooms radiating off a grand central staircase. Expect open bathtubs, exquisite silks and high ceilings. On the ground floor, Bartolomeu Bistro is the perfect place to explore local wine.
More info 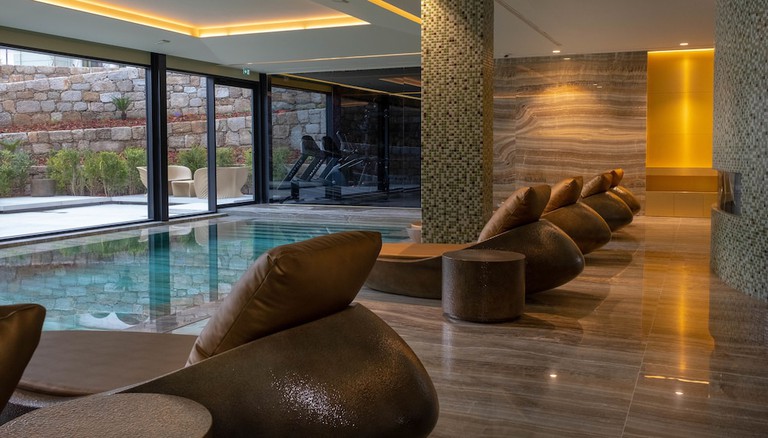 Courtesy of Vila Foz Hotel & SPA / Expedia | Courtesy of Vila Foz Hotel & SPA / Expedia
View Rooms
Price Drop
Now from $231 per night
In the desirable district of Foz, where the Douro meets the Atlantic Ocean, stands the stately 19th-century Vila Foz. Just seven rooms and a restaurant exist in the original villa, with many period elements still in place from tiles to parquetry to high, stucco ceilings now painted in pistachio greens and macaroon pink. Linked by a corridor is the modern wing with 61 further rooms, a spa and an indoor pool, all designed by Nini Andrade Silva.
More info 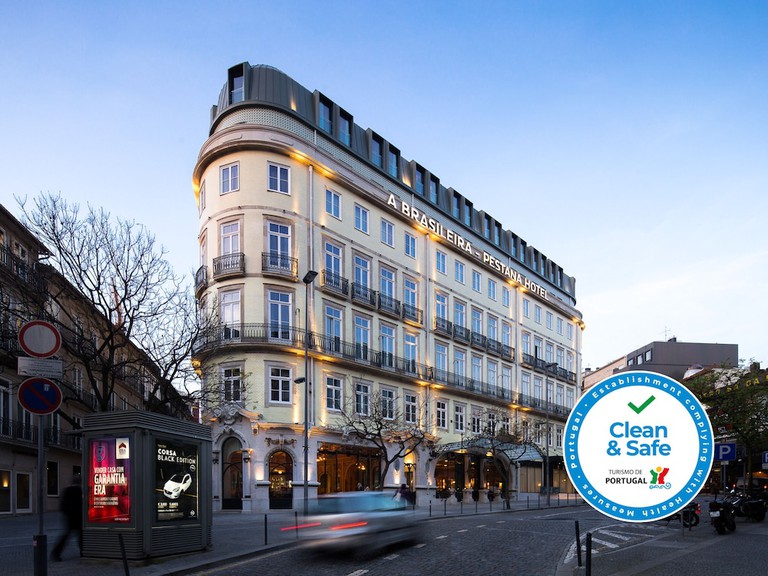 Courtesy of Pestana Porto / Expedia
View Rooms
Price Drop
Now from $140 per night
Housed in the iconic Cafe A Brasileira, which opened in 1903 and was the first place to serve coffee in a cup, this new hotel has 89 rooms and suites across several floors. Each floor takes inspiration from one of the spices or products brought back during Portugal’s maritime expansion from coffee to pink pepper. The ground-floor restaurant is well worth a visit with delicious food and a lively, fun atmosphere.
More info 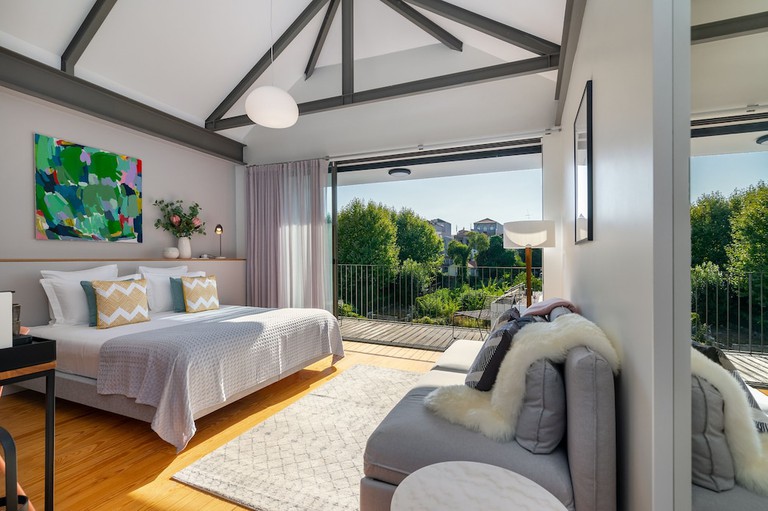 Courtesy of Canto de Luz / Expedia
View Rooms
Price Drop
Now from $87 per night
This charming B&B offers a variety of rooms from light-filled garden-view suites to the Urban Retreat Suites, which come with a patio and kitchen. There’s also the two-bedroom Villa Almada, set in the gardens of the main house, which has a private pool and a chef on request. All rooms come with Nespresso machines and Amazon smart speakers. Breakfasts here are legendary, with an ever-changing rota of delicious products sourced from the local markets.
More info 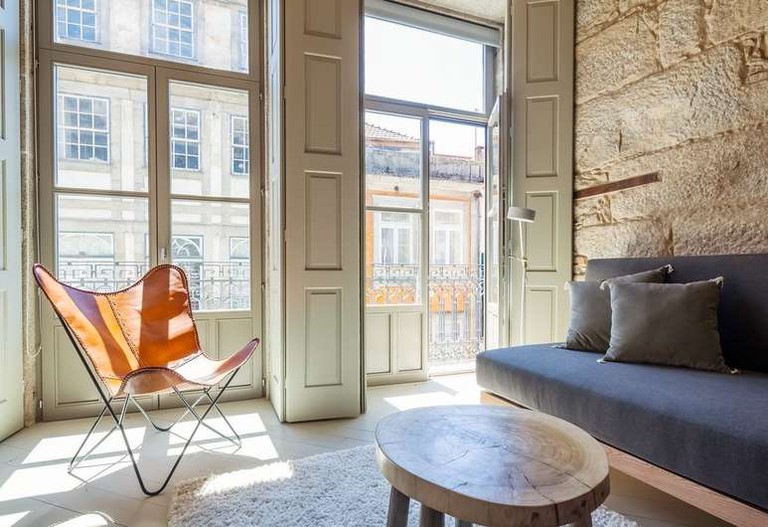 Porto is filled with unique architecture and Armazém, based inside a 19th-century iron warehouse, is one of its most extraordinary hotels. Run by a mother-and-daughter team, it’s filled with special touches and experiences, such as yoga classes and city tours, so guests can enjoy a memorable stay. This lovely 12-guest room hotel is also family-friendly and offers babysitting services for an additional charge. 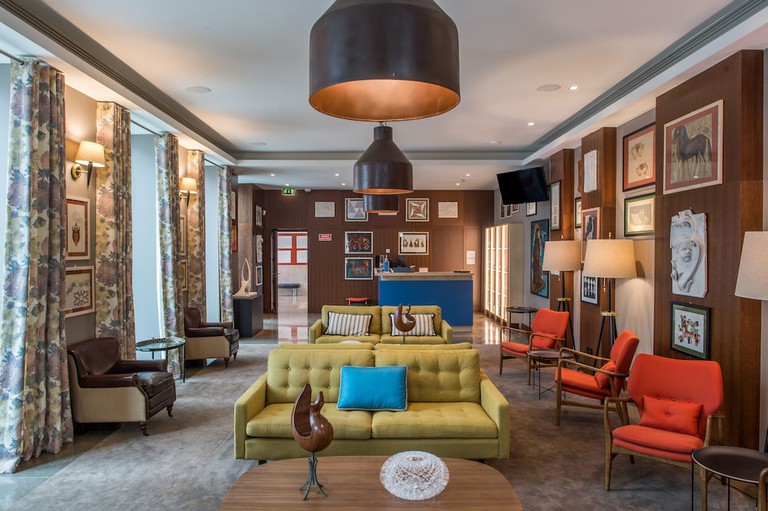 The 17 guest rooms, bistro and bar of The Artist are decorated and maintained by students at The School of Hospitality and Tourism of Porto. This is a vibrant hotel where rooms are filled with classic furniture and an array of artwork and photography. In the restaurant, you can sample local flavours with a tasting menu. And when it’s time to explore, it’s just an eight-minute walk to the traditional Bolhão market and just a few minutes to the trendy shops on Rua de Santa Catarina. 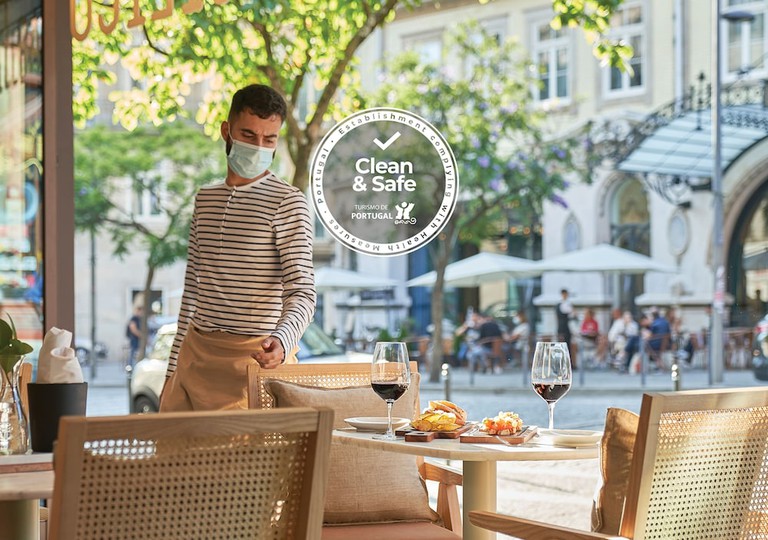 Courtesy of Teatro Boutique Bed & Breakfast / Hotels.com | Courtesy of Teatro Boutique Bed & Breakfast / Hotels.com
View Rooms
Price Drop
Now from $97 per night
The centennial gold- and bronze-trimmed Hotel Teatro is located in the heart of the city and near the beautiful azulejo-covered São Bento train station. Special features include a box office instead of a reception desk, a luxurious restaurant, and tickets for room keys. The 74 guest rooms are divided into four styles, each spacious and decorated with a modern style.
More info 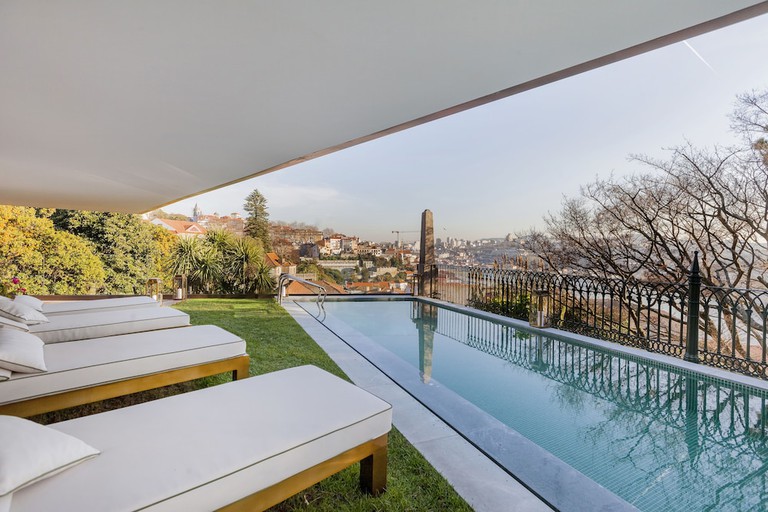 Hotel Torel Avantgarde has 47 guest rooms with decor inspired by a mix of international and Portuguese artists, such as Nina Simone, Oscar Wilde, Leonardo da Vinci and Fernando Pessoa. You can enjoy a range of spa services, book a babysitter and sample fine dining at the hotel restaurant. 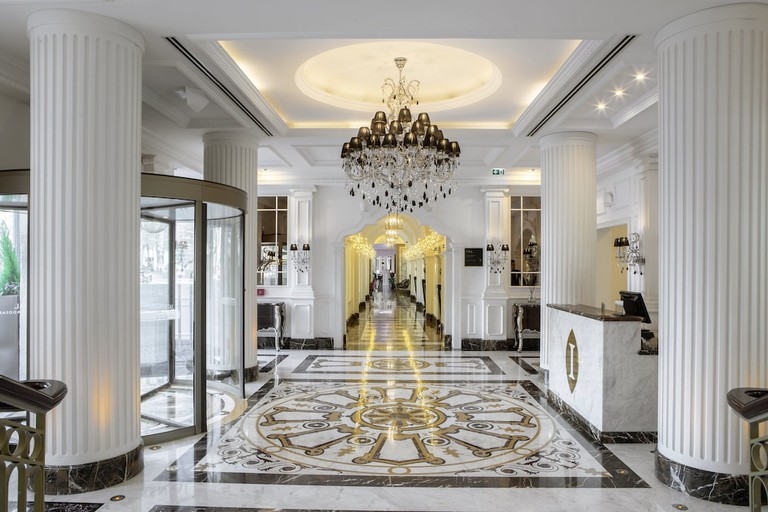 Courtesy of InterContinental Porto – Palacio Das Cardosas/Hotels.com
View Rooms
Elegant with a mix of old-world beauty and contemporary style, InterContinental Porto is a grand hotel within a historic 18th-century palace. Conveniently located in the centre of Porto, it’s close to several landmarks, including the São Bento train station, the Torre dos Clérigos and the Sé do Porto. Although it has been completely restored, the hotel maintains charming decor and antique furnishings inside the 105 guest rooms. Special features include a library bar, a gourmet restaurant and classically designed rooms.
More info 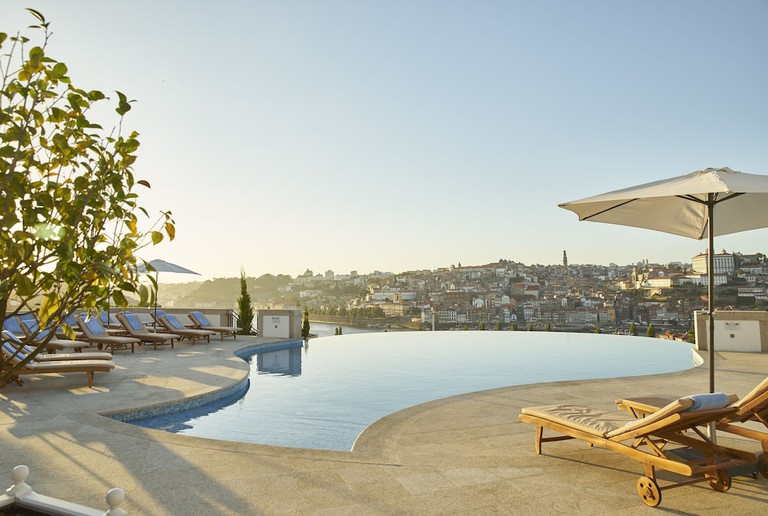 Courtesy of The Yeatman Hotel/Hotels.com
View Rooms
Price Drop
Now from $254 per night
Plan a romantic experience in Porto ending each day in The Yeatman Hotel, a luxurious spa resort. Antique and elegant, this spot offers up amazing views over the rooftops and across the River Douro from Vila Nova de Gaia. In addition to the 83 guest rooms and spa services, it has a rooftop infinity pool, gourmet restaurant and regal bar.
More info 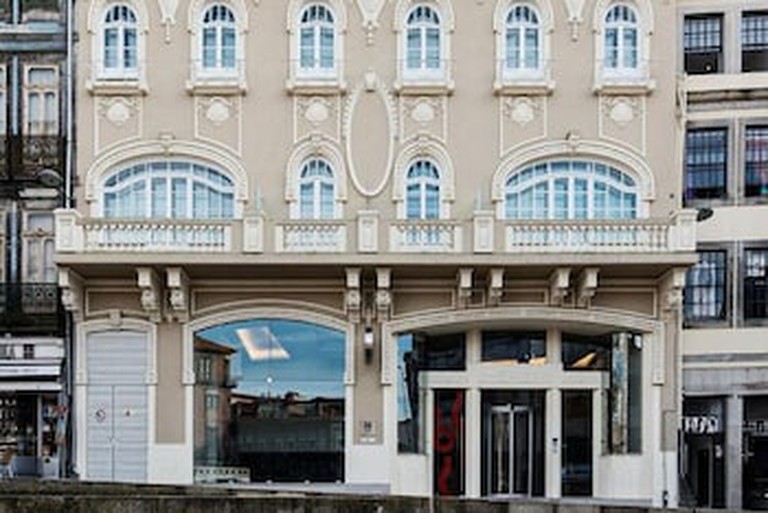 Moov Hotel is a unique, historic and budget-friendly spot located in one of the oldest squares in the city between the 18th-century Saint Ildefonso Church and the classical São João National Theatre. An elegant façade opens into the century-old, art deco-inspired building that was once a movie theatre but was eventually converted into this trendy film-themed hotel. It’s located within easy walking distance of the Sé Cathedral, Majestic Café and the Ribeira district.

This is an updated version of an article originally written by Nina Santos.

Looking for more? Inspire your itinerary with the top things to see and do in Porto, including the best beaches nearby. And don’t miss a taste of the best restaurants in Portugal’s second city.