An Introduction to Frederic Chopin in 5 Works 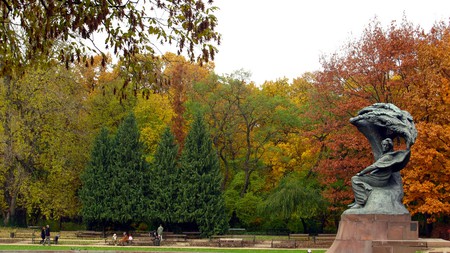 Born in 1810, Fryderyk Franciszek Chopin actually spent most of his life away from his native Warsaw. However, today he is recognised as the most famous classical pianist from Poland, having given the world pieces that continue to exalt and excite. Here’s an introduction to the great composer in just five awesome works…

Also called ‘Etude Op. 10, No. 12 in C minor‘ or, more pointedly, ‘Étude on the Bombardment of Warsaw‘, this frantic piece of piano work was created by the great composer sometime after 1831. Striking heavy high notes and a fluttering treble line of continuously cascading scales, it perfectly captures Chopin’s pain and frustration at a failed Polish uprising against Imperial Russia. Known as the November Uprising, the episode became one of the defining moments in the Slavic national struggle against the partitioning of Poland; a cause that Chopin himself felt intimately connected to from his adopted home across the continent in Paris.

‘The Funeral March‘, or Chopin’s ‘Piano Sonata No. 2‘, is surely amongst the most recognisable of all the composer’s works. The slow and plaintive scherzo of the stepping piano, mixed with the building crescendo of both minor and major keys, is the trademark of the piece, which was actually played at Chopin’s own burial in Paris’s Pere Lachaise Cemetery (and JFK’s and Churchill’s funerals as well!). More than anything, critics have noted how the piece reveals the influence of another great European composer: Beethoven. There are phrases that mimic the ups and downs of the German’s ‘Piano Sonata No. 32‘, and a finale that uses the cadences of Beethoven’s early variations.

Classical pianists have long dreaded the intricacies of Chopin’s most famous polonaise. Packed with chromatic perfect fourths and snappy arpeggios, awkward grace notes and octaves at diametric ends of the piano, it’s considered one of the most technical pieces of all to master. The form – the polonaise – is a nod to the influence of his home nation, while the piece as a whole was championed as an ode to the heroism and ideals of the 1948 revolution in France by Chopin’s life companion, the subversive female writer George Sand.

The twinkling ups and downs of this majestic piece in C-sharp minor form one of Chopin’s most widely played works. Using intricate cross-rhythms and key changes, the composer weaves a melancholic tune with a certain mystical undertone. Critics have noted how both the form and the sound is similar to Beethoven’s famous ‘Moonlight Sonata’, which also makes use of the plaintive tones of C-sharp minor. ‘Fantaisie-Impromptu’ was actually left unpublished until 1855, after Chopin’s death. Theories as to why range considerably. Some think Chopin was paid a commission for the work, while others feel the integral phrases lack the distinct “nobility” of his other pieces.

Molto vivace – so reads the tempo indication on ‘Minute Waltz‘, published in Leipzig in 1847. Vivace it certainly is, jumping up to high crescendos and down to low, thudding base notes with all the speed of a snowflake caught in the wind. The work is tellingly dedicated to the Polish countess Delfina Potocka, who – like Chopin – was an expat in France, and a self-proclaimed muse to many of the Romantics of the day. More than once did the great composer remark on her beauty and elegance. It’s been suggested that the ‘Minute Waltz‘ was an expression of his love for Potocka (although that’s been debunked by the uncovering of forged love letters between the two), while most think it’s simply an ode to a fellow patriot in whom he saw Hazlitt’s so-called Spirit of the Age.