The 10 Best Pieces of Architecture in Podgorica, Montenegro

With a compelling and complex history dating back to the Middle Ages, Montenegro is a country whose buildings charmingly reflect its colorful heritage, and combine a variety of designs including Ottoman and Soviet styles. And the country’s capital, Podgorica, is an ideal place to explore such architectural wonders. During the heavy bombing of Podgorica in World War II a number of the city’s previously prominent structures were destroyed, allowing for a communist design movement to then flourish. With this diverse and enthralling combination of building desgins, Podgorica’s streets make for a fascinating architectural expedition. Here’s our guide to the 10 best pieces of architecture in the area. 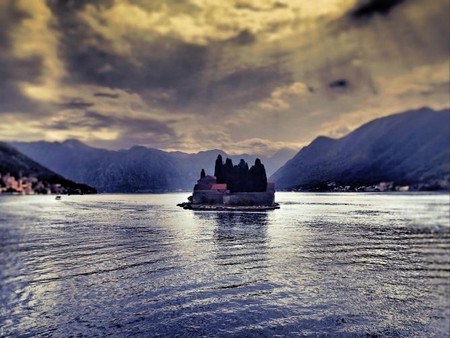 Standing alone in the Bećir Beg Osmanagić Square in the heart of the city center, the Sahat Kula, or clock tower in English, is an iconic landmark symbolizing Podgorica’s resilience and triumph over hardship. This imposing structure, 16 meters in height, is situated in the historic neighborhood of Stara Varoš, most of which was destroyed during the World War II bombings, a time when the area lost a number of its original Turkish buildings. Built in the 17th century, the Sahat Kula was constructed with typical Ottoman precision and attention to detail, and is a near perfect rectangular prism which dominates the area and immediately captivates the attention. The clock tower has a rich and complex history in itself, having been damaged when Prince Eugene of Savoy invaded Podgorica with his army in 1697, then subsequently restored. It has also been used for a number of purposes, and has served as a prison as well as a popular meeting place.

Connecting the two sides of the city divided by the Morača River, the Millennium Bridge not only provides an important function for Podgorica’s residents, but is one of its most outstanding pieces of modern architecture. Designed by civil engineer Mladen Ulicevic, a respected professor at the Faculty of Civil Engineering in Podgorica, the bridge is of a modern and innovative cable-stayed design which operates using a complex system of counterbalances, with its pylon reaching 57 metres above the road. The bridge was officially opened on the 13th of July 2005. This date marked the anniversary of The Uprising of Montenegro in 1941, where a large group of insurgents, led by the Communist Party of Yugoslavia, staged an uprising against Italian occupying forces. 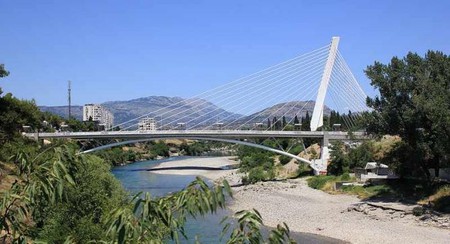 This rustic landmark is Podgorica’s oldest bridge, lying in stark contrast to the contemporary design and style of the Millennium Bridge. Though the origins of the bridge aren’t well documented, it is said to have been built in the 15th century by the Turks, and is believed to be one of the last remaining structures of the ruined town of Nemanja, a region which stood within Podgorica centuries ago. Designed to connect the two sides of the city divided by the Ribnica River, the Sastavci bridge was once an essential lifeline for the citizens of Podgorica, and is today a wonderfully picturesque and romantic spot popular amongst couples, as well as the highlight of many of the city’s walking tours.

Building
Facebook
Email
Twitter
Pinterest
Copy link
Share
Just as innovative conceptually as it is architecturally, the UNDP Eco-Building is the first of its kind in Montenegro. Bringing together a number of agencies including UNICEF, UNHR and IOM under one roof, the purpose of the eco building is to support the Montenegrin people, and to create initiatives which will improve the country’s resources and the quality of life of its citizens. The concrete and steel building was designed by prominent architect Daniel Fügenschuh to be energy efficient and environmentally friendly, as well as sleek, modern, and perfectly aligned with its surroundings. The layout of the building was conceptualised in order to provide a natural cooling system for the summer months, and heightened insulation during the winter, and is run on thermal energy drawn from Photovoltaic panels on top of the building. Officially opened by the Montenegrin president Filip Vujanović and Deputy UN Secretary-General Jan Eliasson in 2014, the UN Eco Building is an ingenious and ground-breaking piece of modernity which is a must visit on the banks of the Morača river. 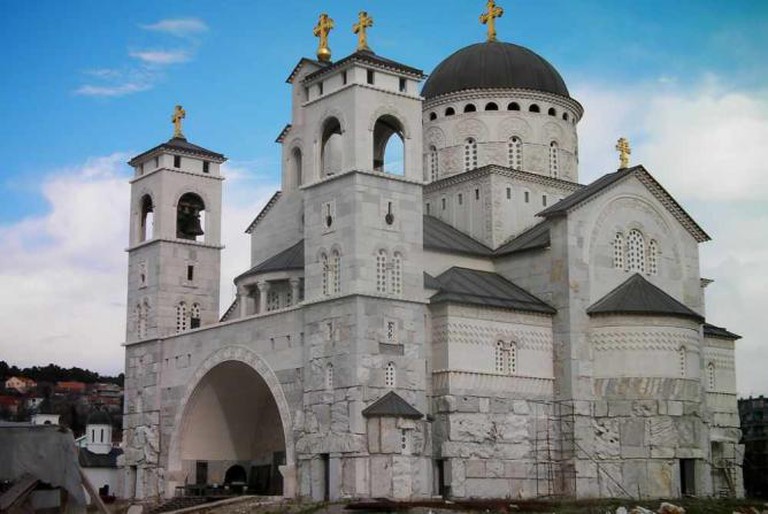 Hram Hristovog Vaskrsenja | © Tm_tm/Flickr
Translating into English as “The Cathedral of the Resurrection of Christ”, this beautiful building was constructed in 1993 and is a piece of modern architecture exuding a distinctly classical feel. Designed by architect Dr. Predrag Ristic, a prominent figure in the Orthodox church, the cathedral’s exterior combines Roman and Byzantine influences to provide an elegant and regal aesthetic. The church still retains its own Montenegrin edge and originality too, as it aims to channel the Medieval spirit of its country’s past. Visitors here can marvel at intricate iconography carved into rugged blocks of stone at the base level of the cathedral, or look up at its soaring twin towers and arched roof overhead. The decoratively ornamented interior is also a wondrous sight to behold, with the gold detailing, meticulous paintwork and grand chandelier making Hram Hristovog Vaskrsenja one of Podgorica’s most awe-inspiring landmarks. 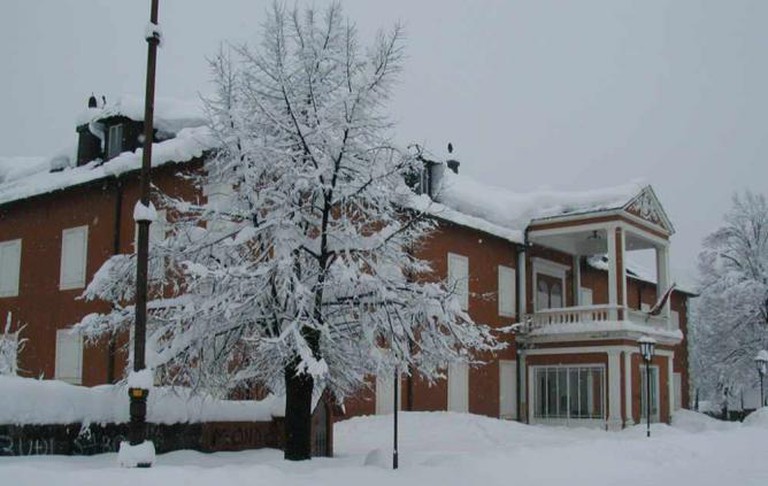 King Nicola’s Palace | © Nictalopen/Flickr
Formerly the summer home of the Petrović-Njegoš family, a clan who ruled Montenegro from the end of the 17th century up until 1918, this grand mansion is a handsome piece of classical architecture set in pretty park grounds, and is a site which makes for an interesting day out in the capital. Now one of two venues for Podgorica’s Centre of Contemporary Art, visitors can explore the palace’s regal exterior before venturing inside to view original works from artists of the former Yugoslavia. A small but rich gallery, visitors can enjoy being in the former home of members of one of Montenegro’s most important dynasties, and soak up the historic atmosphere that the venue invokes.

The Church of St George 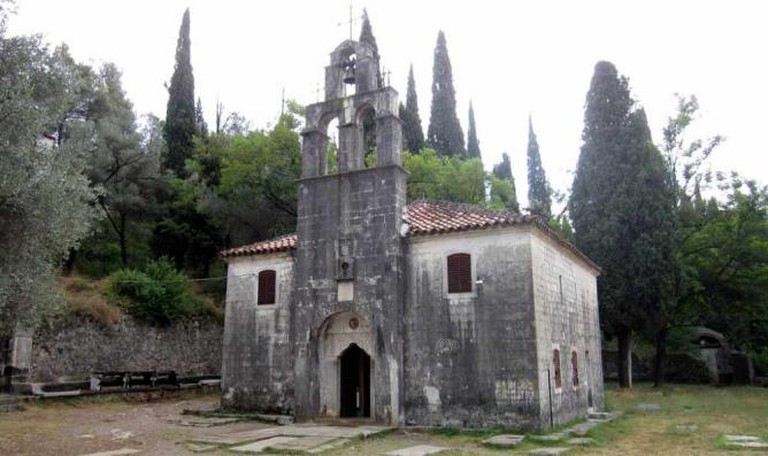 St George’s Church | © Rinses/Flickr
Set at the foot of the Gorica Hill, The Church of St George is the oldest church in Podgorica, having been built somewhere between the 4th and the 6th centuries. Hugged in by a small graveyard where visitors can attempt to decipher the symbols and words carved in to the stone, this small Orthodox church has an elegant aesthetic typical of the Early Christian religious buildings. Step inside to view original guildwork, frescoes and intricate iconography, as well as a number of other relics belonging to the church, and make the most of a visit to this rustic and historically rich monument.

The Church of the Holy Heart of Jesus

Church
Facebook
Email
Twitter
Pinterest
Copy link
Share
A must-see for architecture lovers, The Church of the Holy Heart of Jesus was built in 1969 whilst the League of Communists of Montenegro were in power, and is today the only Roman Catholic church in the city. Designed to replace a previous church which was destroyed during World War II, the building was constructed as a beacon for the brutalist movement, and was a symbol of the rise of communism which swept over Eastern Europe following the war. Designed by professor Zvonimir Vrkljan of the University of Zagreb, the building was built to resemble a proud ship, in order to express a sense of strength and industry. Harsh and ominous to look at, the concrete structure is a prime example of the anti-materialistic building style which dominated the communist time, with its dark and minimalistic interior imitating the external aesthetic. This church, then, provides a fascinating example of the prevalent ideologies of the era.

40 kilometers outside of Podgorica lies one of Montenegro’s most arresting pieces of architecture, the Ostrog Monastery, a Serbian-Orthodox building which is well worth travelling to from the city. Carved entirely into the Ostroška Greda mountainside, the monastery has an almost vertical exterior, a feature which is a miraculous combination of human endeavour and natural providence, and elevates the church as one of the world’s most popular pilgrimage sights. Founded by Bishop Vasilije of Herzegovina in the 17th century, and dedicated to Saint Basil who later died there, the two parts of the monastery were built into caves by local builders and engineers in a building process which demanded years of labour, skill and precision to complete. With breathtaking views over the lush greenery of the surrounding hills and countryside, the monastery is a jaw-dropping site inside and out which boasts a riveting history and past life, including its reconstruction in 1923 after much of its interior was destroyed in a fire. 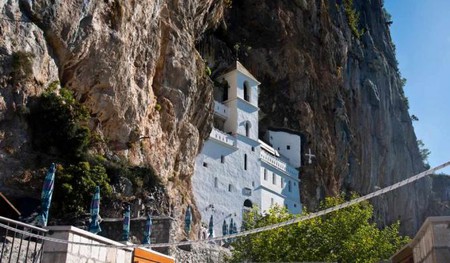 Bridge, Building
Facebook
Email
Twitter
Pinterest
Copy link
Share
A gift from Russia to Montenegro, this monument commemorates the Russian singer and songwriter Vladimir Semyonovich Vysotsky who was a great lover of Montenegro’s natural beauty and unique culture. Soviet architecture enthusiasts will be interested in the significant symbolism of the piece, with Vysotsky having been a prominent artistic figure during the Soviet movement due to his ironic yet politically charged ballads, songs which propelled him to superstardom throughout the communist countries. This highly stylised monument, a mirrored stainless steel structure and stone statue set upon a marble platform, is situated right next to the Millenium bridge and the UN Eco Building, so visitors can enjoy a full day of architectural sight-seeing within minutes of one another.
By Megan O’Hara
Give us feedback