An Introduction to Lithuanian Literature in 8 Books

Lithuanian authors have been publishing books in the Lithuanian language since the 16th century. This rich history of writing came to a halt during the Soviet occupation, as writing in Lithuanian was banned for fear of an uprising. Publishing in the Lithuanian language began again in 1904. Writers, such as Vincas Kreve-Mickevicius and Zemaite paved the way for Lithuania’s contemporary authors. The writers of the eight books included in this list have written books detailing Lithuanian history and culture and many have been translated into English. Even existentialism has made its mark on Lithuanian literature.

Written by Kristijonas Donelaitis in the late 1700s, Metai/The Seasons was the first fiction written by a Lithuanian in the Lithuanian language. The story follows Lithuanians in a rural community throughout an entire year. It is considered a classic Lithuanian work and has been published in at least 12 different languages.

The Herdsman and the Linden Tree, Vincas Kreve-Mickevicius, 1964

Considered for a Nobel Prize in Literature, Vincas Kreve-Mickevicius was a prolific Lithuanian author who was born in 1882 and died in 1954. He wrote several collections of Lithuanian folk songs as well as Lithuanian legends. Although he eventually immigrated to the US, many of his books have not been translated. However, fictional, short story, the Herdsman and the Linden Tree was published in English.

Between Shades of Gray, Ruta Sepetys, 2011

Although not translated to English, Balta Drobule or White Shroud is an important existentialist novel written in Lithuanian by Antanas Skema, a Lithuanian American. This novel, along with many others, was banned during the Soviet times in Lithuania. The book follows the character Antanas Garsva, a fictional poet who gets caught in a love triangle, which subsequently pushes him to insanity. Many consider the White Shroud to be the first modern Lithuanian novel. 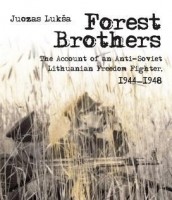 Forest Brothers is an autobiography written by Juozas Luksa about his personal resistance to Soviet occupation in Lithuania. This powerful book provides an in depth understanding about the dangers, tragedies, and struggles faced by Lithuanians during this time. The novel has been translated into the English.

The contemporary Lithuanian author, Kristina Sabaliauskaite, was honored in 2015 as the Woman of the Year in Lithuania. Her novel, Silva Rerum, which was published in 2009 has received numerous awards and was listed among the 10 most important Lithuanian books of the decade. Silva Rerum is a historically accurate novel that follows the life of a noble Lithuanian family from 1659 to 1667. This book is the first in a trilogy and has been translated to Latvian and Polish. Another book written by Sabalaiuskaite,Vilnius Wilno Vilna: Three Short Stories, has been translated into English.

Written by Birute Putrius in 2015, Lost Birds is a fictional novel following the lives of several Lithuanian children who flea Lithuania to Chicago during WWII. The main characters are torn between missing their home country and the attraction the United States holds for them. When Lithuania regains its freedom, the main characters revisit Lithuania.

Jurgis Kuncinas is one of the most popular Lithuanian writers with fictionalized autobiographical stories. Tula is perhaps his most famous novel and those visiting Vilnius may recognize locations in the text, as it is set in Uzupis. At the time of writing this novel, Uzupis was a poor neighborhood known for prostitution and drugs. Tula follows the narrator of the story through treatment for alcoholism, meeting numerous eccentric characters along the way. Several of his books have been translated into other languages including English.