A Guide to Exploring Užupis: The Independent Republic for Artists 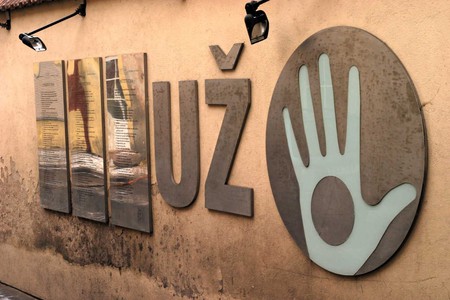 The Constitution of the Republic of Užupis |© Lee Fenner / Flickr

Under the Soviet regime, Užupis used to be one of the most dangerous places in the whole of Lithuania. However, 12 brave artists changed it all with some help from Frank Zappa, and today Užupis is the most bohemian, inspirational, soulful, and colorful part of Vilnius. It would be a real shame to miss it out while visiting Lithuania, so check out this guide and put the independent Republic of Užupis on your bucket list!

Archangel Gabriel – the symbol of Užupis

On April 1, 2002, Romas Vilčiauskas’ sculpture, Archangel Gabriel, was proudly placed in the main square of Užupis Street. Archangel Gabriel, also known as the Angel of Užupis, still stands in the main square, attracting many curious tourists. The Angel of Užupis is blowing a trumpet, sending a message to the world that artistic independence is back in Eastern Europe after many years of oppression. 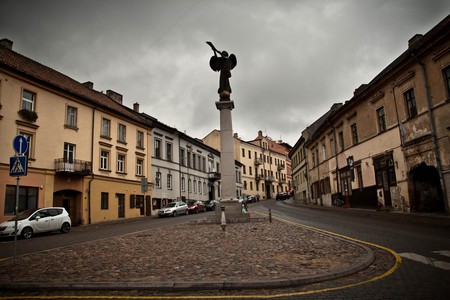 A massive sculpture of an egg

The sculpture of a huge egg once stood in the main square of Užupis Street, but it was replaced with Archangel Gabriel in 2002. Today, you can find this massive egg standing on Pylimo Street. Every year, during Easter, people gather to repaint the egg with new colors. This egg is a perfect example of how funny, and a little strange, Užupis culture is. 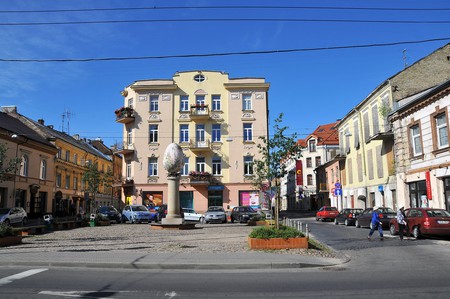 To fully understand the spirit of Užupis, you must first know all the history which surrounds it. During the Soviet regime, Užupis was a dangerous neighborhood, full of drug addicts, prostitutes, and thieves, but with the power of art, it was reborn into a heavenly and peaceful place. Today, you can freely walk around artsy streets and numerous galleries. There is also a museum of blacksmithery in which you can learn a little bit more about old Lithuanian crafts. 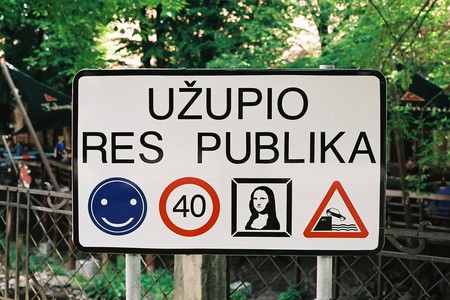 The Constitution of the Republic of Užupis

Technically, Užupis is a part of Vilnius, Lithuania, but local artists once declared the independence of Užupis as an April fool’s joke. Today, it is unclear if those artists were actually joking or they still believe in the independence of Užupis. One thing is for sure, though – you have to read the Constitution of the Republic of Užupis, which was translated into many different languages, and has some bizarre rules like “Everyone has a right to be happy or sad.”

Užupis would not be the same without it’s peaceful, quiet spots, where bohemian artists and other locals go to relax and be with themselves. There is a little park called Tibet Square in Užupis, which is just perfect for a picnic on a sunny summer’s day. A walk around Bernardine Cemetery, one of the oldest cemeteries in Eastern Europe, is especially beautiful on the night of November 1st when thousands of candles light it up. 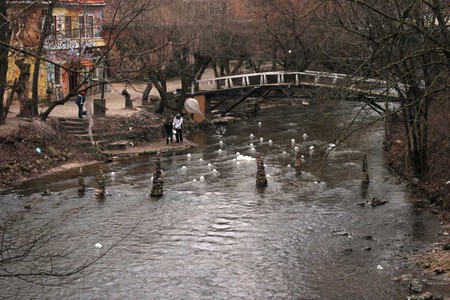 Food is an essential part of Užupis culture, and it would be a shame to miss out traditional Lithuanian dishes while staying in Užupis. There are plenty of different cafes and restaurants to suit everyone’s taste, so visitors always leave Užupis with full stomachs. 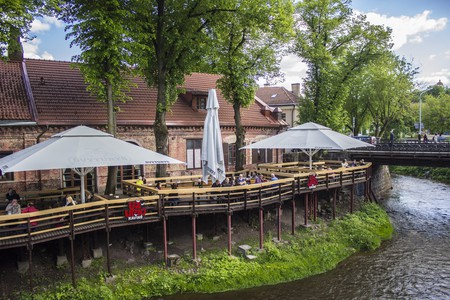 Restaurant in Užupis | © Antonio Campoy / Flickr
Give us feedback