Mr. Thoms, Tunnel del Quadraro | Courtesy of Ilaria Ingravalle
Street art: decadence or urban renewal? Rome has a bias towards the second. Indeed, local institutions have been continuously and successfully encouraging these kinds of initiatives. Although spontaneously discovering street art can be fun, we’ve curated a guide which spans from the historic center to lesser known neighborhoods, revealing some of the best pieces.

Lying in the beating heart of the historic center, Metro Spagna has been recently involved in a joint project between the public transportation company of Rome (ATAC) and 999Contemporary, a non profit curatorial project promoting contemporary urban art. Here, widely known French artists like C215 and Seth worked together for two days to convert this high-trafficked area into something worth visiting, just before the iconic Spanish Steps. 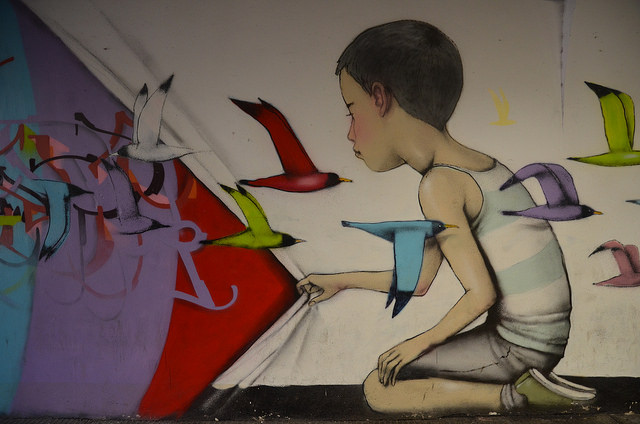 Inhabited by urban development workers in the late 20th century, this area was heavily bombed by the Allies during World War II and has now become a cheap area to hang out. In recent times, private and public revitalization projects have been bringing attention to another aspect: street art. Take a closer look to the walls, where you may spot works signed by Alicé Pasquini, C215 and Borondo. 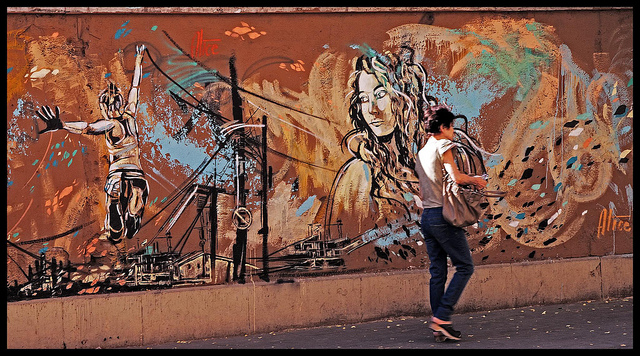 Bridge, Cemetery
Blu's Graffiti | © Emiliano Felicissimo/Flickr
Book Now
A historic southern Roman district edified around the 1910s for industrial purposes, the Ostiense area has recently hosted a redevelopment project named Ostiense District. In between the several industrial archeological findings such as the Gasometer and the Centrale Montemartini, you can admire several street art pieces signed by ROA, Sten&Lex, Lucamaleonte and many others. Be sure to spot those under the railway bridge on Via Ostiense, where poets and politicians buried just few metres away in the Non-Catholic Cemetery for Foreigners are celebrated.
More Info
Open In Google Maps
Rome, Italy

Museum
Welcome to Shanghai | © Luca Nebuloni/Flickr
Just outside an (apparently) ordinary apartment block just behind Via Cristoforo Colombo, you will find a street art piece depicting Welcome to Shanghai,in memory of the original nickname of the area. This is the ultimate goal set by the project named Big City Life:creatively reconverting the area without forgetting its roots. The typical block has been turned into an open air museum where each of its 11 buildings has been adopted by a famous street artist (like Mr Kleva, Jerico, SETH).
More Info
Open In Google Maps
Rome, Italy

During World War II, the Quadraro district was known as the ‘German wasps’ nest’ for being one of the most antifascist areas of Rome. As they said, ‘if you want to escape Germans, either you go to Vatican or to Quadraro’. Since 2010, its townish streets host the Museo di Urban Art di Roma (o MURo), a ‘community-specific’ project which, through a continuous interaction with locals, aims to enhance the ‘spirit of the place’. Enjoy a stroll amongst these beauties while eating some local delicacies grabbed from one of the last original groceries of the area.

A long row of pines planted in a villa in the area (Villa Serventi) gave the name to Pigneto, a hip area on the rise just close to the Prenestino district. Along with the bordering Torpignattara, these areas have been recently involved in a redevelopment project named Light Up Torpigna. Hang around towards Bar Necci, the historic location of Pier Paolo Pasolini’s first movie Accattone, and don’t forget to lift your head just in case you spot a street art piece depicting the Italian intellectual on the higher walls. 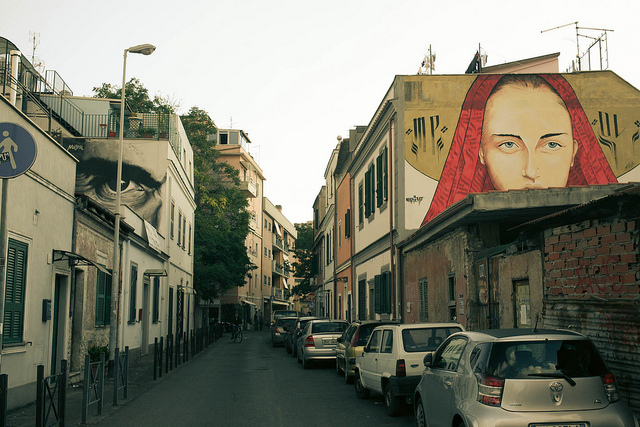 Well known for its bad reputation, San Basilio district has been a natural choice for hosting a creative redevelopment projects through street art. We are talking about SANBA: a remarkable project founded in 2015 by the cultural association WALLS, which collaborated with internationally renowned street artists to pread this powerful message: always fight together in a creative way for beauty and culture, even in the least fancy city corners. 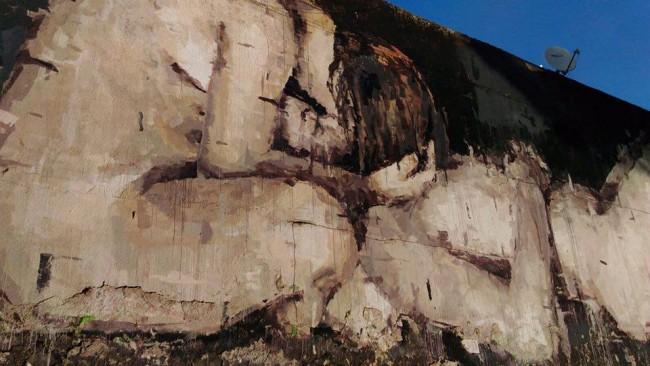 Museum
Away on the Prenestino area, an ex-residential area which now has been gentrified, lies a place hard to describe. Born after the sale of an old cured pork meat factory in 2009, the MAAM is now a space which expresses all its multicultural vitality through its walls and its astonishing street art. It can be visited each Saturday.
More Info
Open In Google Maps
913 Via Prenestina, Roma, Lazio, 155, Italy
Visit website

This Roman suburb has recently hosted a festival dedicated to street poetry, which made it a byword in culture all around the city. During this cultural event, besides the public lectures held by local poets, many famous street artists such as Diamond, Sugar Kane and Mr. Klevra, signed insanely colorful murals all over the area.