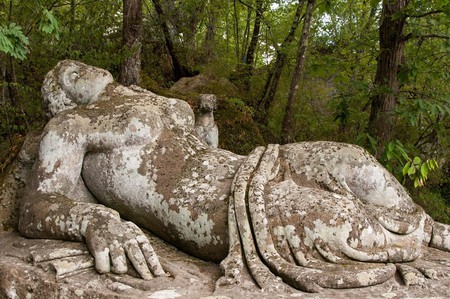 If you’re craving some off-the-grid excitement in the Italian countryside, or you need a break from city hopping, the Parco dei Mostri in the Garden of Bomarzo is a great way to spend the day. Embedded in a world of mossy antiquity, this park is filled with bizarre and mesmerising statues and carvings.

Also called Sacro Bosco (Sacred Grove), this eerie nature reserve is hidden away in the Province of Viterbo, north of Rome. The grotesque display of fascinating stone figures dates back to 1552 when Prince Pier Francesco Orsini commissioned architect Pirro Ligorio to create a park that would express his grief after having just survived a war, lost his wife and experienced a litany of other misfortunes. Meant to bring this realm of fantasy and shock to life and reflect his anguish, Sacro Bosco features a number of unconventional models, including a giant fish head, a stairwell through the mouth of a screaming monkey, a war elephant and two brawling giants. 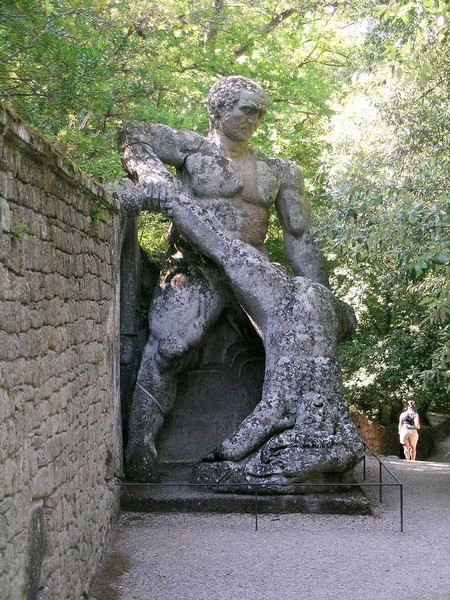 Ligorio was a noted architect at the time, known for his work at the Cathedral of Saint Peter in Rome. Once commissioned, he designed the layout of the park in a surreal and curious manner that rejected traditional Renaissance style and instead adhered to the abnormal tone of the place. Dotted with a blend of mythological, religious and animal sculptures, the canopied walkways still intrigue and fascinate. After the ‘Villa of Marvels‘ was completed, it sat for many years without very much upkeep until it was acquired by a new owner who returned it to a pristine state. 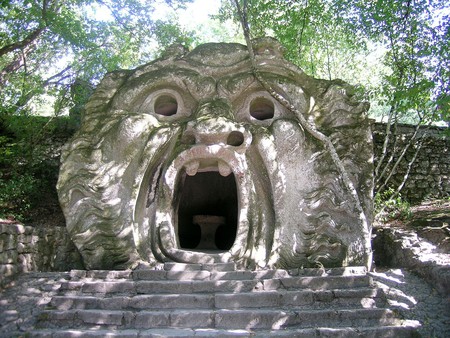 Entry to the chilling oasis only costs 10 euros. Visitors can wander around and discover the broad assortment of oddities the park has acquired, marvel at the wide-eyed dragon statuette, the languid nymph figure and the massive turtle and make their way through the mysterious playground. Amble through the greenery, relax beneath the shade of the oak and chestnut trees and inspect the magnificent carvings. Although the park is slightly out of the way, it is well worth it to discover this peculiar wooden alcove. The one-of-a-kind locale is not only a beautiful slice of Italy’s nature, but it is also a phantasmagoric display of 16th-century art.

Bomarzo Italy | © Bo&Ko/Flickr
Give us feedback