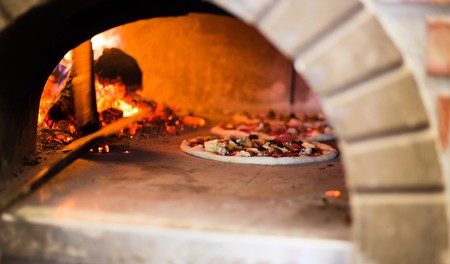 Italians have long been the biggest champions of their field-to-fork food culture. Now, the nation can once again celebrate its gastronomic genius as one of the cornerstones of Italian cuisine, the Neapolitan art of pizza making, has been recognised as an ‘intangible cultural heritage’ by UNESCO.

The art of the pizzaiuolo, or pizza-maker, was awarded the coveted world heritage status following a meeting of the UN’s cultural body on the island of Jeju in South Korea. Over two million people supported the bid from the city of Naples – the birthplace of pizza – to officially recognise the unique cultural and gastronomic traditions handed down for generations in the southern Italian city. 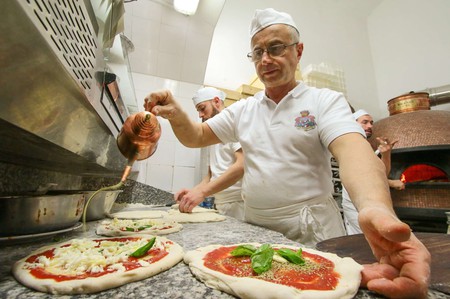 UNESCO have said that the Neapolitan art of pizza making is an intangible cultural heritage. | © Carlo Hermann/Kontrolab/SIPA/REX/Shutterstock

In Naples, pizza-makers – known as pizzaiuoli in Neapolitan vernacular and pizzaioli in Italian – have perfected a four-step culinary practice that produces the life-changing pizza the city is so well known for.

In the first stage, known as staglio a mano, the pizzaiuoli separate the dough into balls by hand. The second phase involves shaping the dough; firstly by spreading it in a process called ammaccatura, then by forming the crust, or cornicione, and finally by slapping the pizza onto a floured surface – a process known as lo schiaffo. Master pizzaiuoli will then finish this second stage with il volo – an acrobatic spin of the dough through the air that not just looks impressive but also oxygenates it resulting in a lighter texture.

The third phase consists of topping the dough with ingredients from the centre outwards with a spiraling and clockwise motion. The fourth and final stage is to bake the pizza in a wood-fired oven, with a rotating half-turn part way through cooking. 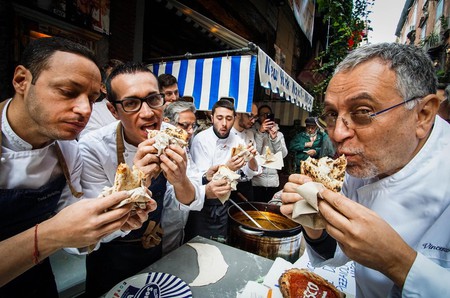 It’s not just the process of pizza-making that adheres to strict rules, but the ingredients too. The Associazione Verace Pizza Napoletana (the True Neapolitan Pizza Association) states that a real Neapolitan pizza must be made with only certain varieties of tomatoes, such as San Marzano or Corbarino, and pre-approved cheese – usually mozzarella di bufala campana (made with buffalo milk from the Campania region), but sometimes fior di latte.

Only two types of pizza – Marinara and Margherita – can claim to be truly Neapolitan. Pizza Marinara, made with tomato, oregano and garlic, was traditionally prepared by la marinara, the fisherman’s wife, when her husband returned from sailing in the Bay of Naples. 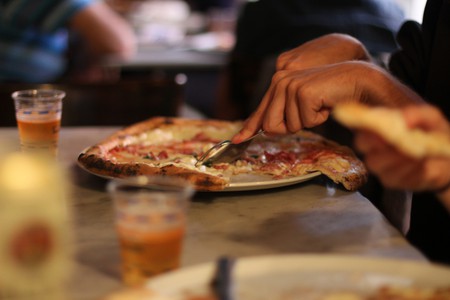 Pizza Margherita is generally considered to be the creation of Raffaele Esposito of Pizzeria di Pietro. It is said that Esposito baked three pizzas for King Umberto I and Queen Marghetita of Savoy during their 1889 trip to Naples. Happily, the Queen’s favourite was the pizza recalling the colours of the Italian flag with red tomatoes, white mozzarella and green basil.