This Hilarious Tumblr Is Dedicated to Ugly Babies in Famous Paintings 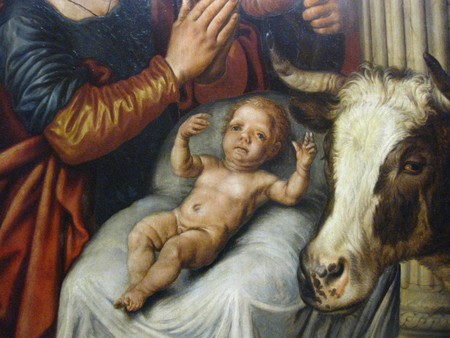 Yes, there is an actual Tumblr page dedicated to ugly Renaissance babies and its the best thing you’ll see all day.

Ugly Renaissance Babies is skimming art history so we don’t have to, providing the internet with constant amusement in the form of creepy looking infants in renowned Renaissance paintings.

The weirdness of the kids depicted almost makes you question whether some of the artists had ever seen a baby at all! There is a baby Jesus that has so many neck wrinkles, you will question if he isn’t Benjamin Button come a few centuries early.

Another gem is what appears to be a baby being delivered via caesarean, coming out of a perfectly spherical hole in the mother’s belly and sporting thigh muscles so cut they are unlikely to be found on any modern man.

Actually, muscles are a common theme on the page, which also features rock hard abs on a newborn because clearly, as we’ve always suspected, six-packs are something you are blessed with at birth.

Then there are the classic contortionist babies that blow the mind with their impossible body positions.

This page is awesome because it takes quite serious paintings from the art historical canon and puts their fun side on display. We can’t get enough.