This Cat Sanctuary in Old Roman Ruins Is a Must-Visit

A walk through the historic centre of Rome will no doubt take you passed Largo di Torre Argentina, a large, excavated square located just a couple of blocks from the Pantheon. A closer look with reveal not only a fascinating collection of ancient temples, but a cat colony lurking amongst the ruins.

The ancients ruins of Largo Argentina were first discovered in 1927 when, after the Italian unification, Mussolini began to reconstruct and rebuild vast sections of the city. At the time known as Torre Argentina, the square was named after the Latin word for Strasbourg, Argentoratum, due to the historic residence of Papal Master of Ceremonies Johannes Burckardt who hailed from Strasbourg and built a palace here in 1503. During the demolition of the area, workers came across the remains of a colossal ancient marble statue and subsequent excavation led to the discovery of four Republican-era pagan temples, dating back to between the 4th and 2nd centuries BC, as well as a section of the Theatre of Pompey, the site of the assassination of Julius Caesar in 44 BC. Indeed, there is an annual re-enactment of the murder of Caesar at the exact spot every year on the Ides of March (15th March) to honour the anniversary of his death. 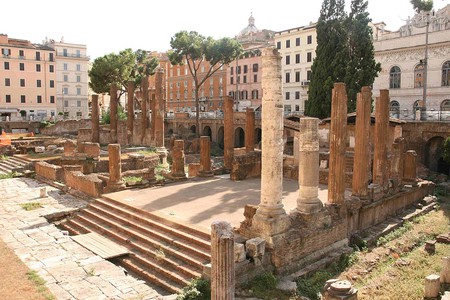 Once the area was completely cleared at the end of the 1920s, it gradually became home to some of Rome’s vast population of feral cats who historically sought shelter among the city’s ancient ruins and crumbling remains. For many decades the stray cats of Rome, including the ones at Torre Argentina, were cared for by ‘gattare’ (cat ladies) who would feed and care for them on an irregular basis. In 1994, volunteers took over and began spaying or neutering as many cats as possible to control the population, setting up the Torre Argentina Cat Sanctuary. 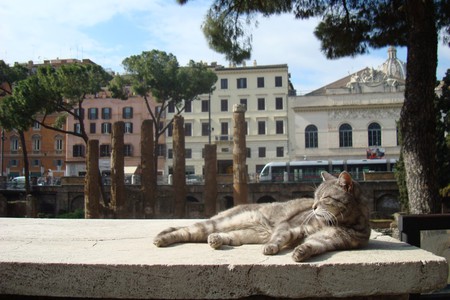 Nowadays, there are an estimated 150 cats residing at Torre Argentina and the dedicated volunteers also feed, provide care for and vaccinate the cat population all across the city with the main base still found among the ruins. The sanctuary is open to visitors daily from noon until 6pm when cat-lovers can meet the furry residents and browse the souvenirs at own Cat Shop. The sanctuary also arranges adoptions, either by finding the animals loving homes or setting up distance adoptions to build a steady supply of much-needed donations.

Despite the controversial move by archaeological authorities in recent years to call for the closure of the cat sanctuary, citing the effect the large animal population has on the dignity and conservation of the ancient holy sites, petitions in favour of the sanctuary gained over 30,000 signatures, providing enough awareness to save the sanctuary. However, although a compromise appears to have now been reached, the sanctuary still lives with the threat of eviction and depends more than ever on the support and donations of its visitors to ensure the historic cats of Rome can keep their home. 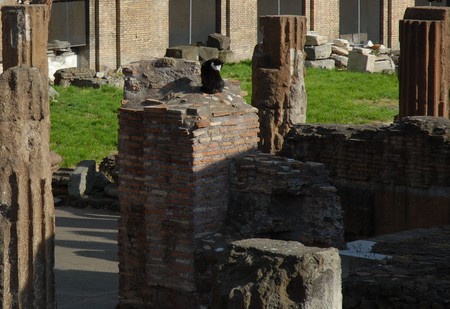