Top Things To Do and See in Rimini, Italy

The town of Rimini has largely been defined by three historical individuals from three separate eras. It first flourished as a Roman stronghold under the Emperor Augustus; it was ruled by Sigismondo Malatesta, a powerful lord who fought multiple times for the city’s independence in the middle ages; and it was finally immortalized in the films of Federico Fellini in the 20th century. Today, this gorgeous coastal city has not lost sight of its glorious past, and yet manages to stay in the present as a first-choice destination for holidaymakers on the Adriatic coast. 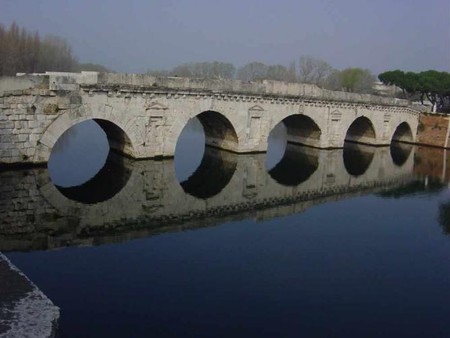 The memory of the legendary Italian filmmaker, Federico Fellini, permeates his home town. The man himself is remembered by name in the Piazzale Fellini and the Parco Federico Fellini opposite the Grand Hotel, whilst his characters occupy the walls of houses in the old town in the form of murals drawn during the Festa del Borgo in 1994. Rimini was where Fellini spent his childhood years, which he fondly remembers in Amarcord, a film paying homage to the city’s open spaces and landscapes.

Both Piazza Tre Martiri and Piazza Cavour can lay claim to being the main town squares of Rimini. The former was the forum during Roman times, and according to popular tradition it was here that Julius Caesar uttered the famous words “alea jacta est” to his soldiers after the crossing of the Rubicon. The latter gained importance during the middle ages with the construction of several notable buildings and monuments, and nowadays it is a favorite gathering place for locals and the location preferred for national festivities. Both of these are not to be missed.

The House of Malatesta

Despite his notoriety as a self-indulgent tyrant, Sigismondo Malatesta, the early 15th century ruler of Rimini, can be credited for two of the city’s most enduring buildings. Castel Sismondo served as a defensive structure to protect the city from neighboring enemy rulers, but was also built in a way which suggested the princely wealth of the Malatesta family. The Tempio Malatestiano, as the church dedicated to San Francesco is known today, was an innovative piece of ecclesiastical architecture, as it was one of the first religious buildings in Italy to incorporate the classical style.

The Borgo San Giuliano started out as the poorest area of the city, where the marginalized population of society resided. A strong sense of community and solidarity among its residents led to the inauguration of the Festa del Borgo in 1979: Rimini’s biannual celebration of local culture which gave new life to the Borgo’s cobbled streets. Light shows, fireworks displays and street theaters are all part of the two-day program in September, with a different theme chosen each year. 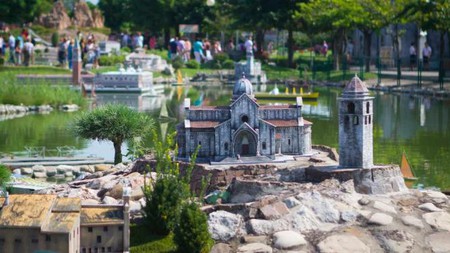 The half-million visitors that this curious little theme park receives each year come to admire the work of Ivo Rambaldi, who converted his dream of reproducing Italy’s architectural marvels in miniature into reality in 1970. Composed of 85,000 square meters of weather-resistant synthetic material, its 270 historical buildings and monuments, reproduced to scale, provide a fun and educational experience by allowing visitors to discover the country’s rich cultural heritage close up. 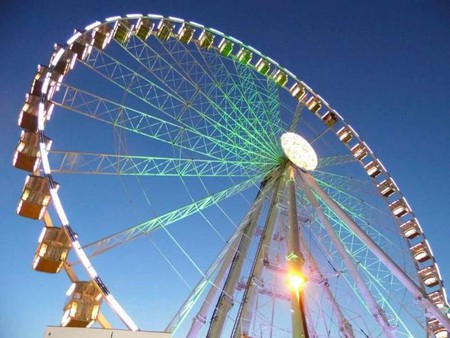 The ferris wheel is one of Rimini’s most recent touristic additions. It was built in time to celebrate the new millennium in Paris, from where it traveled to Lyon, Bonn, Berlin and Hong Kong before finally arriving in Piazza Boscovich right by the water. “Eye Love Rimini“, as it has been named, graces the city’s skyline throughout the year, rising to a height of 55 meters from where the entire length of the Riviera can be seen on a clear day.

You only need to look to the Ponte di Tiberio and the Arco d’Augusto to behold the magnificent work of the Romans in Ariminum, as Rimini was called in those days. Both the bridge and the arch were made using the same white Istrian stone characteristic of the Adriatic region, and were commissioned under the Emperor Augustus (though the bridge was dedicated to his successor Tiberius). Today they stand as proud symbols of Rimini’s past as an ancient Roman city.

Rimini’s only five-star hotel has become somewhat of a landmark in its own right. Opened in 1908, the Grand Hotel Rimini had to be reconstructed on two separate occasions due to a fire and the bombings of World War II. Declared a national monument in 1994, its history is closely linked with Fellini: the hotel had been a source of admiration for the Italian director when growing up, with its original 18th century French and Venetian furnishings, and he had a favorite suite in which he would stay on his regular visits back to his home town.

Rimini’s history as a beach resort dates back to 1843, when the first seaside property in the whole of Italy was built on the waterfront of Marina Centro, the central beach. It developed a reputation among the aristocracy and bourgeoisie, who would come here to bathe and mingle with their wealthy peers. More than 170 years on, the area has expanded to welcome holidaymakers from Italy and beyond, retaining its status as the most popular summer holiday destination on the Romagna Riviera.

Of all the possible places, it was the Pescheria Vecchia, the old fish market, which became the spot to be for an evening out in Rimini. The area around it is dotted with bars and restaurants where youngsters gather for a drink and an Italian aperitivo standing under colonnades or in a romantic side street. And since the University of Bologna opened a campus in Rimini the nightlife is now more lively than ever, with upwards of 6,000 students living in the city during the academic year.