Top 10 Things To Do And See In Bergamo, Italy 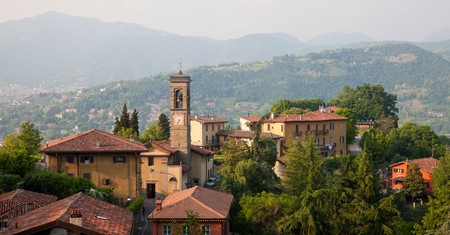 Bergamo is a small town in Lombardy, Italy, with a population of 120,000 citizens. It is located between Milan and Lake Como. Its history is as rich as can be, and clearly marked by the town’s architecture and three height layers. Bergamo’s cityscape is divided into two centers, the upper, older città alta, and the lower, modern città bassa. If you find yourself in the north of Italy, a short stop in Bergamo is a must.

Take a walk alongside the Venetian Walls

The Venetian Walls were built in the 16th century by the Republic of Venice, when Bergamo belonged to that state. They mark the old town, also called the upper historic center, the città alta. The walls were built in order to protect the city from the Republic of Milan and France during the decline of Venice’s control over maritime trade. Nowadays, the walls are a symbol of Bergamo’s rich and proud history, and enclose a fairy-tale-like town devoid of any marks of modernity. You can walk alongside the wals, through the parks that constitute a large part of Bergamo’s città alta. 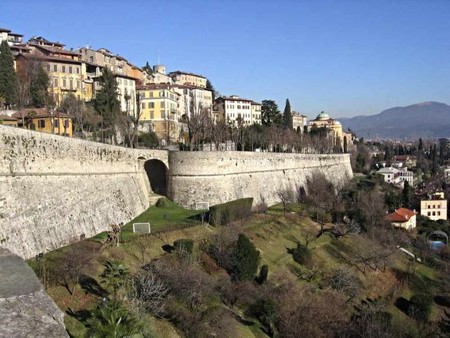 The Venetian Walls of Bergamo | © Ago76/WikiCommons

Explore every corner of Piazza Vecchia 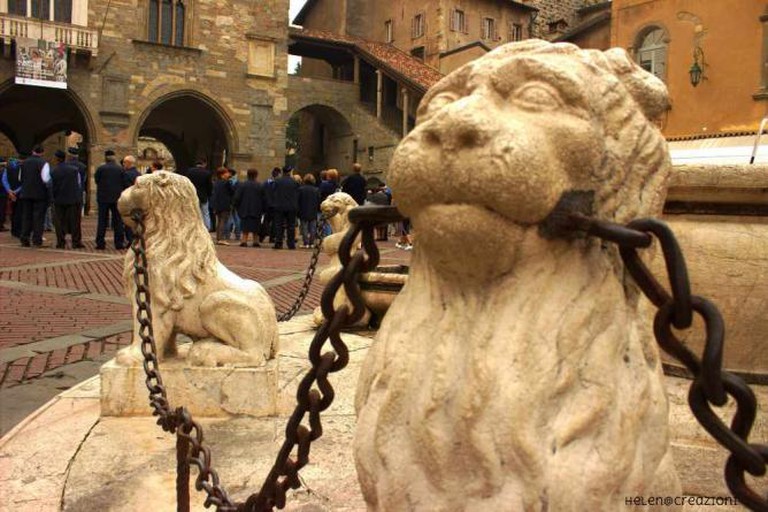 Piazza Vecchia | © HelenCreazioni/Flickr
Piazza Vecchia is upper Bergamo’s vibrant center. Full of building and monuments of great importance, as well as great cafés and gelaterias, it can consume your whole day. It is worth examining the façade of the 12th century Palazzo dell Ragione, whose arches are decorated with unique animal busts, or the central fountain with four magnificent lion sculptures. Once on Piazza Vecchia, you should also have an ice-cream at Caffé del Tasso, considered the best gelateria in the town by the locals.
Open In Google Maps
12 Piazza Vecchia, Bergamo, Lombardia, 24129, Italy
Give us feedback 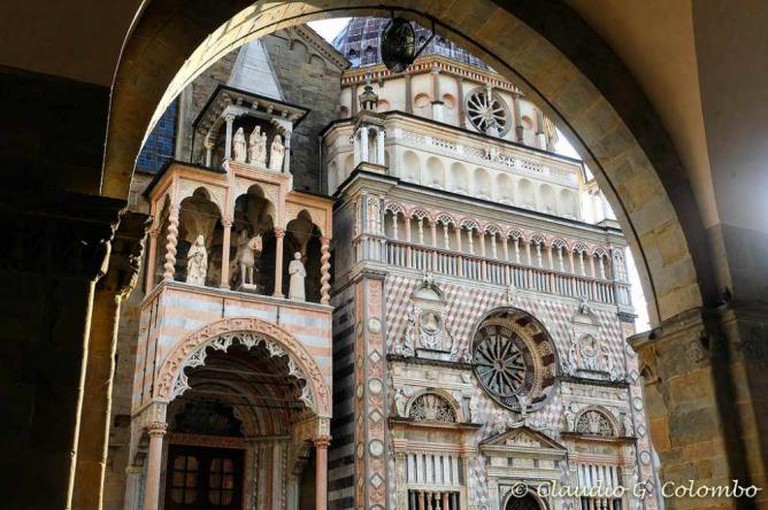 The façade of Cappella Colleoni | © Claudio Colombo/Flickr
The church and mausoleum Cappella Colleoni is the masterpiece of Giovanni Antonio Amadeo, a local artist from Pavia. It is located just next to Piazza Vecchia and to Bergamo’s cathedral. However, Cappella Colleoni stands out from the multitude of wonderful buildings thanks to its colorful marble façade and curious design. Its façade features Biblical scenes and mythological stories alike, and is architectural style is a combination of Renaissance, Mannerism, and later Baroque. Inside, you will find a large number of valuable Italian frescoes and sculptures, as well as the Colleoni family’s sarcophagus.
Open In Google Maps
5 Piazza Duomo, Bergamo, Lombardia, 24129, Italy
+39035210061
Visit Website
Give us feedback 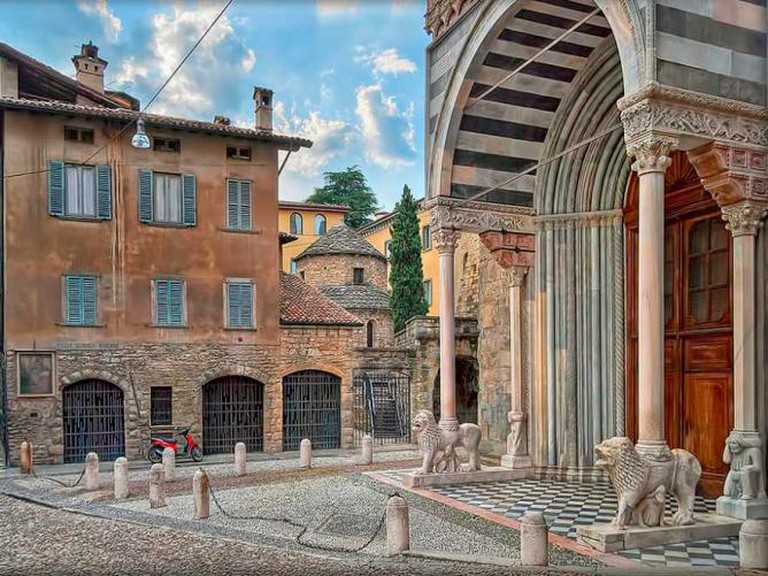 The entrance to the Basilica di Santa Maria Maggiore | © Giuseppe/Flickr
Near Cappella Colleoni and the cathedral you will see the Basilica of Santa Maria Maggiore. Its complicated history dates back to the ancient Romans, when the site was a temple. It was then turned into a Christian church, and in the 12th century became a basilica. From outside the building looks similar to the way it did in medieval times (Romanesque architecture), with the exception of the entrance and the transepts,which have clearly been added later on. The transepts’ columns stand on marvelous, marble lions.
Open In Google Maps
Piazza Duomo, Bergamo, Lombardia, 24129, Italy
Visit Website
Give us feedback 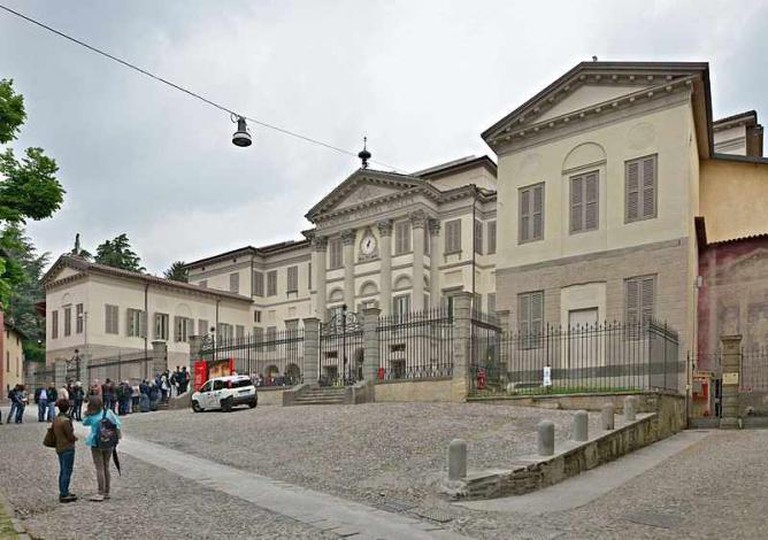 Accademia Carrara | © Wolfgang Moroder/Flickr
This art academy is one of the oldest in the whole of Italy. It is also an excellent art gallery, well organised and recently restructured, that hosts a valuable collection of about 1,800 paintings from the 15th to the 19th centuries by fine national artists such as Raphael, Bellini, Botticelli, Canaletto, and Pisanello. In the 1990s a modern and contemporary art gallery ‘GAMeC’ was added to the complex, enlarging the range of the artwork.
Open In Google Maps
82 Piazza Giacomo Carrara, Bergamo, Lombardia, 24121, Italy
+390354122097
Visit Website
Give us feedback 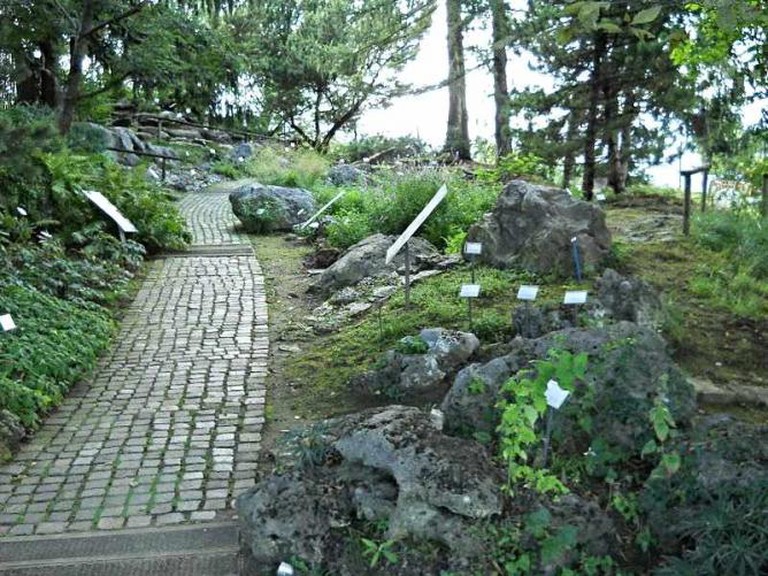 Orto Botanico in Bergamo | © Cruccone/WikiCommons
Bergamo’s beautiful botanical garden is a part of the Museum of Natural Sciences. This nature space used to have only alpine flora, but now has broadened its collection to the local flora of Lombardy, as well as some foreign and exotic species. It is the finest green space in the town, famous for its charming wildlife landscapes and mountains.
Open In Google Maps
Scaletta Colle Aperto, Bergamo, Lombardia, 24129, Italy
+39035286060
Visit Website
Give us feedback

Bergamo is one of these rare towns where you can walk on an ancient Roman road, or even two – namely the traditional, main streets called cardo and decumano, the first leading north-south, the latter east-west. These two streets were a stable and fundamental component of every Roman city, and can be nowadays admired in many cities in Italy, Croatia, Bulgaria, Syria, Jordan, or Israel. These oldest elements of today’s Bergamo intersect where the 52-meter tall medieval Gombito Tower stands. 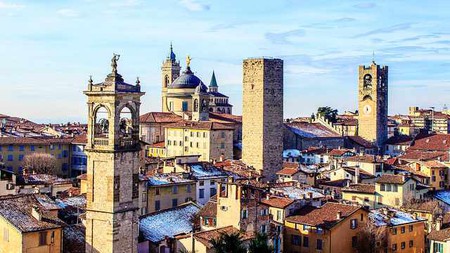 Go shopping on Via XX Settembre

If you like shopping and a more modern surrounding, no worries, you do not have to leave Bergamo. The town’s so-called lower city, città bassa, will provide you with a variety of vibrant cafés, boutiques, and shops. Via XX Settembre, named to celebrate the creation of the modern Italy in 1870, is the most enchanting and busy street in the modern part of Bergamo. If you find yourself on it, it is worth walking into Feltrinelli, a big international bookshop where you can find anything from contemporary Italian novels to world classics to guidebooks. 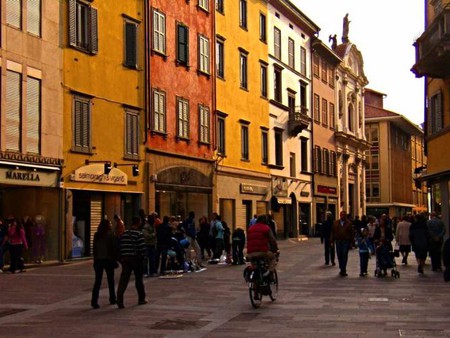 This wonderful panorama spot will provide you with the best view of the whole Bergamo and beyond: several mountain ranges and the nearby towns. To get there you will have to have the tiny ‘sky’ train called funicolare one level beyond the rest of the upper city. Once you find yourself at the top level of Bergamo, it will take you only around three minutes to reach the San Vigilio panorama spot. Watch out for the map on the panorama, so that you can understand what – and how much – you are seeing. 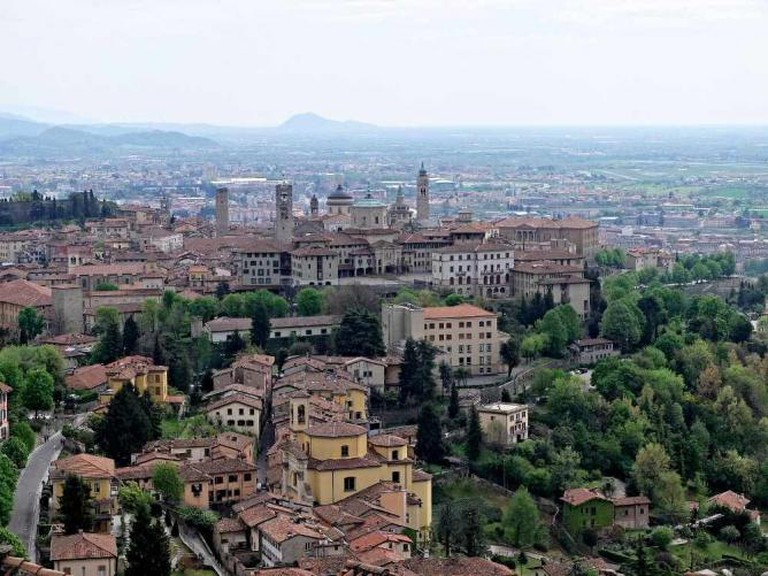 View from La Rocca di San Vigilio | © Mike Wegner/Flickr
The Rocca fortress is located next to the flowery Park of the Remembrances, from where you can admire the lower parts of the town and the hillside. The fortification probably dates back to Roman times, but its construction was interrupted many times due to war. The building played an important role in the unification of Italy.
Open In Google Maps
16 Piazzale Brigata Legnano, Bergamo, Lombardia, 24129, Italy
+39035247116
Visit Website
Give us feedback
Give us feedback