10 Artworks By Raphael You Should Know

Born in the cultural center of Urbino in 1483, Raphael was exposed to the basic techniques of painting through his father Giovanni Santi, a painter for the Duke of the city. Following an apprenticeship under the master painter Perugino and a move to Florence, Raphael would go on to become one of the greatest artists of his time. Here we take a look at some of the most intriguing works by this High Renaissance master. 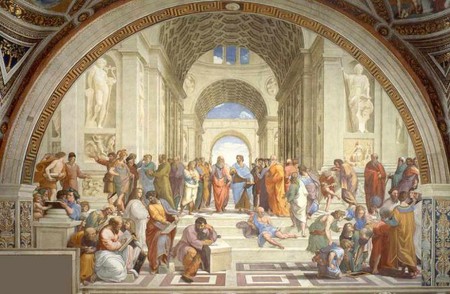 ‘The School of Athens’

A celebration of philosophy and classical thought, ‘The School of Athens’ is a fresco that was part of Raphael’s commission to decorate the rooms of the Apostolic Palace in the Vatican. The History of Art describes the fresco as “Raphael’s masterpiece and the perfect embodiment of the classical spirit of the High Renaissance”. Nearly every great Greek philosopher is present in the work, including the two main subjects located at the fresco’s central vanishing point – Plato and his student, Aristotle. Some of the ancient philosophers resemble Raphael’s contemporaries: Leonardo da Vinci as Plato, and Michelangelo, leaning on a block of marble, as Heraclitus. 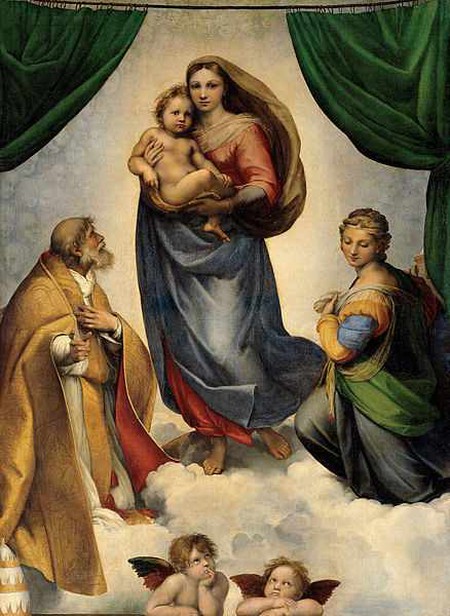 The ‘Sistine Madonna’ is an oil painting that was commissioned in 1512 by Pope Julius II for the church of San Sisto in Piacenza. Today, it can be found in the Staatliche Kunstsammlungen in Dresden, Germany. The painting is best known for the two winged angels at the very bottom of the composition. For the first time in 1803, the pair were copied separate from the rest of the work, eventually giving birth to the marketing campaigns that featured them. Their likeness has been used on everything from stamps and postcards to decorative bed sheets and wrapping paper. 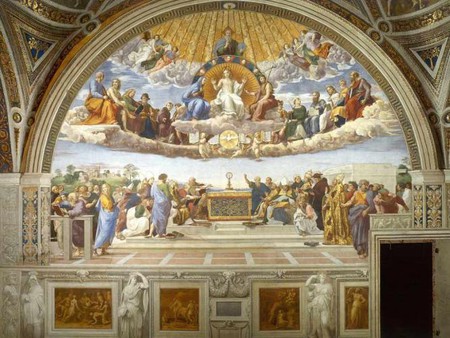 ‘Disputation of the Holy Sacrament’

Another fresco in the Apostolic Palace in the Vatican, the ‘Disputation of the Holy Sacrament’ was the first part of Raphael’s commission. The scene incorporates both heaven and earth. The upper part includes the figure of Christ surrounded by the Virgin Mary, John the Baptist and biblical figures such as Moses and Adam. God sits above Jesus, while the Holy Spirit is at Christ’s feet. In the lower portion of the fresco, there are saints, bishops, popes, priests and the worshipping masses. Look closely and you’ll see Dante Alighieri on the right, wearing a laurel crown that symbolizes his poetic greatness. 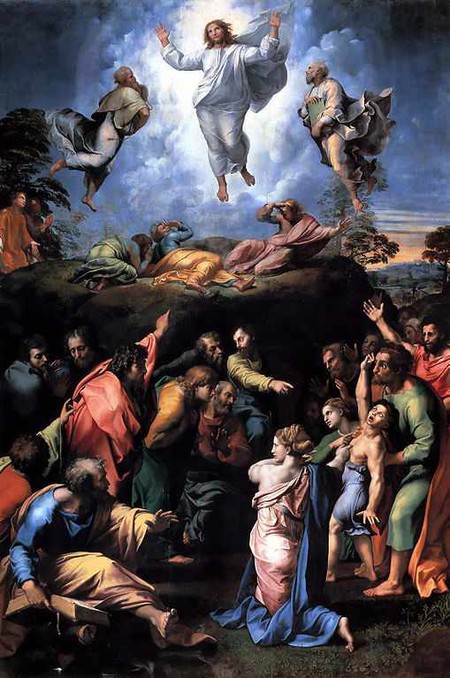 Commissioned by Cardinal and future Pope Giulio de’ Medici, ‘The Transfiguration’ was Raphael’s final work of art before his death in 1520. The painting reveals his growth as an artist and is the culmination of his artistic career. The figures at the bottom of the picture are highly stylized and have contorted poses, a feature of the Mannerist style of painting that arose from the later years of the Italian High Renaissance. ‘The Transfiguration’ is also considered to be a precursor to Baroque painting because of the dramatic tension of the figures as well as the strong use of chiaroscuro. 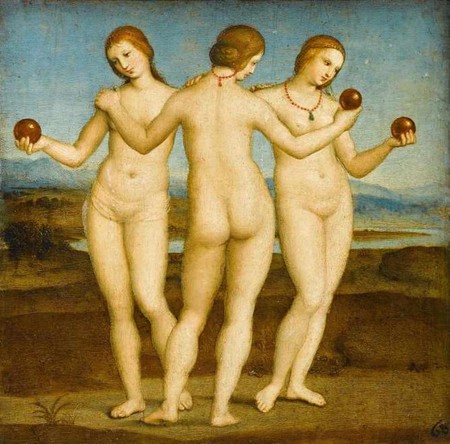 In one of his earliest works, Raphael painted three of the Graces from classical mythology. Raphael’s treatment of the figures is consistent with their typical representation in antiquity – the two outer figures face the audience, while the one in the middle faces away. Though he is careful to realistically depict the anatomy of the three women, the young Raphael’s brush strokes are not as refined when compared to his later works. In fact, ‘The Three Graces’ is believed to be his first study of the female nude from both the front and the back. The misty background is similar to that of the ‘Mona Lisa’, painted by Leonardo Da Vinci around the same time. 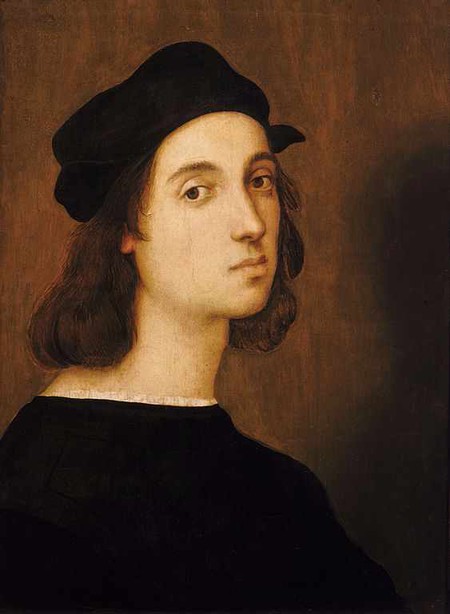 Currently housed in the Uffizi Gallery in Florence, this work is believed to be a self portrait that Raphael completed between 1504 and 1506, though its authenticity has been questioned at times. This is due mainly to the painting’s poor state of conservation, which has prevented art historians from definitively attributing it to Raphael. In addition, an almost identical portrait emerged from a bank vault in more modern times, calling the Uffizi version into question. Still, this has come to be perhaps the clearest and most recognizable image of the artist – it used to grace the 500,000 lire bank note in Italy back in the day. 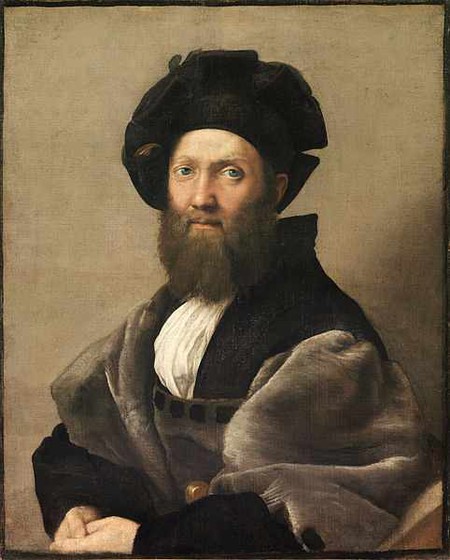 Raphael’s portrait of his good friend, Baldassare Castiglione, is considered one of the greatest portraits of the Renaissance. Castiglione was a diplomat, humanist, and author of The Courtier; he is widely considered a quintessential example of the High Renaissance gentleman. The two met in Urbino, the town where Raphael was born. They became close friends by 1504, as the talented artist had gained significant recognition in the ducal court. Raphael depicts his friend wearing an elegant yet sober costume, appropriate for the accomplished gentleman. Castiglione himself made mention of the portrait’s life-like quality and the feeling of human presence that it emits. 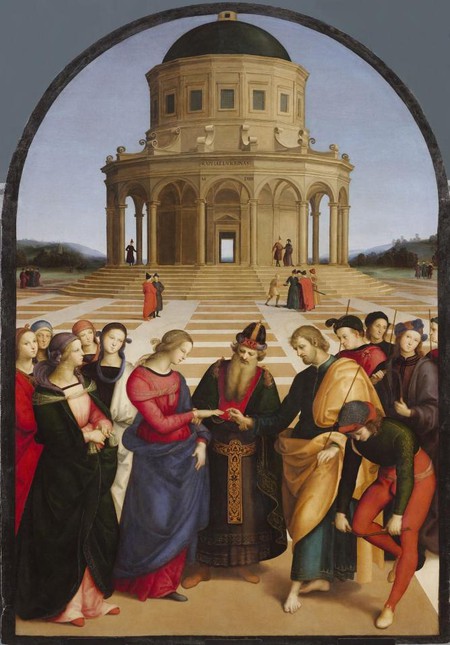 The Engagement of Virgin Mary | © WikiCommons

‘The Engagement of Virgin Mary’

This oil painting of 1504 shows the marriage between Mary and Joseph. It is believed that a painting of the same theme by Pietro Perugino served as inspiration for Raphael as he worked on his own version. As 16th century Italian artist and historian Giorgio Vasari stated, Raphael’s style “surpasses the manner of Pietro”, thanks to the skill with which he captured perspective in this work. The colors are vibrant and the faces of the figures in the foreground are detailed and marked by a calm presence that’s truly lifelike. 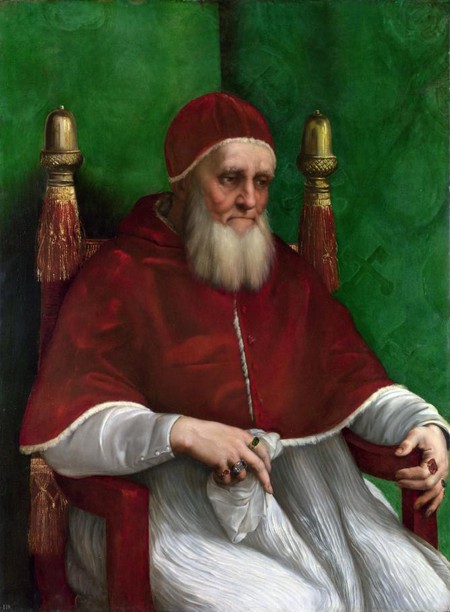 Upon its completion in 1512, this rendering of Pope Julius II was unlike any previous Papal portrait. Usually, Popes were painted frontally or kneeling in profile. Also exceptional was the facial expression, showing the subject lost in thought. With this portrait, Raphael ushered in a new model for Papal portraits that lasted for about 200 years. Giorgio Vasari described the work as “so true and lifelike, that the portrait caused all who saw it to tremble as if it had been the living man himself”.

‘The Triumph of Galatea’

Completed in 1514, ‘The Triumph of Galatea’ is a fresco that Raphael painted for the Villa Farnesina in Rome. The Greek mythological story involves the beautiful Nereid Galatea, who fell in love with a peasant shepherd. In this particular scene, Raphael shows Galatea surrounded by centaurs and sea creatures, including a Triton (half-man, half-fish) who abducts a sea nymph. Raphael’s representation of Galatea is an image based on his ideal of female perfection.