The Style Guide to Dolce and Gabbana

Despite dressing countless stars, Domenico Dolce and Stefano Gabbana continue to champion real women, drawing inspiration from the ‘woman that knows how to scream, laugh, and show her feelings‘. The couple, previously romantic but presently professional, have brought Sicilian glamour into the contemporary consciousness, to ongoing critical (and financial) acclaim. The Culture Trip brings you all you need to know about the Italian fashion powerhouse.

How do you identify a Dolce and Gabbana design?

Elaborate prints, heavy embroidery, black lace and flowers are all recurring themes in Dolce and Gabbana’s collections – and often, all at once. Their flair for Italian excess has many sources, ranging from the dramatic characters of characters of La Dolce Vita to the pomp of the Catholic Church, with Dolce and Gabbana using prints of Sicily’s Cathedral of Monreale and glittering rosaries in their FW13 Collection. Whether it’s a leather mini (mini) skirt over leopard print tights or a Sicilian lemon co-ord, the duo celebrates their heritage in a characteristically Italian fashion – loud and proud. They are also responsible for the iconic Sicilian Dress,which Hal Rubenstein cites in his book, 100 Unforgettable Dresses. 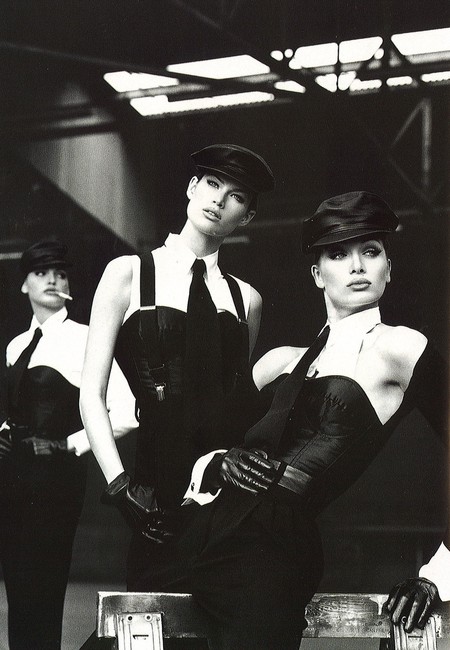 At D&G, the Italian mamma’s boy cliché rings true in the best way possible; their first collection was called ‘Real Woman’, and Dolce and Gabbana have championed the idea ever since. Ranging from the runway pyjama glam of Spring / Summer 2009 collection, through to their Autumn / Winter 2015 show that featured their nephews’ drawings on couture dresses, the duo have always explored interpretations of femininity. Yet at the heart of their aesthetic lies the black bra, arguably the Italian equivalent of every woman’s LBD: appropriate regardless of size, age, and taste.

Another staple of their collections, Dolce and Gabbana imbue the humble pantsuit with a heightened and signature sexuality. Over the years, they’ve walked pantsuits in leather, adorned with sequins, cut short in tweed or lined with neon for a futuristic flair. As Gabbana explained to Alain Elkann: ‘the pieces that you will see again and again (…) are pantsuits, which are absolutely masculine but meant for an androgynous woman.’ In doing so, Dolce and Gabbana ensure that power dressing exists at its most sensual.

Where were Domenico Dolce and Stefano Gabbana born? Domenico Dolce was born in 1958 in Polizzi Generosa, Sicily and Stefano Gabbana was born in 1962 in Milan. Both places remain significant in their lives, though the designers met, work, and live in Milan. Gabbana claims he is ‘the more Sicilian one’ but both often cite Sicily as a source of inspiration for their work.

Where did Domenico Dolce and Stefano Gabbana meet? The duo met in a club in Milan in 1980.

Flowers for us are always an inspiration. Dolce&Gabbana Alta Moda #DGLovesNaples

Where did Domenico Dolce and Stefano Gabbana start working in fashion? Dolce studied fashion at the Istituto Marangoni before dropping out early, confident that he learned everything he needed to know after four months in the three year course. He ended up working for Giorgio Correggiari and, after meeting Gabbana, helped him get a job their too. When Gabbana came back from his obligatory military tour in 1982, the two designers left to create their own consulting studio.

How did Dolce and Gabbana (the brand) begin? Strangely enough, the name was born out of practical reasons. In an interview with the New Yorker, the duo revealed that when they left Correggiari and started working from their one-bedroom apartment, their accountant suggested that they combine their finances, urging them to ‘put Dolce and Gabbana at the top’ of their invoices.

When did Dolce and Gabbana present their first collection? The duo’s debut happened in 1985 in Milan, featuring their friends as models alongside other new Italian designers. They opened a store in the city a year later.

When did Dolce and Gabbana present their first menswear collection? After launching leotards in 1987, and underwear and swimming costumes in 1989, the fashion house introduced their first men’s collection in 1992.

Famous Dolce and Gabbana quotes to commit to memory

It is not necessary to be too avant-garde, because you risk not being understood. DD

We built our fashion around three fundamental concepts: Sicily, tailoring, and tradition. Our dream is to create a style which is timeless. DD

We work with romance. Today, you need emotion when you buy something, you have to love it. SG

We make clothes that make you feel, make you dream an Italian dream. DD