The Story Behind Capuchin Monastery Catacombs 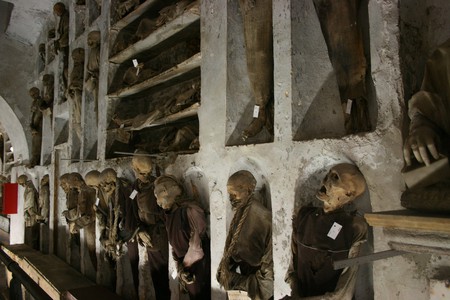 One of the most unusual and admittedly ghoulish sites in Palermo has to be the Capuchin Monastery Catacombs. If you are looking for a conversation starter for your next dinner party, schedule a visit here. If you dare.

In the 1600s, the cemetery overseen by the Capuchin monks was full. Instead of expanding the traditional burial grounds when Brother Silvestro of Gubbio died, the monks decided to excavate the crypts below the cemetery and mummified him so they could continue to be and pray with him. It is this monk who greets you at the entrance to the catacombs all these hundreds of years later.

I'm not sure what the sudden surge in interest in the death related material is due to, but I was asked to write an article for an Italian magazine about the mummies in Sicily. I don't have time to, but its nice to know people care. All of the interest now comes from Italy–I guess it should, since they have the finest macabre sites in the world there. As for the mummies, there is only one set (in Palermo) that's famous, but there are many others hidden away under churches. Photo circa . . . mmmmmaybe three years ago, when I was compiling material for my last book. #mummies #death #mementomori #catacombs #palermocatacombs #sicily

After a few centuries of this being a practice only for the Capuchin monks, they decided to expand and offer this type of burial to residents of Palermo who could afford it. Preservation methods for the bodies had been perfected by the monks over the years, such as a combination of the natural atmosphere of the catacombs and a series of drying rooms with a ceramic piped draining system began the process. The bodies were then bathed in a vinegar solution and stuffed with hay. Families provided clothing to dress their loved ones and frequently came to visit with them. This was a costly endeavor, a sign of prestige and one that only the wealthiest families in Palermo could afford due to the expense of the upkeep. Sometimes that included regular costume changes.

Photo I took couple years ago when working on my third book; in the Chapel of the Virgins, Palermo Catacombs. The ghost of this woman was accused of tormenting a German soldier during World War II by appearing repeatedly to ask for sex . . . when he declined the story got weird(er). Find out more? Tomorrow night I'm doing a lecture on sex ghosts and erotic hauntings, Hyperion Tavern, 1941 Hyperion, Los Angeles, 10 pm, with music and/or ukulele afterward. Free. Oh!–and in Chicago on Oct. 25. And as for her . . . died a virgin and was mummified and placed in a locked chapel dedicated solely to the virginal dead–apparently dying with your virginity intact was something of a feat back in old Palermo. #mummy #skeleton #humanskeleton #palermocatacombs #palermo #sicily #ghoststories #laevents #mementomori

The warren of rooms are divided into separate sections. Priests are dressed in their clerical vestments and military and public officials still wear their dress uniforms. There are dedicated rooms for virgins, women, men, children and infants. Some bodies are embalmed and displayed in glass caskets while others are hung in a standing position from the walls. Many of the bodies are now protected by wire cages because people were taking bones as macabre souvenirs.

Rosalia Lombardo was an Italian child born in 1918 in Palermo, Sicily.  She died of pneumonia on 6 December 1920.  Her father was so grief-stricken that he had her body embalmed to preserve her.  Rosalia’s body was one of the last corpses to be admitted to the Capuchin catacombs of Palermo in Sicily, where it is kept in a small chapel encased in a glass covered coffin. #instant_4n6 #forensics #corner #medical #csi #forensic #forensicscience #italy #rosalialombardo #palermo #capuchincrypt

One of the most famous and heartbreaking residents of the catacombs is Rosalia Lombardo. Rosalia was just two years old when she died tragically of pneumonia. She appears dressed in a party dress, as if she is just sleeping in a glass coffin, her body perfectly preserved with a slight purple cast. The embalming technique was a mystery until Italian biological anthropologist, Dario Piombino-Mascali, who works with the Institute for Mummies and the famous Iceman in Bolzano, tracked down living relatives of the embalmer. Alfredo Salafia was a Sicilian taxidermist and embalmer who died in 1933. His handwritten notes outline a chemical formula of formalin, zinc salts, alcohol, salicylic acid and glycerin that account for the incredible condition of the sweet lost Rosalia.

The catacombs are said to hold 8,000 bodies but the number is probably closer to 2,000, some of them quite notable. Rumor has it that celebrated writer of the novel The Leopard, Giuseppe Tomasi di Lampedusa is here, but his body is actually buried at the nearby cemetery. There are members of the Sicilian aristocracy, lawyers, doctors, artists and even the son of a Tunisian king inside, their preserved bodies dressed in clothes they wore in life resting for eternity below the streets of Palermo.