The Pope Now Has a Personalised Space Suit with a Cape 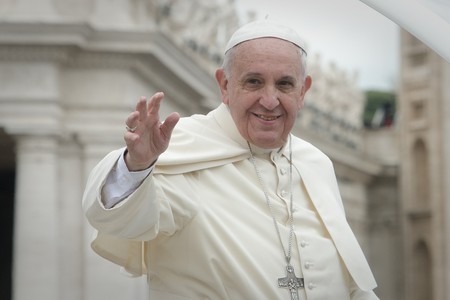 Most often seen in a flowing white cassock and small, round skullcap known as a zucchetto, Pope Francis has just received a state-of-the-art addition to his wardrobe. The upgrade came courtesy of a group of astronauts from the International Space Station who have given His Holiness his very own custom-made blue flight suit, complete with a special papal cape embroidered with the flag of Vatican City.

The one-of-a-kind gift was presented to Pope Francis on June 8 by the Italian astronaut and engineer of the European Space Agency Paolo Nespoli and NASA commander Randolph Bresnik. The pair was joined at the Vatican by four other astronauts from Expedition 53, which ran from September to December 2017. The mission was tasked with studying cosmic ray particles, investigating treatments for muscle atrophy and analysing the abilities of a new drug to accelerate bone repair.

“Since the habit makes the monk, we thought we’d have a flight suit like ours made for you,” Nespoli told the pope, who quipped back, “And you will plan my trip!”

The suit features the crest of the Holy See, the Argentine flag and Pope Francis’ birth name, Jorge Bergoglio. As Nespoli explained, the suit is “really real”, fashioned from the same special material as the astronaut’s suits and made especially so the pope can fly into space, should he wish to do so.

Nespoli then unveiled a final pontifical flourish to the outfit – a specially designed white mantle, or cape. Designed to be worn over the blue jumpsuit, the short cape features the Vatican flag and a patch with the official NASA wings and “Papa Francesco”, or Pope Francis, embroidered below. 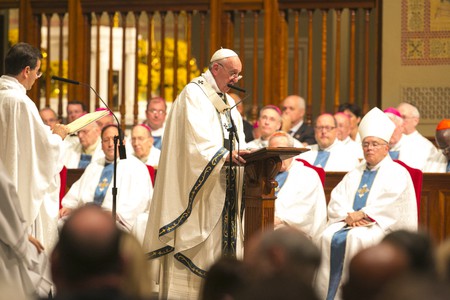 This wasn’t the first time the astronauts had chatted with the 81-year-old pontiff. They had previously spoken last year via a satellite video call between the Vatican and the International Space Station, 400km (250 miles) above Earth.

The pope told the astronauts they were privileged to be able to see the planet “from the eyes of God” and asked them how their new perspective outside of the Earth’s atmosphere had enriched their lives.

Remembering that conversation from space, Bresnik, commander of Expedition 53, told the Catholic News Service that the whole crew was energized after talking to the Pope, regardless of their religion. Looking at Earth from space, Bresnik recalled, shows a world without borders. “It touches people in their soul, I think. I think nobody comes back without a sense of a higher being.”

The outfit is the latest in a long line of gifts given to the pope – he’s already received a classic motorbike and a brand new sports car.