The Most Historical Restaurants In Italy 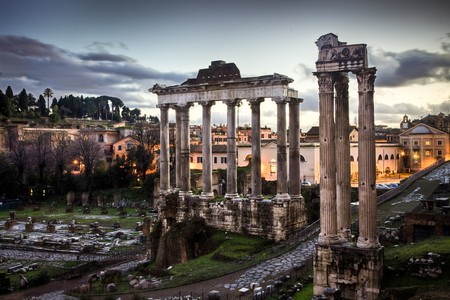 With its roots in the ancient Roman Empire, Italy has long been a source of inspiration and influence in western culture and has one of the most celebrated national cuisines in the world. Any of the restaurants on our list of historic restaurants, will offer great Italian taste and fabulous surroundings to enjoy it in.

Restaurant, Bistro, Romanian, $$$
Facebook
Email
Twitter
Pinterest
Copy link
Share
Map View
One of the oldest restaurants in Rome still run by the same family, Checchino dal 1887 serves authentic Roman cuisine. What began as a wine store in the late 19th century morphed into a bistro where slaughterhouse employees would bring the meats they received as part of their wages to cook. Over the years Checchino has had a distinct influence in defining Roman-style food culture with its invention of Coda alla Vaccinara, a dish that is now considered a quintessential element of Roman fare. If you’re wondering what exactly Coda all Vaccinara is, it’s a stew of oxtails sprinkled with chocolate shavings. Today, Checchino dal 1887 offers an excellent tasting menu that includes desserts and wine pairings.
Open In Google Maps
30 Via di Monte Testaccio, Roma, Lazio, 153, Italy
+393335855055
Visit Website
Visit Facebook page
Give us feedback

Restaurant, Romanian, $$$
Facebook
Email
Twitter
Pinterest
Copy link
Share
Map View
Hostaria Antica Roma is located in Rome’s Appia Antica archaeological park and situated amid ancient Roman ruins. This makes it the place to go if you’re looking to get a history lesson too, while you dine in the shadow of the high walls of a ruined columbarium. Along with its enchanting atmosphere, Hostaria offers a menu filled with traditional Roman recipes, in particular, the Apicius cake, which the restaurant claims to make from the same recipe used during the heyday of the Roman Empire.
Open In Google Maps
176 Via Appia Antica, Roma, Lazio, 178, Italy
+39065132888
Visit Website
Give us feedback

Restaurant, Seafood, $$$
Facebook
Email
Twitter
Pinterest
Copy link
Share
Map View
Antica Trattoria Poste Vecie is a restaurant housed in an old post office building that dates back over 500 years. In typical Venetian style, you must cross a bridge in order to enter, and the historic décor alone is enough reason to pay a visit. The restaurant is adorned with frescos, and there is an antique hearth with a fire in the evenings. Antica Trattoria Poste Vecie serves traditional Italian fare with an emphasis on seafood, which is naturally a staple in this city, from lobster and scallops served in their shells to squid pasta.
Open In Google Maps
Calle de le Beccarie, Venezia, Veneto, 30124, Italy
+39041721822
Visit Website
Give us feedback

Restaurant, Italian, Dessert, $$$
Facebook
Email
Twitter
Pinterest
Copy link
Share
Map View
Ristorante Buca San Giovanni is housed in an old Florentine church edifice dating back to the 1300s. Its stone archways and religious motifs serve as constant reminders of the legends surrounding this place. Many believe that in addition to serving pious purposes, this cellar served as the place where the infamous medieval Rosa Croce society would hold secret meetings. This building has served as a restaurant, however, since 1882. Today, the food is largely comprised of modern twists on age-old Italian favorites. You can find enormous steaks, pastas, salads, risottos, and decadent desserts of all kinds here. Plus, if you choose to eat on the patio, you can enjoy a breathtaking view of the Duomo.
Open In Google Maps
8 Piazza di San Giovanni, Firenze, Toscana, 50122, Italy
+39055287612
Visit Website
Give us feedback

Bar, Restaurant, Wine Bar, Italian, Wine, Romanian, $$$
Facebook
Email
Twitter
Pinterest
Copy link
Share
Map View
If you’re in Florence, you have to sample some local Italian wines, and Antica Mescita San Niccolò is the place to do it. Formerly the customs station for wines that entered the city through the Porta di San Niccolò, this building was converted into a wine bar more than 200 years ago. In the late 1960s, there was a flood in the cellar of the building, and during subsequent restorations, a Roman crypt was unearthed. Today, you can eat in proximity to the crypt amid other antique décor. The menu features regional Tuscan favorites and wines.
Open In Google Maps
60 r Via di San Niccolò, Firenze, Toscana, 50125, Italy
+390552342836
Visit Website
Give us feedback

If you find yourself in Napoli, it’s imperative that you indulge in some of the best pizzas in the world. Standing at the center is Pizzeria Starita, an historic establishment made famous by its appearance in the classic film L’Oro di Napoli. This pizzeria is so good it serves as a school for pizza makers from all over the world. There are over 60 different types to choose from, all of which are cooked to crisp perfection. The simple margarita pizza alone will rock your world.

Restaurant, Gluten-free, Sushi
Facebook
Email
Twitter
Pinterest
Copy link
Share
Map View
In Capo d’Orlando on the island of Sicily, you will find La Tartaruga restaurant in the hotel by the same name. Its location overlooking the Bay of San Gregorio is likely to draw you in, but the superb food and service will make you stay. The menu features fresh seafood, ranging from traditional Sicilian dishes to sushi. There are also excellent beef dishes, salads, cheeses and ravioli on offer. You can enjoy breakfast, lunch, and dinner at La Tartaruga on the lovely terrace taking in a view to remember. La Tartaruga even offers gluten-free options, something that can be hard to find in Italy.
Open In Google Maps
41 San Gregorio, Capo d'Orlando, Sicilia, 98071, Italy
+390941955421
Visit Website
Visit Facebook page
Give us feedback

It’s hard to miss Alle Terrazze as it is located in a bright white Liberty building, striking against the backdrop of blue waters. For over 100 years this place has attracted Sicily’s wealthiest inhabitants, as well as European royalty, actors, and singers with its impressive fine-dining experience. The menu has a particular emphasis on seafood, which is incredibly fresh.

Restaurant, Italian, $$$
Facebook
Email
Twitter
Pinterest
Copy link
Share
Map View
Porto di Savona is one of the oldest restaurants in the city of Turin and opened in 1863 when the city was still the country’s capital. The restaurant has maintained much of its classical look and many of its period architectural details, with a lovely tiled floor in particular. There are a variety of homemade pastas to choose from in addition to roasted meats and other authentic regional dishes that vary with the season.
Open In Google Maps
2 Piazza Vittorio Veneto, Torino, Piemonte, 10123, Italy
+390118173500
Visit Website
Give us feedback
Give us feedback