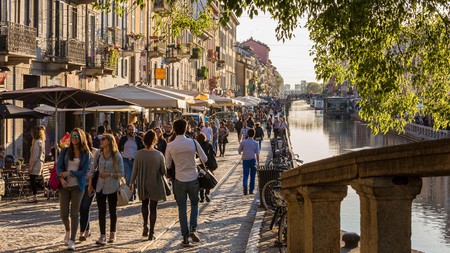 Taking a road trip across Italy is probably the best way of exploring this diverse country. To help guide you, we’ve picked our favourite cities to include on your itinerary, along with the unmissable highlights in each destination that make them stand out from the crowd.

From mouthwatering chocolate treats in Turin to precious artefacts in Rome, we’ve chosen the ultimate destinations of this Mediterranean wonder. Browse our selection of cities worth visiting on a road trip across Italy – listed from north to south – and start planning your Italian adventure.

Elegant and packed with history, Turin is the ideal place to start your trip. The first capital of Italy is filled with baroque architecture – the greatest examples being the majestic Palazzo Reale and Palazzo Madama – which sit beside splendid art nouveau buildings and a few Rationalist ones along the wide Via Roma. Take a long walk by the river at Parco del Valentino and pass by Mole Antonelliana, now housing the National Museum of Cinema, the tallest museum in the world. Turin is also where you will taste some of the finest chocolate in the country, offered in historic coffee houses. 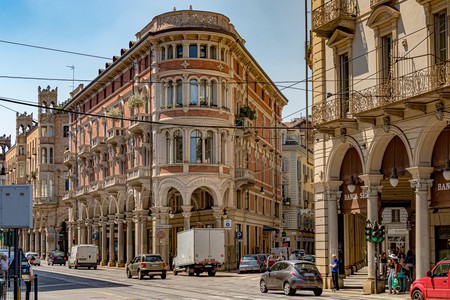 This city might be known as the fashion capital of the world, but there’s so much more to do here. Visit the impressive Milan Cathedral, the largest church in Italy that took nearly six centuries to complete, marvel at The Last Supper, Leonardo da Vinci’s 15th-century masterpiece, in the refectory of the Convent of Santa Maria delle Grazie, and catch an opera at the iconic La Scala. For modern art, pop by Fondazione Prada, and for some serious shopping don’t miss Galleria Vittorio Emanuele II, a lavish, four-storey double arcade with a glass-vaulted roof, hosting all the prestigious fashion houses. 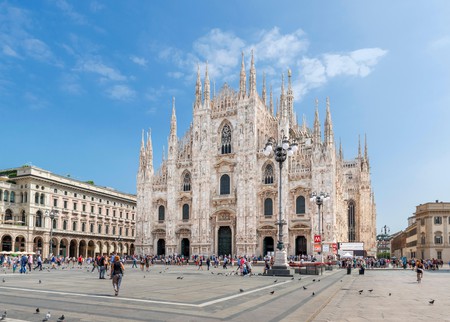 You’re probably familiar with the charming Verona through Shakespeare’s most revered play, Romeo and Juliet, which used it as its setting. You can actually visit Casa di Giulietta, the gothic-style 1300s house with the stone balcony that’s said to have inspired the one in the play. But don’t stay too long; equally romantic castles and churches await, such as the Castel San Pietro or the stunning Basilica di San Zeno (which also inspired Romeo and Juliet’s wedding venue). Attend a concert at the historic Arena, dating to ancient Roman times, and follow a hedge maze in the lush Giusti Gardens. 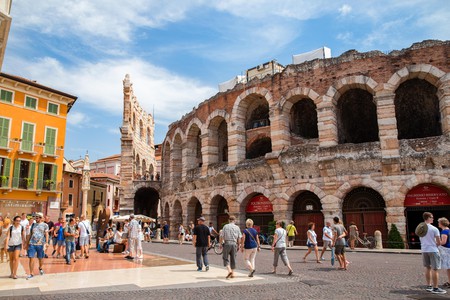 The most prominent feature in this idyllic city is undoubtedly its canals. These are lined with Renaissance and gothic palaces, making Venice the ideal destination for a dreamy honeymoon or a lovely weekend escape. There are no roads here, so you’d be advised to hop on a vaporetto – or a gondola, if you wish – and discover as many of Venice’s 100-plus islands as possible, including the picture-perfect San Giorgio Maggiore. Among the highlights are the towering St Mark’s Basilica with its gold mosaics at Piazza San Marco and the regal Palazzo Ducale. Gallerie dell’Accademia is every art lover’s paradise. 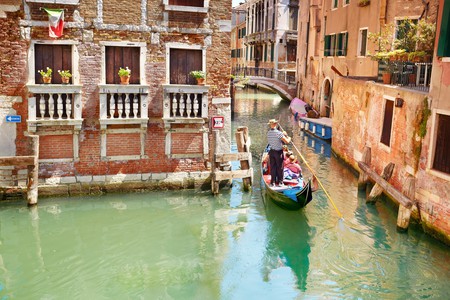 An array of cultural sites and amazing architecture are just some of the reasons to stop by Bologna. The city was once a major cultural and financial hub, having been ruled by Etruscans, Celts and Romans; and it still retains its sophisticated allure. Stroll around the chic Piazza Maggiore, pass by the Quadrilatero market for local delicacies, enjoy magical views from the top of Torre Asinelli, and unearth gems while walking under the many red-hued porticoes – 666 to be exact. Remember to look for the so-called ‘seven secrets of Bologna’, which include a hidden canal, a broken vase and scattered carved phrases. 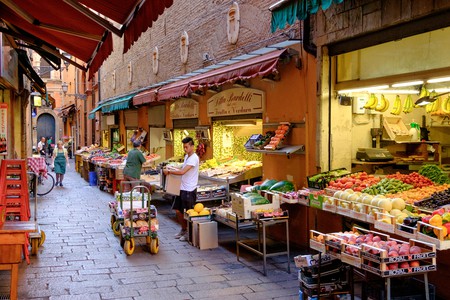 Groceries in the Quadrilatero in Bologna | © Cividin / Alamy Stock Photo

Apart from the emblematic Leaning Tower – or Torre Pendente – Pisa is sure to win you over with its opulent cathedral and all sorts of exquisite buildings that make up the city’s refined skyline. These include the grandiose Campo Santo, the Cathedral of Santa Maria Assunta or the beautiful Palazzo dei Cavalieri and the striking Palazzo Blu gallery. Don’t leave without paying a visit to the church of Sant’Antonio; one of its walls features Keith Haring’s colourful Tuttomondo mural. Pisa also hosts the oldest botanic gardens in Italy, where you will find a variety of gorgeous rare plants and flowers. 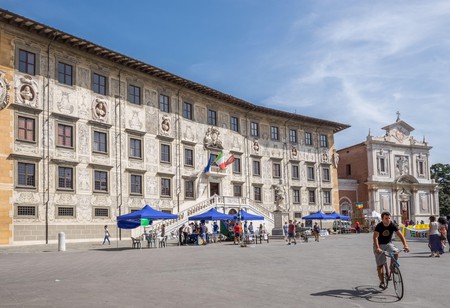 With its Renaissance churches, museums and galleries displaying a plethora of artworks – from Michelangelo’s marble statue of David in Galleria dell’Accademia to Giotto’s elaborate frescoes in Santa Maria Novella – Florence is one of the most artistic cities in Europe. Renowned architects like Filippo Brunelleschi have left their mark on the city’s marvellous palazzos and bell towers, such as the grand Palazzo Vecchio (hosting the region’s supreme governing body for centuries) and the glorious Cathedral of Santa Maria Del Fiore. The Boboli Gardens are perfect for relaxation and endless walks on peaceful pathways. 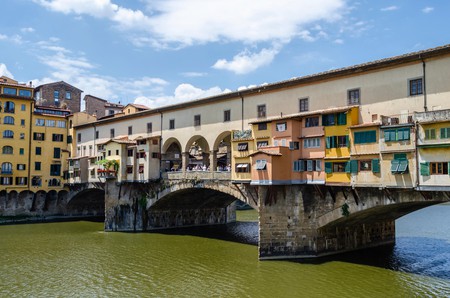 Built around Piazza del Campo, a superb open square framed by medieval buildings – including the gigantic Torre del Mangia, the Palazzo Pubblico and the Fountain of Gaia – Siena is like a fairytale brought to life. Other structures such as the Church of San Domenico and Porta Pispini will have you thinking you’ve stepped right into the Middle Ages. To really appreciate this fully-preserved medieval wonder, walk around the winding streets of the historic centre, which have been declared a Unesco World Heritage site. The legendary Palio di Siena horse race also takes place here twice a year. 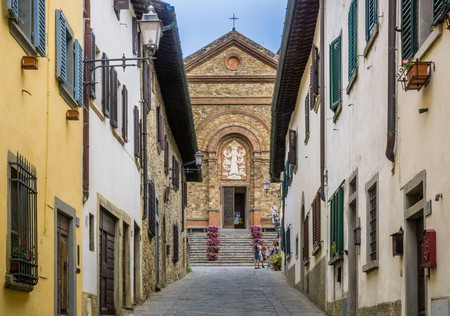 This road trip would not be complete, of course, without Italy’s crown jewel. There’s so much to do in Rome that you will probably need to spend a few days here. From mind-blowing historical buildings like the Colosseum and the Pantheon to sumptuous churches such as St Peter’s Basilica, or eclectic museums – don’t miss the Vatican Museums and Michelangelo’s famous frescoes inside the Sistine Chapel – you’ll never run out of history or art in the capital. And if you get tired from all the culture, catch your breath at the Spanish Steps or in the expansive Villa Borghese gardens, or grab a gelato and toss a coin or two at the Trevi Fountain. 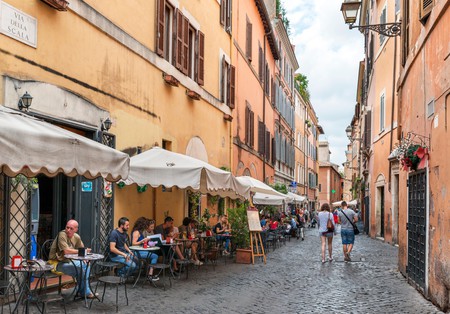 The perfect way to end this Italian road trip is with a stop at Naples. The city is considered the home of pizza so foodies are meant to find their new favourite place on Earth right here. Other than that, Naples is filled with artisanal shops and street vendors as well as some fascinating architecture, such as the Castel dell’Ovo, or Castle of the Egg, whose fortifications are said to be supported by a magical egg. On a darker note, Cimitero delle Fontanelle brims with skulls and bones; a rather gruesome sight, but it’s still worth the visit. Mount Vesuvius, whose eruption destroyed Pompeii around 2,000 years ago, lies a few kilometres away. 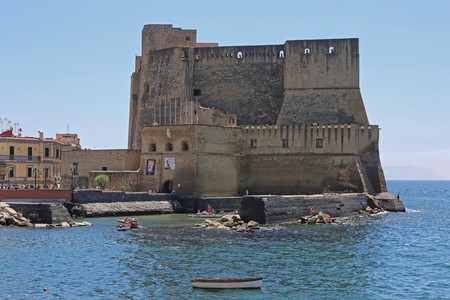