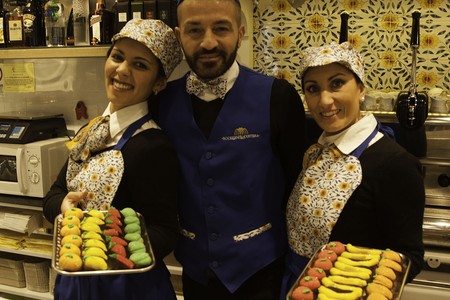 The Christmas season in Italy officially begins with the Feast of the Immaculate Conception on December 8. This day also marks the arrival of local Christmas treats in bakeries on every street corner. For centuries, Neapolitans have been eating the same cookies, cakes, candies and fritters found in pastry shops today. Here are some of the best to try if you visit Italy during the festive season.

No Neapolitan Christmas is complete without struffoli. This sweet consists of balls of fried dough, formed into a cake, drizzled with honey and decorated with brightly colored sprinkles, candied fruits and dragées. Ancient Greeks brought an early version of this dish to Naples nearly 3,000 years ago. Under the Spanish Viceroy rule of Southern Italy, these honey soaked fritters merged with a similar Andalusian sweet called piñonate to become a symbol of Christmas in the city. 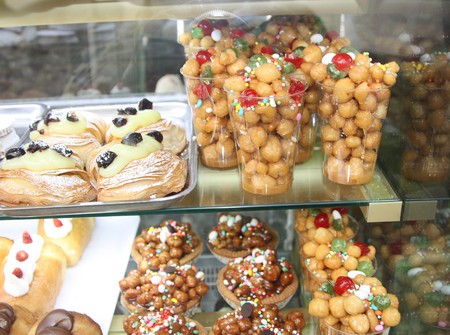 Neapolitans know it’s Christmas when this S-shaped honey sesame cookie appears in bakery windows across town. Along with mostacciouli and roccocò, these cookies are the essence of the holiday season. In the 17th century, cloistered nuns across Napoli combines honey and sesame to create susamielli, which literally means sesame (susa) and honey (miele). To this day, local families serve these cookies to bands of zampognari-bag pipe players who rove Naples around the Christmas season.

Related to the susamielli, the sapienza cookie is another symbol of Christmas. The cloistered nuns of the Santa Maria della Sapienza Convent in the heart of Naples were excellent bakers of the classic susamielli. To distinguish the superiority of their product, these baking nuns added almonds on top of their S-shaped pastries. Today you can find both versions in pastry shops. 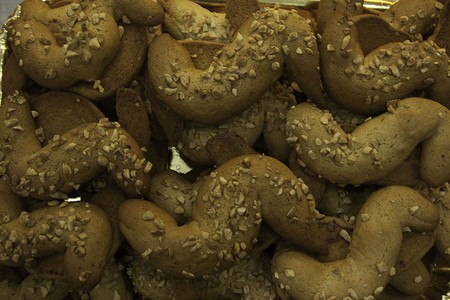 Christmas inevitably coincides with chestnut season. In the mountains surrounding Napoli, you will find a favorite sweet of calzoncelli di castagne—chestnut fritters. While local bakeries sometimes carry this emblematic mountain dessert, it is always best when a loving mamma prepares large batches of it for the holidays. Chestnut foraging is common in and around Naples, and hence this fritter, which comes stuffed with hazelnuts, chocolate, pears and chestnuts.

As the temperatures drop in Naples, local families begin preparing a spice mixture known as pisto. Bakers jealously guard their secret recipes but generally pisto consists of white pepper, nutmeg, cinnamon and cloves. The most famous Neapolitan dessert featuring pisto is roccocò, a doughnut-shaped biscotti. Flecked with almonds and tossed in pisto, roccocò is perfect when dunked in coffee (or mulled wine!) on a chilly Christmas morning. 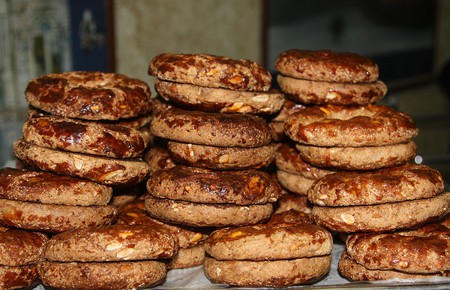 Chef Bartolomeo Scappi famously served these diamond-shaped cookies to Pope Pius V at an ecclesiastic luncheon in 1567. Made of honey and candied fruit dough, mostacciuoli are dunked in dark or white chocolate, and are often enjoyed with an after meal digestif such as limoncello or grappa. 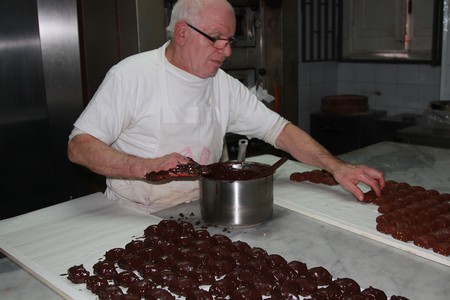 These zeppole are southern Italian Christmas doughnuts. In Sorrento and the Amalfi Coast, Zeppole di Natale are garnished with lemon and orange zest, candied fennel seeds and lots of sugar. In Sorrento’s Santa Lucia neighborhood, the Church of Santa Lucia serve these fried sweets on December 13, in honor of their namesake.

Norman rulers of the Kingdom of Two Sicilies enjoyed this version of marzipan known as pasta reale or “royal dough”. Invented by nuns in Palermo, the royal dough migrated north to Naples eventually becoming a Christmas treat. As Christmas approaches, bakers across Naples fashion this almond dough into tiny intricately crafted fruits that are almost (but not quite) too cute to eat.

On New Year’s Eve, after a feast of fish, Neapolitan families bring out the cassata. A traditional sponge cake, cassata is stuffed with sheep ricotta, maraschino cherries, candied fruits and chocolate chips. Even if you have eaten seven courses of food, somehow you still find room for your New Year’s Eve cassata. After all, it’s tradition. 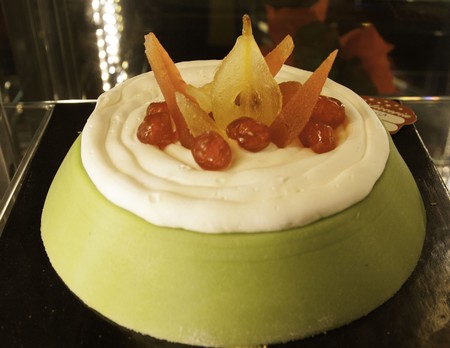 Related to the cassata cake is the miniature version known as raffiuoli. In the 17th century, nuns at San Gregorio Armeno church formed a bite sized version of cassata stuffed with marmalade and pistachios. They called these little cakes raffiuoli after a stuffed northern pasta dish they had heard of—known as ravioli. The name (and the sweet) caught on, and raffiuoli became a holiday favorite.