Swiss Guards at the Vatican Will Be Sporting 3D Printed Hats 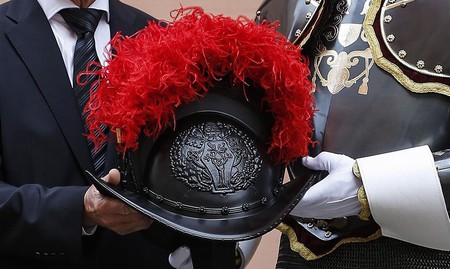 The Swiss Guard – the Pope’s private protectors and the world’s smallest army – has announced that its uniform is getting a contemporary upgrade. The extravagantly dressed guards will be swapping their traditional metal helmets for ones made of plastic and created by a 3D printer. The new headgear was revealed in a press conference ahead of a swearing-in ceremony for 32 new recruits to the force.

The new helmets are printed in one piece from impact-resistant and weather-resistant plastic and, as a result, are much lighter and more comfortable to wear than the previous metal version. The 3D-printed plastic absorbs less heat, while the helmet shell also includes ventilation channels to help keep the guards cool – especially useful during the scorching Italian summer.

Costing €800 to €900 to produce, the printed helmets represent a significant saving for the Swiss Guard, with the old metal headgear costing about double that. Production time is also greatly reduced from around 100 hours to just 14.

An initial run of 40 helmets has already been financed by private sponsors and the Swiss Guard is now hoping to raise funds for the production of another 60. The initiative to manufacture the helmets using modern technology was overseen by Swiss engineer Peter Portmann.

The new helmets feature the coat of arms of Pope Julius II who founded the army in 1506 and also commissioned Michelangelo’s decoration of the Sistine Chapel ceiling. The plastic hats will be used for ceremonial occasions as part of the Swiss Guard’s distinctive red, yellow and blue dress. During regular duties, guards wear a simpler blue uniform topped with a black beret. 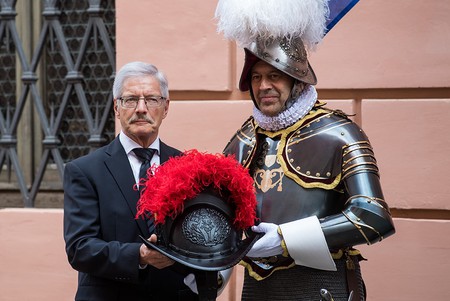 Commander of the Pontifical Swiss Guard Christoph Graf presented a prototype of the new PVC helmet at a press conference ahead of an annual swearing-in ceremony that, this year, saw 32 new recruits join the force (the ceremony takes place on May 6 to commemorate the death of 147 guards who died protecting Pope Clement VII from the troops of Emperor Charles V during the Sack of Rome in 1527).

“We have to keep up with the times,” Graf told Die Presse, a German-language daily broadsheet based in Vienna. Emphasizing the need to balance tradition and innovation, Graf explained any future changes would have to be practical: “We would not make a halberd out of plastic,” he said, referring to the distinctive two-handed pole weapon carried by halberdier troops of the Swiss Guard.

Also announced were plans to increase the total number of guards from 110 to 135. In order to be a member of the Swiss Guard, potential candidates must meet a number of strict criteria including being Swiss, Catholic and aged under 30. 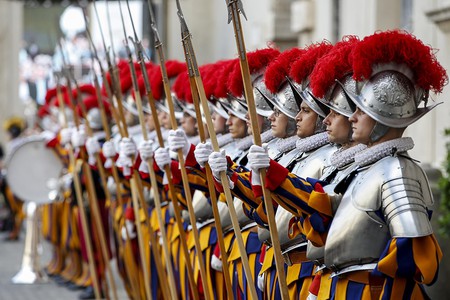