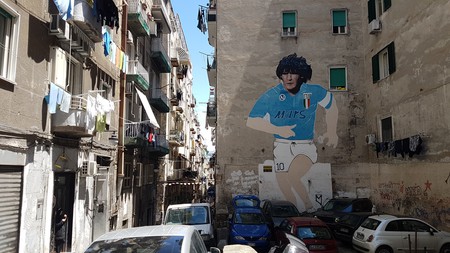 Footballer Diego Armando Maradona joined Napoli for a then world-record fee and promised to restore the southern Italian city to its former glory. Here’s a look at how seven tumultuous years created a legend and helped transform Naples forever.

“You have to understand Naples to understand how the arrival of Maradona changed the city,” Fiammetta Luino explains as she talks about the city she visited a dozen or so times in the past few years. Luino served as an archive producer and assistant producer on Diego Maradona, the latest documentary film by Amy (2015) and Senna (2010) director Asif Kapadia. 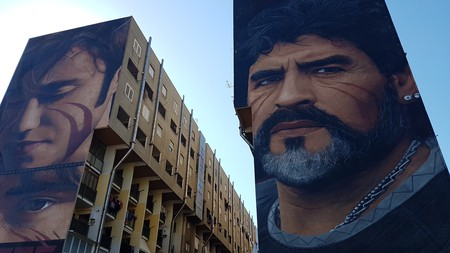 “There has been a mentality here [in Naples] of waiting for a saviour. The people feel like they have been robbed by the north for centuries, but that someone will eventually come to help them,” says Luino, who was tasked with trawling through hours of existing footage, as well as tracking down previously unseen clips in Italy for the film. Her colleague Lina Caicedo did the same in Maradona’s birthplace, Argentina.

Maradona was born in a poor neighbourhood of Buenos Aires. His prodigious talent and natural skill with a ball at his feet were instantly recognised by scouts, and he was fast-tracked into a local youth team. Smaller than most of the players around him, Maradona still stood out thanks to his exhilarating ability to dribble past players and single-handedly turn games on their head.

Following a brief stint in Barcelona, rumours began to swirl that the player was to move to Italy. It was assumed that Maradona would sign for one of the big northern teams, Juventus, Milan or Inter, which were among the richest teams in the world.

Instead, the footballing world was stunned when the Argentine ran out in front of 75,000 jubilant Neapolitans in the summer of 1984. One of the poorest districts in the country had just signed the most expensive player in the world.

As one local newspaper at the time put it, the city lacked “[a] mayor, houses, schools, buses, employment and sanitation, but none of this matters because we have Maradona.”

The saviour had arrived… 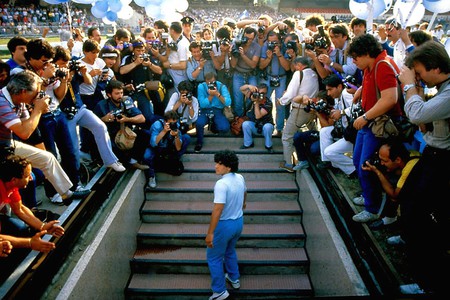 What Maradona’s arrival meant to Naples

The fans were so excited at the signing that no one thought to, or wanted to, ask how the money was raised. Maradona’s subsequent closeness with The Camorra, the fearsome criminal organisation that ruled Naples, led to several rumours, but at the time hope outweighed worry. Fans also knew the local financial institutions had helped push the deal through, leading to chants every time Maradona was fouled on the pitch that the Banco di Napoli had also fallen.

The Irpinia earthquake of 1980, which had killed thousands and displaced many more, had left parts of the city in ruins. Rival gangs openly fought in the streets, and the region was in a spiral of depression. “It seemed impossible that the deal [with Barcelona] would happen,” recalls sports journalist Francesco Marolda.

“One thing to remember is that there were no TV rights at the time in the early ’80s. If you wanted to see your team, you had to go to the stadium, and that’s where Napoli were able to compete with other teams in Italy. They made more money than any other club from attendances,” Marolda adds, highlighting just how passionate the local fans were despite the lack of on-field success.

“This passion can turn into a suffocating love,” Luino explains. Maradona was to experience this first-hand a few years later. 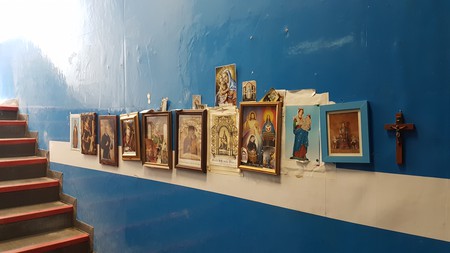 The entrance to the field of play at the stadium. Maradona would touch this religious gallery before heading up the stair and onto the pitch. | © Culture Trip

The move to Napoli wasn’t an instant success, but Maradona knew where the problems lay. He demanded that better players be signed, and subsequently the team went on to became “good enough,” with one great player at the helm.

Marolda followed Maradona throughout his time in Naples and grew close to the player. They only fell out on one occasion when the journalist wrote about the player’s late-night activities hinting at the substance abuse that plagued the footballer throughout his career. Maradona speaks openly about his expensive drug habit in the movie, but at the time he denied initial reports.

“Maradona still gave us some incredible moments of joy to the city. He brought the name of Naples to the world, but the history, spirit and the character of the city have always been there,” Marolda says when talking about the legacy of the diminutive number 10. 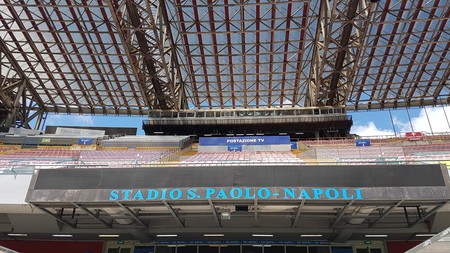 Maradona’s time in Naples was further complicated in 1986 when a local woman, Cristiana Sinagra, claimed to be pregnant after an affair with the player. Paternity tests later confirmed Maradona to be the father of Sinagra’s child, but at the time Diego refused to acknowledge his son. This tainted his reputation with fans and media across Italy, where family responsibilities are seen as a cornerstone of society, but in Naples there was only ever going to be one winner in the battle between Sinagra and Maradona. The player was loved by the city but was also beginning to feel like he couldn’t leave the city if he wanted to. 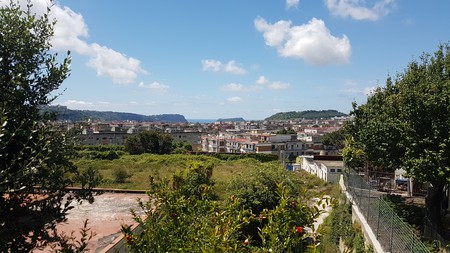 Neapolitans have long felt that the Risorgimento (Italian unification) had been unfair to Naples. Power and wealth were perceived to have been concentrated in the north, leaving other parts of Italy ostracised. Maradona’s failings would be forgiven as long as he continued to defeat the teams from the north.

The scene was set for the unforgettable 1986-87 season, which is still celebrated in Naples today.

Napoli superfan Gennaro Montuori became close friends with Maradona, often travelling with him around Italy. Today Montuori operates a supporter-led TV channel from his Ultras office in a residential part of Naples. The walls are covered with pictures of Maradona’s time in the city and in particular the 1986-87 season, which saw the scudetto arrive in Naples. 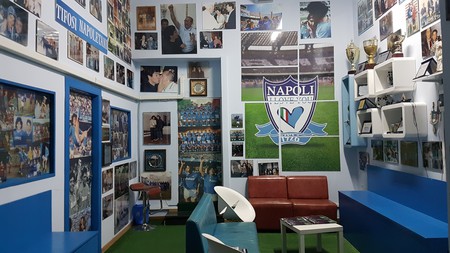 This defensiveness is understandable given that Maradona helped to deliver the title in the spring of 1987. After a long season, Napoli broke away at the top of the table and fans began to believe the impossible was about to come true.

“We didn’t have any doubts. We knew Maradona, who would be able to dribble a small orange up three flights of stairs for fun, would be able to win [the title]. I used to play some football, and when I saw him for the first time I knew that we would get the scudetto,” Montouri adds.

No mainland team from the south had ever won the title, but Napoli went on to win the double that season. The streets were awash with the sky-blue colours of the team, and fans celebrated for weeks. Footage in the film highlights how much the victory meant to the people of Naples and how the fans had elevated Maradona to an icon.

How the dream turned into a nightmare

When Maradona eventually stopped playing for Napoli in 1991, the relationship between the player and the fans had broken down. Maradona wanted out, feeling like he was being held hostage by Naples. Fans also held on to rumours that the team “threw” the scudetto the season after winning it for the first time at the orders of the Camorra, who stood to lose millions through illegal bets.

“Naples is a city that devours its own heroes. Maradona conquered Naples, but then he was held hostage by the city,” di Meo says. “The story of Masaniello [who led a popular uprising against Spain in 1647 only to be murdered in the same square he began his revolution in] is an example of this. Maradona is seen as a kind of Masaniello character, a sort of Braveheart even.” 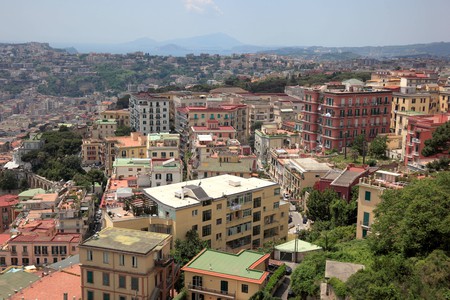 That’s not to absolve Maradona of his own flaws either. In the grip of a devastating cocaine addiction, Maradona began training less and fell under investigation for his links to powerful figures in the Neapolitan underworld. In the early years the club cared little about what was going on off the pitch, but this changed when more allegations came out.

Just as the World Cup of Mexico in 1986 had cemented Maradona’s legendary status in the eyes of the world, the tournament of 1990, held in Italy, was set to destroy his Italian fan base. Capitalising on the support of his own fans, Maradona appealed to the Neapolitans in his city to support Argentina against Italy in a semi-final game held at Napoli’s stadium. Argentina won, but Maradona knew he had overplayed his hand and relations between the player and the Italian media were stretched to the breaking point.

He had also made a powerful enemy in the form of the Italian Football Agency, which began a series of stringent anti-doping tests that Maradona failed. Maradona was forced to go into rehab and was banned from the game for 15 months. He officially left Napoli in disgrace in 1991, eventually signing for Spanish club Sevilla as his career wound down.

The legacy of Maradona in Naples 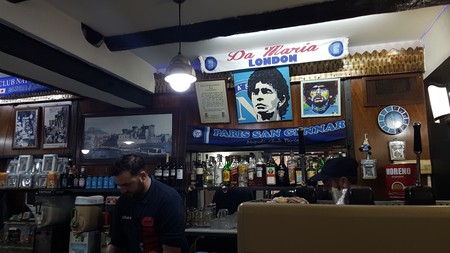 Tourism in Naples has rapidly increased in recent years. The past decade has seen huge levels of investment in the city and a clampdown on the criminal gangs that instilled fear in residents and visitors.

Souvenir stands will have scarves, T-shirts and posters of Maradona alongside pictures of Mount Vesuvius and necklaces of red chillies. That last item is seen as a symbol of luck across the region, with every taxi having one hanging off the rear-view mirror.

Elsewhere, bars and restaurants have pictures of Maradona and framed newspaper pages from the scudetto-winning season. Bar Nilo has a shrine dedicated to the player, which includes several strands of hair and the ‘tears of Naples’ from the day Maradona left the city. 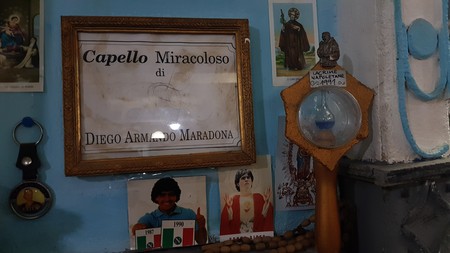 Strands of Maradona's hair and the 'tears of Naples' from 1991, the year the player left Napoli | © Culture Trip

The enduring legacy is that the city and Maradona are inextricably linked in the hearts and minds of all football fans.