Italian architect Francesco Borromini described himself as an innovator who wanted to be ahead of his peers. Born in 1599 at Lake Lugano, the artist designed and built many monuments and churches in Rome until he suffered from mental disorders and then committed suicide in 1667. 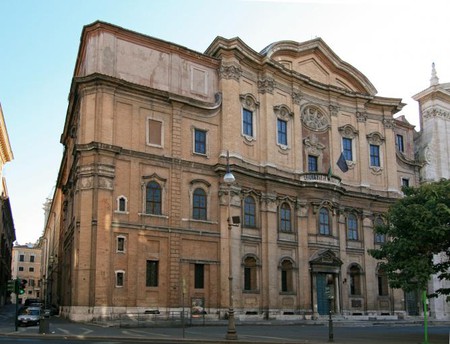 People visiting the church looked up and around in amazement: every architectural element of the ceiling was connected to another one in an extraordinary way, making it impossible to take your eyes away. In 1641 the church San Carlo alle Quattro Fontane in Rome had that effect, according to a contemporary of the architect, Francesco Borromini. That dome is one of his most famous and esteemed designs.

Francesco Castelli, later known as Francesco Borromini, was born on lake Lugano in 1599. Firstly in Milan and then in Rome, the young Borromini studied architecture. Despite the custom of the Renaissance period that every artist was skilled in multiple disciplines, Borromini was one of the first who specialized in just one field.

In Rome Borromini worked most of the time reporting to the famous architect, painter and sculptor, Gian Lorenzo Bernini, despite being antagonists – mainly for the different ways they conceived architecture. Borromini was convinced that Bernini credited others’ successes to himself and cheated him out of money. Other sources say Bernini felt threaten by the talented colleague. True or false, Gian Lorenzo himself tried to break the collaboration as soon as possible, helping his co-worker to obtain the role of architect of Rome’s ancient university La Sapienzain 1632.

Two years later Borromini became an independent architect. From 1634 to 1641 he designed part of the accommodation, courtyard and the church of San Carlo alle Quattro Fontane for the religious order Padri Trinitari Scalzi. This is considered his masterpiece. A concave-convex shape was repeated both in the courtyard and the church, creating a dynamic and enchanting space. 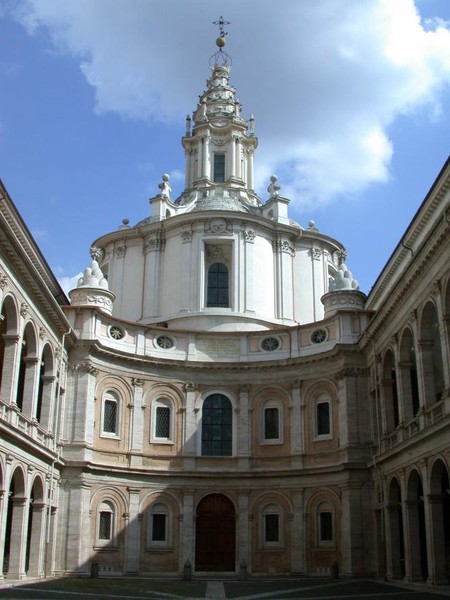 The facade of ‘San Carlino’, a church nicknamed because of its small size, was started in 1665 and completed after Borromini’s death. In the same year the architect devoted his time to Sant’Ivo alla Sapienza in Rome. For the first time the artist abandoned the Renaissance rule of proportions in favor of a geometric scheme. It was a great innovation. Indeed, Borromini used to say he didn’t become an architect just to be a copy of others designs: ‘Who follows the others never goes beyond’, he wrote in his notes. Another important Borromini design was the Basilica San Giovanni in Laterano in Rome. The work was ordered by Pope Innocenzo X in 1646 with a view to his Jubilee: a very good opportunity for Borromini, whose designs were unpopular at the time.

According to his biographer Filippo Balducci, Borromini was a great and talented man, with strong character and worthy aspirations. In spite of his talent, he had an anxious existence, partly because of his complex relationship with his master Bernini. Sadly prior to his suicide in 1667 he destroyed a large number of his drawings and project work. He was very protective about his sketches, as if they were his children. Probably Borromini’s death was a result of his mental disorders. In his last days, Borromini avoided conversations and meetings, he was melancholic and depressed, fixated by his deepest and most turbid thoughts.

Borromini’s face is also famous because in 1993 it was printed on the 100 Swiss Franc banknote, due to his birthplace, Bissòne, by Lake Lugano, nowadays part of Ticino Canton, modern-day Switzerland.