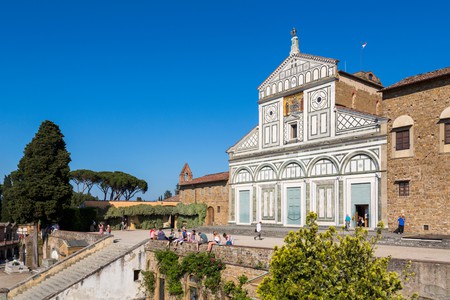 Standing high above the city of Florence, the San Miniato al Monte basilica is one of the most harmonious pieces of Romanesque architecture in Europe. Take a peek behind its richly decorated walls and into the history of this stunning structure. 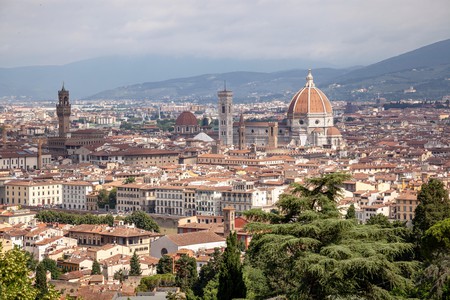 From Piazzale Michelangelo, sitting proudly on a hill behind the south bank of the River Arno, Florence appears at your feet, stretching far into the distance in all its beauty. The city’s skyline is dominated by a panoply of works conceived by the architectural giants of Italy: the immensity of Brunelleschi’s dome and Giotto’s bell tower lording high over the city, the tall tower of the Palazzo Vecchio and the low elongated mass of the magnificent basilica of Santa Croce. But turn away from this impressive cityscape and head up the stone steps to find one of the finest jewels of Romanesque architecture in Italy: San Miniato al Monte (built around 1013-1150), which lies nestled among the lush verdure of the Tuscan hills.

Inscribed upon a marble scroll ornament on the threshold of the Holy Door of the church of San Miniato al Monte are the Latin words Haec est Porta Coeli, meaning “This is the Gate of Heaven”. And, walking through the turquoise-painted doors and into the spectacular church itself, it’s difficult not to feel inspired by this heavenly interior. With its tall marble columns, geometrically patterned archways and gold-leaf-decorated dome, the church is a fine example of the Florentine Romanesque reaching its full maturity. A wonder of faith, beauty and history, San Miniato al Monte has been described as one of the finest Romanesque structures in Tuscany, and attracts countless travellers to admire its awe-inspiring architecture.

The story behind the conception of the church is also one of majesty and wonder. The tale of Minias of Florence speaks of the life of an Armenian king or prince from the Roman army who converts to Christianity and travels to Florence to live a life of solitude on Monte alle Croci. Such a lifestyle choice led to him being denounced as a Christian by Emperor Decius and ultimately, in AD 250, Minias was martyred for his faith. Legend has it that his decapitated body picked up his head and flew over the River Arno to the hillside hermitage where he finally died. Over time the power of the myth led to the canonisation of Minias and over nine centuries later, in 1013, a church dedicated to the saint was erected on the site of his death. The relics of the saint are now preserved in the church’s crypt. 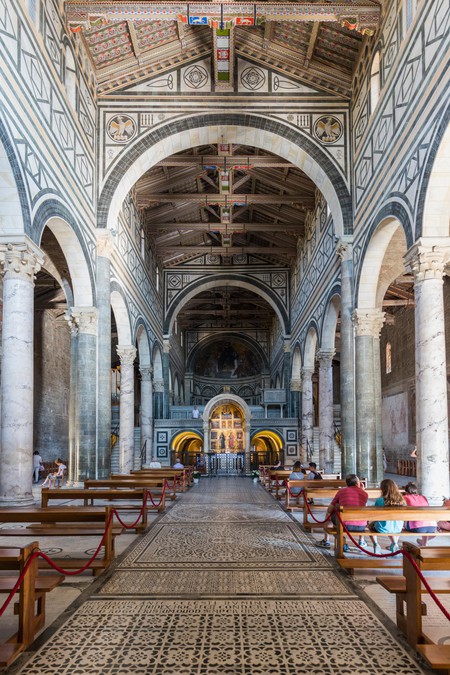 The structure was finished in the 13th century, and a beautiful combination of white carrara and green prato marble now delicately decorate the church’s exterior, while a 12th-century gold-detailed mosaic embellishes the window above the central door. Inside, the Romanesque interior features three naves, an elevated presbytery and a crypt, the last of which is decorated with frescoes by Taddeo Gaddi. Leading down the central aisle runs a marble pavement that depicts signs from the zodiac. Outside, a sprawling cemetery harbours the tombs of illustrious men from Florence’s past, including Carlo Lorenzini (Collodi), the author of Pinocchio (1883). It’s well worth strolling through the cemetery, with its smart hedges and manicured lawns, and taking in the sights of the city below.

Although every surface of the church appears to be covered in mosaics or patterns, the view is dominated by the mosaic in the apse above the choir. The 1297 image of the enthroned Christ giving benediction fills the half-dome and was restored in 1491 by Alessio Baldovinetti. To the right of the colossal image of Christ is St Minias presenting him with a crown, while to his left lies the Virgin Mary. The background depicts a verdant garden copious with paradisal birds and exotic trees and fruits. Around Christ’s regal throne are the tetramorphic images of the four evangelists: St Matthew (the man), St Mark (the lion), St Luke (the ox) and St John (the eagle). But it’s the combination of rich colours and materials upon the expansive backdrop of gold that makes this artwork truly unparalleled. The mosaic is particularly infused with life when the sun shines through the church’s windows, reflecting off the vibrant blue, ochre and gold.

Today, the glittering gold of the apse illuminates the basilica and its surroundings as it did centuries ago, creating a divine ambience within the church’s walls. And with its unparalleled beauty and prominent seat above the city, San Miniato al Montre truly acts as a decorative crown over Florence’s architectural glory. 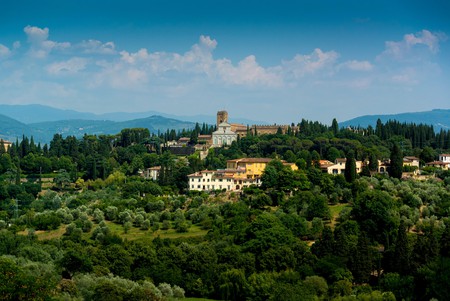