The Best Hotels on the Amalfi Coast, Italy 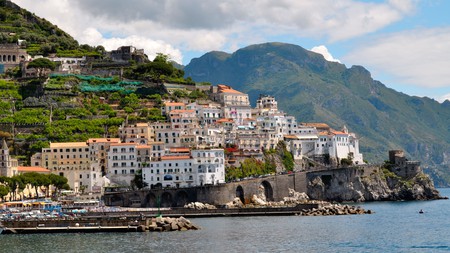 The Amalfi Coast has long drawn the rich and famous to its dramatic shores, dotted with luxury hotels that cling to cliffs above the Tyrrhenian Sea. Stay in one of these top Italian hotels on the Amalfi Coast to experience Unesco-listed hilltop towns, vineyards and kilometres of jagged coastline. Most offer star locations and first-class amenities, including infinity pools, spas and gourmet seafood restaurants. Here’s our pick of Amalfi Coast hotels for your next trip.

Planning a trip? You can experience the Amalfi Coast, as well as Naples, Matera and several fantastic destinations in Puglia, as part of Culture Trip’s specially curated 10-day Southern Italy adventure – led by our Local Insider. 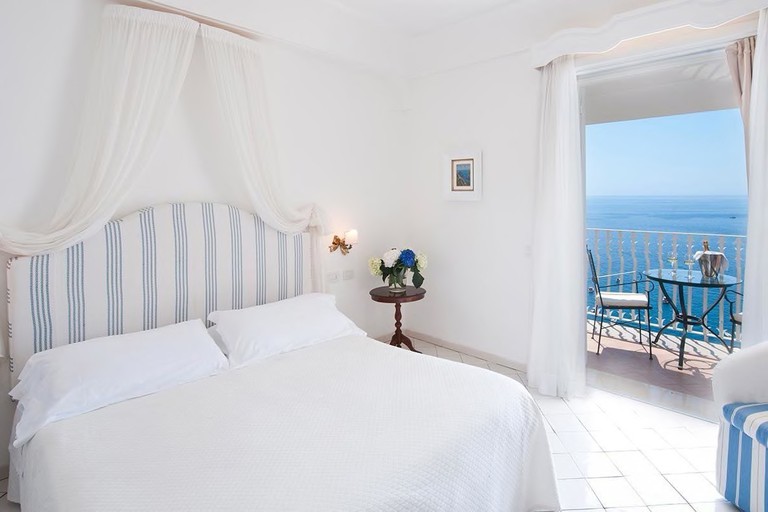 With a private beach 10 minutes away, Hotel Marincanto hugs a rugged cliff face in Positano. Run by the grandchildren of the original owner, a former mayor of the village, this Amalfi Coast hotel has a homely feel with white decor and wooden furniture, along with a spa, a gym and an infinity pool. The rooms are set in the main building and an annexe; the most lavish spaces have balconies with coastal views. A continental breakfast is served on a terrace overlooking the sparkling sea. 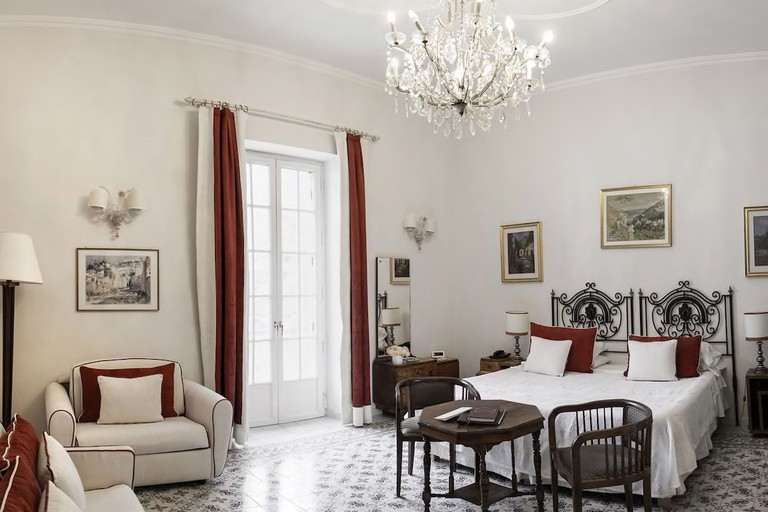 This family-run Ravello property has been hosting guests since 1934, and is loved by celebrities such as Hugh Grant and Susan Sarandon. The stately decor at this hotel on the Amalfi Coast includes a marble staircase, tall ceilings, French windows and ceramic floor tiles. All the rooms have sweeping sea views, and there’s a garden restaurant where you can enjoy the freshest pasta and fine Italian wine. You’ll have access to the pool at nearby Giordano Hotel. 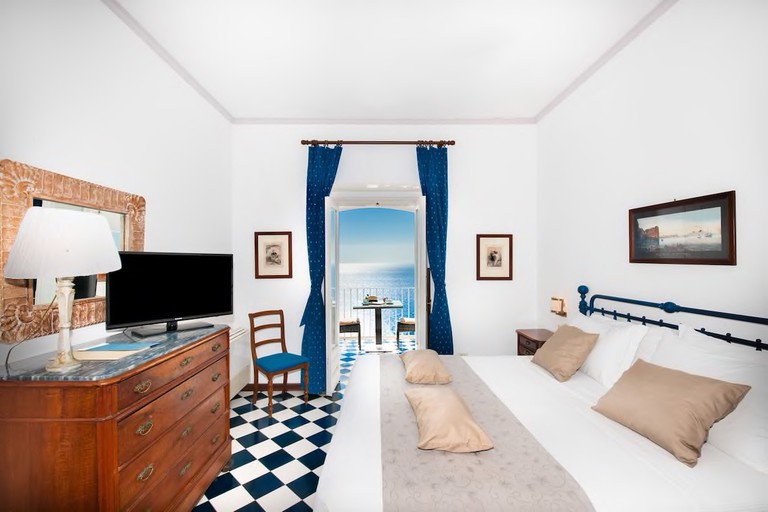 Set on a clifftop in Praiano, Grand Hotel Tritone was constructed by a local couple in the 1950s. It has a winery, a Southern Italian menu at La Cala delle Lampare restaurant and a semi-circular sitting room with a wrap-around terrace. The rooms at this Amalfi Coast hotel, some of which have rock walls, feature terraces overlooking the sea and Vietri ceramics. There’s also a central pool, which is a dream in high summer. A lift and flight of steep zigzag steps lead down to a waterfront terrace with a saltwater pool and loungers. 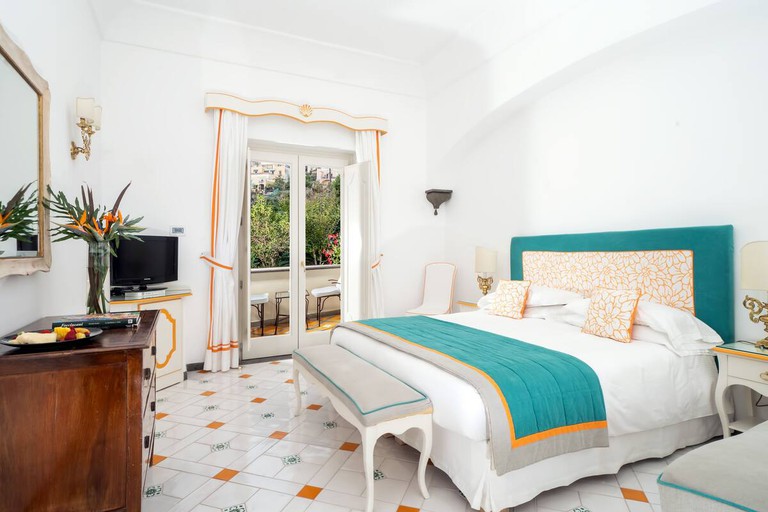 Set in an 18th-century palazzo, once home to the king of Naples, Hotel Palazzo Murat offers a prime location just off Positano’s main street. It’s filled with vaulted ceilings and antiques, while its flower-filled Mediterranean garden has a wrought-iron gateway, a small pool and a courtyard. The airy, individually styled rooms come with exquisite beds and French windows that spill out onto balconies, making this one of the best hotels on the Amalfi Coast. To make the most of a stay here, relax in the spa with a Turkish bath, and have the helpful staff arrange a private boat to explore the coast. 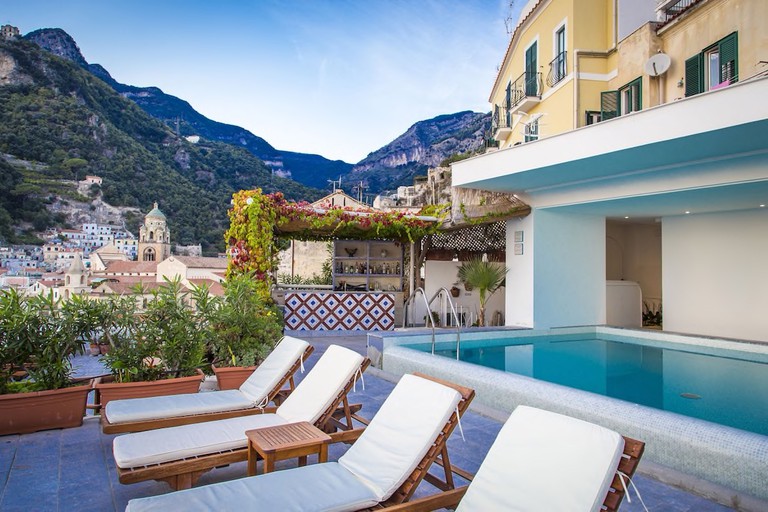 Hotel Marina Riviera –one of the Amalfi Coast’s top hotels – sits inside a 19th-century villa and neighbouring converted houses. Each room has an individual character, with carved wooden headboards, ornate fabrics and marble bathrooms. Gardens are filled with pink bougainvillea, and there’s a large rooftop with a heated pool overlooking the Lattari Mountains and Amalfi. Hotel Marina Riviera also offers a steam room and a bar, and the popular Eolo restaurant lies next door. 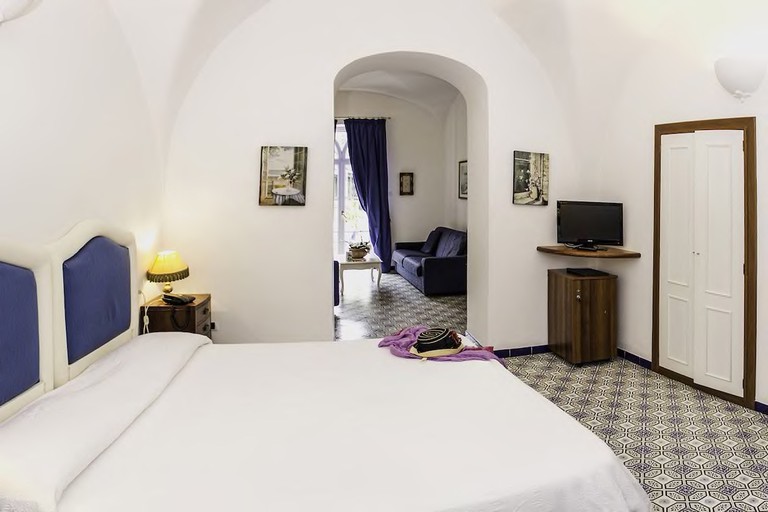 This atmospheric 19th-century villa, on a cliffside in Ravello, has been lovingly restored – yet it retains elaborately carved arches and is brimming with antiques and paintings. The rooms, featuring ceramic tiles and chalk-white walls, offer balconies with hill or pool views, while some even have whirlpool tubs. Don’t miss the chef’s cheesemaking and cooking classes. 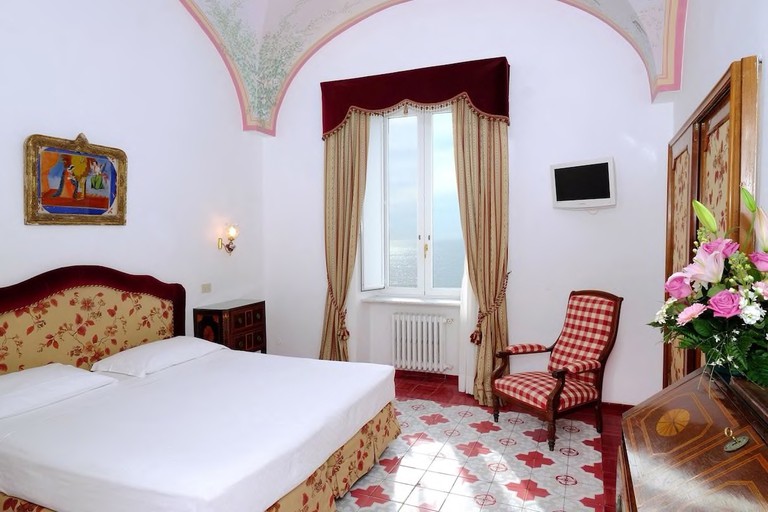 For a slice of history, check into the Hotel Luna Convento on the Amalfi Coast, a former monastery founded by St Francis of Assisi in 1222. Owned by the Barbaro family, it has attracted historical figures such as Wagner and modern celebrities over the decades. Expect Edwardian decor, a cloister bar, high ceilings and oil paintings, as well as a tiled mural of Franciscan monks. Cool off in its saltwater pool that overlooks the sea below, a view that’s also showcased in the grand rooms with ceiling murals. 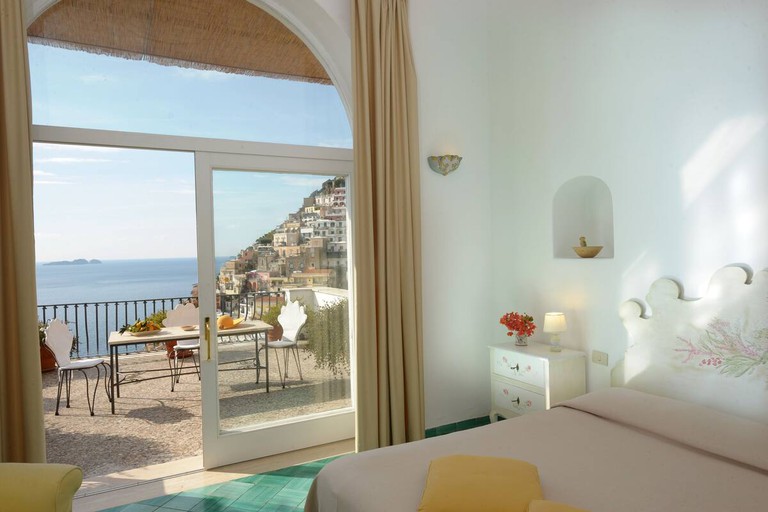 The intimate Villa Rosa, dating back to the 19th century, is built into a cliffside in Positano. There’s a simple charm to its Mediterranean-style whitewashed walls, tall ceilings and cool, colourful floor tiles. Rooms are set over three floors and feature furnished terraces with sea views. There’s no restaurant, but the owners will bring fresh coffee and pastries to your balcony each morning. 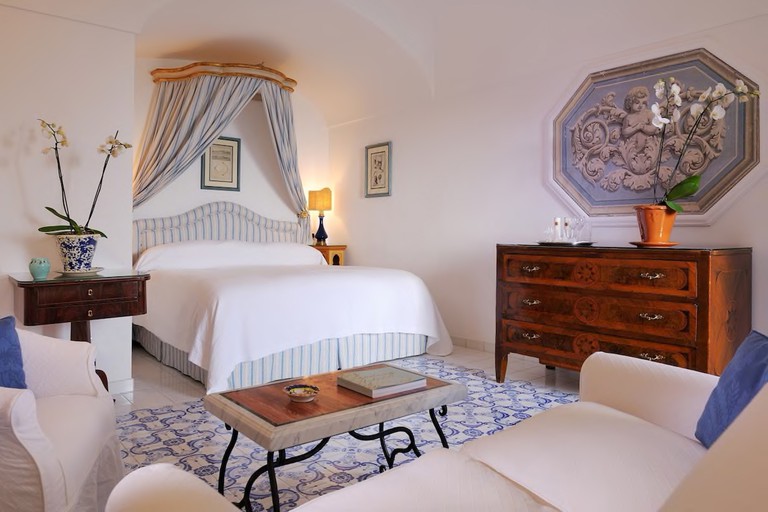 A favourite of writer John Steinbeck, Le Sirenuse is set in a historical villa that’s now extended into neighbouring properties. It’s owned and operated by the aristocratic Sersale family and is renowned for its cliffside views of Positano and the coast. Each room and suite at this Amalfi Coast hotel has a terrace and features handmade tiles and antique furnishings. The hotel also has a restaurant, a bar and Michelin-recommended food at La Sponda. 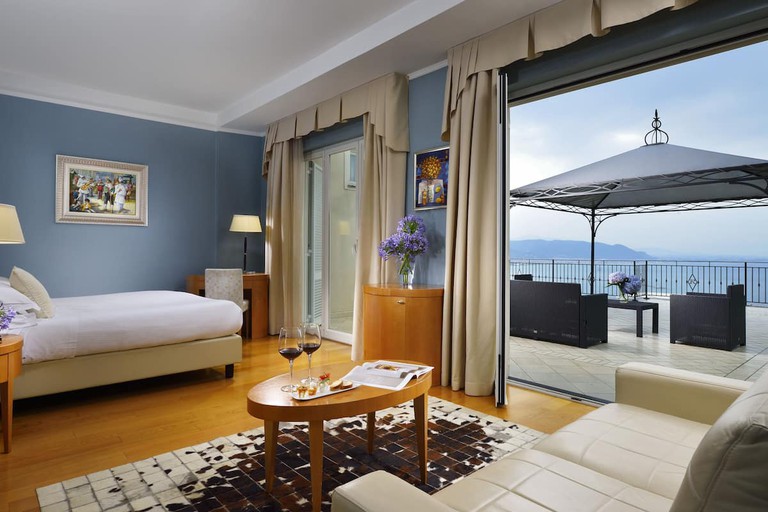 Five-star Hotel Raito is known for its luxurious day spa and prime location in the Raito hills. When you’re not enjoying views of the Gulf of Salerno, relax in one of the many tranquil outdoor areas or by the pool. The hotel also has a lemon grove, a bar and Il Golfo, a restaurant that serves its signature pasta dish with anchovy sauce. Rooms have Vietri flooring, light wood panelling and balconies. 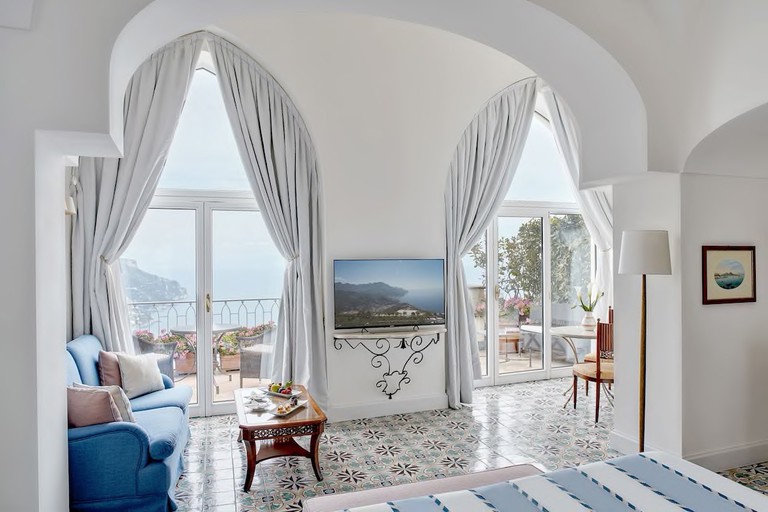 Belmond Hotel Caruso, set in an 11th-century palazzo with marble hallways, frescoes and chandeliers, is known for its infinity pool, which offers never-ending views of the Bay of Salerno. Terraced gardens line the cliff face, while there are several restaurants and bars, each with scenic vistas. Stay in one of the 50 rooms or suites, or opt for the Belmond Villa Margherita, which comes with a garden, butler service and a chef. 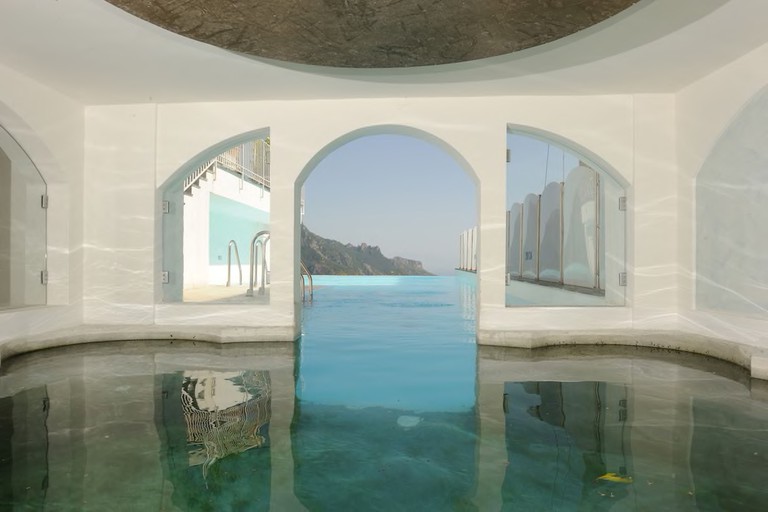 The traditional Hotel Villa Fraulo offers a peaceful stay in the popular Amalfi town of Ravello. Owned and refurbished by the Fraulo family, the hotel boasts a 19th-century stone fireplace in the restaurant, which serves local seafood dishes and an extensive breakfast buffet. Rooms at this hotel on the Amalfi Coast feature marble bathrooms, bright tiles and views of the northeast Amalfi Coast – some even have balconies.