An Art Lover's Guide to Milan in 24 Hours 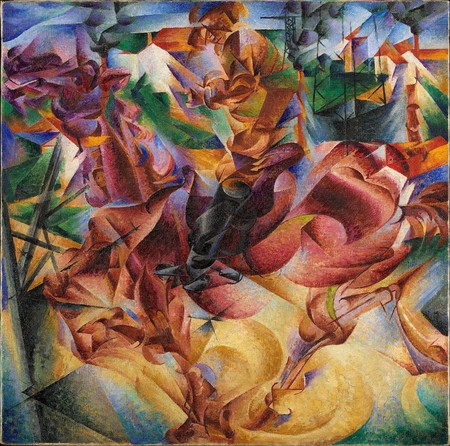 Milan has a rich art history and today, it is an important player in the international contemporary scene. This creative culture is reflected everywhere in the city, from historical sites and museums to new restaurants and street art. Check out our hit list for art lovers with limited time to explore the city.

Museo Novecento houses a remarkable collection of 20th-century Italian art. Over 400 works are displayed chronologically, giving visitors a great introduction to modern Italian art history. It begins in 1902 and travels through Futurism, Novecento, Abstraction, Art Informel, leaders of the 1950s and 1960s, Arte Povera and finishes with Pop Art. The museum also pays tribute to other international avant-garde art movements, so you can view masterpiece works by the likes of Picasso, Paul Klee and Piet Mondrian. The top floor of the museum is dedicated to Lucio Fontana and designed with floor-to-ceiling windows offering unrivalled views of Piazza del Duomo – this is particularly special at night.

Tip: On Saturdays, the museum remains open until 10.30pm – it is incredibly quiet at this time, so you can view the masterpieces virtually undisturbed. Every day, admission is free two hours before closing and every Tuesday from 2pm. 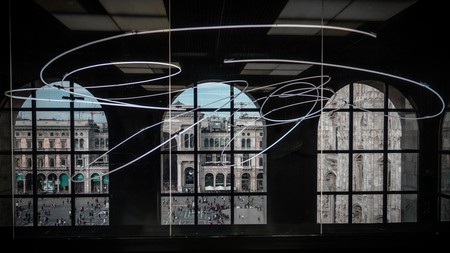 Indulge with fanciful cakes and coffee at Bar Luce on site at Fondazione Prada, and then visit the gallery’s collection or temporary exhibit. The architecture of Fondazione Prada distinguishes it above all other venues to experience modern and contemporary art in the city. Designed by the OMA architecture studio led by Rem Koolhaas, the site marries existing industrial distillery buildings with esoteric new spaces, including a tower clad in gold leaf. Bar Luce is the brilliantly kitsch Milanese-American café designed by film director Wes Anderson – retro diner fittings in saccharine shades of pink, turquoise and yellow combine with surreal details typical of Anderson’s creative flair. Fondazione Prada celebrates leading artists of the 20th and 21st centuries, such as Louise Bourgeois, Dan Flavin and Anish Kapoor, but also champions emerging talent. Expect cerebral, challenging presentations.

The Pinacoteca di Brera is a major public museum housed in a palazzo in the Brera district. It originated as a gallery to host the most important works of art from areas conquered by the French armies. Today, it is a celebrated art collection in Italy, with a special focus on Venetian and Lombard paintings. Many of the works were looted from churches and convents, so it is dominated by religious themes. Over the centuries, the museum has grown its collection to include a strong modern wing, meaning you can enjoy masterpieces from the likes of Bellini, Caravaggio and Tintoretta, but also Boccioni, Modigliani and Severini. Highlights include Raphael’s The Marriage of the Virgin (1504) and Francesco Hayez’s The Kiss (1859).

Tip: Admission is free every first Sunday of the month, but this creates very long queues. The admission is definitely worth it.

2017 marks the 30-year anniversary of Massimo De Carlo, a commercial gallery renowned for bringing big international artists to Milan. It first opened on Via Ventura in 1987 and now has an additional space in Palazzo Belgioioso in the historical centre of the city, as well as in London and Hong Kong. The Palazzo Belgioioso gallery space was designed by Giuseppe Piermarini (who also designed La Scala Theatre) in 1787 – the ornate features create a beautiful environment to view innovative contemporary artwork by the likes of Maurizio Cattelan, Elmgreen & Dragset, Jim Hodges and Laari Upson. The original Via Ventura gallery is a more typical white cube space.

Tip: Before your visit, double-check that there is an exhibition showing, because commercial gallery spaces typically shut for at least two weeks between exhibition hangs. 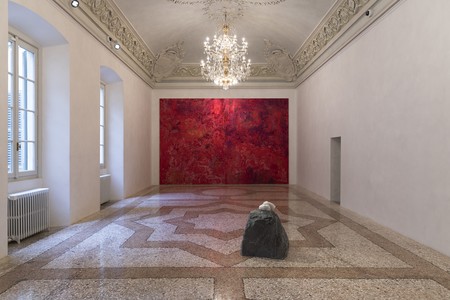 This commercial gallery originated in 1986 as Studio Marconi 17, an experimental space for emerging international artist and critics directed by Gió Marconi. Gió’s father, Giorgio Marconi, had previously founded Studio Marconi, which they ran together between 1965 and 1992. Today, Gió Marconi Gallery continues to champion contemporary artists from around the world (for example, Franz Ackermann, Nathalie Djurberg, Allison Katz) as well as promoting the historical work of the former Studio Marconi programme. It holds an important place in Milan’s contemporary art history and is still one of the best places in in the city see bold, often challenging new art.

Galleria Zero champions young and emerging Italian and Milanese artists, and since opening in 2003, it has built a reputation for experimental exhibitions and cutting edge art.

Tip: The gallery does not have standard opening hours, so double-check before visiting.

Leonardo da Vinci’s The Last Supper is one of the most famous paintings in the world, and the masterpiece is located in the UNESCO world heritage site Chiesa Santa Maria della Grazie, which exemplifies Milanese Renaissance architectural splendour. Understandably, this is a very popular tourist destination, but unfortunately, because of the fragility of the work, visitors are only admitted every 15 minutes with a maximum capacity of 30 people at any given time. So, if this masterpiece is on your bucket list, it is necessary to advance book.

Tip: See The Last Supper before breakfast, and you won’t have to queue at all – book the earliest slot at 8.15am. 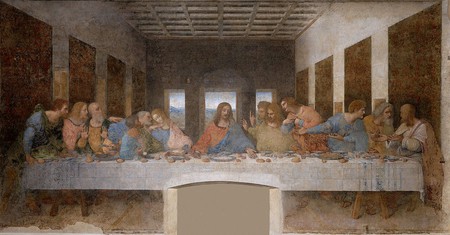 A former working class district of Milan, in recent years Isola has been radically regenerated and is now considered one of the coolest new places to live. Historically, cheap rent drew artists and other creative industries to the area, which is reflected in the character of the neighbourhood, including many graffiti murals. Via Carmagnola and Angelo della Pergola are especially cool, and if you venture as far as the Lambrate area, head for Leoncavallo. There are several companies that offer guided tours of the street art around Isola but if you prefer to explore alone, there is a handy app that suggests the best route: GPSMyCity. 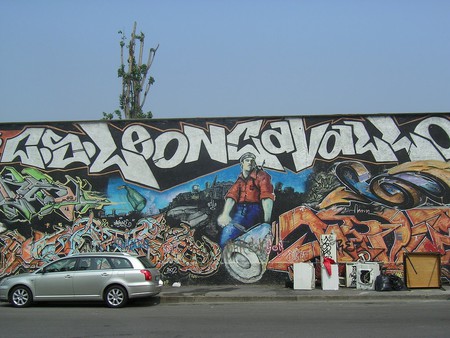 This is one of the oldest pastry shops in Milan, opened in 1817 next to Teatro alla Scala by a soldier of Napoleon’s army, Antonio Cova. It was known as a key meeting place for important political and creative minds – allegedly, patriots of the Risorgimento conspired to organise the Five Days rebellion here, and it was a popular haunt of Italian opera’s finest, Puccini and Verdi. It even appears in two of Ernest Hemingway’s novels. Cova relocated to its current address on Via Montenapoleone in 1950, but its elegance and historic atmosphere remains. Situated in the central Brera neighborhood, this is a decadent place to refuel before or after a visit to Pinacoteca di Brera or Museo Novecento.

Fioraio Bianchi Caffe has no claim to Milan’s artistic heritage, but it is an aesthetically special space – delicate flowers and foliage decorate every corner and surface of the Parisian bistro-style rooms. It serves coffee, lunch and dinner from the central Via Montebello. 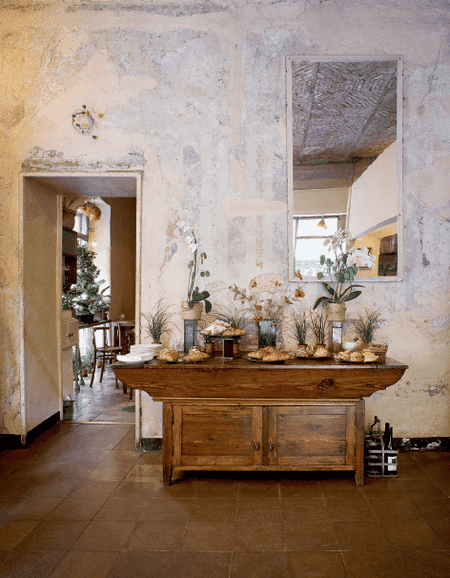 If you fancy a break after your visit to Gió Marconi or Galleria Zero, head to Bar Basso, supposedly where the infamous Negroni was invented and therefore is king of cocktails at aperitivo hour. But, like all Italian bars, it also serves great coffee all day. It first opened in 1947 and has been a lively meeting place for creative characters ever since. Today, it is a favourite with designers in town for the annual Salone di Mobile. The dated interior is exactly as a classic cocktail den should be.

If your trip to Gió Marconi and Galleria Zero falls before lunch or dinner, take a meandering stroll through the Porta Venezia neighbourhood and dine at The Small – a small but perfectly formed bistro with artistic flair. Classic design pieces in loud colours are paired with a wacky, albeit carefully curated, collection of objet d’art. The wall artworks are continually changing as part of the restaurants mini exhibition programme. At The Small, you can enjoy modern Italian cuisine within a menagerie of eccentric art and design excellence.

Tip: Porta Venezia is famous for its many Art Nouveau (‘Stile Liberty’) buildings with ornate stonework. A real gem can be found on Via Malpighi.

LARTE was conceived as space to celebrate excellence in Italian art, design and cuisine, and is located in the historic centre on Via Manzoni in the former house of poet and writer Emilio Gadda. The restaurant, café and shop is exquisitely finished with both old and new Italian design classics, and hung with an impressive collection of artwork. LARTE regularly plays host to external collections so the display is ever-changing. For example, a presentation from Studio Giangaleazzo Visconti which represents Conceptual Italian artists and artists of the Arte Povera Movement, such as Lucio Fontana, Alberto Burri, Piero Manzoni and Alighiero Boetti. The menu is carefully curated, just like the space.

This informal bar/restaurant takes its name from the 1913 Florentine Futurist magazine, and the decor pays homage to Italy’s 20th-century art scene at large. Vintage Campari advertisements hang next to Boccioni-esque paintings. Period features, industrial fittings and eccentric maximalist design details make for a great late-night atmosphere. Menu-wise, it specialises in cocktails and seafood. Located in the Porta Romana neighbourhood, this would be a good stop on your way back from Fondazione Prada.