A Brief History of the Florence Cathedral 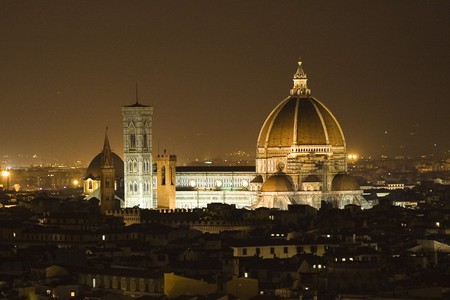 The Cathedral of Santa Maria del Fiore, completed in 1434, is the most important landmark in Florence, as well as being the fourth largest church in the world. The cathedral complex, including the Baptistery and Giotto’s Campanile, is part of a UNESCO World Heritage Site covering the historic centre of Florence. The church as we see it today is the end result of years of works, and the history of its magnificent architecture is fascinating.

The Cathedral was designed by Arnolfo di Cambio who enlarged the existing religious structure. Finished around 1367, the Cathedral was completely covered by colored marbles (white, green, pink) like the earlier Baptistery, except for the façade that remained unfinished and was completed only in the 19th century.

Although the entire church is a piece of art, the most famous architectural feature is the cupola, or the dome. The initial project left the dome unfinished – in 1421 only the polygonal base had been erected. What we see today was created by the genius of the Renaissance, the architect Filippo Brunelleschi, who showed a great mastery of technical knowledge. In 1418 the Opera del Duomo announced a public competition for the construction of the dome with a prize of 200 gold florins for the winner. Leading architects of the time flocked to Florence to present their ideas, but the winners were Filippo Brunelleschi and Lorenzo Ghiberti. After many mathematical calculations, Brunelleschi decided to build a dome with a slight point, rather than a smooth, round top. To make his work he invented and created a lot of new tools, including certain kinds of cranes.

The church is finely decorated but many structural and decorative interventions to the exterior and interior were added during years, such as the two sacristies in the 16th century, and sculptures and frescoes signed by great artists such as Paolo Uccello, Andrea del Castagno, Giorgio Vasari and Federico Zuccari. 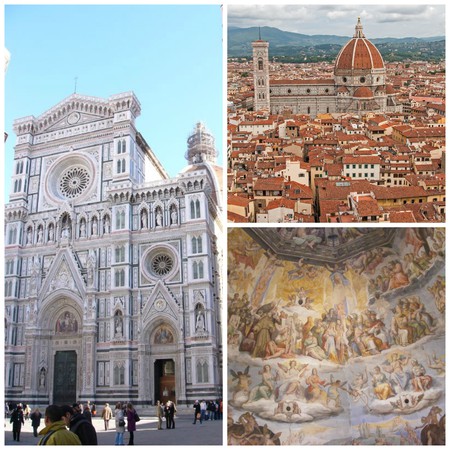 The Giotto’s bell tower offers, together with the huge dome, one of the most striking views of Florence. The famous Tuscan painter, Giotto, was the architect who designed the bell tower, although by the time of his death only the lower part was completed. The works continued under the direction of Andrea Pisano and then Francesco Talenti, who completed the project.