The Best Italian Castles You Can Actually Stay In 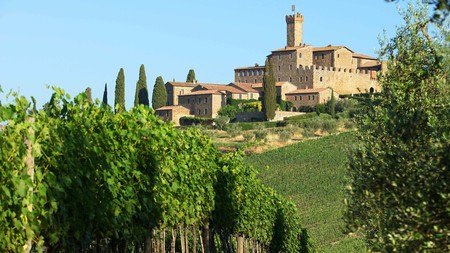 From lakeside to hilltop, you can feel like royalty on your holiday with a stay in one of Italy's castles | Courtesy of Castello Banfi / Expedia

The next best thing to buying your own castle is spending the night in one – whether it’s in Sicily, Venice or Lake Como. From a medieval fortress in Tuscan vineyards to a former royal palace overlooking Mount Etna, these are Italy’s best castles to spend the night.

One of the most enjoyable ways to soak up Italy’s culture is to stay in its historic castle-hotels. Set in vast expanses of gardens, olive groves and vineyards, these storied properties are hundreds of years old, and instantly take you back to a time of louche elegance and refined hedonism. Here, we’ve brought together the best Italian castles you can actually book, including former royal residences, medieval hamlets transformed into luxury resorts, and country retreats surrounded by renowned vineyards. 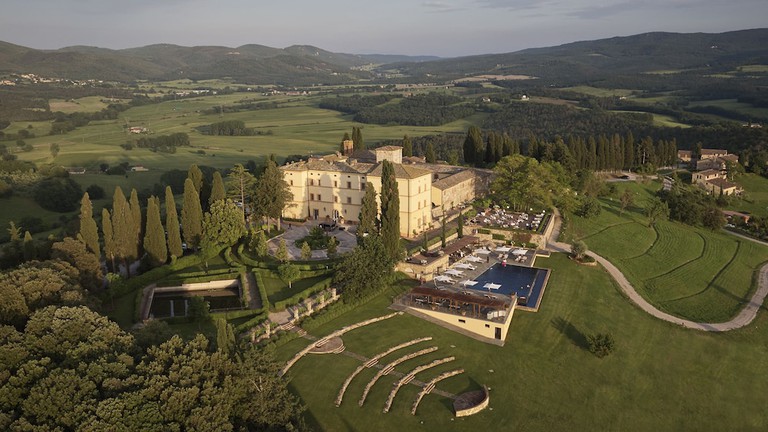 Courtesy of Belmond Castello di Casole / Expedia
View Rooms
Price Drop
Now from $774 per night
This impeccably restored 10th-century castle is set deep in the Tuscan countryside, an hour’s drive south of Florence. The site itself dates from the Bronze Age and comprises a game reserve with populations of hare, pheasant and deer, as well as a 25-acre (10ha) organic vineyard and 30-acre (12ha) olive grove. Sample Belmond’s private-label Si di Si wine along with Tuscan cuisine at the castle’s elegant restaurant, or with canapés at the Enchanted Table, an other-wordly spot in the surrounding forest.
More info 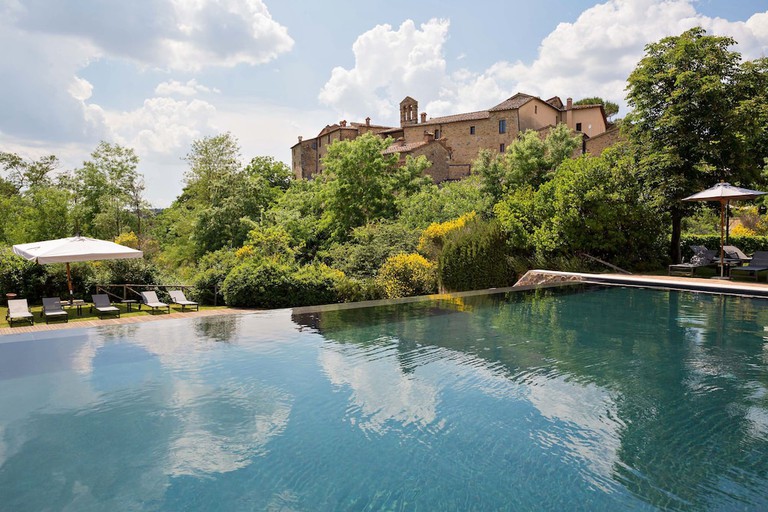 Courtesy of Castel Monastero / Expedia
View Rooms
Price Drop
Now from $528 per night
This rural resort consists of an entire medieval hamlet, complete with its own piazza and church. Situated 27 kilometres (17 miles) east of Siena, the village’s main building served as a monastery in the 11th century, before becoming the country seat of a wealthy Sienese family in the 13th century. Rooms and suites overlook Chianti vineyards and chestnut forests, and showcase original features such as wooden beams, antique furniture and terracotta floors. Modern add-ons include an outdoor pool, a spa and two restaurants.
More info 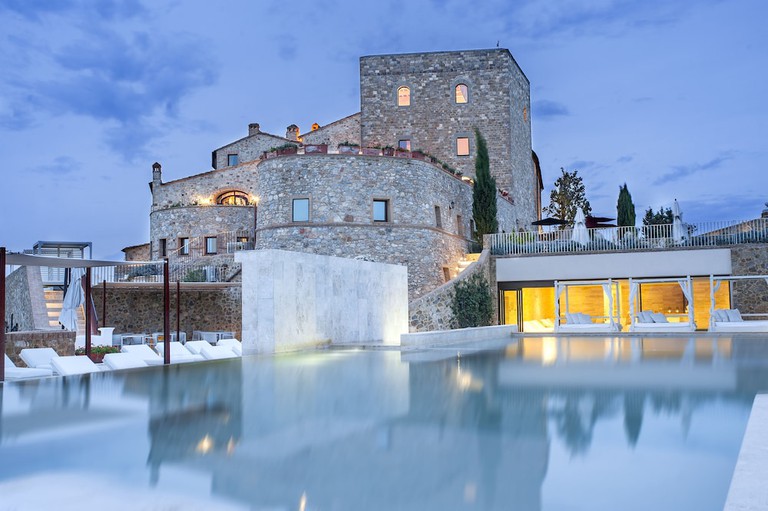 Courtesy of Castello di Velona Resort / Expedia
View Rooms
Price Drop
Now from $602 per night
Open your windows onto one of the world’s finest wine-producing valleys at the Castello di Velona, a thermal resort in the Val d’Orcia, home to the prestigious Brunello di Montalcino varieties. Two types of accommodation are available in a restored 11th-century fortress: Monumental Rooms, rendered in traditional Tuscan castle-style; and the contemporary Unesco View Rooms. Natural thermal water runs from the taps and the sunset can be enjoyed from private terraces. Take away a bottle or two of the hotel’s own wine, considered one of the best in the area.
More info 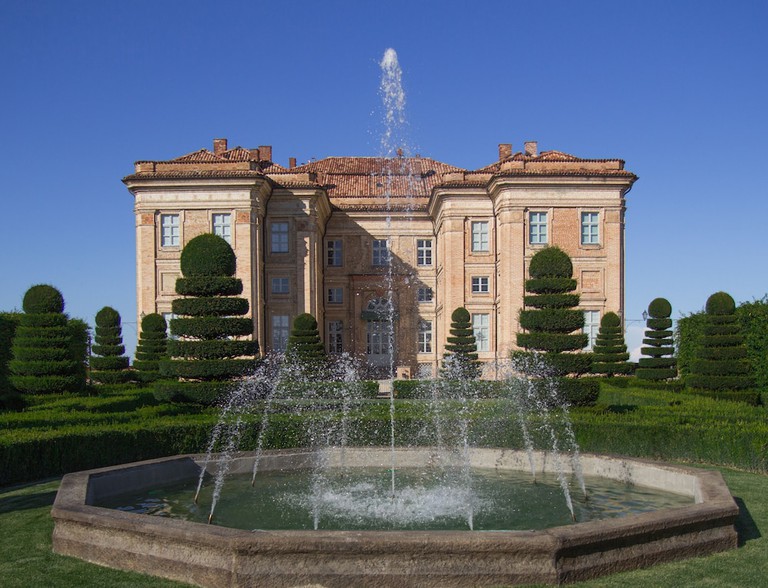 Courtesy of Castello di Guarene / Expedia
View Rooms
Price Drop
Now from $422 per night
Italian royalty once holidayed at this Renaissance castle in Guarene, just an hour from Turin. Built by amateur architect Carlo Giacinto Roero in the 18th century, its entrance hall and 15 bedrooms are a historical attraction in their own right, featuring a display of traditional womens’ attire from the 17th and 18th centuries. Guest rooms and suites are just as grand, and look out over the Unesco-protected landscapes of the Langhe, the gardens or the Alps.
More info 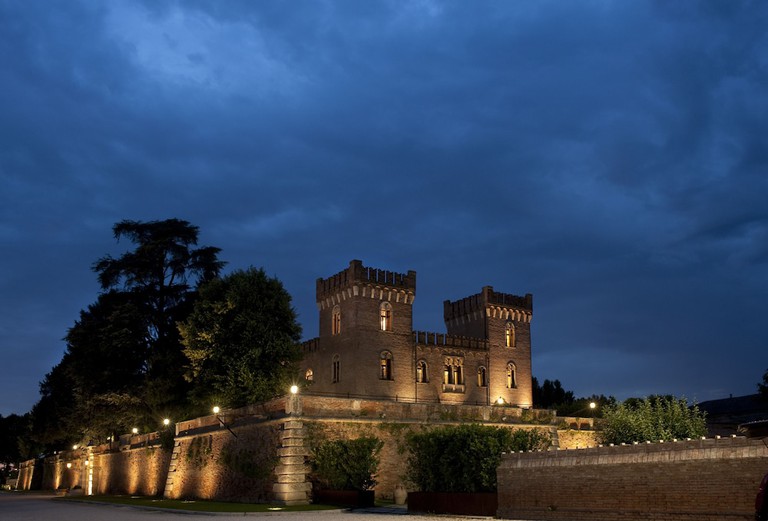 Courtesy of Relais Castello Bevilacqua / Expedia
View Rooms
Price Drop
Now from $172 per night
The 13th-century Relais Castello Bevilacqua is one of the most storied castles in this list: originally a defensive fortress, it underwent significant restorations in the 16th and 18th centuries, served as a German command post during World War II and afterwards as a Salesian college. Restored by the Cerato family in the early 1990s, it now offers opulent period accommodations, hanging gardens and a restaurant specialising in Venetian cuisine.
More info 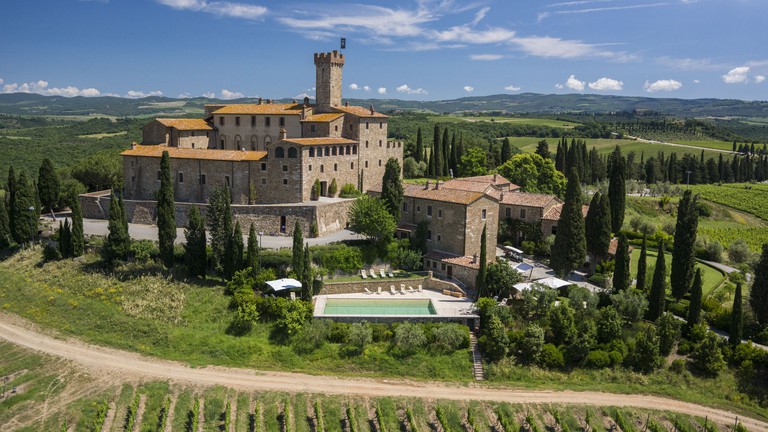 Courtesy of Castello Banfi / Expedia
The task of reimagining this medieval hamlet was entrusted to legendary Neopolitan designer Federico Forquet in the 1960s. Located an hour’s drive south of Siena, it’s surrounded by the award-winning vineyards of the Mariana family (producers of the Banfi brand), which you can explore on guided horseback tours. Sample the celebrated final product during tasting sessions in the historic cellars, or paired with Tuscan cuisine at on-site restaurant La Sala dei Grappoli. You’ll also have access to an 18-hole golf course. 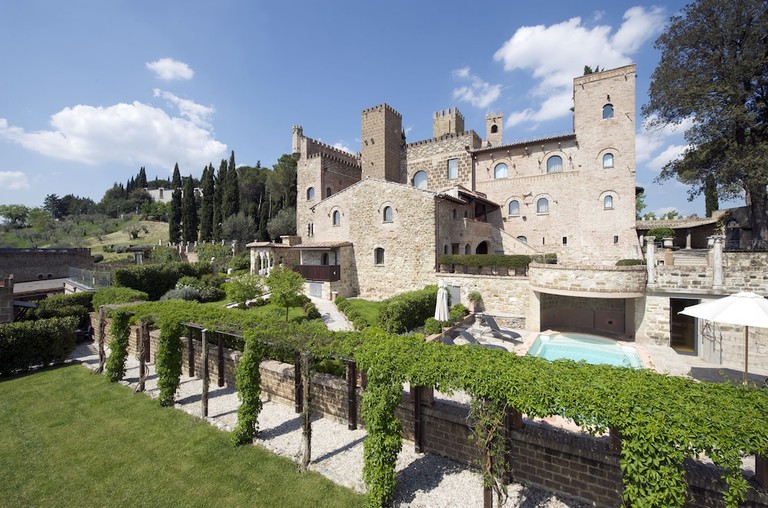 Courtesy of Castello di Monterone / Expedia
View Rooms
Price Drop
Now from $151 per night
Situated in the Umbrian countryside, 3km (1.8 miles) outside Perugia, the Castello di Monterone dates at least from the 11th century. There are 18 rooms in which minimalist decor highlights the property’s medieval charm, with beds and furniture handmade by specialist wood and iron artisans. For an immersive experience, book the Camera del Drago, a room with an original tile portraying a dragon. Overlooking the castle’s 13th-century well, it’s said to be the resident ghost’s favourite spot.
More info 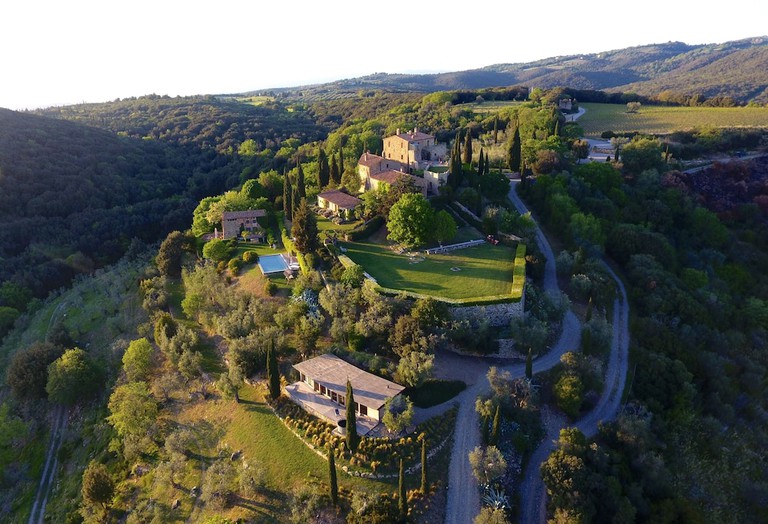 Courtesy of Castello di Vicarello / Expedia
View Rooms
Price Drop
Now from $605 per night
Built over 900 years ago by the Republic of Siena, the Castello di Vicarello is set in 100 acres (40ha) of olive groves, farmland and vineyards. Each room has a unique feature, from panoramic views in the Suite Torre to a hot tub fashioned out of a huge wine barrel in the Spa Suite. Breakfast shows off ingredients from the estate’s gardens, bees and hens, while candlelit dinners are served on a terrace overlooking Tuscany’s Maremma countryside.
More info 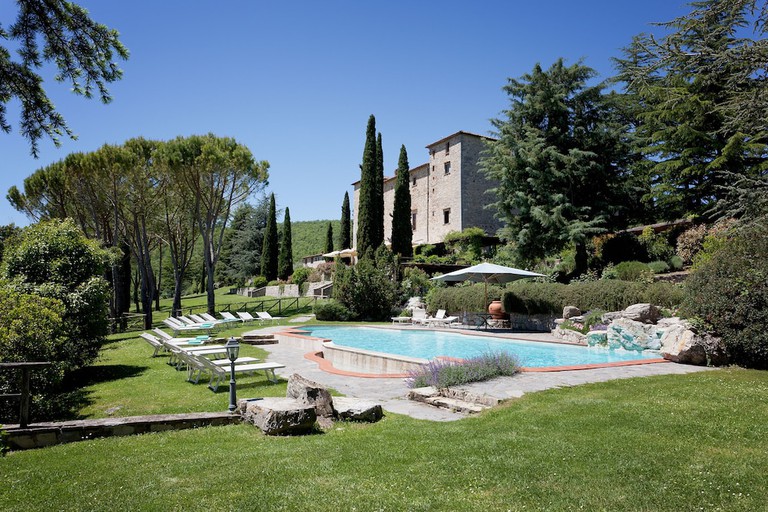 Courtesy of Castello di Spaltenna / Expedia
View Rooms
Price Drop
Now from $298 per night
Accommodations at Castello di Spaltenna are in rooms and suites in the castle itself, two private villas, and the self-catering Spa apartments, located a five-minute walk away in the walled medieval village of Vertine. All feature classic touches such as handmade Tuscan furniture, wrought iron or four-poster beds and richly embroidered fabrics. Explore the vineyards and medieval villages of the Chianti region. Dine at Il Pievano, the Michelin-starred in-house restaurant where over 500 varieties of wine are available.
More info 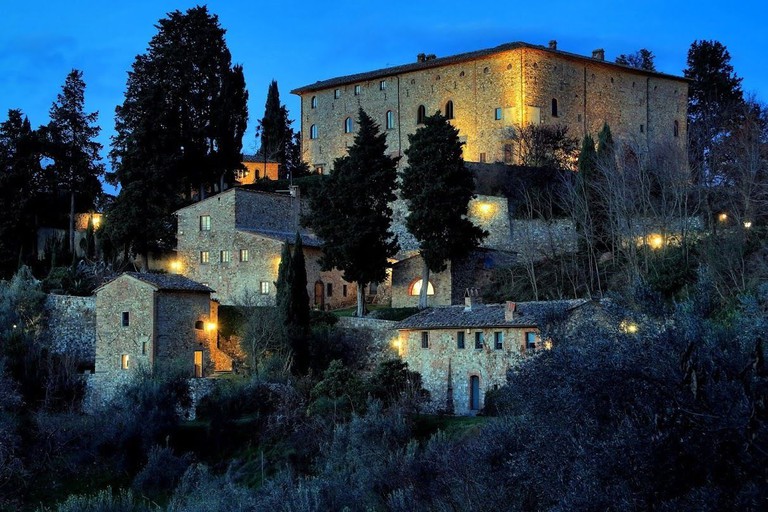 Courtesy of Il Castello di Bibbione / Expedia
Situated in the heart of the Chianti region, this 9th-century castle was originally owned by the Machiavelli family. Tours of the property are followed by tastings, allowing you to sample Bibbione’s olive oil and Merlot and Sangiovese wines. Accommodation is provided by self-catered one- or two-bedroom apartments, some featuring antique fireplaces, or the Il Poggio villa, which sleeps up to twelve and has its own garden and pool. All guests have access to an infinity pool with Chianti views. 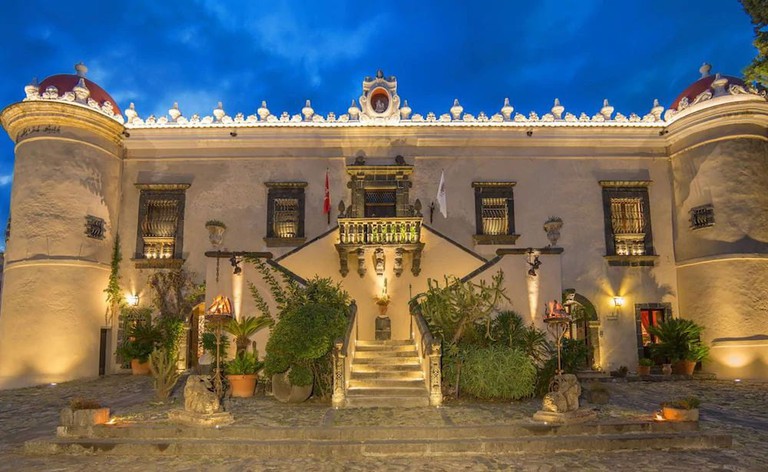 Courtesy of Castello San Marco Charming Hotel & Spa / Expedia
View Rooms
Price Drop
Now from $205 per night
Sicily’s Castello San Marco was built at the end of the 17th century for the Prince of Palagonia, and amazingly survived the earthquake of 1693, the biggest in recorded Italian history. It’s situated practically on the slopes of Mount Etna. The building houses rooms and suites that could sleep a pampered prince, set in fragrant gardens of lemon, orange and olive trees. On-site amenities include a pool, an illuminated tennis court and a Sicilian restaurant.
More info 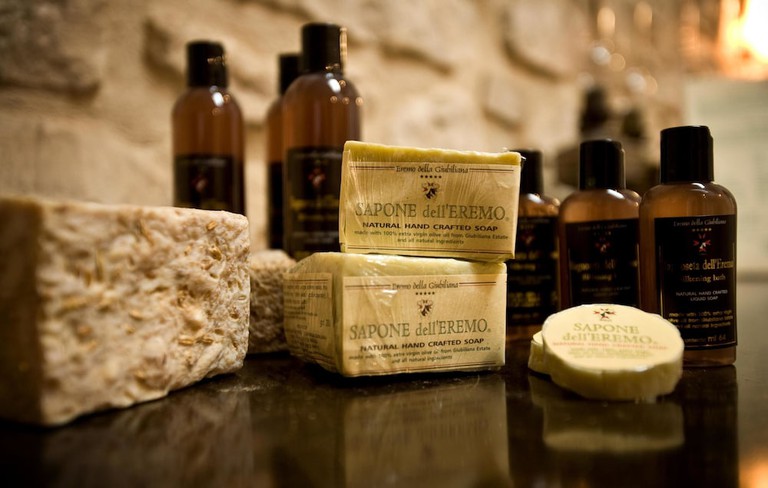 Courtesy of Eremo della Giubiliana / Expedia
View Rooms
Price Drop
Now from $204 per night
Luxury is the name of the game here. This stone estate dates back to the 12th century. It served as a convent, a monk’s cell and a country home, so it’s part of Sicily‘s fantastically mixed history. Quaint cottages are dotted between lemon groves, each with a private garden, fireplace and period furnishings. The hotel’s private beach is a slice of Mediterranean paradise. You’ll also get a taste of the island through the traditional Sicilian dishes, prepared with the organic fruits and vegetables produced right on the grounds.
More info 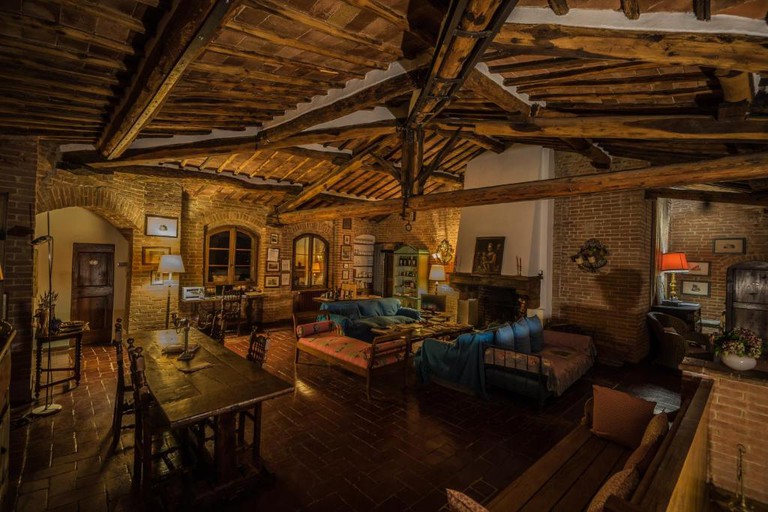 This beautiful four-towered castle in Tuscany is just a 15-minute drive from Siena and an hour from Florence. The place has been carefully restored to keep intact the beautiful brickwork, the high ceilings and terracotta flooring. There’s a welcoming, intimate atmosphere, and the staff are very helpful booking tours or day trips around the area. Make sure you book a table at the nearby farmhouse restaurant owned by the same family. 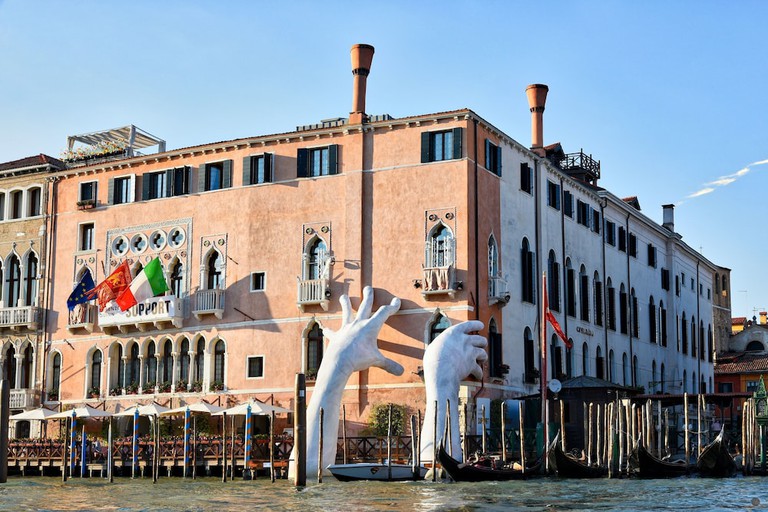 Courtesy of Ca’Sagredo / Hotels.com
View Rooms
Price Drop
Now from $289 per night
You’ll feel like Venetian aristocracy when you arrive at this hotel by boat via the Grand Canal entrance. It was built during the 15th century as a nobleman’s house, during Venice’s wealthy empire era. Wander up the grandiose marble staircase into your magnificently furnished period suite. Art lovers will delight in discovering hidden masterpieces, and food lovers will be charmed by the restaurant, which serves up Venetian cuisine at its most refined.
More info 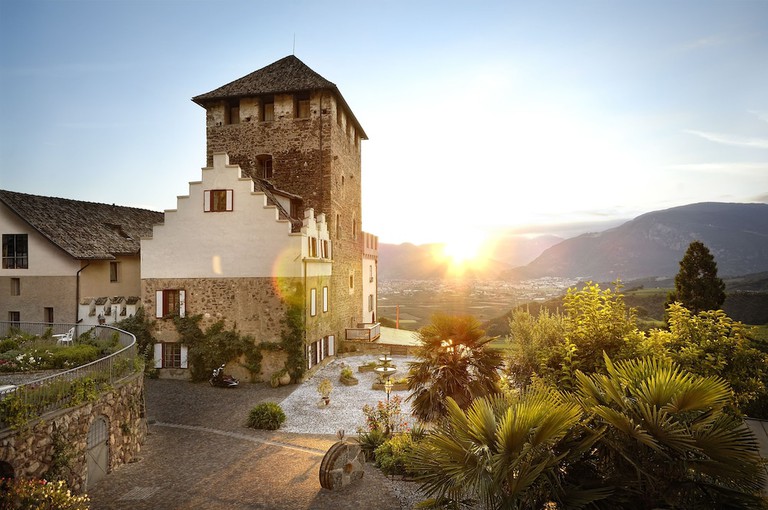 In the northern region of the Südtirol, there’s a distinct culture that’s kind of a mix between Italian and Austro-Hungarian. This castle is a Tyrolese dream nestled in a pristine landscape. You’ll have views of the jagged peaks of the Dolomites and the little towns below. The hills around the castle are covered with vineyards, and the owners produce their own wine here, so be sure to pay the wine bunker a visit. 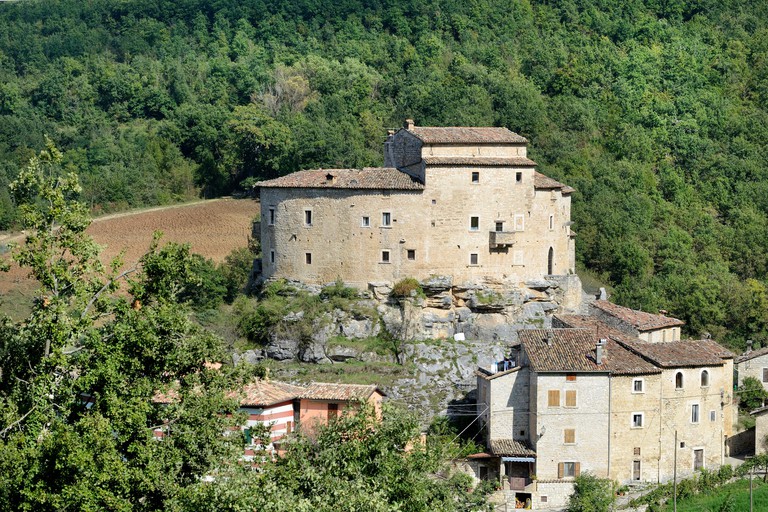 Courtesy of MARKA / Alamy Stock Photo
Immersed in the lush forests of the Marche region, Castel di Luco is a beautiful round castle that looks just right nestled in its rural setting. It’s owned and operated by the Amici family. They’ve lived here for about two centuries, so they’re truly part of the history of the place. Prices are on the affordable side of castle-living too. Lodgings are full of genuine medieval charm, located in an original 15th-century hamlet, just below the structure. The castle itself also has a restaurant, up a rock staircase, that serves local specialities. 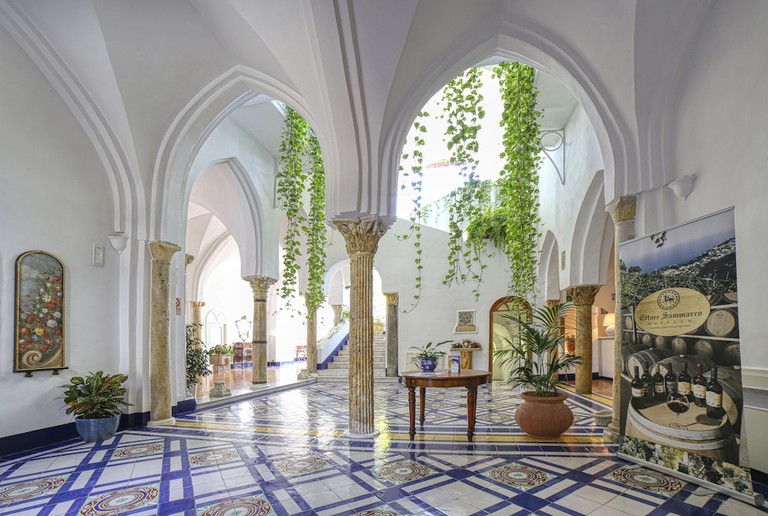 Courtesy of Palazzo Confalone / Expedia
View Rooms
Price Drop
Now from $380 per night
With marble arcades and warm-coloured walls covered in flowers, this is a slice of paradise on the Amalfi Coast. Each room is well appointed, with names instead of numbers, and the building’s architecture nods towards North African design. When weather permits, the castle also maintains a private beach villa. The hotel produces its own wine under the Episcopio label, so you’ll have plenty of reason to conduct thorough tastings during your stay.
More info 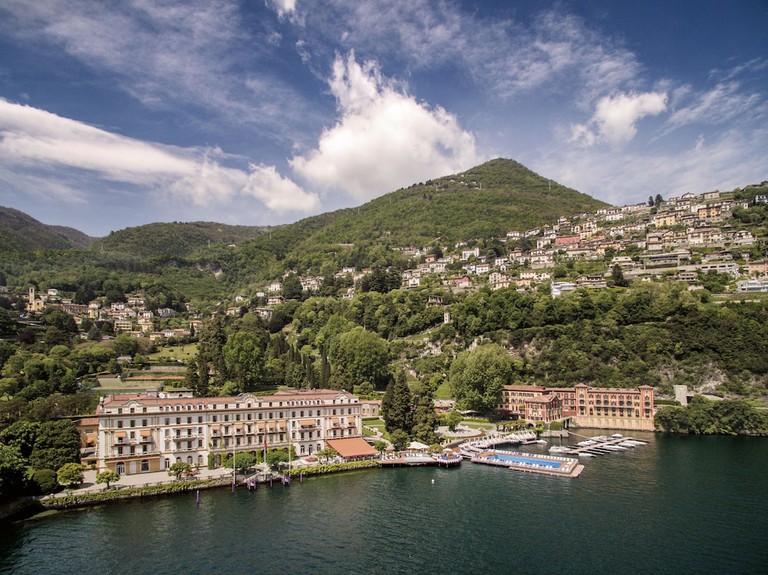 Courtesy of imageBROKER / Alamy Stock Photo
View Rooms
Generations of the wealthy and fabulous have spent their leisure time here in this legendary villa, right on the shore of Lake Como. It’s decked out in all the accoutrements of a fancy period home: frescoed ceilings, grand marble staircase, priceless antiques and a five-acre garden that will give Versailles a run for its money. Lake activities and excursions in the region can be arranged, plus you can lounge by the pool, sip cocktails in the bar or enjoy the spa.
More info 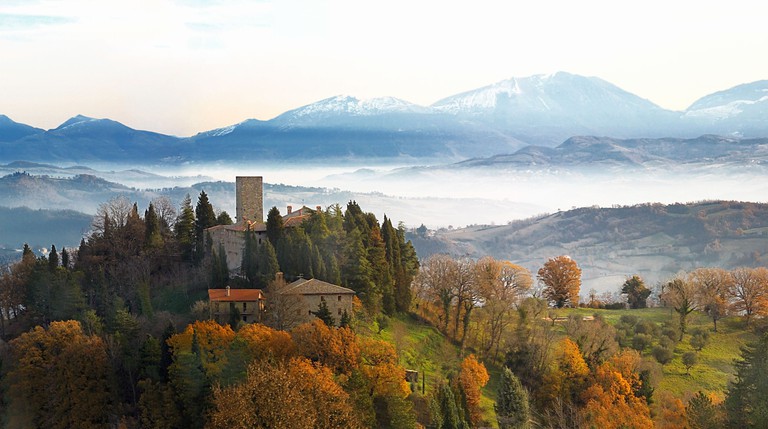 Courtesy of Castello di Petroia / Expedia
Book Now
This beautiful fortress set in the Umbrian countryside is surrounded by a forest with winding footpaths and olive groves, perfect for exploring. Take a dip in the outdoor pool or head back to your own private in-room whirlpools (if you’re lucky enough to have one). The hotel offers activities like truffle hunting and horseback riding. It’s a medieval daydream, especially when the castle’s quirky owner, Carlo Sagrini, sits down to dine with you and tell stories of the castle’s past.