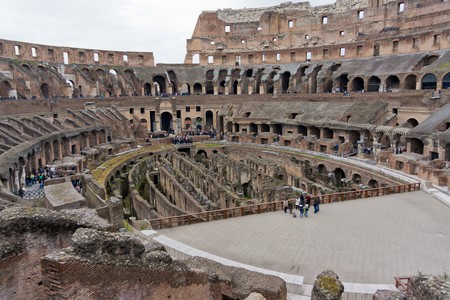 Greek and Roman ruins, medieval villages, Renaissance splendor, modern industry and postmodern life coexist beautifully in the Italy of today. There’s something here for everyone, from fans of ancient history to Renaissance art lovers to foodies and adventurers. If you’re thinking about taking a tour of Italy, check out our guide to some spots around the country that are rich with cultural history and beauty.

Nearly two thousand years ago, this enormous amphitheater held between 50,000 and 80,000 spectators who gathered for the most fantastic entertainment that the empire could produce. They came to see circus acts, parades and music, but above all they came for blood sports. They would watch fierce animals being hunted by archers, condemned prisoners being hunted by wild animals or trained gladiators fighting one another to the death. The savage spectacles are gone, but the building remains — the cruel and bloody heart of an enormously powerful empire.

This cathedral in the center of Venice steals (quite literally) from Byzantine art and architecture. When the ancient Venetians plundered Constantinople, they took many of the most beautiful pieces from the city, and brought it back to make this gorgeous magpie’s nest of a church. Glittering with golden mosaics inside and porphyry marble on the outside, St. Mark’s Basilica is a real gem.

A post shared by Universal Exports (@universalexportslimited) on Nov 28, 2016 at 2:40pm PST

In Sicily, you’ll find this gorgeous Grecian ruin that stands on a hill just outside the city of Agrigento. The remains of seven temples dating back to 450 BC are scattered across the largest archaeological site in the world.

The residents of this Roman town were taken by surprise by a catastrophic eruption of Mount Vesuvius, and the whole city was perfectly preserved in ash. This slice of ancient history is open now to touristic visits.

This tiny church is entirely decorated by Giotto, completed in the early 12th century. The most marvelous blue color you’ll ever see sits next to delicate and powerful paintings. It’s an intimate and immersive space, and you’ll feel transported to another time and century, when seeing something rendered was a precious and powerful thing.

This delightful museum is devoted to local art history, with a big collection of works by sensitive and reclusive Bolognese painter Giorgio Morandi. You’ll get a look at modern Bologna, a fascinating city full of political and creative simmering.

This incredible biannual food fair brings cheese producers from all over the world, to the small town of Bra, where the Slow Food Movement was founded. Exhibitors from all over Europe bring their particular varieties of cheese. Events, workshops and dinners will not only delight the taste buds but also educate on how good food gets made. This year’s festival will be held in September.

Ancient Fiore Sardo was the cheese of Sardinian shepherds before industry stepped in with pecorino romano. #Cheese2017 #cheeseturns20 #rawmilk

The haunt of literary geniuses like James Joyce and Umberto Saba, this gorgeous cafe serves up perfect coffees and cocktails with a side of intellectual history.

The floating city is built on over 100 different islands connected by bridges, but the best way to experience the city is by boat, because that’s how the Venetians navigated their city for centuries. The gondola in particular is made to go through the narrowest canals and lowest bridges.

The three stunning sculptures by Bernini alone make this museum worth a visit. This magician of marble transforms the stone into soft, supple flesh. Nobody before or since has done the same.

The gorgeous Northern Italian lake has inspired all kinds of travellers over the centuries, and you’ll find all of the towns along its borders charming and peaceful. Check out Bardolino, where the rolling hills are covered with vineyards that produce the eponymous red wine.

Here in Naples, the birthplace of pizza, you’ll find this beloved dish served everywhere. The best restaurants will be both informal and inexpensive, serving up hot pies to long lines of locals. 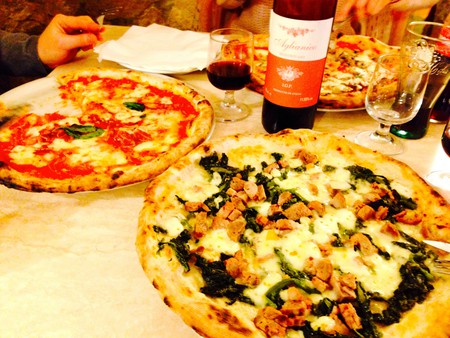 Huge, muscular forms writhing their way across the ceiling and climbing up the altar walls will mirror the sea of humanity that will no doubt accompany you into the chapel. Though the crowds can be hard to navigate on the tourist route inside the Vatican, this classic of world art is certainly worth a visit.

This unspoiled coastline of rocks and coves opens up onto the perfectly clear, turquoise Mediterranean Sea. While part of the coast are private beaches attached to jetsetters’ villas, the lovely Spiaggia del Principe is open to the public.

The dancing, curly headed blondes of Botticelli, the mischievous boys of Caravaggio and the voluptuous maidens of Titian all live here, at the Uffizi. Don’t leave Florence without spending an afternoon here.

This gorgeous royal chapel in Palermo mixes influences from Byzantine, Arabic and Norman architecture for a richly decorative visual feast. For example, you’ll find on the ceiling the eight-pointed stars typical of Muslim design arranged to form a Christian cross. If anyone tries you tell you about the eternal dichotomy of East and West, show them a photo of this beauty.

These gorgeous mountains in northeast Italy are incredible spots for skiing, hiking, camping or just relaxing. Any little town in the zone is sure to be lovely, but try Cortina for a more luxurious ski resort feel, or a place like Campitello for a spot of down-to-earth village life.

San Valentino is a little village with a chiesetta of the same name. It's just one of an almost infinite number of picturesque spots in the region. San Valentino, Sudtyrol, Italy

Rugged landscapes and cliff-side beaches play host to a super-chic crowd, who come for the upscale shopping and fancy restaurants. A great place for a summer swim.