Natural Wonders In Italy That Will Take Your Breath Away 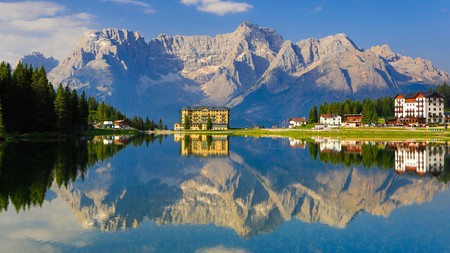 An arresting view of the Dolomites from Antorno Lake in the Cadore region of Italy. | © Prisma by Dukas Presseagentur GmbH / Alamy Stock Photo

With some of the world’s most mesmerizing sceneries and landscapes spread across its numerous regions and territories, from Sicily to Sardinia, and from Calabria to Tuscany, Italy is filled with natural wonders that will leave you speechless, as our Culture Trip guide reveals.

In Italy, ancient ruins, cliffside villages and rolling vineyards are perfectly integrated into their natural environments, making the country an alluring destination for visitors who appreciate the arts and culture along with scenic landscapes. Take a journey through il bel paese from north to south through its most beautiful natural sights.

If you’re looking to make a full trip out of it, why not check out our favourite hotels and apartments to stay at in Italy, all bookable with Culture Trip?

Italy’s fabled Cinque Terre, or five villages, is one of the most iconic scenes in the country. These cliffside fishing towns in the country’s northwestern Liguria region – Riomaggiore, Manarola, Corniglia, Vernazza and Monterosso al Mare – each espouse their own unique histories and charm. Although they are each stunning in their own way, Vernazza is often touted as the loveliest town for its quaint and photogenic harbour. 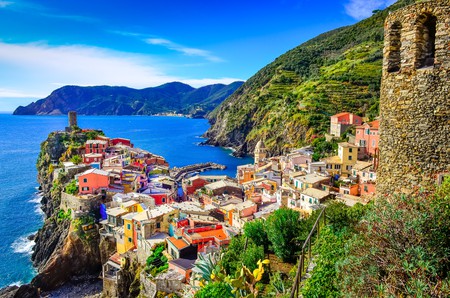 Scenic view of the colourful village Vernazza, one of the famed Cinque Terre of Italy | © Martin Molcan / Alamy Stock Photo

Scala dei Turchi, or “Stair of the Turks”, is a tiered rocky white cliff in southern Sicily. Made up of soft limestone rock and white marl, this stretch of coastline has withstood millennia of lapping ocean waves and salty breezes that have created the remarkable natural terraces that give the formation its name. It is also named for Turkish pirates that invaded Sicily numerous times over the centuries. 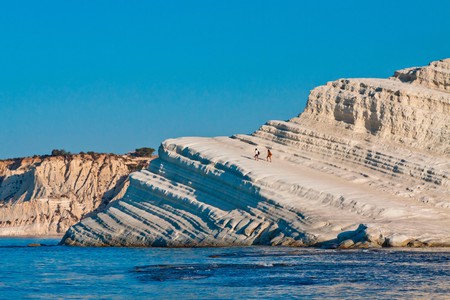 Italy is not only blessed with beautiful beaches, snowy mountain peaks, fresh water lakes and verdant valleys; the country is also replete with thermal baths and hot springs. As the saying goes, Some like it hot, and the most famous and loveliest thermal springs are found in Tuscany’s southern Maremma region. The terme di Saturnia, also referred to as the cascate del mulino, or waterfalls of the mill, contain warm sulphurous waters that spills over into a series of tiered pools for a truly magical effect. 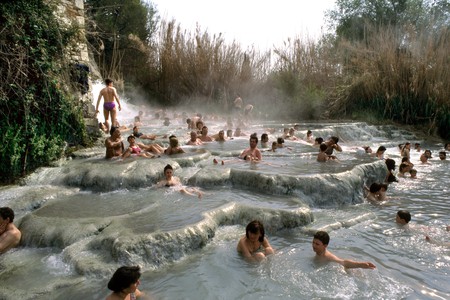 In northern Sardinia, the Maddalena Archipelago is a series of islands and islets that boast some of the Italy’s most heavenly beaches. With windswept, rugged coastlines made of rose-tinted granite, pristine beaches and translucent turquoise water, the archipelago feels like heaven on earth and has retained much of its natural beauty. It is best visited by boat, which will allow you to reach the archipelago’s tiniest coves and beaches. 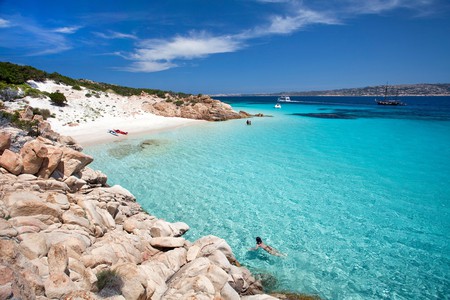 Castelluccio, a small village nestled with the Apennine Mountains in central Italy, is best known for its fiorita, or flowering, that takes place in its fields each spring. Thousands of colourful flowers create a patchwork pattern on the plateau and feature lentils, poppies, violets, narcissus, daisies, clovers and more, making it one of the most stunning springtime landscapes in Italy. 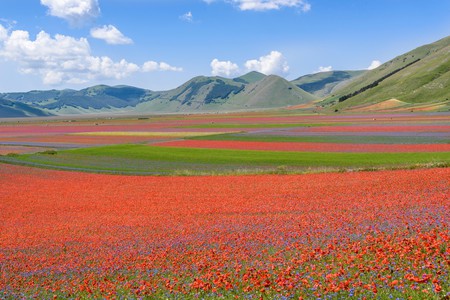 The Amalfi Coast remains one of Italy’s leading attractions – and for good reason: the impressive coastline is dotted with quaint towns and hillside villages that offer unparalleled views of the Tyrrhenian sea below. The Amalfi Coast has 13 municipalities in total, with Positano, Amalfi and Ravello being the most famous, and is well-known for its beaches, walking trails and dolce vita lifestyle. 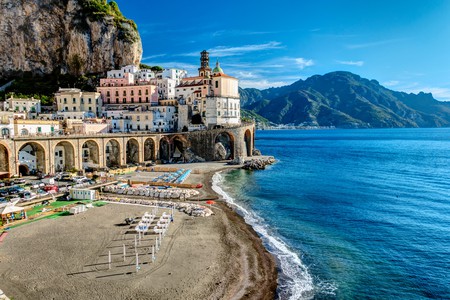 Piedmont’s hilly Langhe region is among Italy’s most praised gastronomic regions: the Langhe hills are famous for full-bodied red wines, flavourful cheeses and fragrant truffles, as well as their natural beauty. The birthplace of Barolo, Barbaresco and Nebbiolo wines, you’ll want to raise a glass to its rolling hills, medieval villages and carefully manicured vineyards – seamlessly integrating man-made structures into the natural landscape. 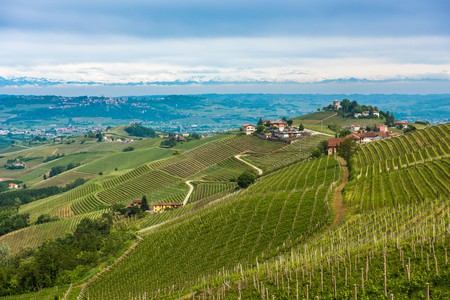 The entire island of Capri is a feast for the senses but its famous blue grotto is a truly mystical sight to behold. The vibrant blue hue that illuminates the cavern is caused by sunlight passing through a deep underwater cavity and shining back up through the water. The mouth of the sea cave is only a metre high, so visitors can only enter the Blue Grotto with small boats when the tide is low enough to permit entry. 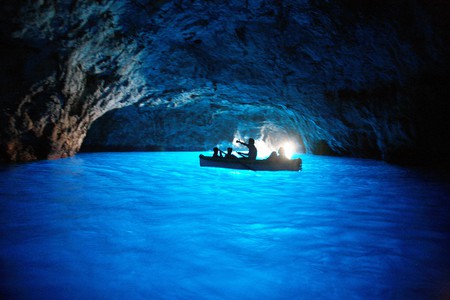 Rocca Calascio, a mountaintop fortress that dates back to the 10th century, resembles something you would see in Game of Thrones. In central Italy’s Appenine mountains, the fort was damaged during an earthquake in 1703, but this only adds to its mystic. The fort is incredibly dramatic, especially when set against Abruzzo’s snowy mountains in the background. 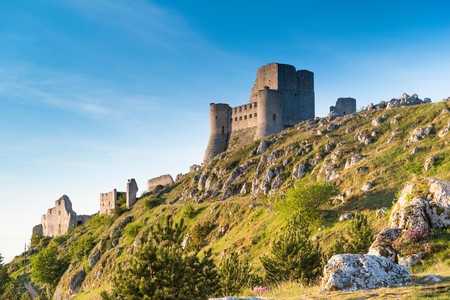 Lake Como, a glacial lake in Italy’s northern Lombardy region, has long attracted aristocrats, celebrities and affluent visitors to its shores. Shaped like an inverted Y, the town of Bellagio is located at the tip of the promontory and is considered the pearl of the lake. Lake Como offers views onto the Grigna Mountains and is dotted with prestigious villas such as Villa Carlotta and Villa del Balbianello. 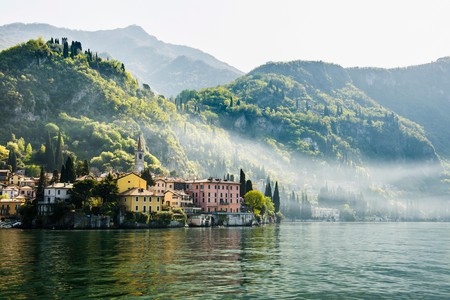 Sicily has numerous breathtaking islands, including the Egadi Islands as well as Pantelleria and Lampedusa, though the clustered Aeolian Islands are unique for their natural diversity. Comprised of Vulcano, Lipari, Salina, Panarea, Stromboli, Filicudi and Alicudi, each island has its own personality and unique terrain. Stromboli is particularly arresting for its small but regular volcanic eruptions, which are particularly evocative at nightfall. 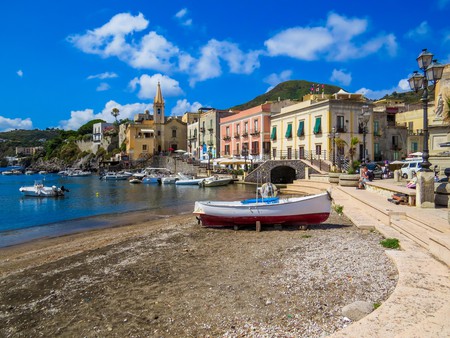 Images of Venice conjure up dreamlike scenes drenched in improbability, beauty and magic. Set in the Venetian Lagoon, an enclosed bay of the Adriatic Sea, Venice is actually comprised of more than 100 little islands and 400 bridges, with tourists and locals moving around the city by boat – making for a truly extraordinary sightseeing experience. 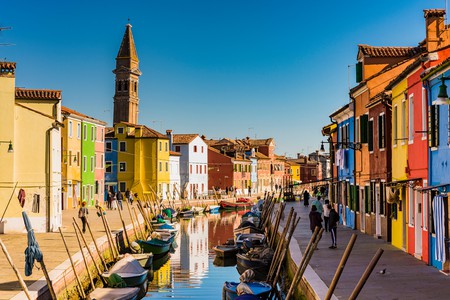 Few vistas are as idyllic and alluring as that of Italy’s Tuscan hills. Lined with cypress trees, textured with patchwork vineyards and dotted with rustic farmhouses, the Tuscan countryside is rural, manicured and serene, while its vibrant shades of green and yellow are a feast for the eyes. The Val d’Orcia, encompassing Siena, Pienza and Montalcino, is one of the loveliest parts of the region. 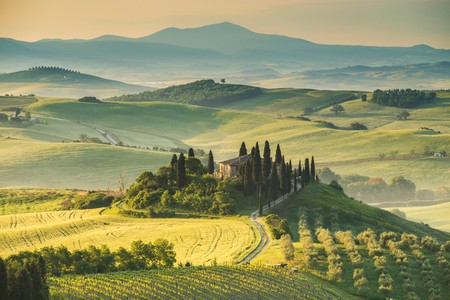 Sicily’s first protected area, the Zingaro Natural Reserve, is a 7km (4.3mi) stretch of terrain that combines land and sea to incredible effect. There are plenty of hiking trails that immerse you in the territory and provide beautiful vistas of pristine beaches and small coves. With a diverse flora and fauna, it’s a wonderful place to unwind in nature before taking a dip at one of the coastline’s many beautiful beaches. 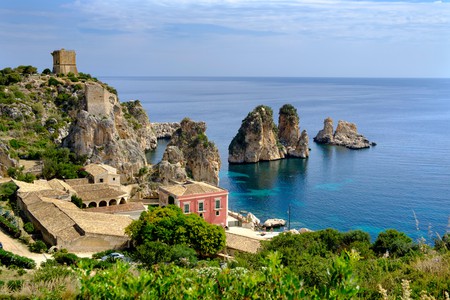 The landscaped Gardens of Ninfa are like a fairytale scene come to life. Described as “the most romantic garden in the world”, it is an evocative oasis that was created in 1921 in the English garden style and features thousands of exotic plants and trees, medieval ruins perfectly integrated into the natural landscape, a crystalline river with water fresh enough to drink, an ancient stone bridge and more. 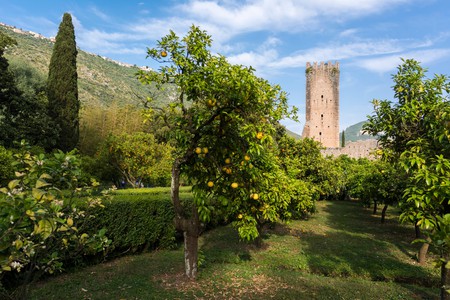 The Dolomites of northern Italy are a popular draw for skiing, mountain climbing, hiking and more. Comprised of sedimentary rocks and limestone, the mountain range was created about 250 million years ago and covers a span of 77,865 acres (315.11 km2). Marmolada is the highest mountain peak in the Dolomites, with an elevation of 3,343 m (10,968 ft). 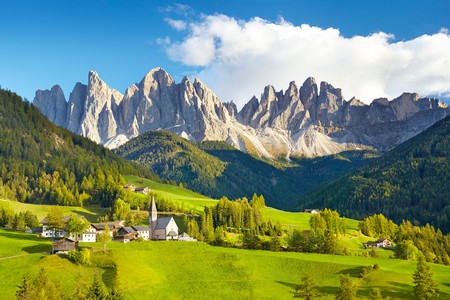 Travelers who venture to Italy’s southern Calabria region will be rewarded with unspoiled natural landscapes and crystal-clear waters along the Costa degli Dei, or Coast of the Gods. Encompassing Tropea, a hilltop town considered the region’s jewel, the coastline is famous for its white beaches, protected coves and shimmering turquoise water. 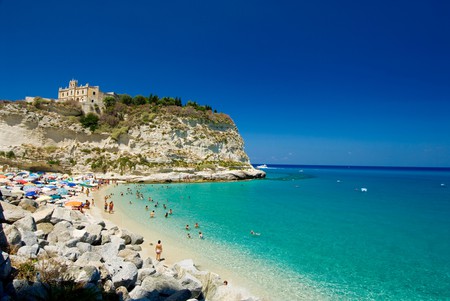 Tourists at the beach in Tropea on Calabria’s Costa degli Dei, Italy. | © Richard Broadwell / Alamy Stock Photo
Give us feedback