13 Things Tourists Should Never Do in Rome 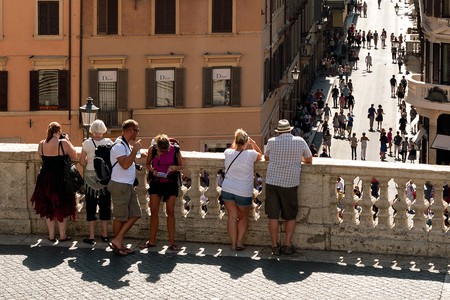 Tourists On The Spanish Steps | © cappellacci/Flickr

There are cultural expectations and traditions you are expected to heed anywhere you travel and Italy may have even more rules than usual. When it comes to dining, behavior in public, and transportation in the city, it helps to do research to ensure you have a smooth and enjoyable visit to the city. Curious about how much to tip? Hoping to avoid making faux pas? Read on to discover things you should avoid doing on a trip to Rome.

Mealtimes are sacred in Italy and Italians are infamous for lingering over long meals, both at lunch and dinner. Although street food is a popular concept that has popping up all over the city, you’re still expected to pull up a seat at a stool in the informal establishment, perch up at the bar while you eat, or take your order to go and find a seat on a bench in a nearby park. Italians don’t eat or consume beverages while walking in the streets and neither should you. Gelato is excluded from this rule. 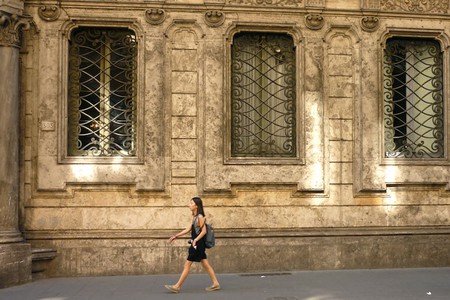 Walking on Via Del Corso | © cliffano/Flickr

That being said, when you’re seated at a restaurant, it’s common practice to begin eating as soon as your dish arrives, even if you’re the first one served. You can politely tell your dining guests that you’ll wait for them but this is just for the sake of demonstrating your good manners. Italians will always tell you to go ahead and start before it gets cold: eating food is a truly important social and cultural ritual and is meant to be enjoyed, so it’s best eaten fresh from the kitchen.

Don’t order a cappuccino after noon

This is arguably the most famous Italian food rule: don’t order a cappuccino after noon. Cappuccinos are considered a breakfast coffee and are often consumed first thing in the morning with a sweet pastry. After lunch, the high proportion of milk is thought to impede digestion and Italians are all about digestion. It’s the reason they order black coffee and digestivi – digestive liquors – after dinner. Digestion is of utmost importance and Italians believe drinking a cappuccino on a full stomach will be too heavy. If you need a splash of milk in your coffee, a caffe macchiato is acceptable at any hour of the day (though Italians will tell you the milk interferes with the true flavor of the coffee, which is best enjoyed black). 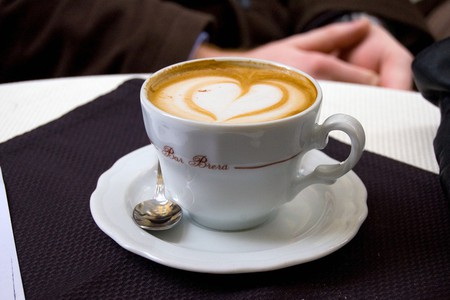 Don’t eat in the main piazzas

Rome’s mayor Virginia Raggi has just issued a ban against eating and drinking near the city’s famous fountains. That may sound harsh for a city with so much cultural heritage to be enjoyed out in the open but historical maintenance is expensive and the city needs to do all it can to help preserve its monuments for centuries to come. The Spanish Steps were recently restored by luxury Italian brand Bulgari, a project that cost €1.5 million euros, and Paolo Bulgari, its chairman, even suggested Rome set up a gate to inhibit ‘barbarians’ from sitting on its steps; the steps apparently were covered in litter and chewing gum. Dining is an experience that should be done at the table.

Because most restaurants are family-run, many are closed one or two days of the week in order to have a rest day, often Sunday or Monday but sometimes Wednesday. Double-check store hours before you pass by, as many are closed Monday mornings. Most museums in Rome are closed on Mondays, with the exception of the Colosseum and Vatican museums. And the post office is infamous for closing at odd hours such as 1:35 on weekdays (avoid the post office at all costs if you can). Rome doesn’t have a 24/7 mentality so make sure to do some research into opening days and hours.

Waiters and bartenders in Italy generally make normal salaries so consumers aren’t expected to chip in to help cover their wages. A cover charge, or coperto, is often included in the bill as well and covers the table bread that is readily supplied to the table and charged whether or not you consume it. Tipping is not based on a precise calculation but is usually rounded up and estimated depending on price, number of people in the party and level of service. A €46 euro meal could be rounded up to €50 while an €120 meal could be rounded up to €130 but there are no hard and fast rules about the amount. 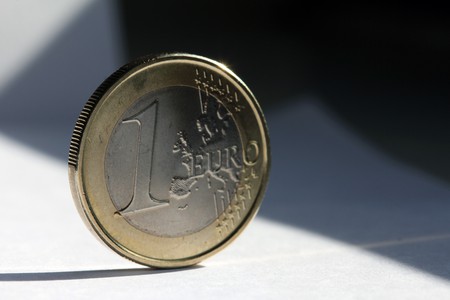 Don’t expect customer service to be 100%

A common complaint from American travelers to Italy is that the customer service is often substandard. For a number of cultural reasons, including lower wages and mobility, as well as the importance of leisure and time over productivity, customer service is not held in the same regard in Italy as it is in more commercially-minded countries. It is not taught to new employees with the same rigor as one would receive during work training in the United States and Italian customers and consumers are expected to fight for what they want, rather than expecting to receive it.

In that vein, don’t be afraid to ask for what you want or express your dissatisfaction. Italians are very communicative and expressive with their desires and infamous for nit-picking over the smallest things (it’s no surprise that they are masters of many arts, in part thanks to their fastidiousness). If a waiter brings you the wrong dish, let him know. If you see a line forming, don’t be afraid to ask for clarification on what’s happening or imposing yourself: don’t dilly dally at the back of the line. Assert yourself politely but firmly.

Italy is a land that prioritizes leisure, whether it is long summer weeks spent at the beach or a Sunday lunch with family. Don’t feel rushed to finish your meal and get on with your day – at many restaurants you can still order one course at a time and waiters will rarely present you with a bill until you ask. It’s not negligence, it just speaks to the slower pace of life in the country. Unless the restaurant is packed and hosts multiple seatings, you’ll be allowed to linger for as long as you like. 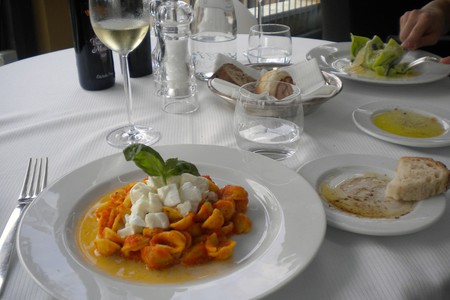 Italians pride themselves on decorum and on la bella figura, or the beautiful figure, so aesthetics and being put together are very important. If you would like to go running outside in Rome, it’s best to do it in a park, along the river, or early in the morning. Most importantly, you must be dressed appropriately when running through the center of the city. Police will stop you if you are running shirtless in public or wearing a very small sports bra. Like covering up in church, it is not appropriate to be half-naked out in the public streets.

Don’t lose sight of where you are

Rome is a relatively safe city but Italy is somewhat infamous for its pickpockets so keep your eyes out on public transportation and around tourist sites. Women should hold on to their purses when riding the metro or the buses and men should keep their wallets in their front pockets. Petty thefts are commonplace but tourists who look aloof are the most prone to being targeted. Demonstrate that you are aware of what is going on around you and you won’t face any problems in the city.

One of Rome’s biggest problems is its public transportation system: it is slow, unreliable and far from what you would expect in a capital city. You must buy bus tickets ahead of time at a Tabacchi in the city (tobacco store) and not directly on the bus, but the confusion doesn’t start there. Bus stops are not always intuitive so map out your route in Google before you leave wifi. Know that you may wait 30 minutes for a bus to show up so plan accordingly and leave early, limiting your changes on public transportation as much as possible. The metro and the trams are more reliable than the buses but frequent strikes bring transportation to a standstill. When all else fails, consider catching a ride with Scooterino! 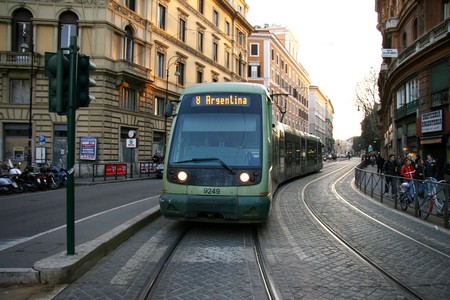 Don’t be afraid to strike up conversation

Italians are warm, gregarious people and love to speak, especially with foreigners. Don’t be afraid to ask questions, make comments and test your Italian with locals, especially at the coffee bar, at restaurants and in stores. Romans love to make international friends and are always eager to practice their English so it’s easy to make connections while you’re traveling.

Don’t stick to the beaten path

The charm of Rome lies in its tiny winding streets, hidden corners and unexpected surprises. Even within the touristy historic center, veering down a small alley can bring you far away from the masses and into a very local neighborhood. Trastevere, for instance, is known for being a haven for tourists and study abroad students, but the streets around the Santa Cecilia church (to the west of the tram line) are quieter and have a more authentic feel. Wander down to the end of Trastevere and you’ll find yourself in Monteverde, with a large majority of locals. There are plenty of neighborhoods further outside the center that are worth visiting for more Roman flair, such as Pigneto and Garbatella. Your adventurous spirit will thank you. 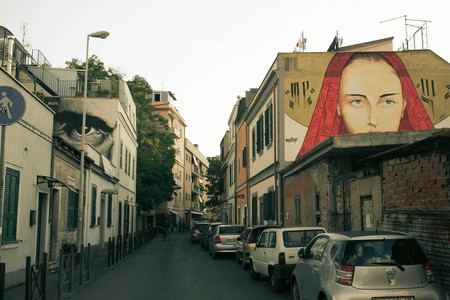 Pigneto | © badswan/Flickr
Give us feedback