Surreal Places in Italy You Have to See to Believe 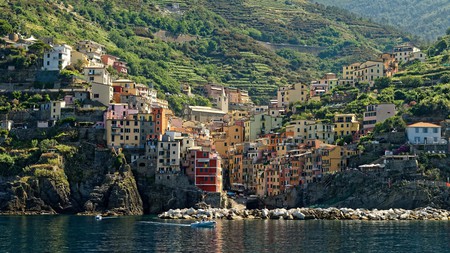 It’s a country blessed with stunning landscapes and steeped in artistic and cultural heritage, but if you seek to go beyond the tourist attractions, Italy also has plenty of more unusual sights. Here’s our roundup.

Join Culture Trip’s 10-day small-group Northern Italy trip – led by our Local Insider – to witness some of the most stunning spots in Italy, with ample opportunity to sample sumptuous cuisine along the way.

This picture-perfect town in northern Lazio is a fairy tale come to life. Perched on a tufa rock hill in the Tiber River Valley, it was founded by the Etruscans 2,500 years ago but over the centuries was largely abandoned due to its friable terrain slowly eroding, earning the town its nickname la città che muore (the dying town). The Civita is connected to the mainland by a footbridge and famously has fewer than 15 residents year round, though tourism is thriving thanks to its position and charm. 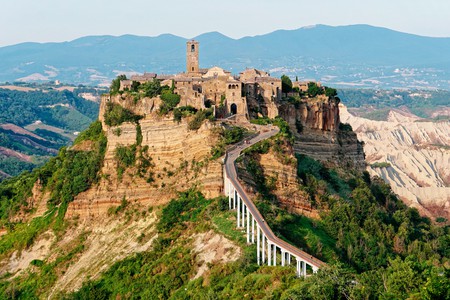 The fabled Cinque Terre (five villages), are cliffside fishing towns located in the northwest region of Liguria. They comprise Riomaggiore, Manarola, Corniglia, Vernazza and Monterosso al Mare, each of which has its own unique history and charm. Although they are all stunning in their own way, Vernazza is often touted as the loveliest town for its quaint, photogenic harbour. Interested in visiting? Culture Trip’s 10-day Northern Italy tour includes an unforgettable guided hike along the Cinque Terre coastline. 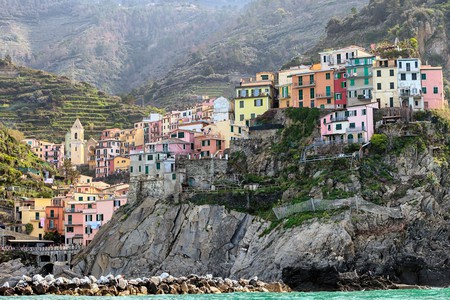 Manarola is one of the Cinque Terre, in Liguria | © Joana Kruse / Alamy Stock Photo

Reschensee, in the Italian Alps, is a man-made lake that’s known for the steeple sticking out of the water. It belongs to a 14th-century church, which was submerged when the lake was created in 1950: a dam was put in place by an electricity firm in order to generate seasonal electricity, and a number of towns, including Graun and Reschen, were flooded in the process. The church steeple is all that remains visible and can be reached on foot when the lake freezes over in winter. 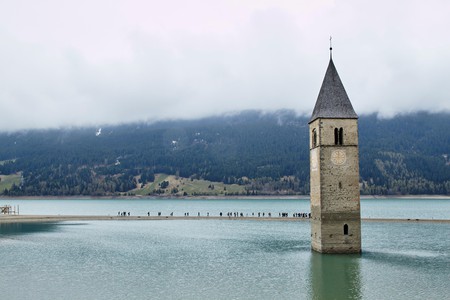 Reschensee, a manmade lake, has a 14th-century steeple sticking out of the water from when the town was flooded in 1950 to build a dam | © FREEDOM_WANTED / Alamy Stock Photo

Puglia‘s conical trulli, reminiscent of hobbit homes set in a fantasy world, were constructed as dwellings and storehouses in the 19th century. The distinctive roofs are made of limestone, arranged in a tilted fashion so they are waterproof, then topped with a closing stone. Most trulli have one room beneath each roof and additional rooms in arched alcoves within the structure. 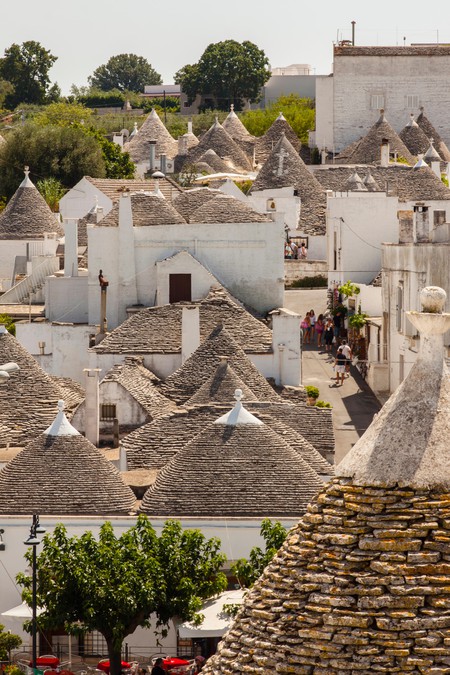 The Grotta della Poesia (the Cave of Poetry), is a water-filled sinkhole on the Adriatic Sea in Puglia. According to legend, it was the favourite watering hole of an ancient princess and the sight of her swimming there inspired poets to write about her. Today, it is mainly used for cliff jumping and scuba diving, thanks to its crystal-clear water, underground caves and natural scenery. 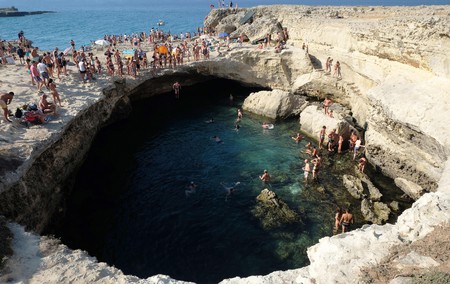 The Scala dei Turchi (Stair of the Turks) is a tiered cliff in southern Sicily, made of soft limestone and white marl – a sedimentary rock. This stretch of coastline has withstood millennia of lapping ocean waves and salty breezes that have created natural steps on the cliff, giving the formation its name. It is also named after Turkish pirates who invaded Sicily numerous times over the centuries. 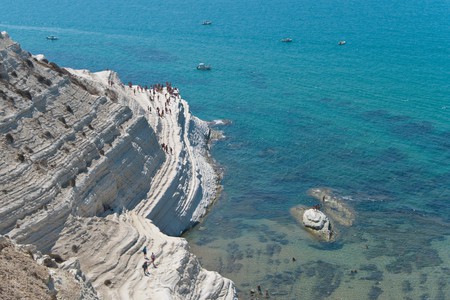 Sammezzano, a stately palazzo near Florence, was built at the beginning of the 17th century by a Spanish nobleman, Ximenes of Aragon. An extensive property with 365 rooms, it is notable for its Moorish revival architectural style and Arabesque decorative details. The prismatic Peacock Room, featuring intricate patterns and colours, is one of many highlights of the castle. 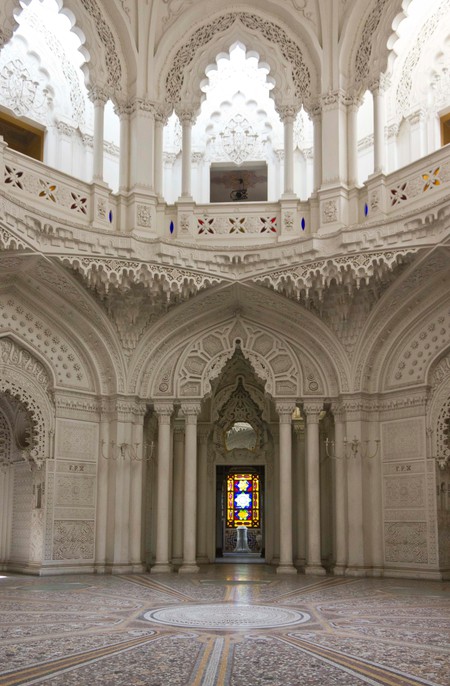 Arriving at the landscaped Gardens of Ninfa, you may feel as if you’ve stumbled upon a secret world of nymphs and fairies. Described as the most romantic garden in the world, this evocative oasis, created in 1921 in the English garden style, features thousands of exotic plants and trees, medieval ruins integrated into the natural landscape, a crystalline river with water fresh enough to drink and an ancient stone bridge. 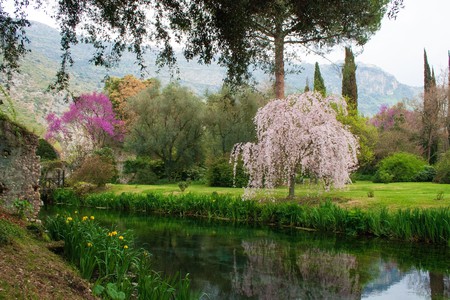 Once considered the shame of Italy, Matera is now one of its pride and glories. The ancient city is comprised of hundreds of Sassi (stone dwellings) that date back to prehistoric times when the country was full of troglodyte settlements. These homes were dug out of the calcareous rock and hollowed out to create rooms for entire families to reside in. The evocative city has often been used for filming and represented ancient Jerusalem in Mel Gibson’s The Passion of the Christ (2004). 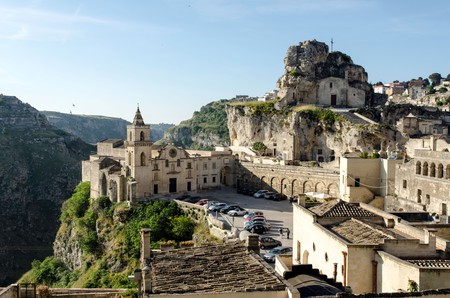 Rocca Calascio, a mountaintop fortress in the Apennine mountains in central Italy, dates back to the 10th century and resembles something you might see in Game of Thrones. The fort was damaged during an earthquake in 1703 but this only adds to its mystique. It’s quite a dramatic sight, especially when set against the snowy mountains of Abruzzo. 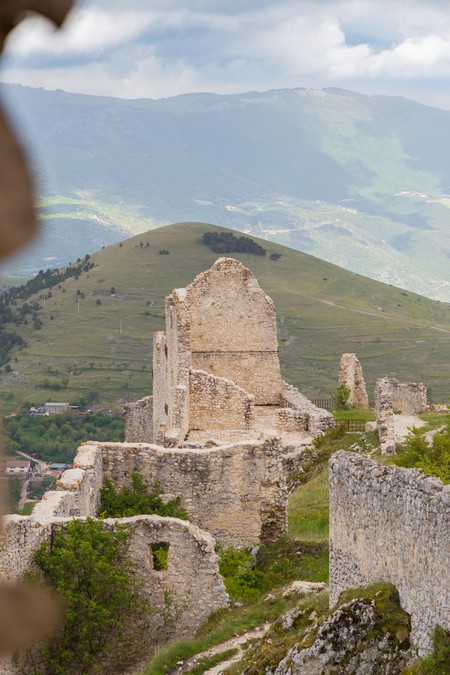 Inside the impressive Frasassi caves, a karst cave system with stalactites and stalagmites, the Tempietto del Valadier is a neoclassical temple tucked into a sanctuary-cum-chapel. Built in 1828 by the Italian architect Giuseppe Valadier, it echoes the Tempietto del Bramante he designed within the San Pietro in Montorio church on the Gianicolo Hill in Rome. The temple is intended as a pilgrimage site where sinners can seek forgiveness. 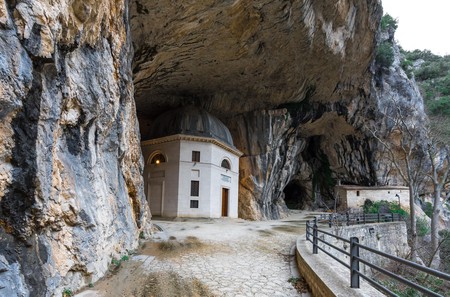 The entire island of Capri is a feast for the senses, but its famous Blue Grotto is a truly mystical sight to behold. The blue that lights up the cavernous rock formations is caused by sunlight passing through a deep underwater cavity, then reflected back up through the water. The mouth of the sea cave is only 1m (3ft) high, so you can only enter the Blue Grotto by a small boat when the tide is low enough. 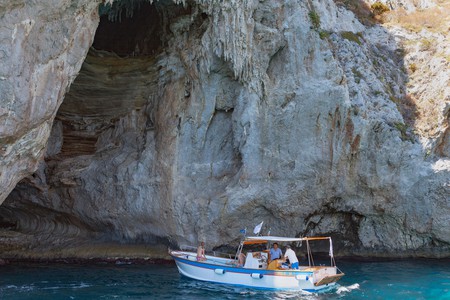