Experiences You Can Only Have in Italy 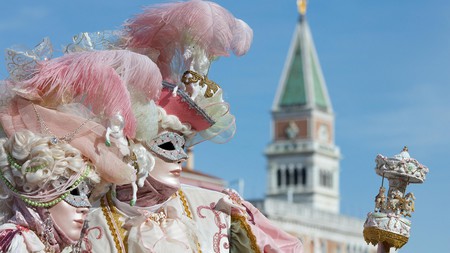 Attending the Venice Carnival is a an extraordinary, once in a lifetime experience | © JLBvdWOLF / Alamy Stock Photo

With more Unesco World Heritage Sites than any other country, some of the world’s finest art and architecture, a sensational range of natural landscapes and a cuisine worth piling on the pounds for, there’s plenty to see and do in Italy. Here’s just a taster of unique experiences that can only be had in the bel paese. 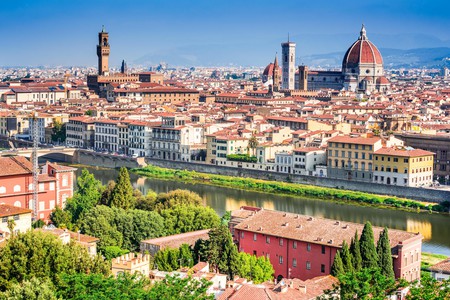 As the cradle of the Renaissance, Florence is packed with artistic masterpieces to admire – which you can do on Culture Trip’s specially curated 10-day Northern Italy adventure. From Michelangelo’s David to Botticelli’s Birth of Venus and Brunelleschi’s dome atop the Duomo, every corner of the city is rich with art and architecture. Florence’s store of cultural wealth is so overwhelming, there have even been cases of visitors to the city suffering dizziness, sweating, tachycardia and fainting. Stendhal Syndrome, also known as Florence Syndrome, can cause those with a deep emotional connection with the artworks to find themselves overcome with emotion and fall ill.

Stay in a trullo in Puglia 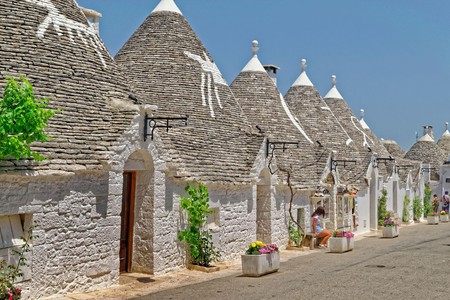 Trulli are conical roofed huts exclusive to the Puglia region in southern Italy. These charming structures were mostly built in the 19th century as storehouses and small dwellings for the rural population. Usually built from local limestone, and then closed with outer stones, the trulli’s distinctive coned roofs are sometimes painted with different religious symbols to help protect the occupants within. Spending the night in a trullo is a unique way to experience the sun-drenched heel of Italy. 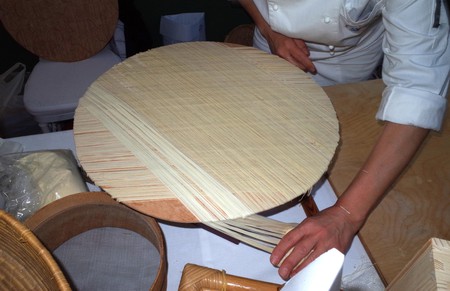 Su filindeu, meaning ‘threads of God’ in Sardinian dialect, is a semolina pasta dough, stretched and folded into precisely 256 strands and then placed on a circular frame in three overlapping layers. The incredibly thin noodles are dried in the sun then cooked in mutton broth before pecorino cheese is added to make a wholesome soup. Making the pasta requires an expert hand, so much so that reportedly only three people on the planet still prepare it. 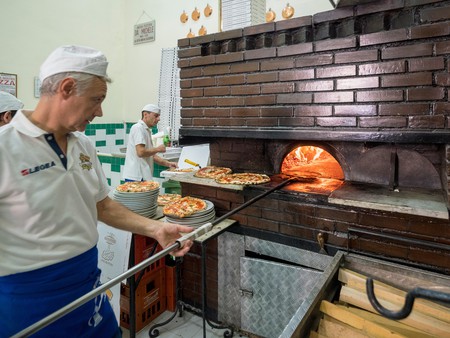 There’s no better place to eat pizza than in its birthplace of Naples. Locals argue over which pizzeria serves up the best pie, but many head to L’Antica Pizzeria da Michele for their fix. With only two options on the menu at this no-frills restaurant, marinara (tomato, oregano and garlic) or margarita (mozzarella, tomato and basil), forget about the topping-loaded pizza of other countries and enjoy authentic Neapolitan pizza cooked with the same recipe since 1870. 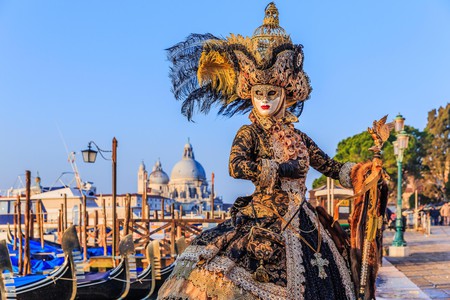 Venice Carnival may originate as a celebration of a 12th-century military victory, but these days it’s all about the parades and the parties. The most exclusive party is Il Ballo del Doge, the Doge’s Ball, which is held every year at Palazzo Pisani Moretta. Every year this historic palazzo hosts the festival’s most lavish and luxurious masquerade ball, with around 400 VIP guests in attendance.

Go to mass at one of the world’s oldest churches 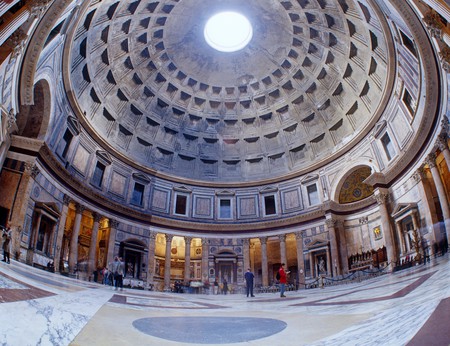 Considering it’s almost 2,000 years old, the Pantheon in Rome is in excellent shape. Although it was originally built as a temple to the gods (the names derives from the Ancient Greek Pantheon, meaning ‘all the gods’), the building is still in constant use as a Catholic church. Seeing mass in this incredibly well preserved site or marveling at the concrete dome (the world’s largest) and its oculus is a spiritual experience that can’t be matched. 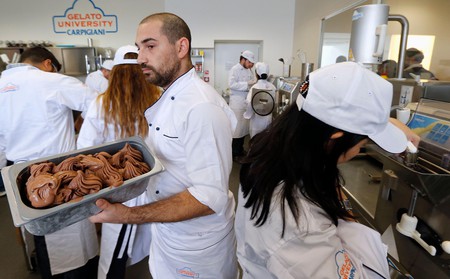 After tasting Italy’s most popular dessert, it’s time to learn how to make it. For a masterclass in artisanal gelato, enroll in Carpigiani Gelato University, just outside Bologna. Founded by gelato equipment brand Carpigiani in 2003, courses vary from how to make vegetarian gelato to everything you need to know to open your own gelateria.

The Dora Sarchese vineyard in the Abruzzo region put its tiny town on the map in 2016 with the installation of a 24-hour red wine fountain. Located in Caldari di Ortona, the fontana del vino was created to promote the nearby pilgrimage route of Cammino di San Tommaso. Along with thirsty pilgrims, anyone is welcome to partake in a glass for free, well, anyone besides ‘drunkards’ and ‘louts’ according to the vineyard’s Facebook page. 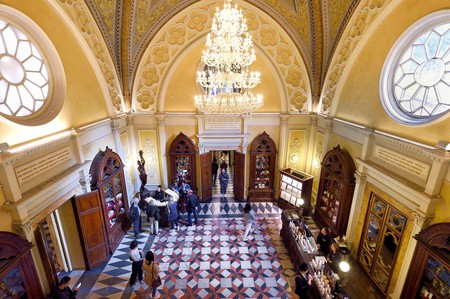 In 1221, Dominican monks in Florence were concocting elixirs, herbal remedies and homemade medicines – at this point, the city’s most famous residents, Dante and Giotto, hadn’t even been born yet. Although, these days, customers are less concerned with warding off the plague and more interested in the modern-day colognes and skin care products. Some of these traditional potions can still be found on the shelves of Santa Maria Novella Pharmacy today.

Fly between the two towns of Castelmezzano and Pietrapertosa 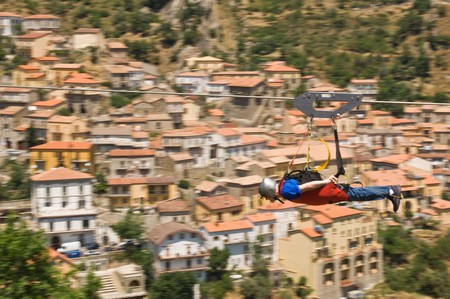 Il Volo dell’Angelo, or the Flight of the Angel, is a zip-wire which allows thrillseekers to soar between two towns in the picturesque mountains of Basilicata. Fliers are strapped into a horizontal harness before being launched down the zip-wire at speeds of up to 70mph. While zip-wires are nothing new, Il Volo dell’Angelo offers a unique way of seeing the region, one that the owners are keen to keep to themselves; they’ve reportedly obtained the exclusive rights for this kind of project in Italy.

Drink coffee in a cafe designed by Wes Anderson 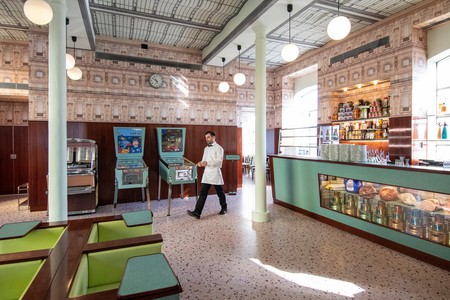 Located in the Fondazione Prada complex in Milan, Bar Luce is a pastel-coloured paradise for Wes Anderson fans. Complete with retro Formica tables, a vintage jukebox and even a Steve Zissou-themed pinball machine, Bar Luce is a tiny corner of the Wes Anderson universe brought to life. The cakes may not be from The Grand Budapest Hotel’s Mendl’s bakery, but who cares when the mise-en-scène is this good? 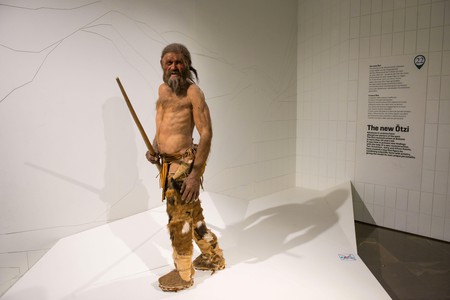 Discovered in 1991, in the Ötztal Alps on the border between Austria and Italy, Ötzi the Iceman is a 5,300-year-old natural mummy who now resides at the South Tyrol Museum of Archaeology in Bolzano. Ötzi is one of the world’s most studied individuals, and his body has provided great insight into what life was like in the Copper Age – which, judging by the head injuries and arrowhead lodged in his shoulder, was hard. His tattoos, thought to be an early form of acupuncture, are also the world’s oldest.