11 Things You Didn't Know About the Roman Forum 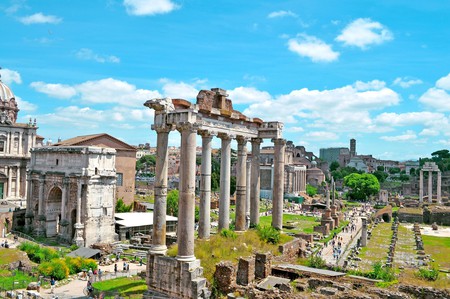 Filled with grandiose temples, bustling marketplaces and imposing civic buildings, the Forum was the beating heart of ancient Rome. Originally a swampy Etruscan burial ground, the site was drained in the 7th century BC and grew into a monumental demonstration of the power and splendour of the Empire. Today, the Roman Forum lies in ruins but is no less compelling for it – as attested to by these 11 interesting facts.

Located in the small valley between the Palatine and Capitoline Hills, the site was originally low-lying, grassy wetlands – not ideal foundations for temples and basilicas. Only after the construction of the Cloaca Maxima around 600 BC did any real development take place. This large sewage system drained waste into the Tiber and its outfall into the river is still visible today next to Ponte Palatino.

It’s home to the tomb of Romulus

The story of Romulus, who founded Rome after killing his twin brother Remus, is a tangle of myth, legend and folklore, so whether or not a real, historical figure ever existed is unclear. Believe the ancient Romans, though, and Romulus is buried in the Forum. The Lapis Niger, a large piece of black marble, marks his grave – that, or the spot where he was murdered by the Senate.

The Vestal Virgins lived there

Vestal Virgins were chosen as priestesses between the ages of six and ten, and sworn to celibacy for 30 years. It was their duty to keep the sacred fire in the Temple of Vesta burning. The fire was believed to be linked to the fortunes of ancient Rome, so punishment was severe if it ever went out – vestals who neglected their duty would be beaten or flogged. Those who broke their vows of celibacy were buried alive.

Statues outside the House of the Vestals | © Bradley Weber / Flickr

Julius Caesar was cremated there

The Temple of Caesar, built after the politician’s assassination on the steps of the Theatre of Pompey, is sometimes referred to as the site of Caesar’s grave, but is actually the spot where he was cremated in 44 BC. Now, the temple is in ruins but people still leave flowers and tributes behind in honour of Rome’s most famous citizen.

The Senate met at the Curia Julia

The Curia was the original seat of the Roman Senate. It was from this building that consuls, tribunes and praetors made administrative decisions about the running of the Republic and Empire. The Curia Julia, the third Senate House, is in good shape today, thanks to its conversion into a basilica in the 7th century and extensive reconstruction in the 1930s. 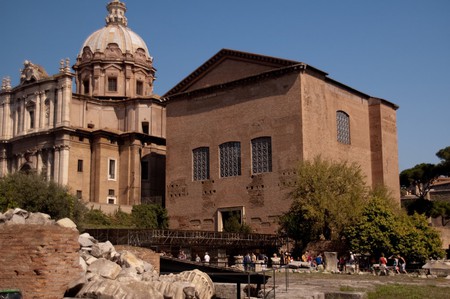 You can visit it using your ticket to the Colosseum

Aside for the Colosseum, the €12 entrance ticket also includes admission to the Roman Forum and the Palatine Hill, which are located right next door to each other. The ticket is valid for two days and, as queues are often shorter at the Roman Forum, it’s worth buying it there to save time.

The state treasury was kept in the Temple of Saturn

The Temple of Saturn, recognisable by its eight surviving Ionic columns, is one of the Forum’s most iconic structures. Traditionally dated to 497 BC, the temple was dedicated to the god of wealth and held the Roman Republic’s reserves of gold and silver, as well as the state archives. 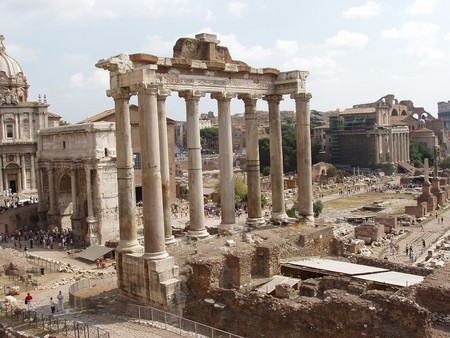 The Temple of Saturn | © danalh / Pixabay

Severed heads were on display

During the late Republic, violence during public meetings became increasingly common, and the Rostra – a platform where magistrates and orators would address the people of Rome – was used to display the heads of defeated political enemies. Cicero was among those who met this cold-blooded fate; his head and hands were turned into a public spectacle here by his adversary Mark Antony in 43 BC.

Caracalla had his brother’s name removed

Built in 203 AD, the Arch of Septimius Severus celebrates the victories of Emperor Septimius Severus and his sons, Caracalla and Geta, over the Parthians. After Severus’ death in 211 AD, the brothers became co-emperors. It was an uneasy arrangement and one that ended in Caracalla ordering the assassination of Geta, followed by the removal of the latter’s name and image from the family arch. 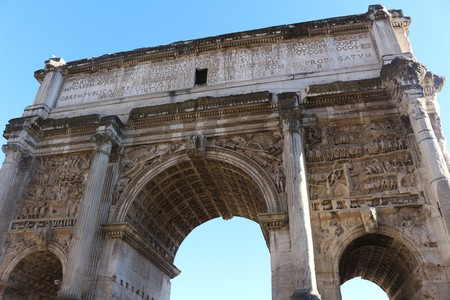 The largest building was the Basilica of Maxentius

The last major expansion of the complex was the Basilica of Maxentius. Completed by Constantine in 312 AD, it was also the largest building on the Forum, measuring approximately 100 metres by 65 metres (328 feet by 213 feet). Today, all that remains of the basilica is the north aisle, which features three concrete barrel vaults with octagonal ceiling panels.

During the Middle Ages it was known as the ‘Cow Field’

After the fall of the Empire, the Roman Forum fell into disrepair and many of its monuments were either plundered for stone and marble, or buried under debris. Eventually, this neglected piece of land became pasture for livestock and earned the nickname Campo Vaccino, or Cow Field. It was only in the 18th and 19th centuries that the site was first excavated.