Where to Go Seal Spotting in Ireland 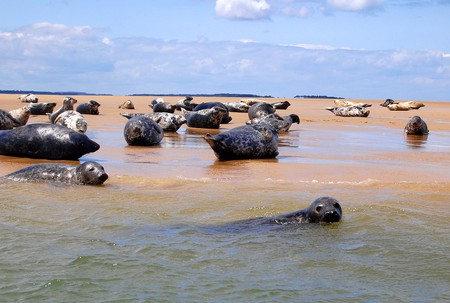 Sealife might not be the first thing you think of when you consider visiting Ireland, but with basking sharks common in our waters, whale-watching off the south and west coasts and a harbour with a resident dolphin, there are glorious reminders that you’re on an island if you care to look for them.

It’s not all about Fungi the dolphin and climbing the soaring cliffsides, though. There’s also a massive seal population, occupying anywhere from the heart of the capital‘s coasts to tiny rural corners, and they’re great fun to spend time with. It’s worth noting that you’ll have a reasonable chance of seeing seals in almost any east coast harbour, and quite a few on the west coast. But we’re here to be a little more helpful than that. Here are the best places to get close to our flipper-flapping friends.

The county town of Wexford, which shares the region’s name, has plenty to offer, from tiny streets that look like pirate-smuggling-contraband alleyways to a burgeoning restaurant scene. The town has a massive harbour with sandbanks near its entrance, and locals have long run boat trips to see the abundance of local seals. And we do mean abundance. There are hundreds of the things popping their heads up next to the boats, or fighting loudly over the best spot on their sandy residence. You can get extremely close on the boat, though they rarely come right to the town’s sea walls. Naturally, you should polish off the day with the town’s sublime seafood, where you might meet Sammy, a brave seal who’s learned to scrounge from a local restaurant.

This popular peninsula on the outskirts of Dublin city to the north is probably the easiest seal-exploring option for most visitors, and a great stop-off generally. As a modestly busy fishing port, seals gather in Howth harbour to scrounge scraps from the fishermen (one has even learned to wave at tourists), as well as fish for themselves. Walk any of the harbor walls, and on most days you’ll bump into a handful bobbing around. There’s also a spectacular cliff walk, lots of top seafood restaurants serving food straight from the boats and a number of themed boat trips running from the harbour.

Along with rugged Kerry seascapes, the beautiful landscapes of coastal west Cork are absolutely essential to any long trip to the Emerald Isle and offer one of the best places to explore whales, dolphins and basking sharks, as well as seals. There are ample boat trips, with grey seals and common seals in absolute abundance here. They are regularly seen around the rocky coastlines of Garinish Island, Baltimore, Clonakilty and Kinsale. If you get the chance to take one of the tours (and it’s not raining, which can make them cold and unpleasant, as well as restricting visibility), you should, as they’re a great introduction to the abundant local seabound wildlife.

Or more specifically, on the road out of Enniscrone towards nearby Ballina. The River Moy, which flows through Ballina and hits the sea along the road to Enniscrone, is famed for both a large concrete hull abandoned there and its salmon, and it’s the fish that draw in the seals. There’s a small colony living around the coastal road that are fairly easy to track down and watch from a car window as they lounge on the banks. While you’re here, be sure to check out the seaweed baths and walk the several kilometres of gorgeous beach at Enniscrone’s seafront.

A little outside of Wexford Town, the Irish Seal Sanctuary is a great place to get really close to seals, with the popular charity serving as a sanctuary for the majority of the country. While you can get within a metre or two of the animals, it’s worth noting that the centre is a working veterinary hospital of sorts, and some of the seals are in quite serious conditions, meaning it’s not always the heartwarming experience you might hope for. It is, however, a wonderful organisation and a great glance at the character of wild seals and their interaction with humans, as well as to gain an understanding of the animal’s lives and the issues they face.